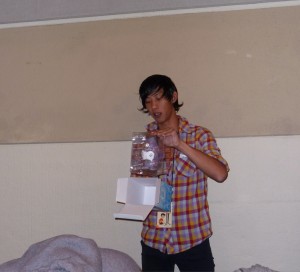 One of the most frequently asked questions about Baby Tattooville is “what do we get out of it?”Â  As our readers, you all have seen our coverage of some of this “loot” already, but over the next several weeks, AM will try to answer this question in more detail.

The enigmatic Thomas Han turned out to be one of the surprise guests that showed up at the event this year and he did not come empty-handed. He along with Munky King (one of the sponsors) gave out one of his glow-in-the dark Animal Pushers to all the attendees. This limited figure is probably one the most recognizable characters in his work.

Thomas gave a little talk about his Pusher as well as hung out with participants throughout the weekend enthusiasticly giving out sketches.Â  Arrested Motion had a chance to have a brief chat with often-maligned Han about his plans for the future including a solo show at Corey Helford Gallery coming up next year.Â  We have plans to interview him in the near future and hopefully give him a chance to answer some questions about his art, rumors, and plans for the future.