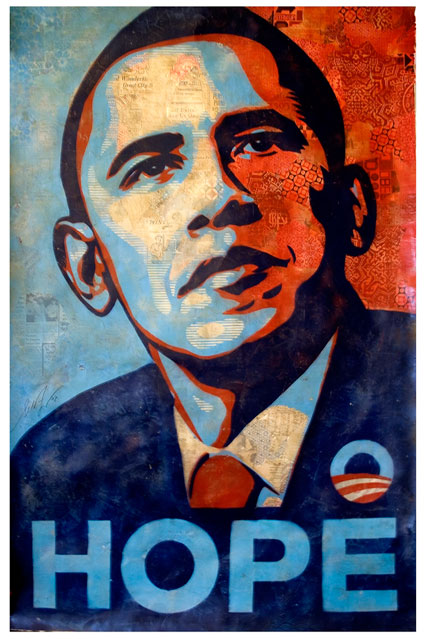 Influential street artist Shepard FaireyÂ has been aÂ cornerstone of the US urban art scene for more than a decade, but his influence trancended mere street artÂ after he created an image of Barack ObamaÂ so powerful, that it became the image that symbolized Obama’s presidential campaign. How fitting that the LA based Fairey will come to Washington DC to speak about the social and political issues that have influenced his art work.

The famous Corcoran MuseumÂ will hold a symposium with Shepard Fairey and Al Farrow. Both artists will be attending the reception that follows the discussion.

The following day (Oct 18th), don’t miss Shepard’s show at Irvine Contemporary. AM will be posting a preview of this shortly!

More details after the jump

“Internationally celebrated contemporary artist and graphic designer Shepard Fairey has always marched to the beat of his own drum. Known for creating eye-opening artwork which focuses on provocative social and political themes, Fairey has become one of the worldâ€™s most influential street artists. His most recent work, â€œHope,â€ a stylized, three-color print of Barack Obama, quickly became one of the most iconic images of the 2008 presidential campaign. Acclaimed contemporary sculptor Al Farrow continues to push the envelope with his artwork. Exhibited in major museums throughout the world, his striking sculpturesâ€”made from gun parts, bullets, and human boneâ€”evoke themes that challenge the status quo and question widely accepted social norms. Shepard Fairey and Al Farrow discuss their innovative work and reflect on the social and political issues that inspire them to create.Â Sarah Newman, curator of contemporary art, Corcoran Gallery of Art, moderates.Â A reception follows the program.
Both artistsâ€™ work will be featured in the politically charged exhibition, Regime Change Starts at Home, with works by Paul D. Miller (DJ Spooky),on view at Irvine Contemporary, October 18â€“December 6, 2008. ” via Corcoran Museum