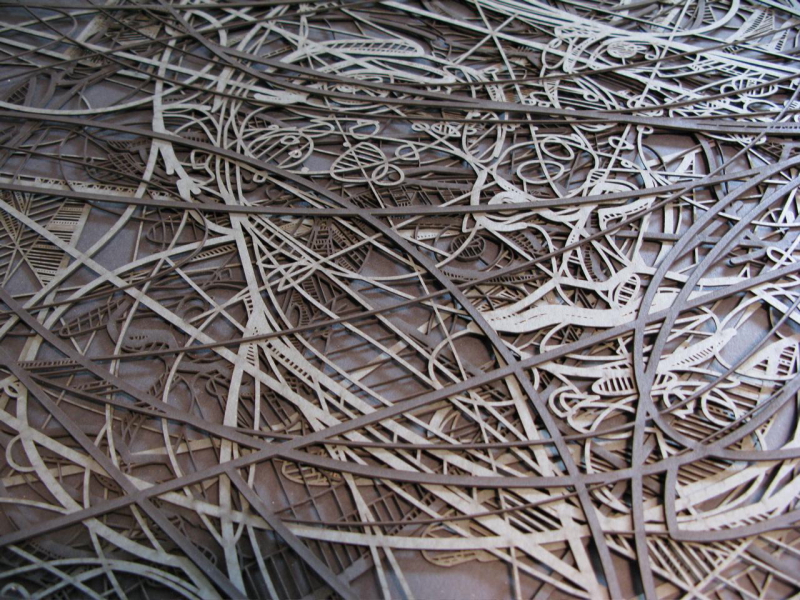 On our recent trip to Denver to see Josh Keyes’ “Sprout” exhibition, AM met with Jason Thielke, who’s latest solo show entitled simply “New Works” opens this Friday, July 17th at the new downtown location of the David B. Smith Gallery. We’ve been interested in Thielke’s work for a while now, and in particular his technique utilizing a method he calls gel transfer, which results in an aesthetic delight of super-clean vector-like line work.

Recently, he has changed things up a bit and is now employing a combination of paint and laser etching to create his stunning imagery alongside his more familiar use of gel mediums. Read on for an interview with Jason, and some photographs of the work in progress from his studio after the jump… 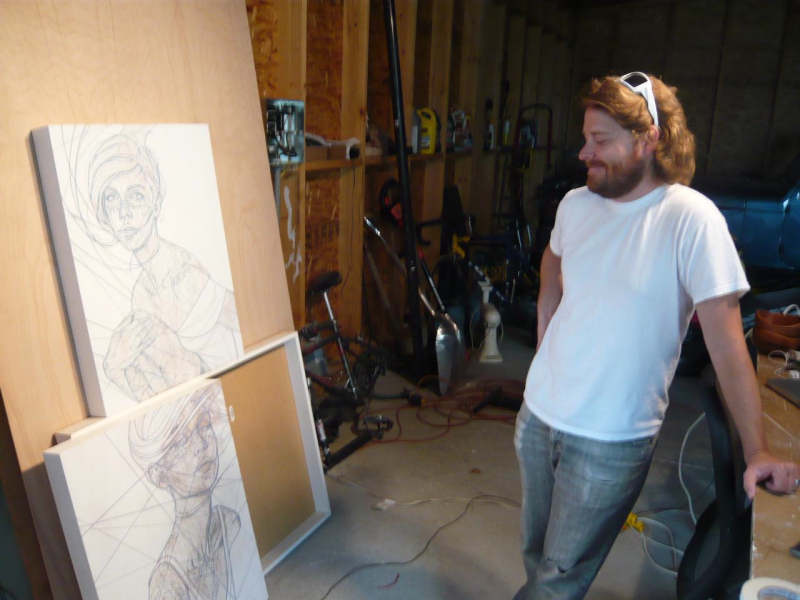 Arrested Motion (AM): To start off, can you tell us a little about Jason Thielke and the early years of your career as an artist?

Jason Thielke (JT): Well my first grade teacher, Mrs. Ghan, bought me a pack of markers because she thought I’d be an artist some day. In art school, I switched my emphasis from drawing to illustration because I wanted to learn how to accurately draw. I moved to Colorado after school and bounced around a few illustration and graphic design jobs. Early 2004, I decided to get serious about fine art. I got a studio in downtown Denver and joined a local co-op. I had a pretty successful show in 2005 and decided to pursue fine art full time.

AM: The techniques you use to produce your work involve the use of gel medium to transfer an image onto the board. What it is that you aim to articulate using this method instead of more “traditional” painting techniques?

JT: Well, the main reason I like doing image transfers in because of the line quality that I’m able to achieve. In comparison, I’m just not as good a painter. 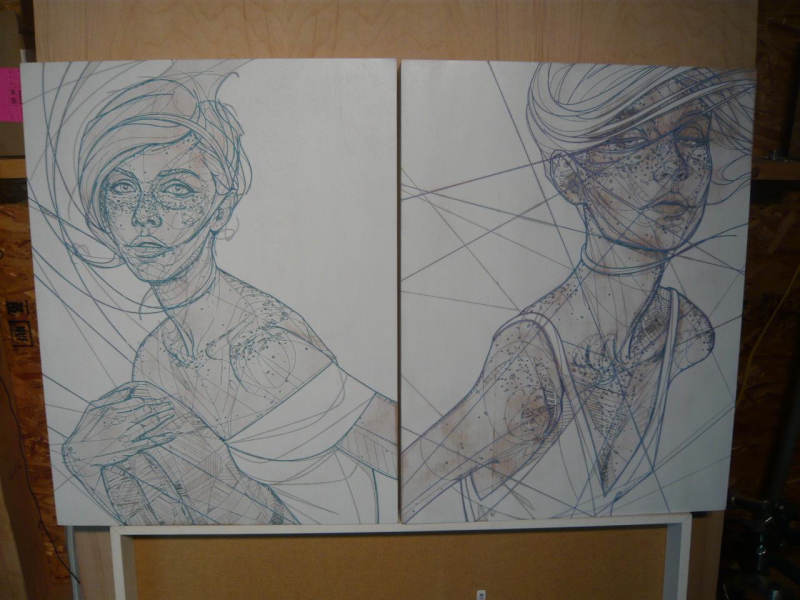 AM: Tell us how you have honed your skills with gel medium over the years?

JT: My first transfers were pretty sad, in my opinion. This seems to be the case for most people that attempt using the technique. I guess practice has made perfect. My technique has evolved throughout the years and I’ve experimented with about every medium made, figuring out what works best for me.

AM: Some of your most recent work, including that which will be featured at the upcoming David B Smith Gallery show involves the image being laser etched into the wooden panel. Can you tell us the reasons for you deciding to take this path with the newer work?

JT: Yes, I’ve switched to laser etching. Besides being sick of answering, “What exactly is gel transfer?” I’ve switched because I think the results are superior. Less tiled images, no more residue, and it doesn’t get much more permanent than wood that’s been etched into. I was actually inspired by Chinese wood reliefs. They were originally painted with lacquer, which has since disappeared but, of course, the carvings remain. 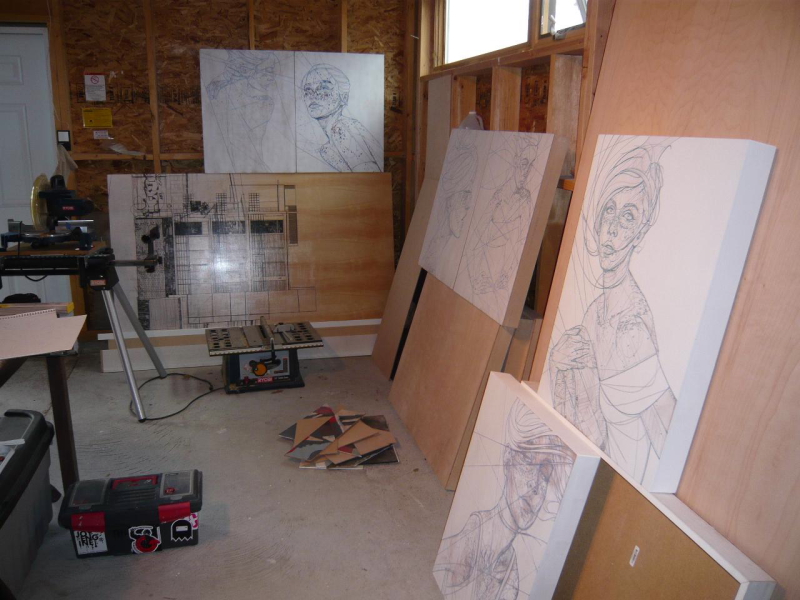 AM: Certainly, your style of mark-making is instantly identifiable as your own. Is there any one over-riding influence on your work that may have shaped the way that you create?

JT: Well, I did not know it at the time, but two distinct exercises that I did in school were the basis for my style. In high school, I was given an assignment to draw a self-portrait using line shape and different hatching techniques that we had been practicing. In art school, my professor had us execute several highly detailed black and white line illustrations for a semester or two, before moving on to painting. Also, living in Sicily exposed me to Greek and Roman line drawings, which were regularly executed in negative, meaning white or colored line on black.

AM: We’ve seen some of your previously editioned work using the giclee medium; we think that the super-clean lines that you create would be reproduced well in the form of silkscreen printing. Do you have any plans for this type of outlet in the future?

JT: Maybe, but no immediate plans. Silkscreen is a challenge for my line work because it’s so fine. I’ve done two silkscreen prints. They turned out okay, but not nearly as well as giclee prints. 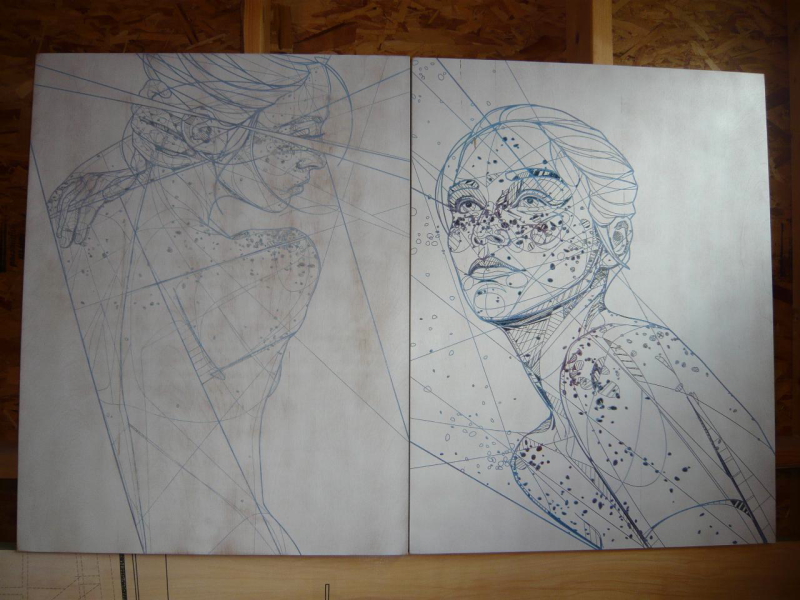 AM: You are a full time artist, and father of 2 children. Give us a picture of how you manage your whole work / life balance? Do you have any kind of daily routine?

JT: Well, I’m not sure that I have a balance yet. This is still a work in progress. When Jaden came along, I was shocked at how much my workflow was interrupted. I use to work 12-16 hours straight. Those days are over unless I’m under extreme deadlines. I’d say I’m not balanced yet because I’m either spending too much time enjoying family life and neglecting my work or vice versa. Laura and I just had a baby girl, Willow, so there will be more adjustment I’m sure. It’s all worth the effort, I must say. As for routine, I tend to work in the afternoon, which is Jaden’s nap time, and work at night.

AM: Do you have any kind of rituals or superstitions you observe when either making work or opening a show?

JT: No rituals or superstitions. I seem to work best under pressure though.

AM: You built your own studio last year. How has this changed the way you work? Which force is dominant in your studio – order or chaos? Do you tend to work on a single piece at a time from beginning to end, or will you be working on multiple pieces at different stages all at once?

JT: Well, it gets me outside the house, which is nice. My old studio was in a 10 x 10 room so now I’m much less cramped. The studio isn’t finished though, so it is an unorganized mess at the moment. I work on multiple pieces at once. Otherwise, I tend to get into a rut and am less productive – gotta keep it fresh. Working on several works at once also helps with cohesion. 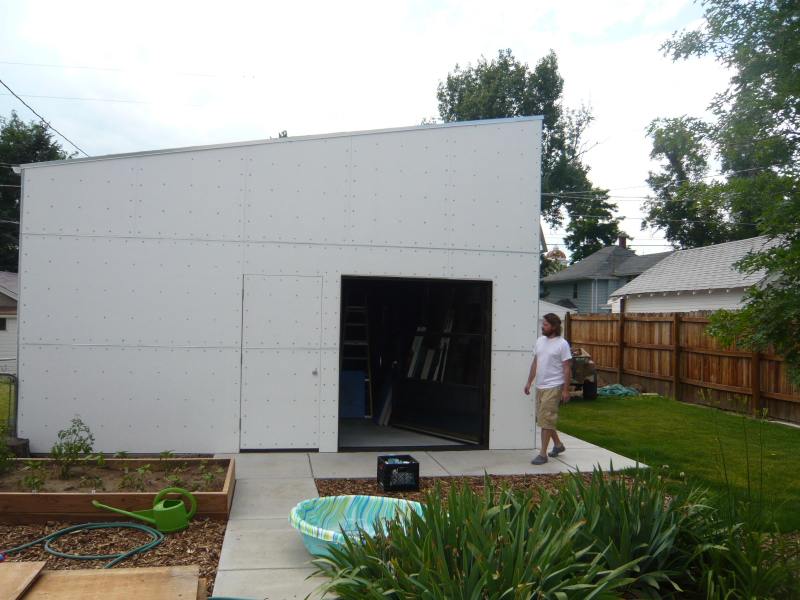 AM: We’ve previously likened “bodies” of work to albums, and individual pieces as “compilation tracks.” Does this analogy hold any water for you in terms of your work?

JT: Yes, I would say so. I’ve likened a body of work to chapters in a book also.

AM: What has been either the most satisfying or most exciting thing for you in your career to date?

JT: Most satisfying was quitting my design job 4 years ago. Actually, that was a bit scary, but being able to pull it off has been a satisfaction. 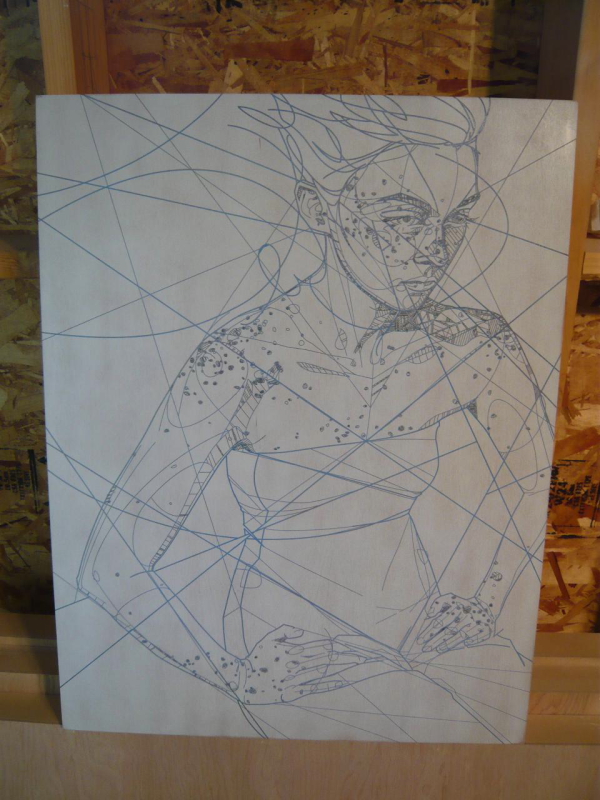 AM: How do you capture your ideas? Do you keep a sketchbook?

JT: I have a sketchbook, but I mostly use it to take notes about ideas and possible title names. When I do have time to sketch, I mostly draw people, buildings and some doodles.

AM: As a non-native Denver resident, how important to you is your location in terms of making work and the influence it holds on the pieces you create?

JT: When I was doing more urban landscapes, location was important. I’d probably do better in a larger city though. Now, other than preferring city life and Denver, I don’t think it makes much difference.

AM: We’ve seen a shift in your work towards the female form, with predominantly figurative works in your more recent oeuvre, where we think you have really found your voice. Some of your earlier work took on a more architectural theme. What was it that triggered this shift, and do you have plans to create any future landscape / built environment themed work?

JT: Well, I’ve always preferred figurative work. It was easier for me to paint buildings. Then I started going back to line drawing with urban landscapes. I guess I was excited about what I was producing. I mixed in figurative work pretty early on but it just wasn’t as successful in the beginning. I sort of kept at it until things began to click. I think “Eve” and “Ex Brownie” were the pieces that were the beginning of the transition. I may or may not revisit urban landscapes.

AM: Where does the inspiration for your subject matter come to you from? Are the females you portray based upon anyone in particular?

JT: Well, for me the inspiration is in the challenge of creating negative space. I find I’m more successful using models. For my new show, I worked with three models and also some found photos for reference. 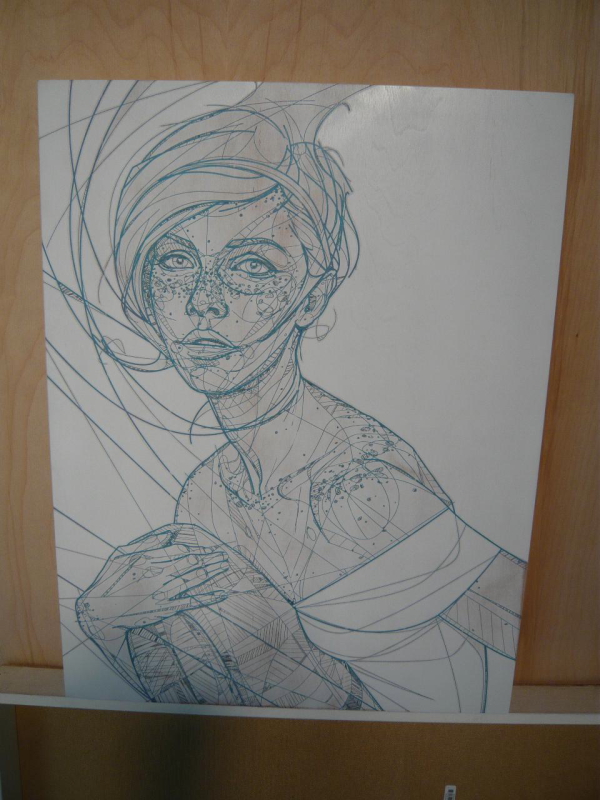 AM: Tell us your most secret desire, or career objective?

JT: I guess it won’t be a secret anymore but I’d like to live in Arapahoe Acres someday. Arapahoe Acres is a modest mid-century modern neighborhood just south of downtown Denver. We’ll see. As for a career objective – slow and steady – I guess I’m just concentrating on quality at this point and building a loyal collector base. I plan on doing this until I die so I figure there is plenty of time to get into museums and such down the road.

AM: Your upcoming show at David B Smith Gallery is entitled simply “New Works.” You’re not giving much away with the title! Is there a central theme to the work as there was for your last solo exhibition – “P.S. I Love You”? How long have you been creating the work for this show?

JT: I’ve been working on the show for about 6 months now. The show is all figurative and it’s all new. I’m thinking about behavioral juxtaposition within the individual. I’m analyzing the conflict between one’s ability to implement self-control and compulsion in order to manipulate and constantly self-gratify. I’m not sure how successful I am at communicating this, but it’s what I’m thinking about when creating the works. I guess the clues/expressions are subtle, kind of like the pallet. I’m working with white on white, black and white and black on black with mostly blue and black line. 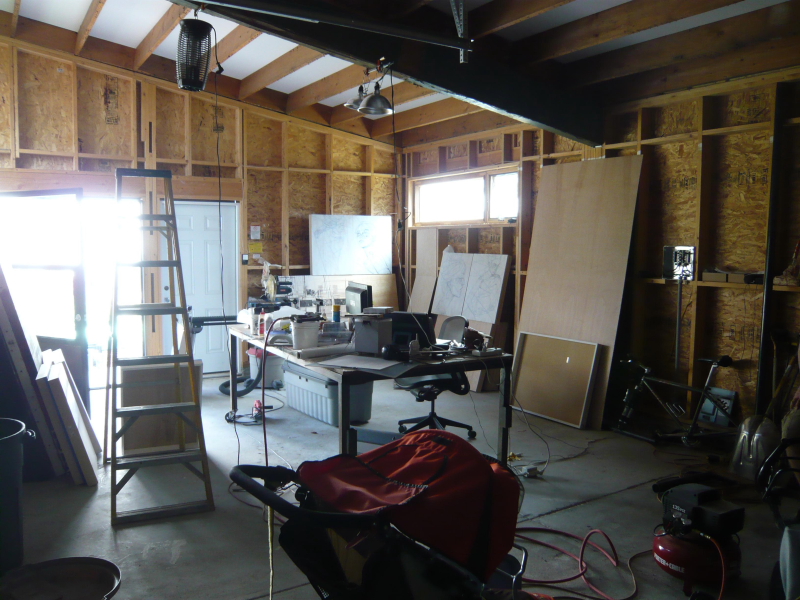 AM: You’ve been busy over recent times with solo shows in Denver plus group shows and art fairs across the US. Are there any plans in the pipeline for solo shows in New York, Los Angeles, London etc? In addition to “New Works,” what else should we be watching out for in the next 12 months or so?

JT: I have no plans for another solo show this year. I’ll be showing at Art Fairs throughout the year. Next up is Denver Modern in August with David B. Smith Gallery, of course.

AM: We wish you well for the solo show Jason. Thanks for taking the time to talk to us.

JT: Thank you Sven. I hope your readers enjoy!