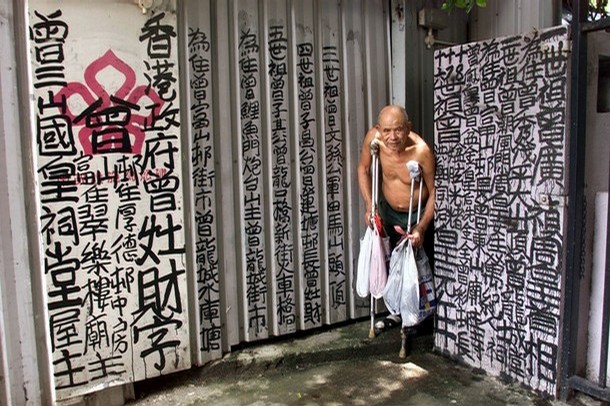 The late Tsang Tsou Choi, or the self-styled “King of Kowloon”, recently had one of his pieces sell for $65,000 at Sotheby’s (seven times the estimate). We remember learning about this prolific “street artist” during some childhood summers spent in Hong Kong before we even knew what art was, let alone “street art.” It definitely piqued our interest then and has continued to stay in our memories till this day.

Tsang died in 2007 but spent most of his life putting up his style of “calligraphy graffiti” marking the territory that he claimed belonged to his ancestors. At the height of his “career,” his obsessive dedication to his work made it an ever present part of the Hong Kong cityscape. The contents of works usually included “his name, his title (Emperor or King of Kowloon, Hong Kong, or China), his family tree â€“ a variable list of about 20 individuals, the names of illustrious emperors, and the exclamation, ‘Down with the Queen of England!'”Â  Although considered crazy by some people, his style has been influential to many artists, fashion designers, art directors, and interior decorators in the region.Â  Perhaps with this recent success at auction will spur more interest in the work of this true OG of street art and he will posthumously achieve a goal he had later in life – to have an exhibition of his work.