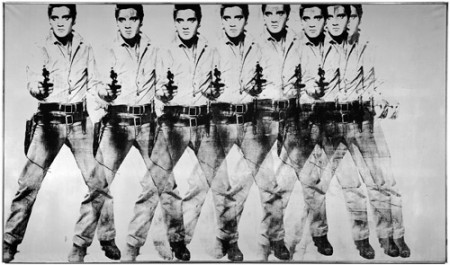 One month after Andy Warhol‘s 200 One Dollar Bills sells for $43.8 million at auction, The Economist has reported that his Eight Elvises painting sold privately for $100 million– a number that only Pablo Picasso, Jackson Pollock, Willem De Kooning and Gustav Klimt has achieved for a single sale.  It is a unique piece and measures 12 feet.

With one of the most vibrant markets of any artist, Warhol continues to be as relevant as he’s ever been.  This particular painting merges the most popular aspects of Andy Warhol and his fascinations.  It has fame – the subject is Elvis Presley, one of the most famous American icons.   It demonstrates the repetition of imagery.  The painting is done silver, his favorite color.  The threat of death is implied through the pointing of the gun at the viewer.  Finally, it is from 1963, a vintage Warhol year.

The previous owner, Annibale Berlingieri, a Roman collector, had the piece for 40 years.  The painting was sold in the autumn of 2008 in a deal brokered by Philippe Ségalot.  It is unknown who the new owner is, but it is safe to say that they are probably very rich and lucky.