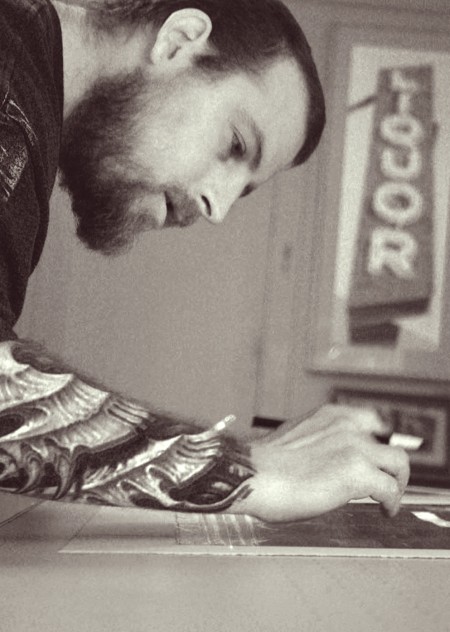 Known as one of the best graffiti writers of all-time, SABER can also be described as a pioneer, legend, hero, Guinness World Records holder, and activist. Most of all though, he is an artist. An artist in the true sense of the word. One with keen and insightful observations and expressions of the world he lives in, the beauty that surrounds him, and the injustices that affect him. He has dedicated his entire adult life to the work he believes in, often at great risk to himself and his body.

Underneath his prolific throw-ups, burners, and tags lies someone who is just as capable with the paint brush as he is the spray can. He has proven to be able to masterfully create on a wall, canvas, or with wood or metal. SABER has shown at renowned galleries and has traveled throughout the world, blessing walls from Los Angeles and San Francisco to New York to Korea. He is also extremely thoughtful and well-spoken and the following is an interview AM was lucky enough to conduct with the artist.

Read the entire interview after the jump…

SABER in front of his Los Angeles mural -"Pepper's World"

AM: For the benefit of our readers not yet familiar with you, can you please tell us a little about yourself and your work?

SABER: Well…the moniker I go by is Saber. I am a graffiti artist that is inspired to use my earned talents from painting outdoors to refine my fine art abilities.

I grew up outside of Los Angeles. I am fortunate enough to come from a long line of artists. My family always encouraged me to be an artist. Drawing was one of the things that felt right and kept me calm. My grandfather was an illustrator back in the ’40s and ’50s based in New York, where he gain recognition for his provocative pin up girls for men’s magazines like Esquire and American Weekly. He has painted people such as Grace Kelly, Norma Jean, and my uncle swears he gave young Andy Warhol one of his first jobs. His name is Euclid Shook and was later based out of Connecticut. 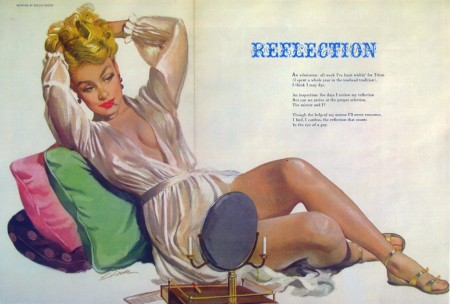 My middle name is Weston – named after the small town.  Anyways, I have never really talked about my family lineage. One reason, I guess, is that I was raised in CA and the east coast seemed so far away. My parents were real hustlers. My mom was the first female president of alumni of Art Center and my pops graduated from Chinaurd. Basically, they hustled all sorts of creative endeavors to make ends meet.  My parents work studio was at home so I basically grew up around the hustle and bustle of each project. My Mom even worked at a special effects company called Don Post Studios where they did work for such films as Aliens and King Kong. She had one of the original Alien Face Huggers chilling in her office. I loved him.

I was a wild emotional kid and drawing was the one thing that I cherished most. In 1984, I discovered skateboarding and the rest is history. 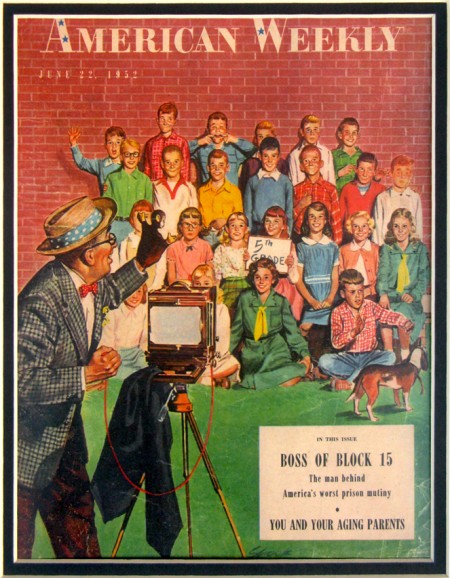 AM: You are one of the best graffiti writers and artists today and have earned that reputation throughout the years from your work on the streets. You’ve endured countless physical injuries in getting your work up, have had trouble with the law, and even seen others die. Some artists working in the “street art” genre today have never paid dues, yet claim affiliation and piggyback off the hard work that others, such as yourself, have created in building it up. How do you feel about them and how it affects the fundamental integrity of street art and graffiti?

SABER: First of all, if any artist says that they have and or earned “street cred” to define their place in an art movement then they are very confused on the definition. Here is a small list that defines the term “street cred”:

Basically, what I am trying to say is the credibility factor has to be judged on an individual basis. If you have been putting in work for over ten years and are humble and respectful to the history before you, then it seems the universe sorts it self out.

Most “street artists” at this point really have no home roots within the neighborhoods or really can fathom the struggle and innovation that is covered in 1,800 layers of “Palomino Beige”. I am not talking about going on the internet and dropping current names but actually recognize the chain of style influence. But, I am not completely hopeless. The fundamental integrity of these movements lies within one’s own effort to produce great high-risk work. Graffiti evolves within its environment. By the way, letters will always hold precedence……. 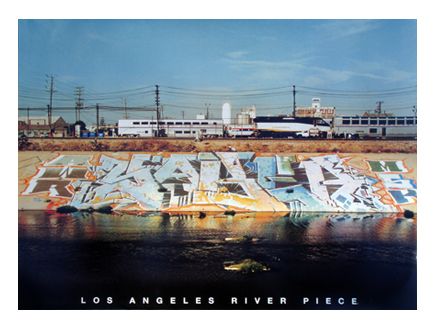 AM: It has been almost 8 months since your historic L.A. River piece was buffed. It was one of the greatest pieces of graffiti ever created. How are you feeling about it today, after the initial shock?

SABER: I was honored that the United States Army Corp of engineers used federal stimulus money to buff my piece. What a way to go out. The Army uses millions of federal funds to help fuel the LA war on graffiti, painting out layers of raw history in the armpit of the city while schools have no books and hospitals are closing.

If I knew they were going use stimulus money to buff my piece, I would have painted out my own piece on principle. The new city attorney and the sheriff’s department used this as a media stunt to kick off their new war on graffiti. The city attorney actually calls it “the end of days scenario”. This is a massive campaign and my piece was the first to go.

When I heard they where buffing it, I raced down there to capture the moment and even offered to take over for the fat ass on his cell phone. They called the police on me instead. It seems to have affected others more than myself. I have had some pretty emotional emails from far away places. One kid told me he was going to kill himself over this. I told him that everything will be O.K.

This piece lasted 12 long years and as far as I am concerned, if you paint it outdoors, it will be gone. 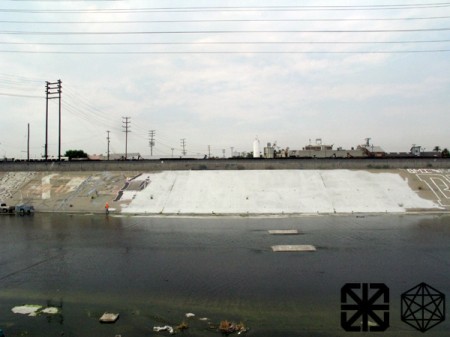 AM: In the “credits” section of Dash Snow’s “God Spoiled a Perfect Asshole When He Put Teeth in Yer Mouth” book, you and Revok receive special thanks by Snow. How were you involved with that exhibition and what interesting Dash Snow stories do you have to tell?

SABER: Dash Snow was charismatic, elusive, omnipresent, a true vandal, a friend to many, a dirty rotten scoundrel, a prince, a generous thief, had a genuine heart, great smile, wicked laugh, sharp eyes – a blue-ribbon-bossman……..

Many will miss him. 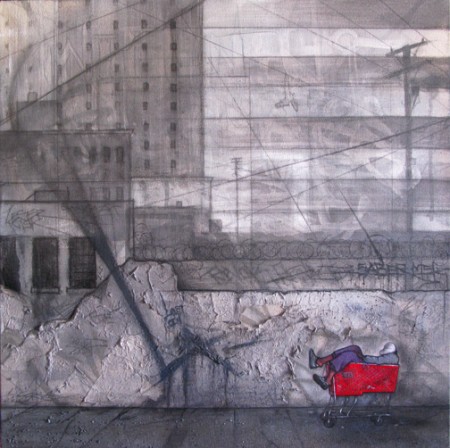 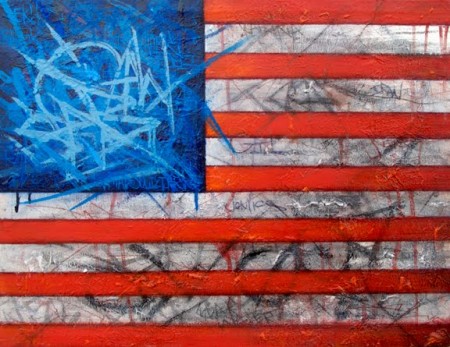 The American flag, as interpreted by SABER

AM: Prior to unveiling your Flag piece to the public, did you have any concerns over how they would reconcile the representation of the American flag, a symbol that’s been ingrained to be honored and pledged to by Americans since preschool, being painted with and over using the medium of spray paint, which is usually associated with vandalism and graffiti? Did you hope controversy would arise as part of the dialogue it would ultimately create?

SABER: I had been playing with some abstract paintings using the flag so this project felt natural. I definitely did not expect the magnitude of the reaction. I had a feeling that some red neck somewhere might loose their senses.

My flag video ended up on the front page of many right wing websites, it’s alarming to see the demographic of the republican conservative party as you travel down the rabbit hole, you funnel to Nazi white power sites. When I googled, I got sites that ran from Politico.com, to where it starts to get weird with URLs like angrywhiteguy.com. From there, you hit the violent racist white power and guns obsessed sites like glocktalk.com, ar15.com, etc. They all had my flag on the front page and the comments were basically to find me and cut me to pieces.

It’s interesting to get to see this vision of the evangelical extremists in the Republican Party. They’re angry, dangerous, racist, self-entitled old white guys. I have had several death threats, but it’s funny because I am already jaded on the wrath of the 1990s. These assholes don’t visit L.A. anyway. I don’t want to come across as some hard ass, but I really have no problem defending myself with a smile.

Really, I was inspired by my wife to participate in the video contest and my intentions were honest. I have epilepsy and it is out of my reach to deal with this condition without any health care. I am thousands in debt on medical bills and they will not get a dime from me on principal.

Fuck medical insurance companies. There is no room for empathy when there is a motive for profit. 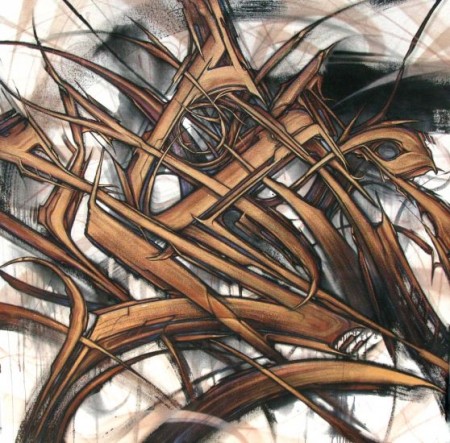 AM: Will you be exploring more political issues in your art or do you consider your Flag piece more of a personal issue?

SABER: These flag pieces feel natural for me to paint and give me new channels to explore  I have many more to paint, but I don’t want to be solely known as the flag guy as well as the LA river guy. I definitely have found a new sense of purpose though. I didn’t know how passionate I really was about certain political issues until recently. Obviously I have a stake in the Health care issue. I believe if I make art with honesty then it translates with integrity.

In the next couple of months, I have a project planned based on the bank crises and moveyourmoney.org. I can say I feel passionate about how these banks have treated me, let alone the rest of us.

AM: As street art continues it movement from outside (the streets, etc.) to the inside (galleries and other institutions), how do you feel about its progression and prospects for the future?

SABER: The prospects of the future are for those who write it. Thank God for Crayola crayons…

AM: With your deserved new-found national mainstream popularity due to the Flag piece, what is up next for you and what are your goals for the next couple of years?

SABER: Stay busy, stay focused, and one day I will be on an island painting sunsets in my boxers.

UPDATE: SABER sent us the following after the interview was concluded:

SABER: In a couple of days I have a little short movie about my homeless street artist buddy Pepper.  We put a small teaser on Saberone. Check it and a short story about Pepper out.

I guess the reason why I am sharing this with you is that I just realized that my recent project, Peppers World is an answer to the question of a street artist’s validity. How can a gallery of higher establishment verify the artist’s validity on the street? Instead of seeking my own personal validity by seeking the top I decided to crawl down to gutters of the street.  Pepper is the true validity because he is the street. 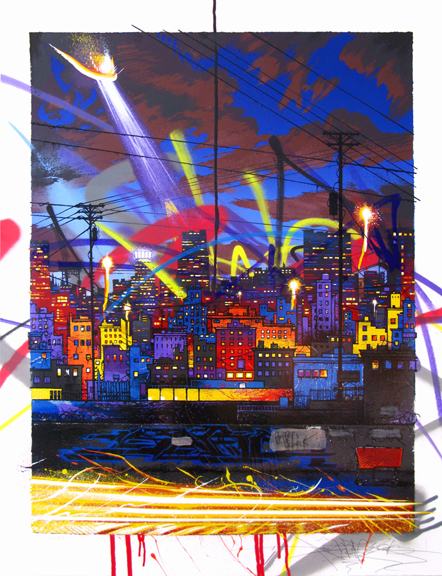