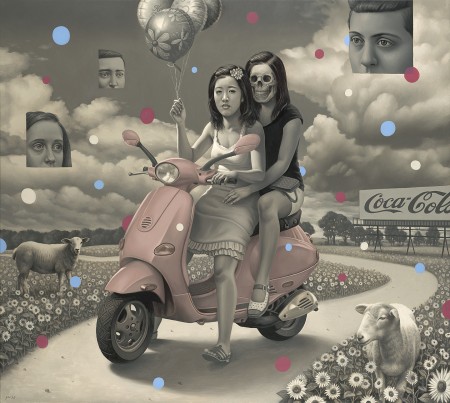 Opening this Saturday night at Jonathan LeVine will be a new exhibition from Alex Gross, one of the more fascinating and complex painters we follow here at AM. The Los Angeles based artist will be making his return to the New York gallery after almost two years, bringing a fresh collection of works entitled “Discrepancies”, also the name of his newest monograph to be released the same night.

We were delighted to be able to talk to Alex recently about his new body of work, influences, creative process and much more. Take a look at more preview pics and all the questions & answers after the jump… 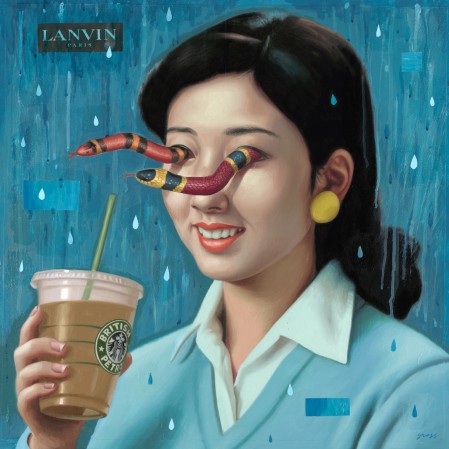 Arrested Motion (AM): Can you tell us a little about this new body of work? How did you choose the title “Discrepancies” for your show?

Alex Gross (AG): This body of work has been my focus for about the last two years. I feel like each time I have a new show, it’s a continuation, or development of themes that went before. “Discrepancies” came to me awhile ago as a perfect name for both this show and my new book. When something has a discrepancy, it usually implies that there is some part of the whole that does not fit, or connect with the rest. My work is mostly based in realism, since I use a great deal of photo reference for my people and locations. But obviously my images usually involve a series of elements that don’t normally occur together in the real world. Comparing my work to reality, one would find great discrepancies. So, it felt like the right name. I like the implication that something is a little bit “off,” yet not entirely. 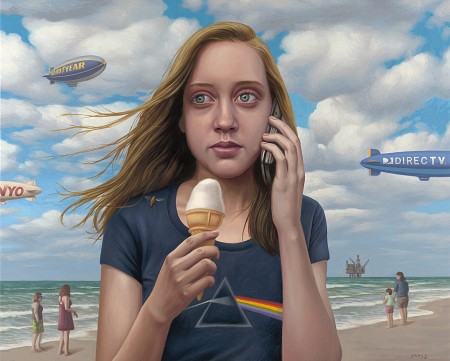 AM: Your last show – “Mysteries and Manners” at Jonathan LeVine was over two years ago. How do you feel your art has progress or changed since that time?

AG: “Mysteries and Manners” was a very exciting show for me and I was happy with it’s success. But immediately afterwards, I felt that there were so many things that I had only touched upon, and that I wanted to push much further. I had alot more time to work on this show and I really tried to push the themes that I normally work with and broaden them. I’ve always been fascinated with older imagery, whether it’s Victorian photographs, or Gothic painting from the 1400’s. But, I’m equally interested in contemporary images and themes, and I wanted to bring more of a mix into my work. I wanted to talk about the world right now as well as referencing the past.

One of the things that interests me about the world right now is that despite the massive amount of technology at our disposal, we actually communicate with one another less, in a much more impersonal way than ever before. Computer and cell phone technology is a big part of this. We all love our cell phones, but how many times do we see people out somewhere together, each talking to someone else on the phone or busy texting? There’s this giant disconnect now, and I wanted to paint about that. So, around half of the images in this show are addressing that in one way or another. Visually, I also wanted to loosen the reins of the “real” world, and incorporate more graphic imagery that isn’t always realistic. 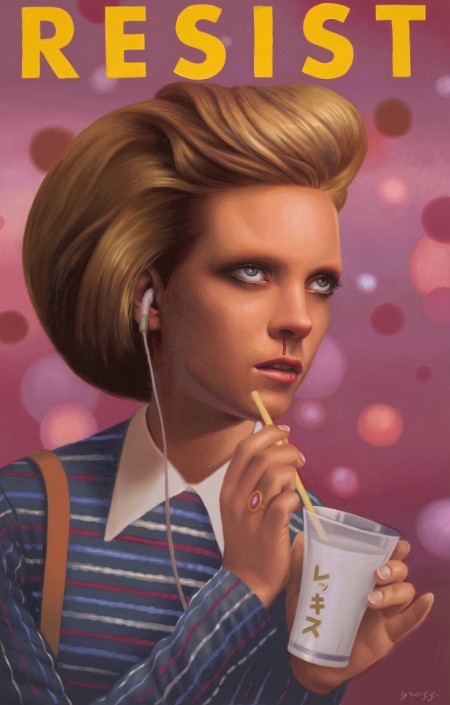 AM: Your work often is a collection of opposites, a hybrid between the ancient world and modern times, between nostalgic Asian imagery and Victorian constructs, and even interspecies amalgamations. What are your thoughts and reasons behind the interplay and relationships that form from this approach?

AG: I think I talked about this a bit in the previous questions. I’m really just combining references to subjects and images that interest me. Many of my paintings have been based on Victorian wedding photos. Redemption, Last Judgement, Hierophant are just a few of the older pieces that started that way. So, the formality of 1800s wedding imagery clearly attracts me. At the same time, I don’t want all my images to look like I’m talking about something from 150 years ago. There are contemporary themes that I want the work to discuss, and so I want to bring modern and contemporary elements into the pictures to make it clear that this is not simply a “vintage” picture. I like how dreams have meaningful themes but freely combine imagery that does not belong together, and I try to bring that same approach to my painting. 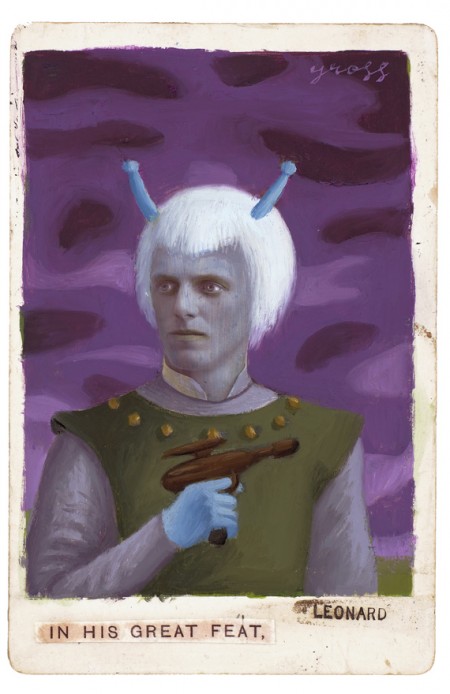 AM: You previously taught at your alma mater, the Art Center College of Design in Pasadena, for a period of time. What did you learn during your time there as a faculty and did it affect your artwork? Are you still involved in teaching in some capacity?

AG: I really enjoyed teaching and I did learn a lot. Most of all, I realized that being around young artists pushes teachers to keep approaching their own work in a fresh way too. The things I would tell students became the same things I told myself. And sharing my work with students, I didn’t want to feel that I was some dinosaur whose work they could not appreciate. So, ultimately it was a great thing and I got as much out of it as I gave. I’m not currently teaching, which has been a nice break, but I’d like to do it again before too long. 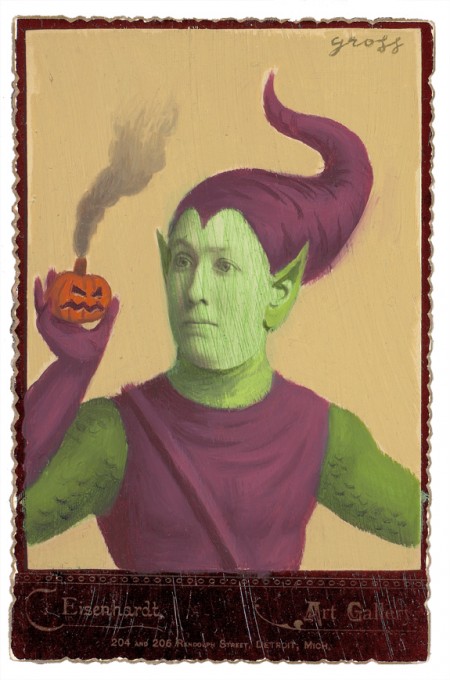 AM: Can you tell us a little about your creative process? Do you take a different approach when comparing your oil paintings to your mixed media pieces?

AG: Most of my creative process takes place on the computer. I do elaborate comps in photoshop which combine drawings, photos and other elements. I generally spend quite awhile in this stage when I am developing a large and involved piece. Maybe I spend one to two weeks on the comp. Sometimes, I plan to leave a few decisions for painting, to keep it fresh.

Lately, I have several versions of what’s called “mixed media,” so there is no one answer to your question. My smallest mixed media pieces are done directly on antique photos, and those are generally unique. Sometimes, I will do a medium scale mixed media piece on panel, where I will incorporate some collage along with paint. Those pieces vary more in the process. Some are less planned than others. I like mixing it up, sometime doing a very planned out piece, and other times doing something much more random. 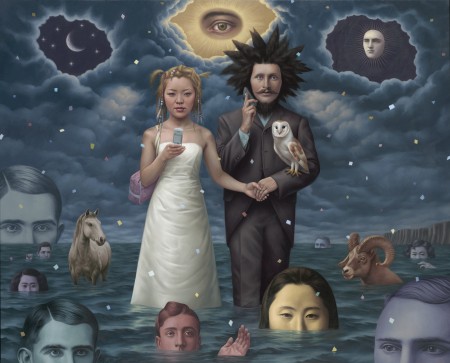 AM: Much has been written about Artist Fellowship from the Japan Foundation in 2000 and the pivotal effect it had on your art. Have you been back to Japan recently? Do you continue to draw new inspiration from those experiences or is your art starting to evolve in a new direction?

AG: I still do go to Japan fairly often, every year or two, but it no longer has the effect on my work that it once had. In the beginning, I was obviously very influenced by the imagery and the culture there. Nowadays, my influences are much more diverse. I still consider Japan an important part of my visual vocabulary, but only one part. Flickr is probably more influential on me than anything else the last few years.

AM: Are there any future shows or projects you can share with us after this exhibition at Jonathan LeVine.

AG: Well, I will have my next show in Los Angeles, in 2012. I’d rather not start talking about other galleries than Levine since this is the focus now, but I’m very excited to be able to show in my own town again after so long. It will have been six years since I last showed here. I’ve got a new book that will be coming out for this show at Jonathan Levine, and I’m very excited about that. I might try to do a smaller book in a year or two that only has small mixed media pieces, but I’ll have to see how that goes. Maybe it will be prints instead of a book, who knows. Other than that, just more painting, unless a major movie studio wants to let me direct a movie. Probably not, though…