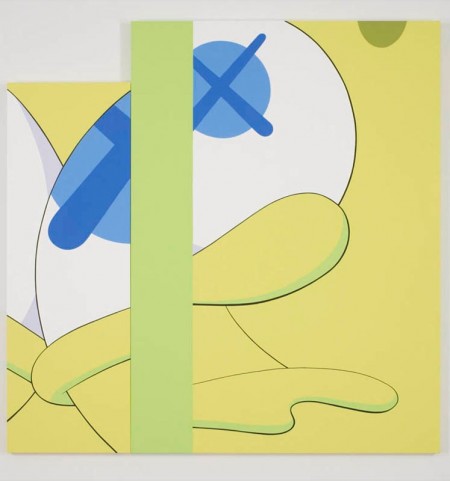 After “Passing Through” Hong Kong in a giant way (covered), KAWS will be bringing his unique brand of pop art to Galerie Emmanuel Perrotin on November 6th. It was at Perrotin’s Miami location in 2008 where KAWS made some of his first major waves in the fine art world with the Pharrell “curated” exhibit, Saturated, showing the public for the first time some of his impressively rendered, large scale Smurfs and Spongebob themed works. Although he has shown work in a previous group exhibit at the Parisian gallery, and had a solo in neighboring Spain earlier this year (covered), this will be the first solo for the artist in the City of Lights. And with his first museum show under his belt this past summer (covered), the artist that seemingly never sleeps will fittingly conclude his historic year in the shadows of the Eiffel Tower.