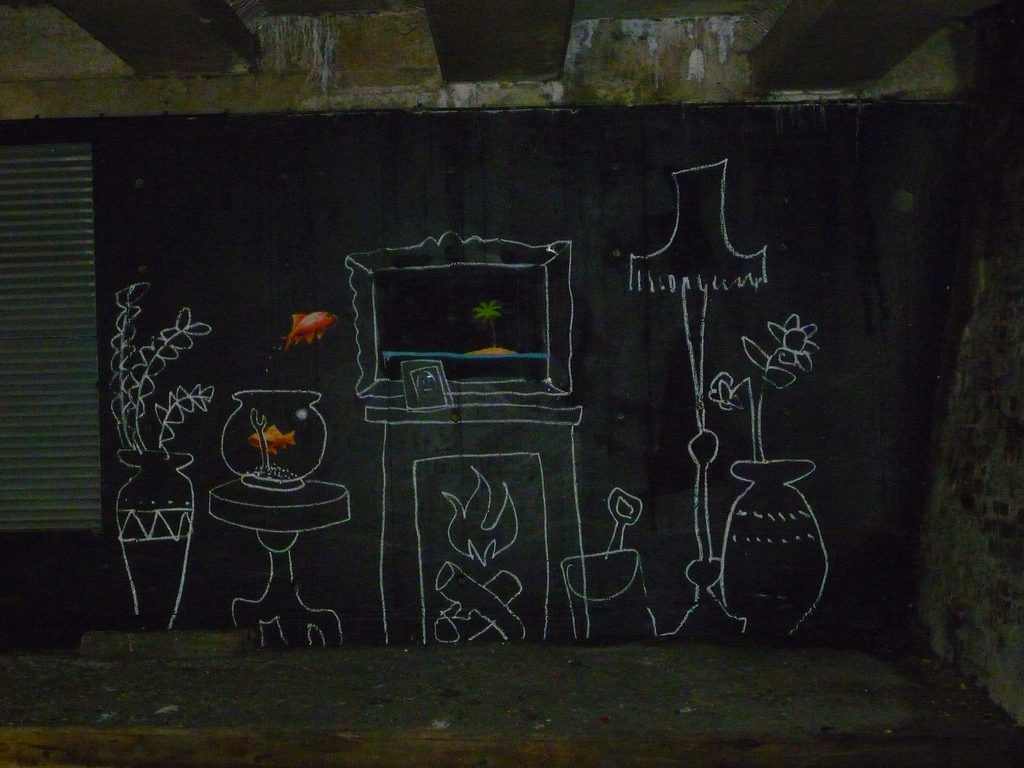 In near perfect synchronicity with the “Sperm” piece Banksy officially claimed as his own through his website last week, another work popped up in the London Borough of Camden which bears striking resemblances to that of the illustrious street artist. The “Living Room” themed chalk piece, with stencil detail accents reminiscent of murals thrown up in Boston and Detroit last year, is located at the same canal wall where the infamous Banksy vs. Robbo battle began, only for it to keep going and going at various other locations in London. And so it seems it continues on, if in a more subtle form from the Banksy front. Ironically, this new canal piece was timed perfectly as a rebuttal, whether intentional or not, to Robbo’s rambling first person account of his “graffitti war” with Banksy issued over the weekend.

Could the Sperm piece be a symbolic allusion to there being a Baby Banksy on the way? The Living Room setting perhaps alluding to a more home-like dynamic on the horizon for the famed street artists, suggestive of a man ready to settle down? Pure speculation, of course. Who knows?! Either way, new work from Banksy is always a welcome sight, especially when they’re this mysterious in meaning.

Congrats as well to Banksy for earlier this morning being nominated by BAFTA for Outstanding Debut by British Writer, Director, or Producer for Exit Through the Gift Shop. With the game-changing pseudo street documentary turned comedic biopic of some french guy also being nominated earlier this year by the BFCA for a Critics Choice Award and Film Independent for a Spirit Award in the Best Documentary categories, perhaps The Academy will give Banksy the deserved nod, despite being snubbed by the HFPA for a Golden Globe nomination presumably due in part to his public anonymity.

Check out the Sperm piece after the jump, along with detail shots of both.