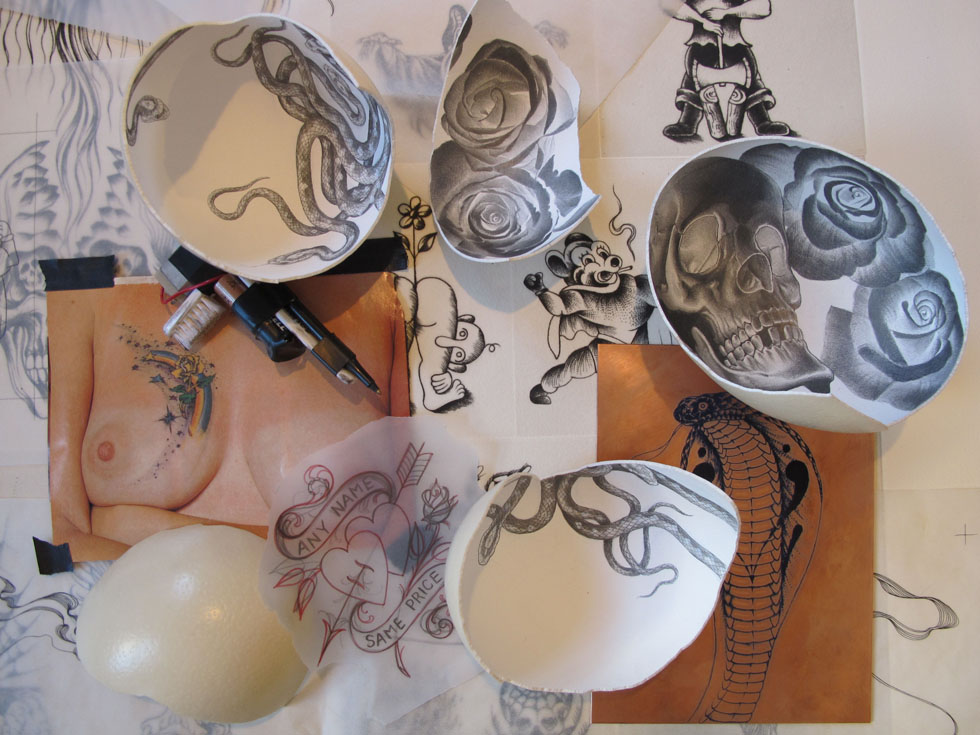 In his first ever exhibition on the West Coast, as well as first true solo since taking NYC by storm last summer with If You Don’t Belong, Don’t Be Long (covered) and burning an entire body of work in Mexico last fall, Scott Campbell will have the distinct honor of being the first artist to have his way with the virgin white walls of OHWOW’s brand new permanent Los Angeles space, as the Miami institution stakes claim to and makes their presence be known in Southern California. Opening Saturday, March 19th, Noblesse Oblige will allow the New York-based tattoo icon to continue his innovative mixed-media assault on the fine art world, if with a little less lighter fluid and pyrotechnics this time. Utilizing copper, currency, graphite, ink, neon and ostrich egg shells, Campbell has the uncanny ability to reinvent timeless tattoo imagery and repurpose everyday media into cleverly composed and visually striking works of art, accentuating the intrinsic value of both the tattoo subculture aesthetic as well as the common objects upon which they’re manipulated.

Perhaps best known for his provocative cut currency sculptural “stacks”, the exhibition will see Campbell push the limitations of this trademarked laser cut relief application to the max, where a single work will use $5,000 worth of currency sheets (costing $11k total from the US Mint) to form a giant iteration of the Skull Cube, arguably his most iconic creation to date. A series of ink drawings on the interior of ostrich egg shells, a set of etched copper plates engraved with tattoo gun, as well as a slew of additional surprises – including a couple large scale typographic neon-based works – will make this an absolute must-see, and will set the stage in a big way for what OHWOW has to offer the LA art scene.