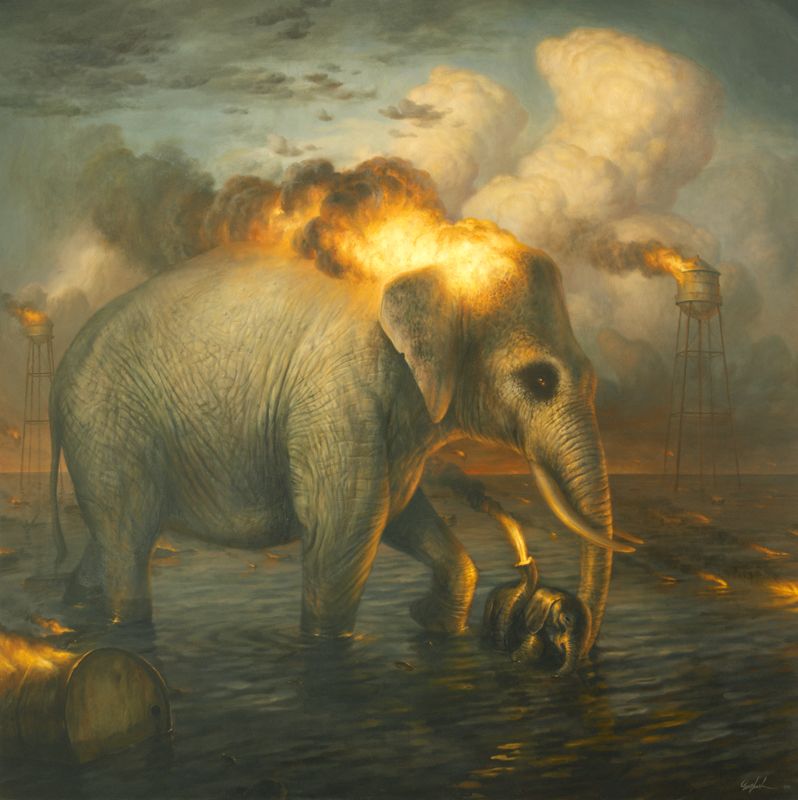 As we perused the preview images for Martin Wittfooth’s upcoming solo in New York at the Lyons Wier Gallery, we couldn’t help but think that he had elevated his painting to the next level with this new body of work. After seeing one powerful image after another, we sat down to put some questions to the Brooklyn-based artist about The Passions scheduled to open on October 13th.

We talked about the symbolism in his work, which is evident as you encounter unforgettable images like a monkey feeding bits of burning books to the birds, an ox riddled with burning arrows tied to a tree, or a hummingbird attacking a dove in midair. In the interview after the jump, Martin reveals some details that shed light this new series of work, talks about some future projects, and much more… 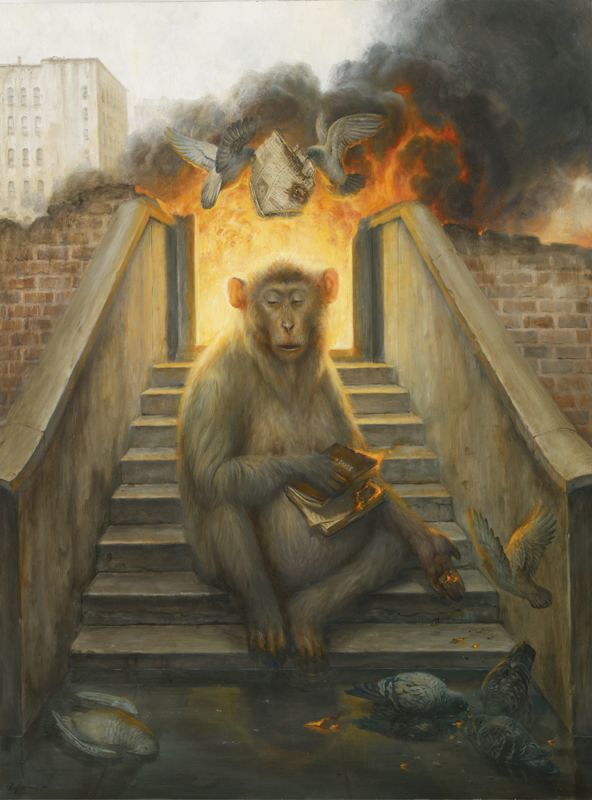 Arrested Motion (AM): Tell us a little about this new show The Passions at Lyons Wier. Is there a collective theme behind this new body of work?

Martin Wittfooth (MW): The theme behind The Passions is a bit more specific than my previous series have attempted to tackle. This time around I wanted to start exploring something I’ve spent a fair amount of my time musing over and having ongoing dialogues with people about: the destructive nature of blind faith. Specifically in this series, I’m interested in exploring the idolization of violence, self-sacrifice, and suffering that are central to the faith-based notions of martyrdom and sainthood. Saints and martyrs appear in blood-soaked abundance in the histories and holy texts of the dominant religions of the world, and however civilized and enlightened we may think of ourselves in the 21st Century, we don’t need to strain ourselves all that much to witness and admit that these ideologies are still held sacred by an alarming percentage of the population.

There is a double-meaning to the title of the show. In Western philosophy, “the passions” refer to biological instincts or strong emotions that seduce one away from reason, whereas the Latin origin of the word is “passio”, which means, simply: suffering. The idea of the abandonment of reason tied together with the act of suffering is, at the heart of it, what this new work is really about. This term is of course consequently connected to the most famous of all acts of martyrdom: the crucifixion of Christ. On that point, I find it morbidly interesting that Christians hold the symbol of his method of execution to be a sacred icon. One can’t help but wonder: if this act was to have happened in modern times, would we perhaps see mini electric chairs dangling on silver chains? But I digress.

I was really interested in soaking up the imagery and symbolism of classical art that dealt with this subject (examples of which there are, of course, thousands), so a lot of my new pieces are making references to these old works. This was in an effort to bridge the gap between the archaic and the contemporary, on both the level of the imagery itself and the ideological connotations underneath. Fire makes an appearance in one form or another in each of these new pieces, and often as a stand-in for a halo. Traditionally, of course, the halo denotes a state of holiness, yet portrayed in the form of fire I’m alluding to the destructive underpinnings of blind piety. 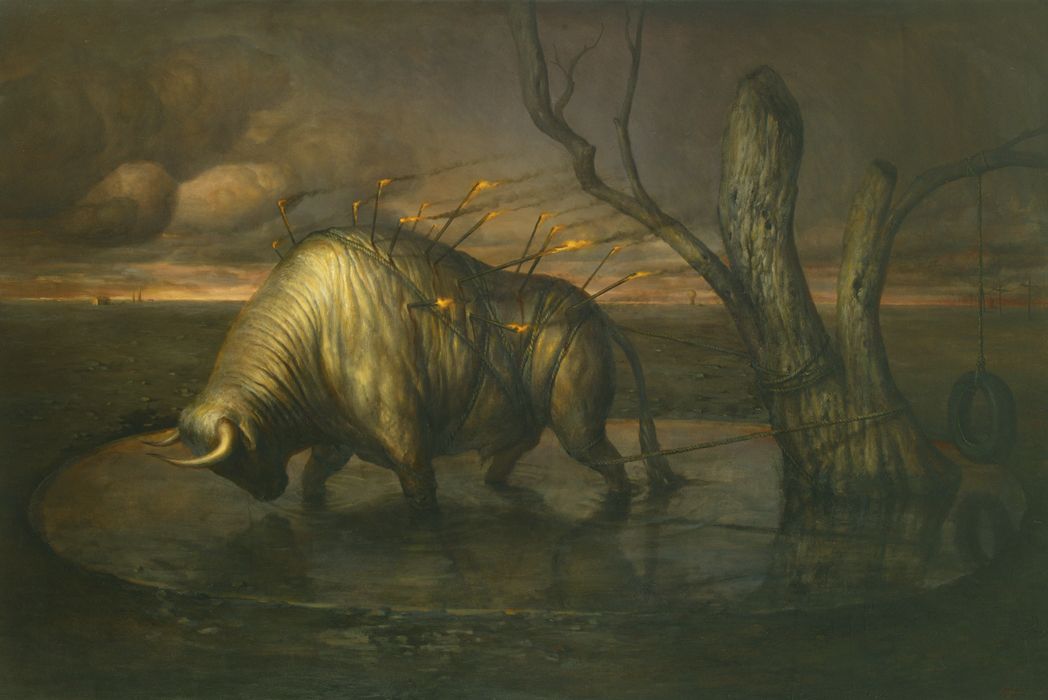 AM: Wear and tear, rust, and abandoned human constructs seem to line your landscapes. What is it about these objects that you love to paint so much? Do you use photo-references?

MW: The abandoned and decayed remnants of mankind make such a common appearance in my work for a couple of reasons. The first is conceptual, and aims to point at the idea that we, the collective viewer, are still somehow present in these works, yet the rust and decrepitude of these relics suggests their uselessness, and our own abandonment of – and thus helplessness to affect – the scenes that unfold in the paintings. The second reason for conjuring up this imagery on such a regular basis is that I find these textures compelling to paint, and this makes my job less boring. There is a third reason, too, I guess: I live and work in somewhat of an industrial wasteland in Brooklyn, so I never have to venture out very far to find reference. Which brings me to the second part of your question: I do use photo references, but I try and either shoot most of it myself, or to gather up a broad library of images to work from, so that I can really understand the subject I’m trying to capture. 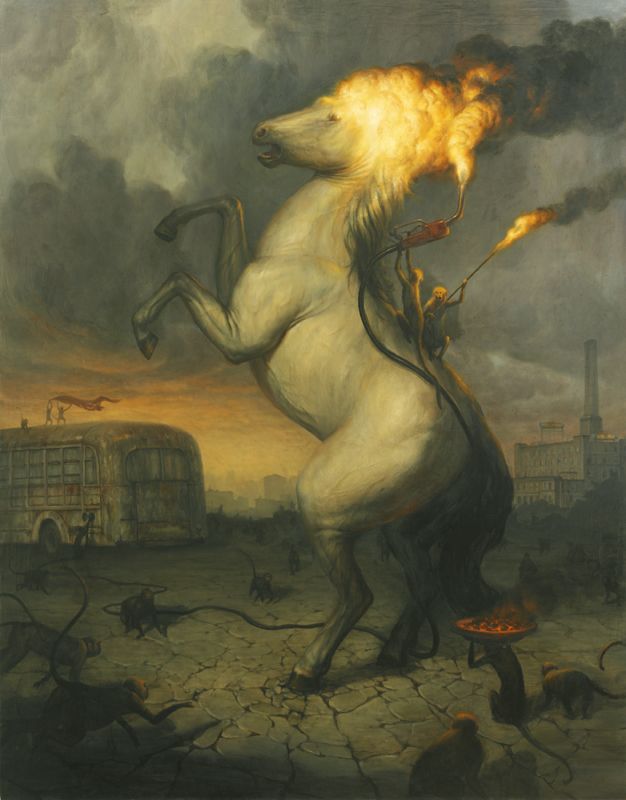 AM: I feel that in your work, the animals living in the world abandoned by humans are not completely liberated and free from suffering. In fact, they still seem to be dealing with the problems we have left behind. Interestingly enough, in your new piece Sacrifice, a non-human species seem to be playing a cruel trick on the other, something I haven’t seen before in your work. How would you explain this painting?

MW: I aspire to portray my animals occasionally as mirrors of ourselves, as allegories for our own follies and burdens. Sometimes I place us at a vantage point where we have to contend with the notion that we’re standing amidst the participants of what’s happening in these scenes. In The Sacrifice, we’re witnessing an act of martyrdom: the monkeys are, with the help of hot coals and gasoline, making a halo for their victim. Yet, before we’re allowed to project all responsibility onto this homicidal pack, we should observe the fact that it is the viewer – and not his assailants – that has caught the horse’s attention. 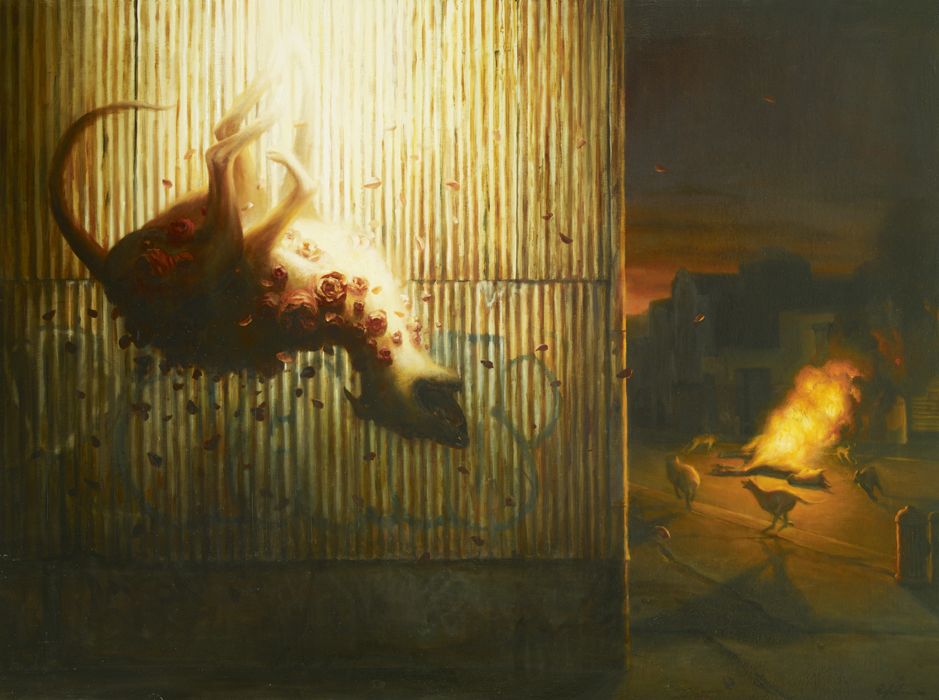 AM: Some of your paintings deal with ideas of rebirth, reclamation, and regeneration with flowers and other plants growing out of dead animals and deserted objects. Can you expand on what this reoccurring theme means to you and your work?

MW: I’ve kept revisiting this ambiguous theme many times with this same instinct as I hope to achieve in all my work: tension, or a pull effect in more than one, clear direction. On one hand, this recurring idea plays on the idea of the increasingly uneasy and imbalanced relationship of the man-made world and the natural one: the perversion of the natural order. On another, it’s also a hint at hope, that new ideas, beauty, the sublime can arise out of the ashes. 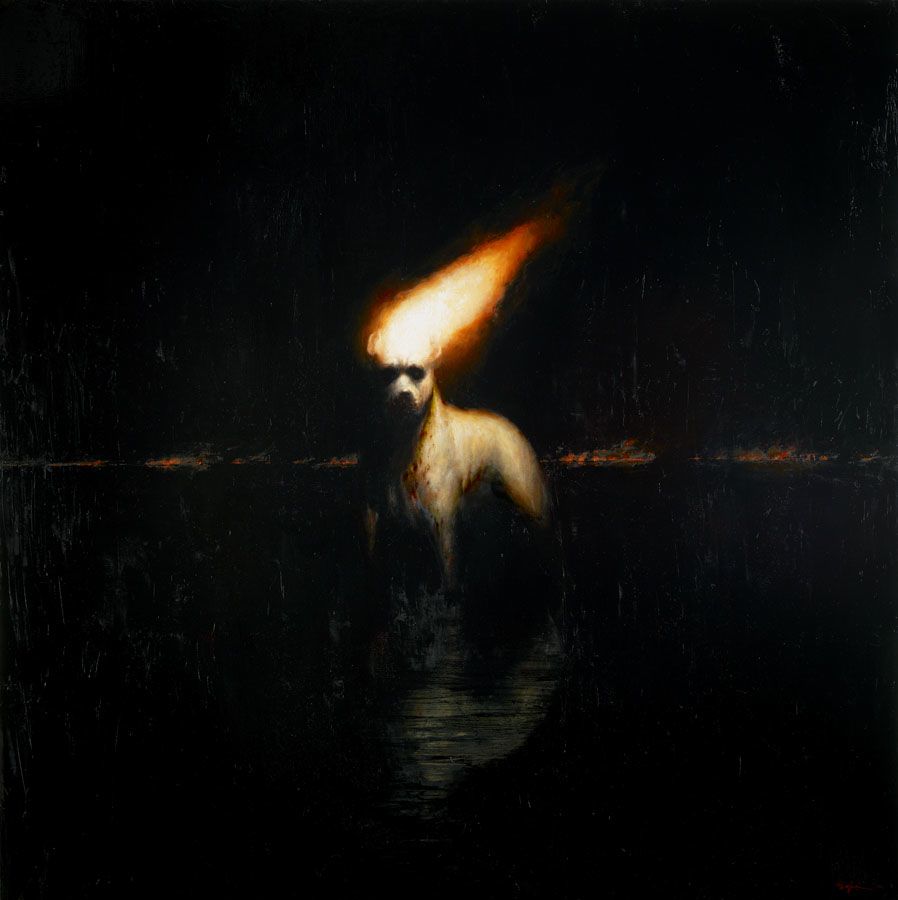 AM: You are curating a show Dark Waters coming up in November at Copro Gallery. Can you tell us a little more about that project and the challenges that come along with it?

MW: I am incredibly honored to be working with this absolutely stellar group of artists who are taking part in Dark Water. There are 29 of us in this show, and the focus is on representational painters, many of whom have been critical in my own development as an artist, and who have also been immeasurably influential to countless other artists. Included in the show are artists whose work is in the collections of the MET, the Brooklyn Museum, London’s National Portrait Gallery, and so on, so it’s a pretty heavy-hitting collective. I gave everyone a very broad theme – in fact, the title itself is the theme – and I’m really excited about what everyone is coming up with, and to see the rest as it comes in. I picked my invite-list with great care, and am simply overwhelmed with gratitude for the fact that virtually everyone I approached came on board.

The only challenge I’ve faced so far has been the task of juggling both my upcoming solo show with the Dark Water one. Both have been vacuuming up all of my time lately, and I hope they both go off without a major hitch. 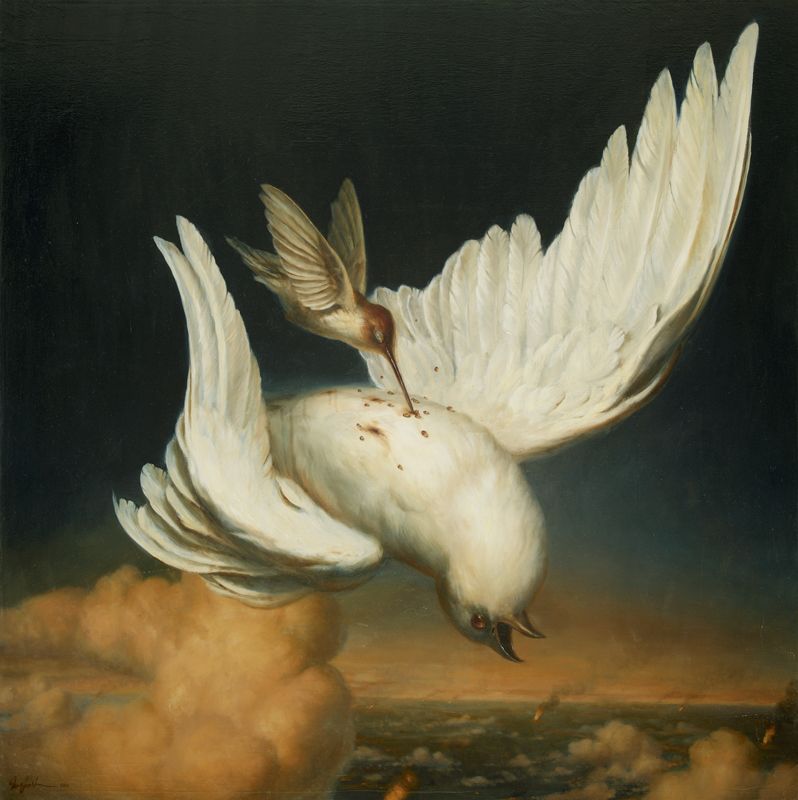 AM: Any other upcoming shows and projects you can share with our readers?

MW: I’m working on getting a video project off the ground related to Dark Water, have another solo show lined up in LA in the Fall of next year at Corey Helford Gallery, and a two-man project in the works with my good friend Jean (Turf One) Labourdette set aside for the Spring of 2013. New things are consistently showing up on the horizon… I’ve had to start getting really selective with what I can and can’t take on. The one and only thing I don’t currently have enough of in my life is, simply, time.