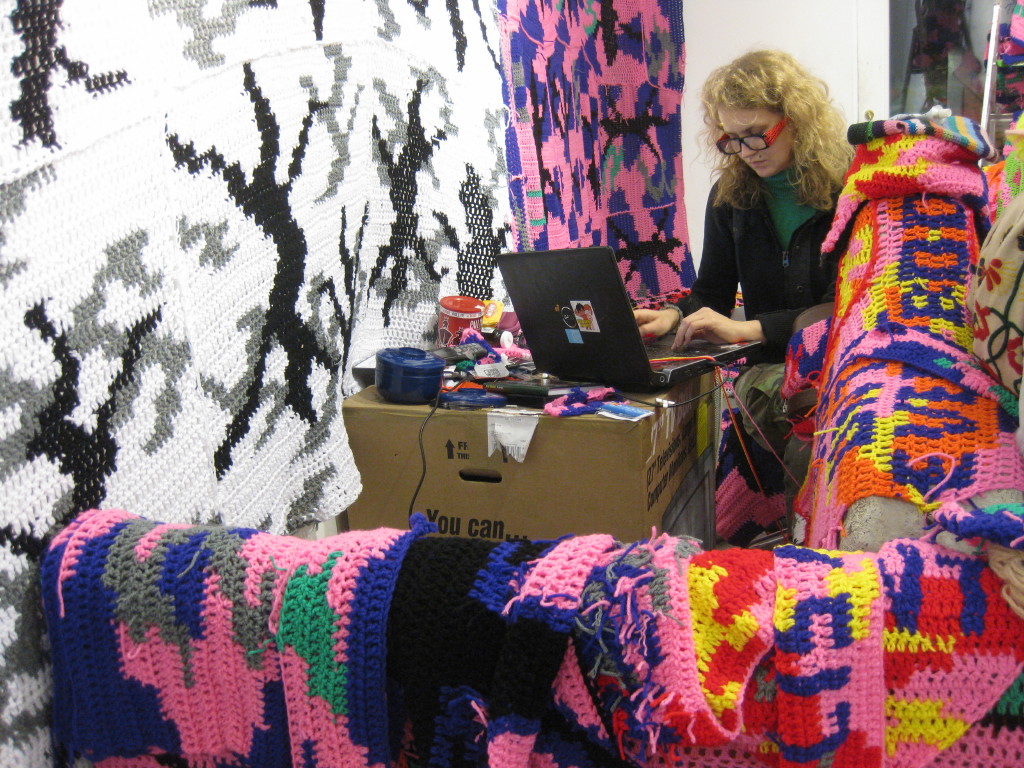 Olek is launching her first UK solo show this evening at Tony’s Gallery in East London. The wall-to-floor installation recreates living quarters, complete with bed, tables, picture frames and other domestic objects — all covered in brightly-coloured crochet. AM has been keeping track of progress over the last few weeks and we’re looking forward to seeing the finished result. The show’s title, “I do not expect to be a mother but I do expect to die alone”, quotes from an appliquéd blanket produced by Tracey Emin in 2002 and last exhibited at her 2011 Hayward Gallery retrospective.

We are rather fond of Olek. Whilst it may just be our outdated romantic notions coming to the fore, we’re drawn to passionate individuals who refuse to be slowed down by trifling matters like sleep deprivation and physical discomfort. Crocheting non-stop for hours on end, week after week, regrettably goes hand-in-hand with repetitive strain injury. Nevertheless, we do get inspired by the determination needed to push through such pain barriers to pursue a creative vision. Artists, keep suffering.

We’ll cover tonight’s opening in a subsequent post. In the meantime, see additional setup and teaser photos, more rambling, and the details of Olek’s giveaway after the jump. 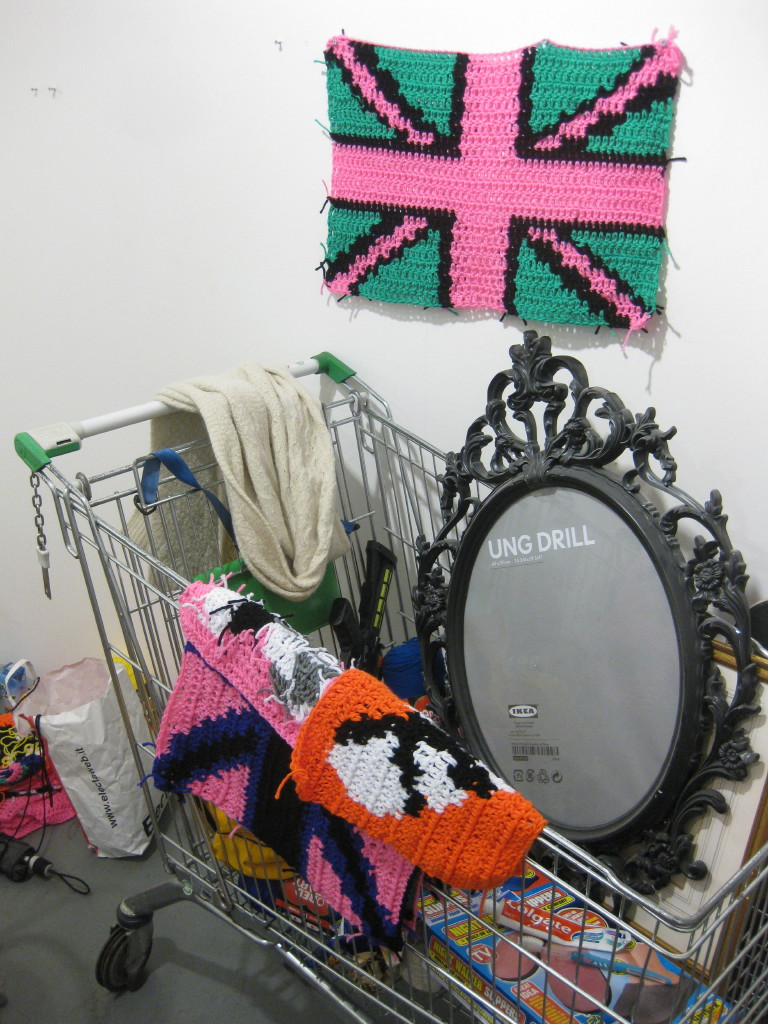 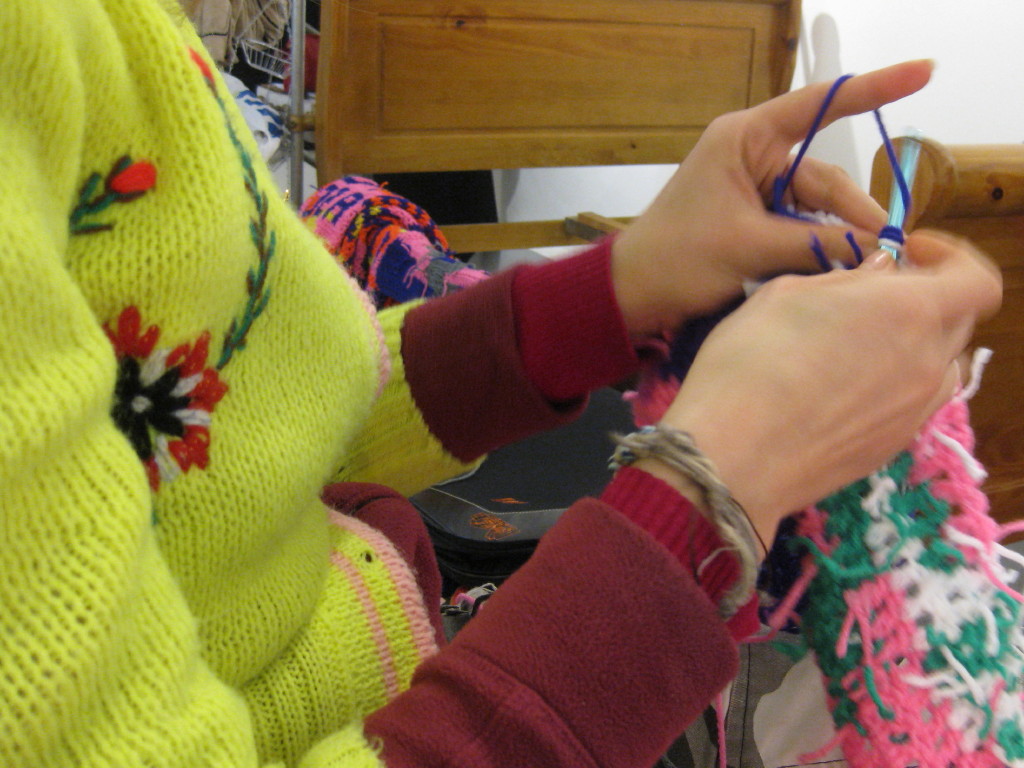 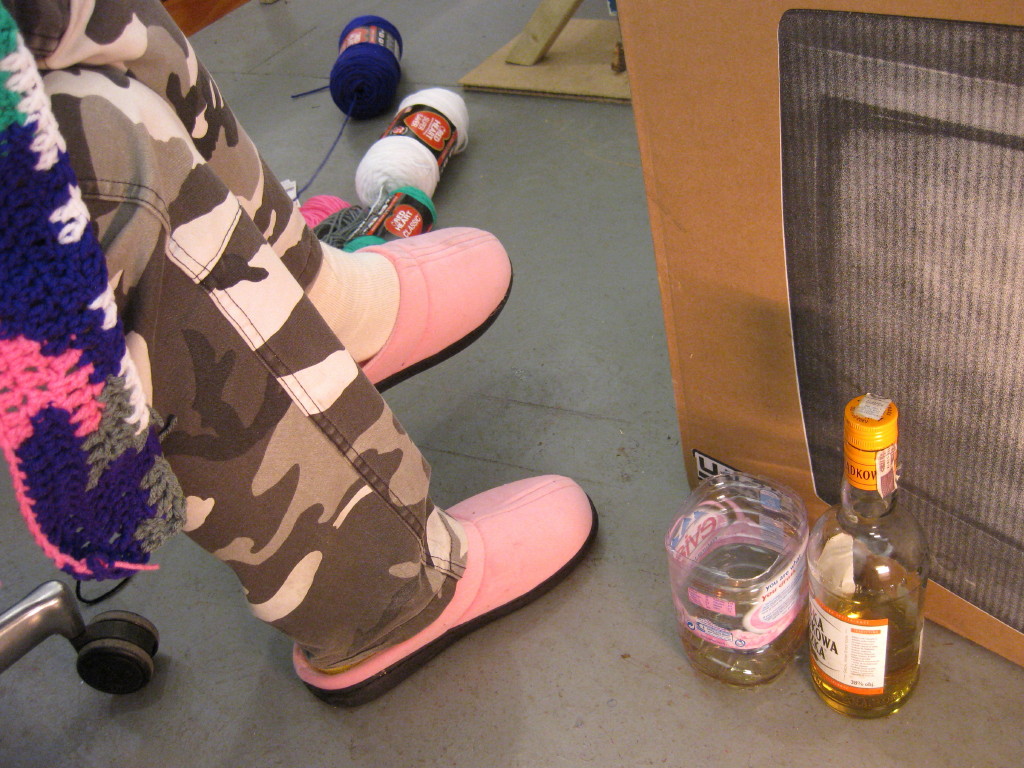 Every so often, AM will have far too much time on its hands and will picture itself in a mass brawl or riot scenario. We’ll then speculate about which of our allies could truly be counted on to battle alongside us, and which ones would run off like scared rabbits. It’s during these moments that friends — unbeknownst to them and through no action of their own — occasionally get relegated in our minds to the status of acquaintances. We know it’s unjust, but cowardice and betrayal are difficult to forgive, even when they’re imaginary.

In a fight situation, we’re pretty confident that Olek would be a good person to have on-side. She’d stand her ground, which makes us like her even more. 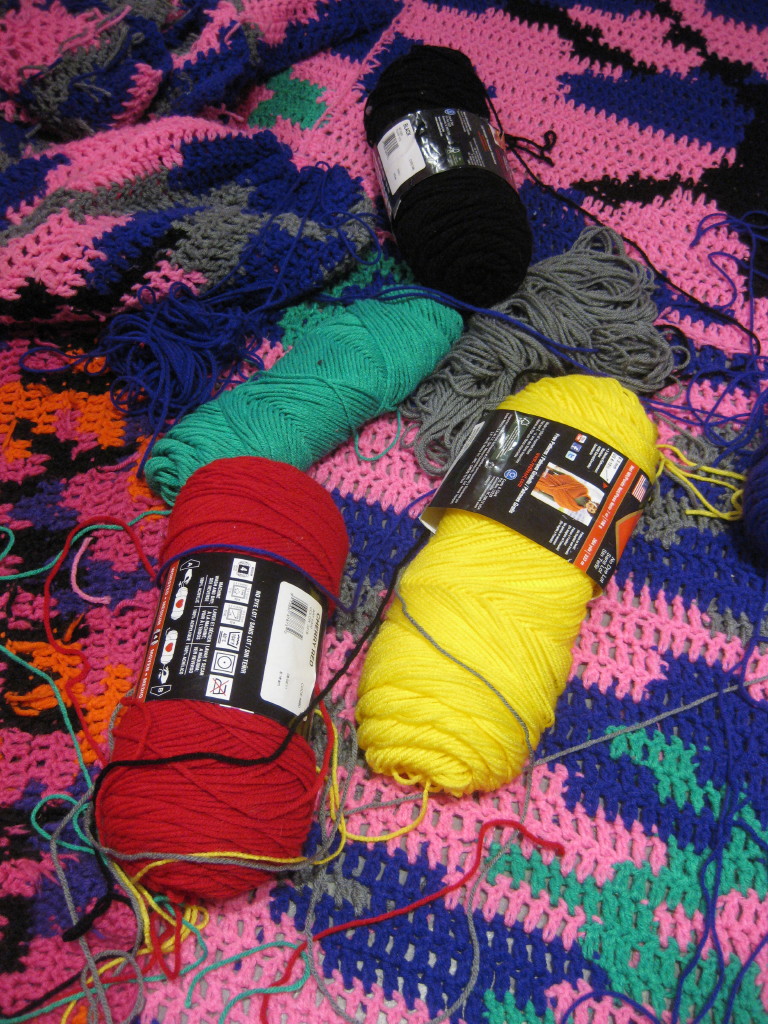 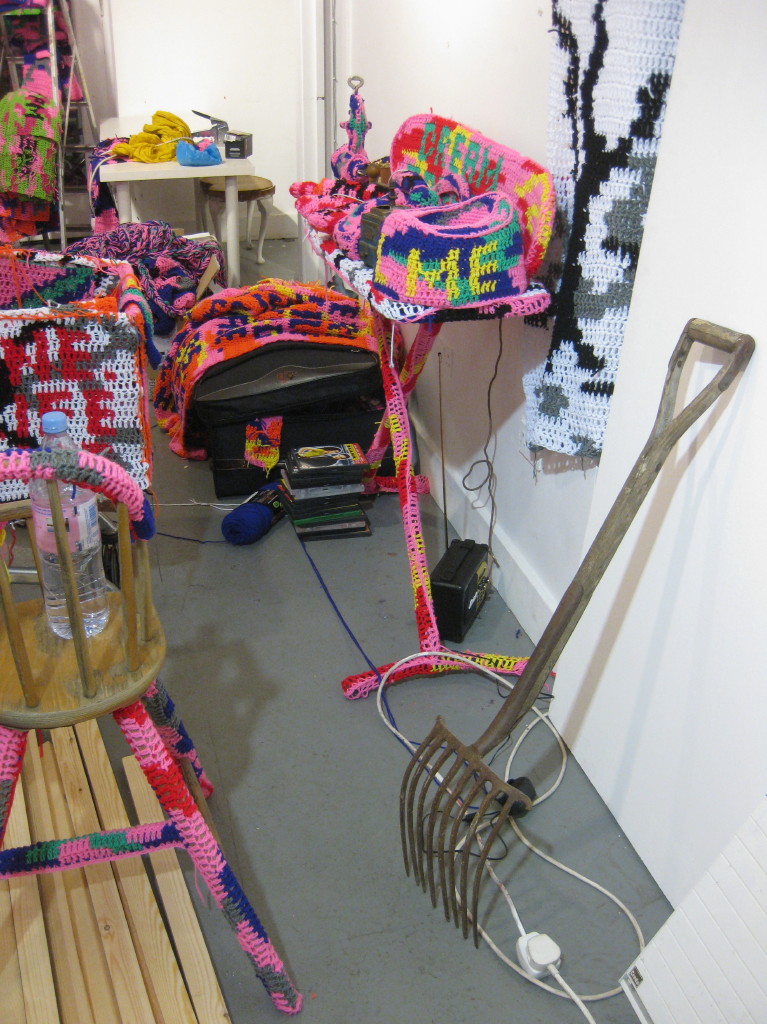 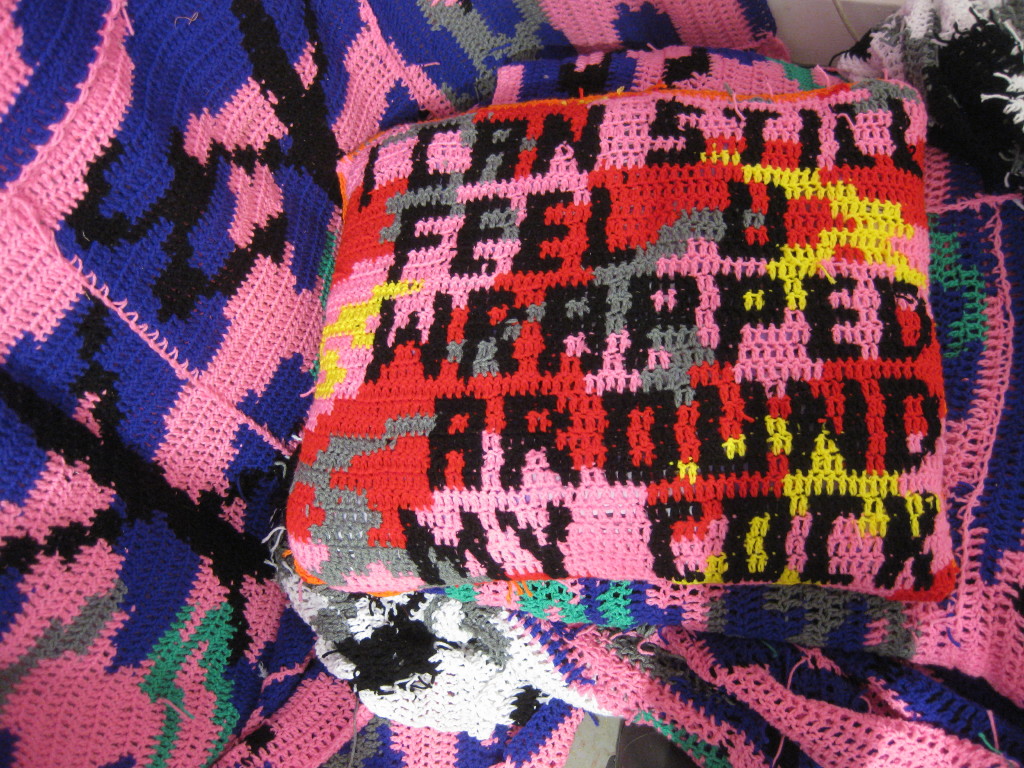 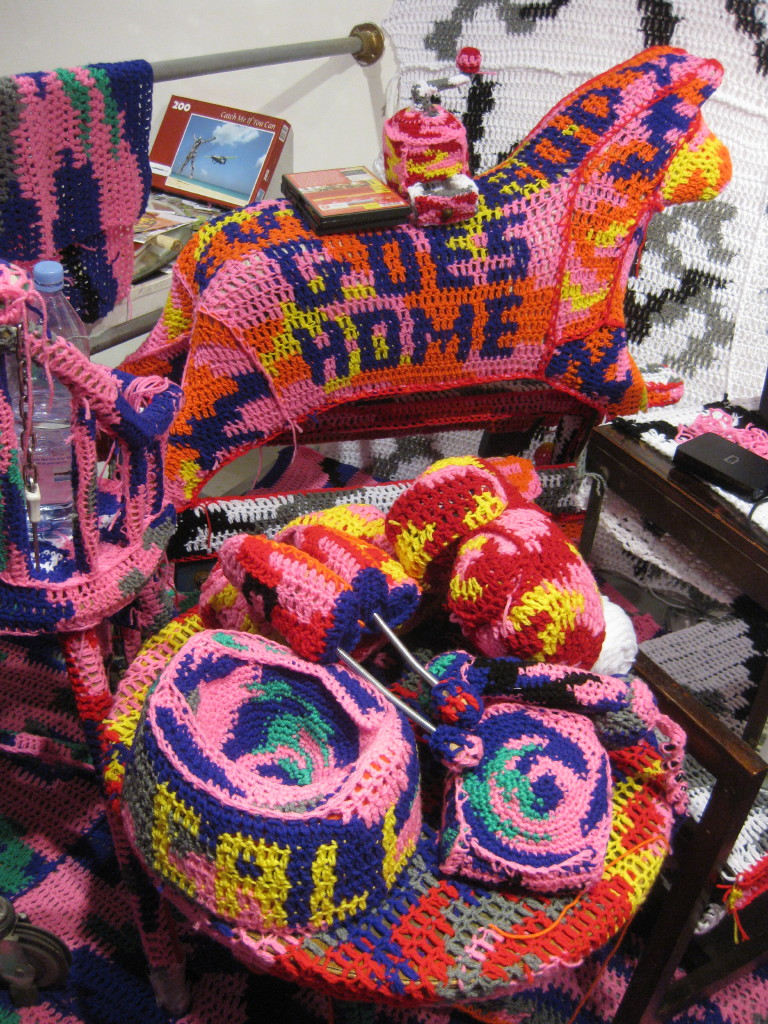 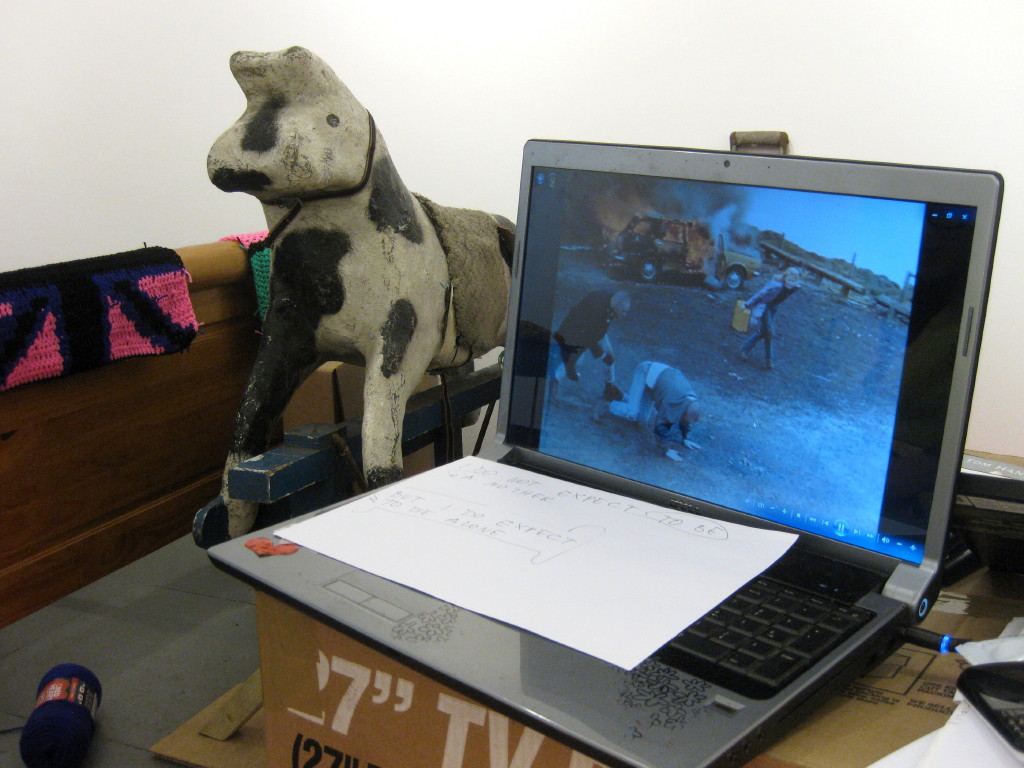 Can you name this movie?

Olek has kindly offered us a crocheted Union Jack, measuring approximately 39 cm x 55 cm, to give away to a lucky reader. In bright pink, green and black, the work is certain to fit in with the colour scheme of any sophisticated home. As the artist is an avid film-watcher and always open to recommendations, just leave a comment at the bottom of this post or on AM’s Facebook page with a must-see movie suggestion for her. A winner will be chosen at random on Wednesday 1 February at 8 p.m. London time and contacted for their mailing address. One entry per household, please. Good luck to all.

Separately, if you can identify the movie being watched on Olek’s laptop above, make sure to also mention its title in your comment. The first person to correctly do so will get their name thrown into the hat twice. Not a guaranteed win, but it doubles your chances of scooping up the prize.

Update on 2 February 2012: The contest is now closed. One entry per household was permitted and each unique entry recommending a film was allocated a number. The random number generator on Random.org selected the one given to Noel Drumbor from New Jersey. Congratulations to Noel, and thank you to all who took part.

Our prize winner walks away with a Union Jack crocheted by Olek. However, no reader managed to secure glory by naming the film on Olek’s laptop. What’s going on? Doesn’t anyone here like skinhead movies? The correct answer: Romper Stomper, written and directed by Geoffrey Wright, and starring Russell Crowe. 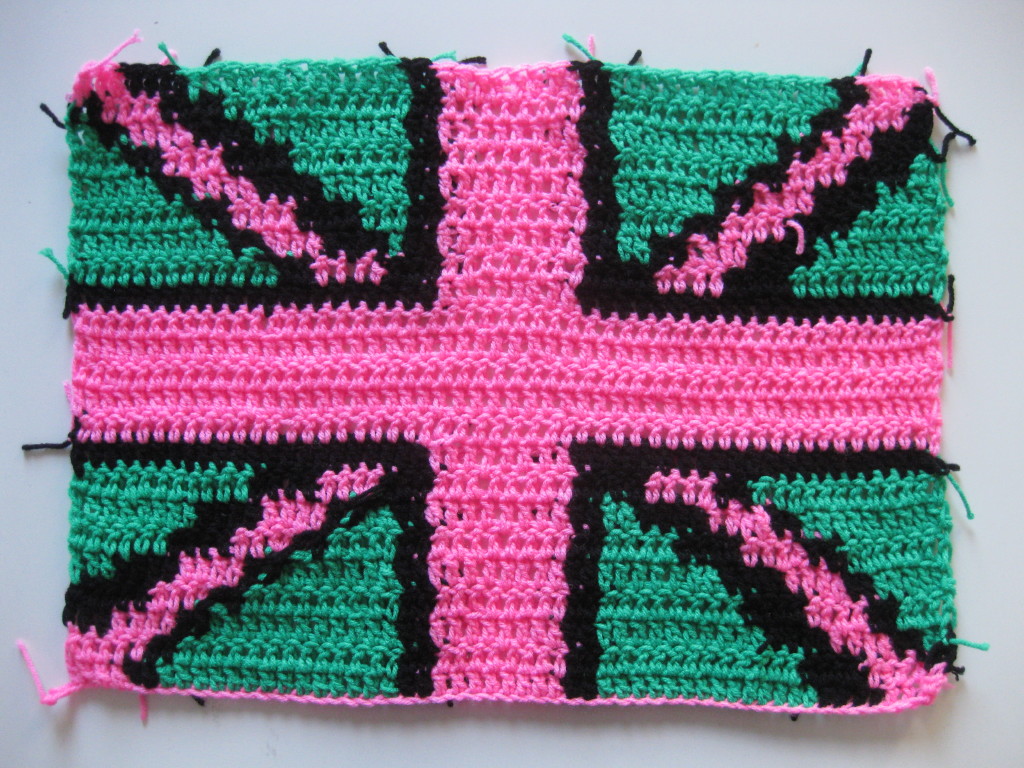