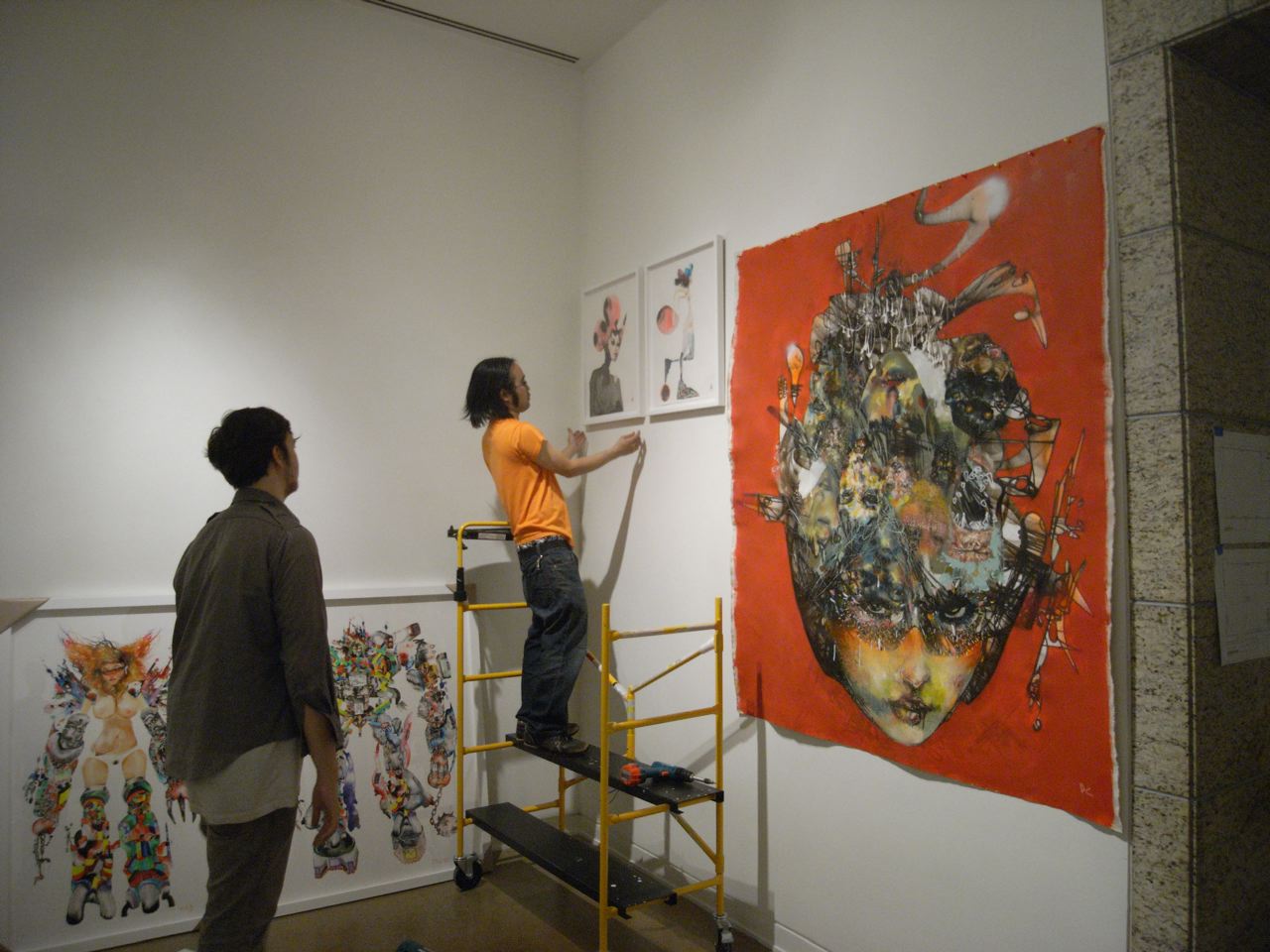 The “Giant Robot Biennale – 15 Years” exhibition is set to open tomorrow at the Japanese American National Museum (JANM) in the heart of Little Tokyo in Los Angeles. We are looking forward to seeing what looks to be a fantastic show with artists such as David Choe, Jeff Soto (interviewed), James Jean (interviewed), Souther Salazar, kozyndan, Rob Sato, Jack Long and many more.

Also, we had the opportunity to talk with the man behind it all – Eric Nakamura, one of the founders of Giant Robot. Questions and answers after the jump… 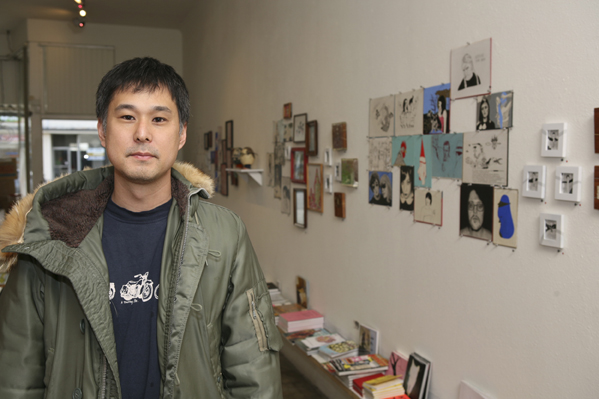 Arrested Motion (AM): Tell us a little about this show and how it came about. Will it be a “Biennale” in the true sense of the word and happen every other year?

Eric Nakamura (EN): The Giant Robot Biennale show came about in 2007. Clement Hanami from JANM contacted me about doing a show. It was only 3 months away. I think it was meant to be an experiment, but it proved to be the most well attended opening with 2700 people, and many more were turned away. They had 20,000 visitors in the next three months. I scurried and contacted artists who I knew had work ready to show or were not super busy at the time.

It’s a Biennale, and this is our second one two years later at the same location – JANM. Will there be a third? I supposed that depends on how they like this one, but judging by their excitement – I hope so. 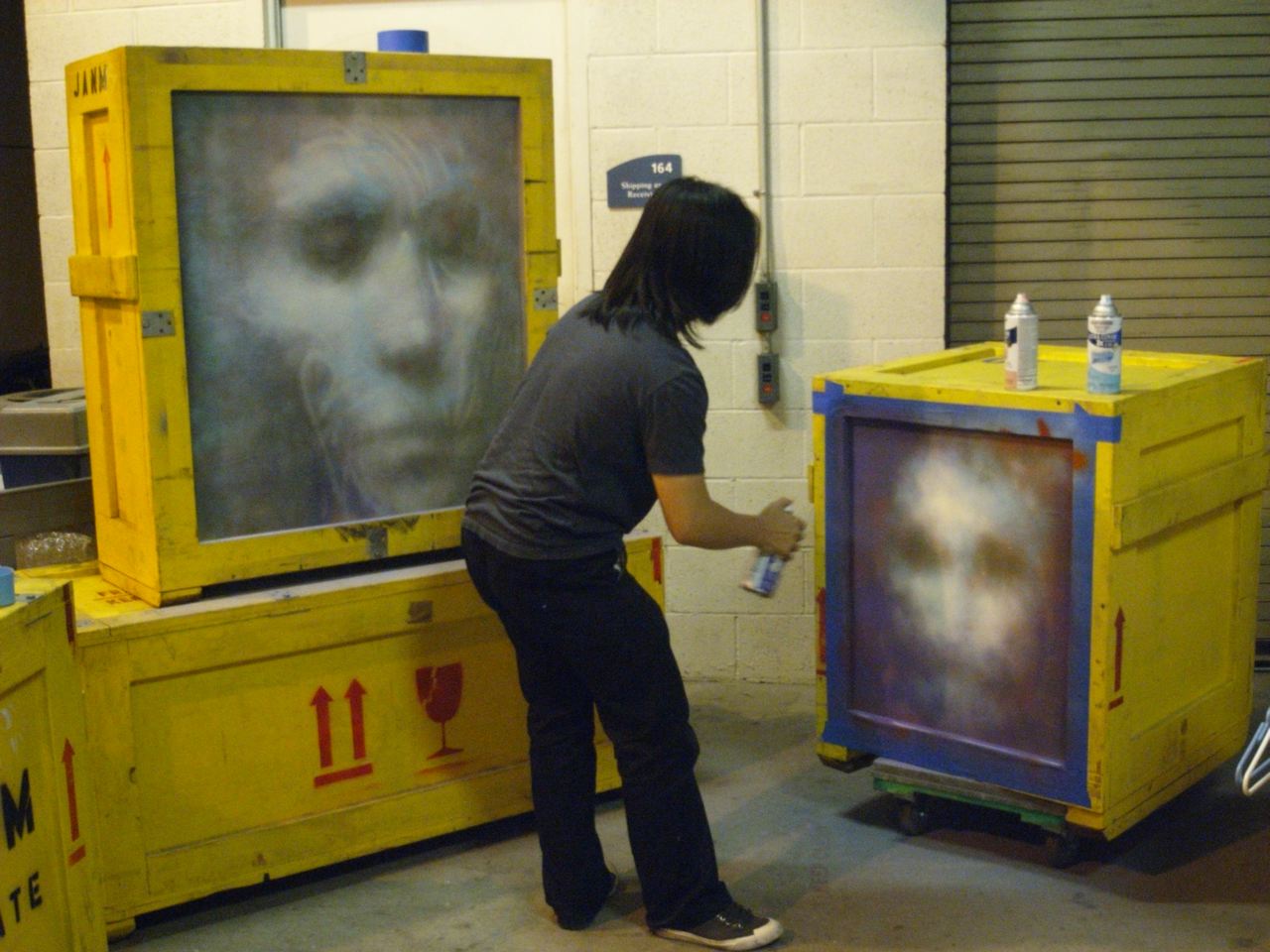 AM: How did Giant Robot become involved with the Japanese American National Museum? Are there any other projects (past or future) that you are or have worked on with them?

EN: I suppose I’m an outspoken Japanese American. There’s not a lot and not enough. I like art. I own Giant Robot. So there’s a definite synergy. We did our first event with them in 1997 and have done many smaller projects since. I hope one day to play a larger role at their establishment.

AM: Personally, I can say that I was first exposed to art by walking into your Giant Robot store on Sawtelle St. It was a show by kozyndan and I walked away with a large canvas print. Before that experience, I had thought art was something you look at in museums and not something that I could ever afford to own. Don’t know if anyone has related a similar story to you, but what is it about the art you show that makes it so accessible to people do you think?

EN: This is a great compliment. Thanks. This is exactly what we strive for. We’re not necessarily into the “art world” and we’re certainly not into “bad art.” What we’ve done is to create a place and space where anyone can walk in and hopefully have an equal chance as a billionaire art collector to purchase a nice piece of work. I’ve seen an 11 year old buy art from us and I’ve seen him come back and get another. Some of our art is higher priced, but at the same time, there might be something that’s $20. I’d say I’m decent at scouting talent, so Giant Robot is also a place to find tomorrow’s “stars.” We try and treat every customer the same and give artists a chance. 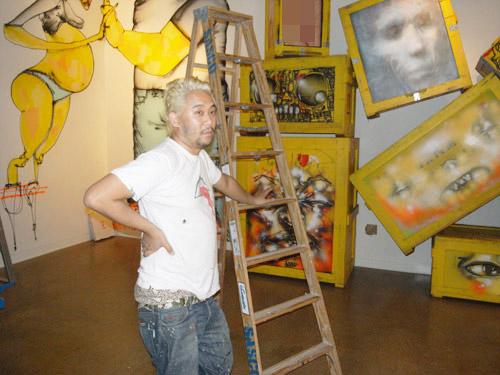 AM: Many of the artists in this “scene” happen to be Asian. Is this more of a recent phenomenon or was it this way from the very beginning when Giant Robot started? Would love to get a perspective from someone who has been around longer than we have.

EN: Because Asians can draw? This is funny and I’ve actually noticed, but never tried to contextualize it. It seems like a recent phenomenon for sure and not just in this scene. Perhaps it’s just the coming of age of second and third generations of Asian Americans. Their parents bust ass and come here on a boat, then their kids work pretty hard doing some kind of labor job, some become doctors, etc. Then, their kids are the ones who are afforded the chance to do something that’s considered a luxury – art. How’s that for freakanomics? I know that art schools have a ton of Asian kids in them. 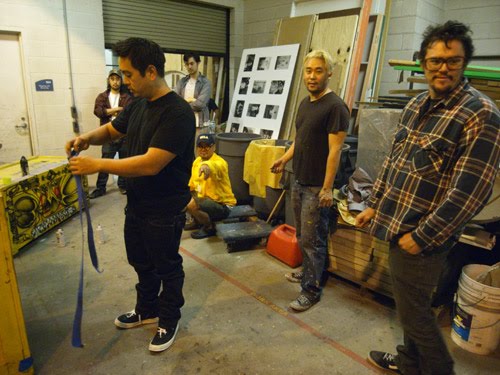 AM: Have you seen more of an acceptance by the general public of the more “illustrative” or “anime-influenced” art. What are some of the factors that have contributed to this? Is it just a matter of different tastes of a younger generation?

EN: Yes, I know this is something we’ve worked on. Everyone can relate to illustration as compared to an expressionistic painting. It’s easier to access, and great illustration is sort of the culmination of being a “sketchbook kid.” Kids who grew up drawing wanted to render well. Often times, a good illustration is a kick ass rendering. Yes, it’s been more accepted and gladly so. It’s easier to enjoy since you know what’s going on, and you know how hard it is to do. It asks less of a viewer in terms of figuring things out and quickly dazzles the eye with great line work. I remember when great illustrators were selling their illustration work cheap because they never thought of it as art. Today I think people see the hard work of an illustration and they see the value in that rather than a few strokes of a brush to comprise an “arty painting.” But, I like “arty” paintings too. 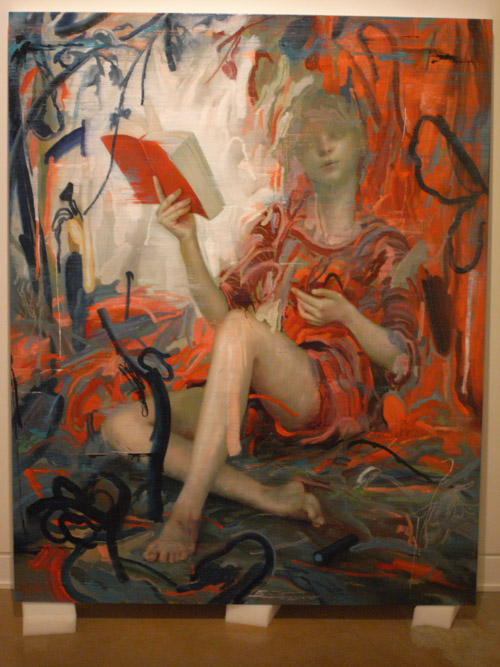 AM: Fifteen years is a long time. What are you the most proud of that that has come from the growth of the Giant Robot brand and culture?

EN: First, thanks for calling it a brand and culture. I’m proud of that! Yet, you also mention fifteen years, and longevity is always important in business. Being around this long and still contributing to a greater good, a fun culture, and to peoples’ upbringing is something to be proud of. I’d like to think we still have our integrity in act. If you can do that, I think you’ll be fairly happy. 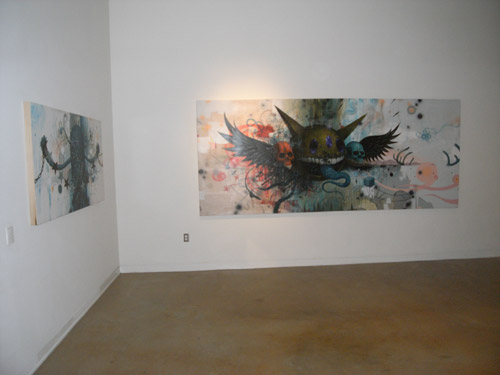 AM: Where do you see happening with Giant Robot in the next 15 years? Any goals or long term plans you can share with us?

EN: In the next 15, I hope we can adapt our company to our own interests as they change and grow. I can’t tell you of any long term plans in terms of details, except to keep doing things with the same levels of fairness that we’ve been using for the first 15. We never had long term plans in the first place except to try and do the right things. I’m not sure how people can have long term plans in such exciting times. I’d think the plan is to have no plan.

AM: Thanks for your time Eric and good luck with the exhibition.Â  Check out more details as well as all articles related to this show here.