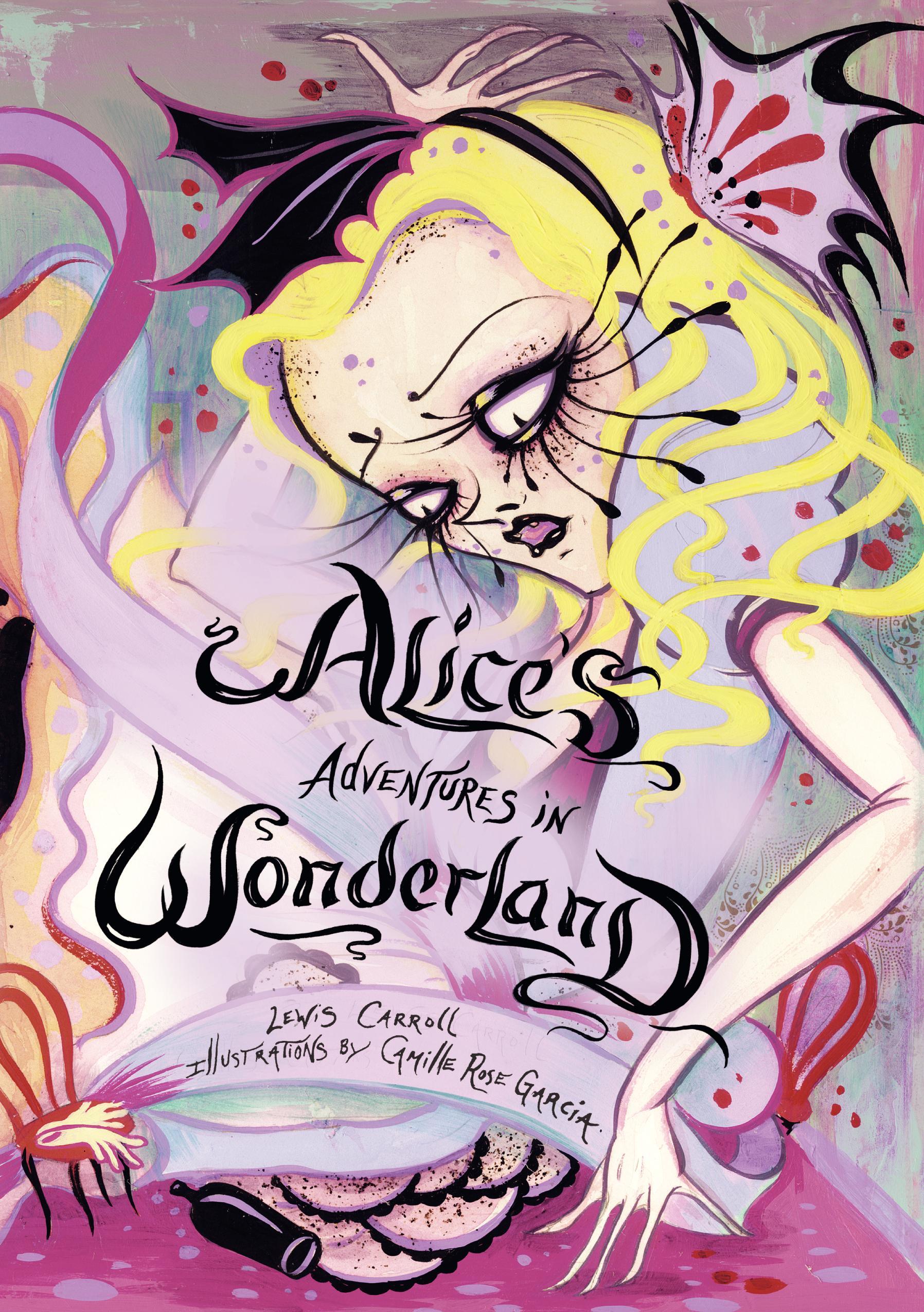 In anticipation of Camille Rose Garcia’s upcoming exhibition and book signing at Merry Karnowsky Gallery this weekend March 6th, we talked to the artist a little bit about her work on the “Alice in Wonderland” book that was released last month among other things.  If you can’t make this signing, she’ll also be in Portland, San Francisco, and Seattle.

Check out the full interview after the jump. 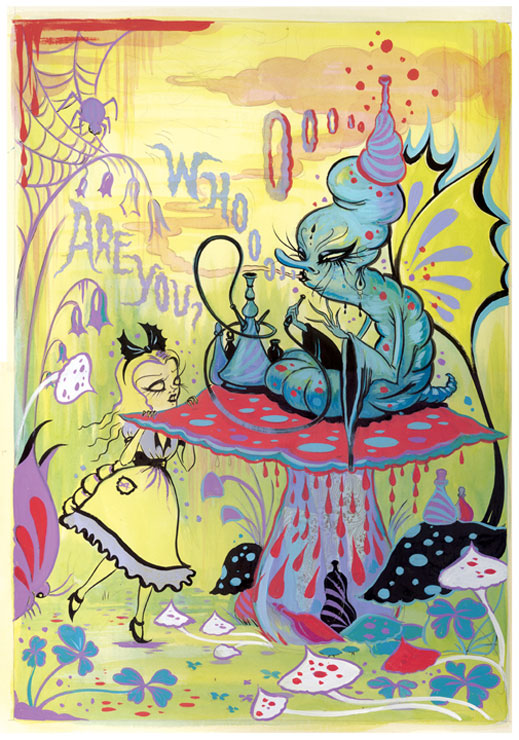 Arrested Motion (AM): Alice’s Adventures in Wonderland was originally published as an illustrated novel by “Lewis Carroll” as you know. Did you and if so, how much did you use the original illustrations as reference? Or, did you imagine up everything yourself?

Camille Rose Garcia (CRG): I am a mad book collector, and I own 4 copies of “Alice In Wonderland” with the original John Tenniel illustrations, so I found it was impossible for me to think about any of the characters without automatically thinking in my head about the original illustration. So, I looked at this more as an homage to Tenniel, a way to honor those illustrations. I did use a lot of his compositions as reference, as I realized after doing a bunch of sketches, that he came up with the best composition in the first place! There were some exceptions, of course. I always hated how you couldn’t see the Caterpillars’ face in the original drawing, so I drew that one from the opposite point of view. Also, The Lobster Quadrille was never illustrated, so that was open for interpretation. 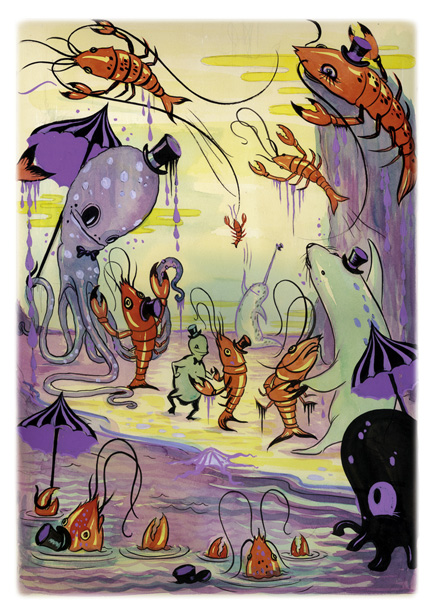 AM: What’s your favorite character from Alice in Wonderland? After this project are there any new favorites or challenges to draw?

CRG: The Mock Turtle has always been one of my favorites, he is so gloomy and non-huggable, he just looks really clammy, like he would smell like some sad old starfish you found on the beach. I’m always attracted to the most unlikeable ones, the un-huggables.

AM: We heard from Hi Fructose that you’re branching out into watercolors for this one as opposed to your usual repertoire of using acrylics. Any reason for this change of pace? How did you like this transition?

CRG: It sort of developed out of necessity, the time constraints and the amount of work dictated that I work on the artwork smaller than I normally would. I am much better at smaller work if it is pen & ink kind of stuff. So originally, I wanted to do it all in pen & ink, black & white, but they were printing the whole book in color, so my minimalist idea was out the window! So the watercolor, I felt, would work well with the delicate linework I wanted to do. Stupidly, I thought it would be faster than the way I usually layer and build up the surfaces, but it was actually way harder, and the small scale made me develop an eye tick, like a throbbing of the inner eye muscle, every time I sat down to work. The whole project practically drove me insane. 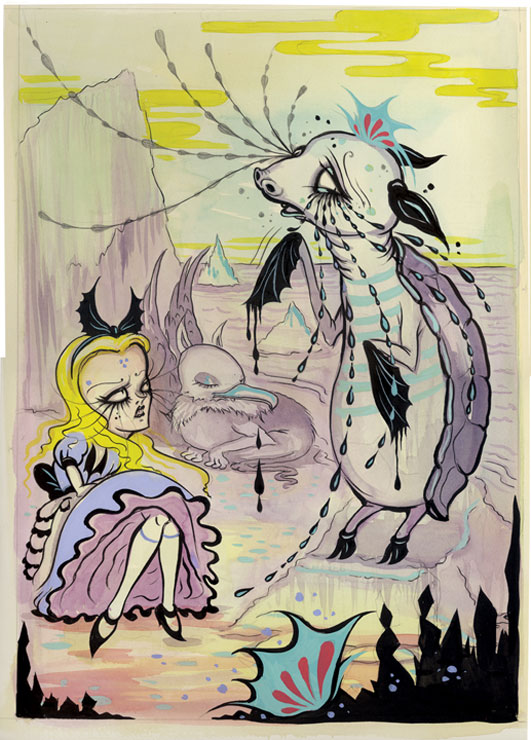 AM: Are you excited about the new “Alice in Wonderland” movie coming out? It seems too much of a coincidence that your book is being released around the same time. Was this planned from the very beginning or just serendipity?

CRG: I am very excited to see the movie! I am, of course, a huge Tim Burton fan. And yes, the project was planned to come out when the movie was released. I guess that’s how they have to pitch projects in the book world, have some kind of hollywood tie-in. It’s kind of annoying that it has to be that way, because the release date of the movie dictated my deadlines, which is lame. 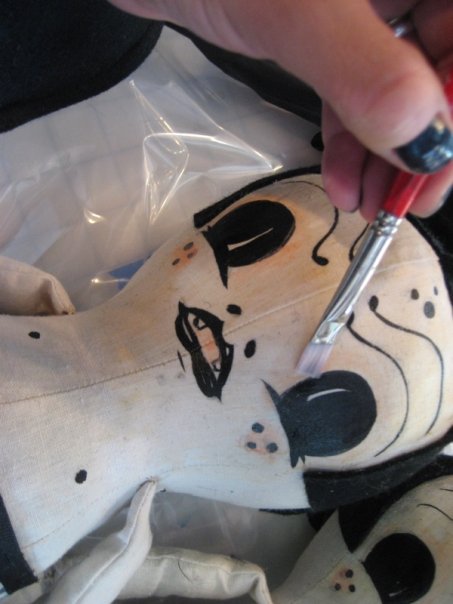 AM: We loved your recent collaboration plush figures from Pitco that you premiered at Scope Art Fair with Jonathan Levine Gallery. Should we expect some new character designs in the future?

CRG: Thanks! Yes, I have a new design, “Jr. Eggbert” that will be available in the next few weeks. PITCO is such a labor of love, it is really DIY and I only make about 25 dolls at a time, so that’s why the availability has been so spotty. I have been trying to avoid mass producing anything, but that makes the production process harder because no one wants to make 25 or 100 things, they want to make 1000 things. Sol until I have the PITCO headquarters set up, which will probably be in Portland, Oregon, it’s just going to be a very little empire.

AM:  You did a poster for Death Cab for Cutie. Any other bands/projects we should be seeing you workingfor 2010?

CRG: None lined up at the moment, but I do love working with bands, I would love to do an animated video, that would be cool.

AM: Thanks Camille, we look forward to the Jr. Eggbert release in the next few weeks and good luck with exhibition/book signing at Merry K’s this weekend! Other locations on the signing tour include – March 8th – Booksmith, San Francisco, March 11th- Powell’s Books, Portland, March 13th- Roq La Rue Gallery, Seattle.