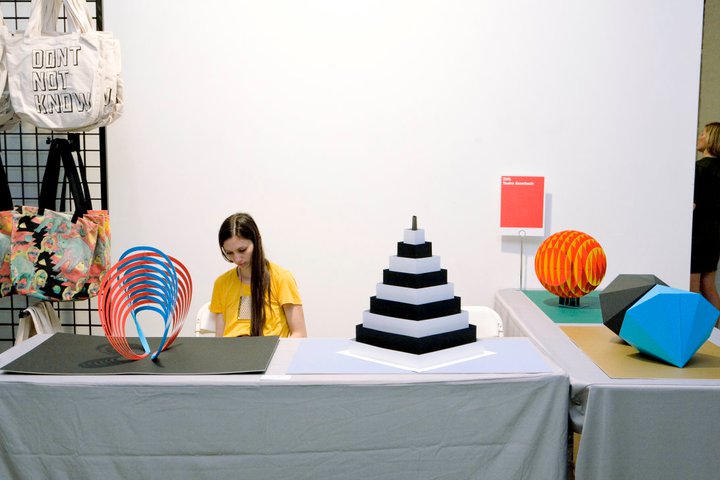 A little over a month ago at the NY Book Fair, organized by the largest non-profit dedicated to publications made by artists Printed Matter, Tauba Auerbach unveiled the beginnings of an intriguing and gravity defying pop-up book. On the heels of her powerful solo exhibition, The W Axis (covered), as well as a blowout result at a recent charity auction where one of her much sought after Fold paintings reportedly sold for nearly 10x the estimate, the scalding hot contemporary artist has condensed her methodical scientific vision into book form. Known for her perception bending compositions and alarming technical proficiency, it appears the artist has bestowed those same principles into these complex pop-up creation. There will be six “pages” total, unbound in a slipcase (each 20″ x 32″ when open). No release details have been slated as of yet by Printed Matter, aside from their initial press release, but we will provide an update when possible.

Also worth highlighting at MoMA PS1 that weekend, Aurebach attempted to translate her visual language into theatrical form during MOVE!, a series of collaborative performances and temporary installations created by fourteen fashion designers teamed up directly with fourteen artists. Partnered with Ohne Titel, the bi-coastal artist, who splits her time between New York and San Francisco, exhibited her creative dexterity with a intricately choreographed dance routine involving beautiful woman dressed in post-modern, space-like costumes. Another fascinating piece of performance art illustrating the impressive range of the endlessly talented and ever-evolving artist.

As a much anticipated sidenote, Tauba has just revealed that she will now be represented by New York’s Paula Cooper Gallery, with a solo exhibition scheduled sometime in 2012.

Many more images of the pop-up book, as well as the performance rehearsal, after the jump.