Three weeks ago, AM attended the London preview for the pop-up exhibition Richard Hambleton New York. Upon entering the venue, it wasn’t immediately clear whether we’d arrived at an art show or a fashion show. The heaving crowd and large amount of perfume in the air may have disoriented us slightly; we were left hesitating between taking pictures of the art on the walls and the clothes people were wearing. What’s certain is that the event was glamourous, and it’s been a long time since we’ve been in the presence of such a selection of shoes worth fetishising over. Although Richard Hambleton himself didn’t make an appearance, the atmosphere probably wasn’t dissimilar to a Mary Boone Gallery opening circa 1984 — but with less sex and drugs, and no catering by Mr Chow.

This was the latest stop of a touring exhibition first launched in New York during the city’s Fashion Week in September 2009, before it travelled to Milan in February, Cannes in May and Moscow in September. The show was curated by dealers Vladimir Restoin Roitfeld and Andy Valmorbida. Restoin Roitfeld is the son of Carine Roitfeld, the editor-in-chief of French Vogue and one of the most influential women in fashion. Together with Valmorbida — whose younger brother PC co-owns the relatively new and impressive Prism Gallery in Los Angeles — he’s sought to push Richard Hambleton back into the spotlight after a self-imposed, relative obscurity by the artist that lasted more than two decades.

For those with both the interest and attention span, see more photos and long-winded text after the jump. 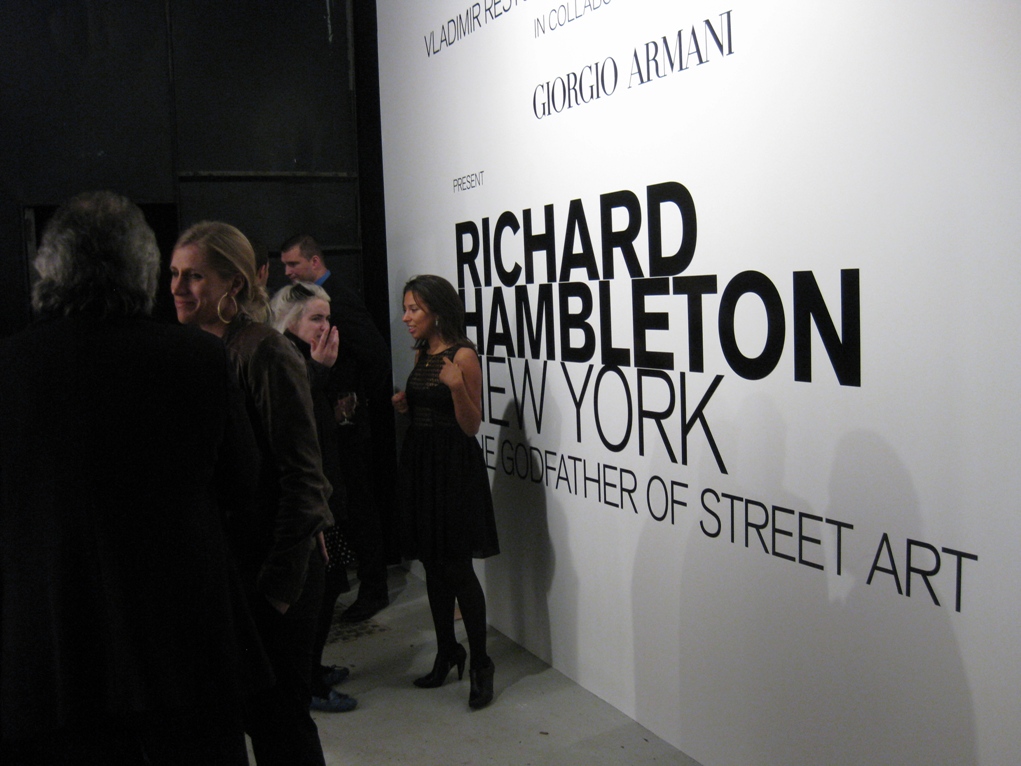 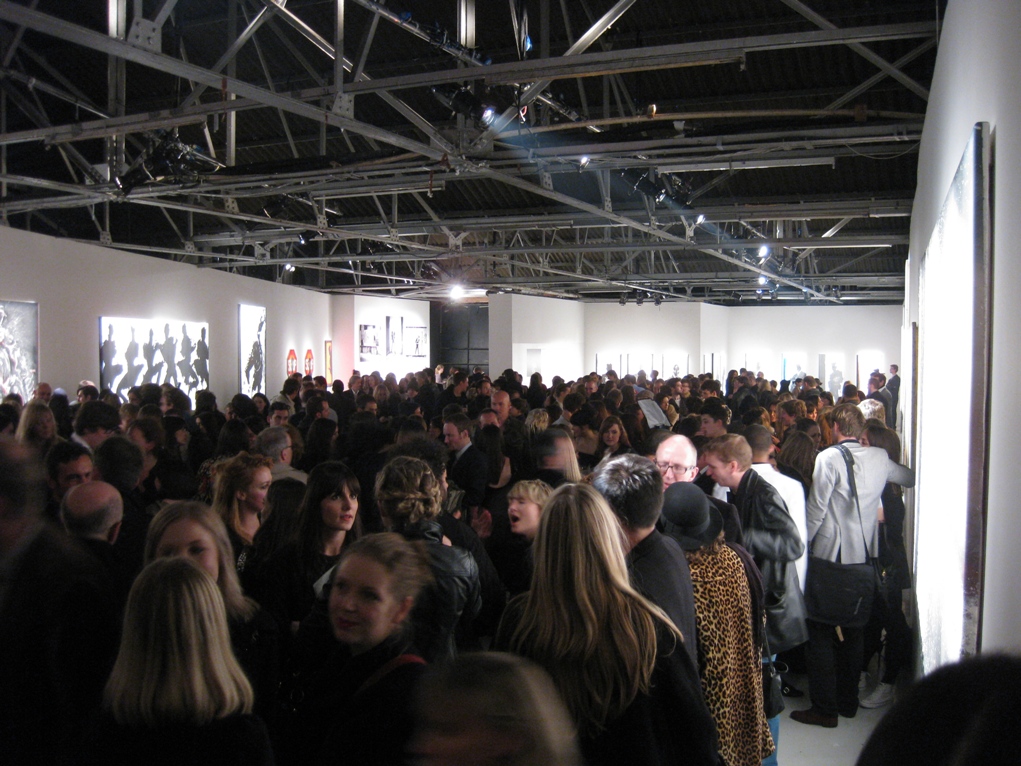 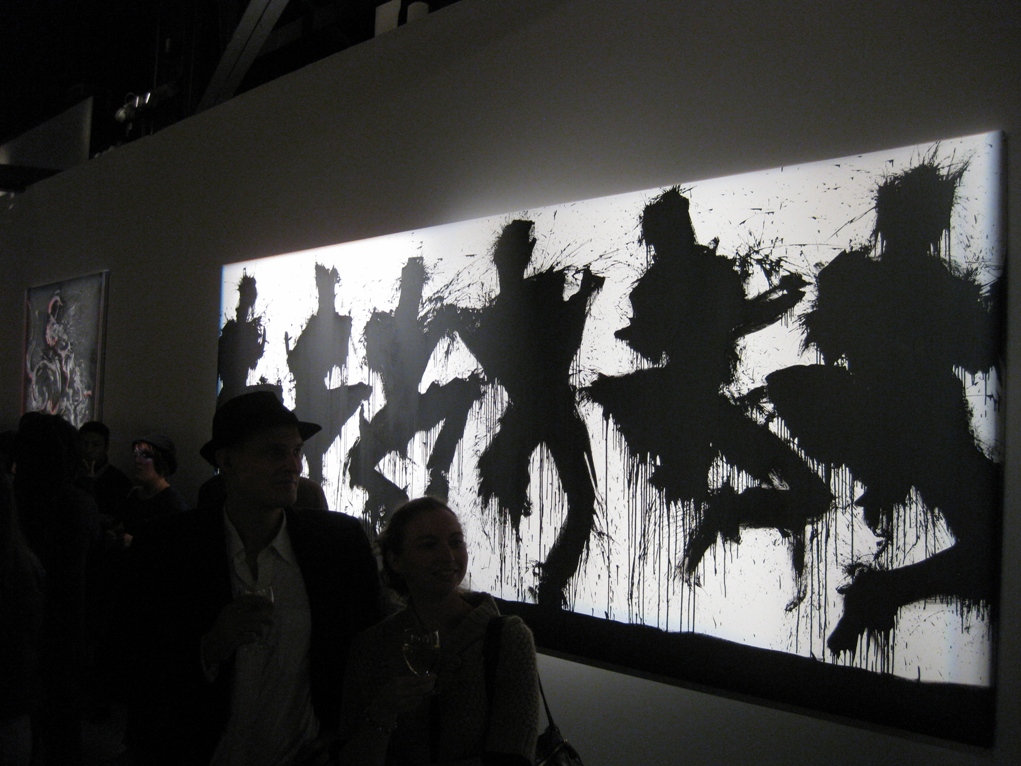 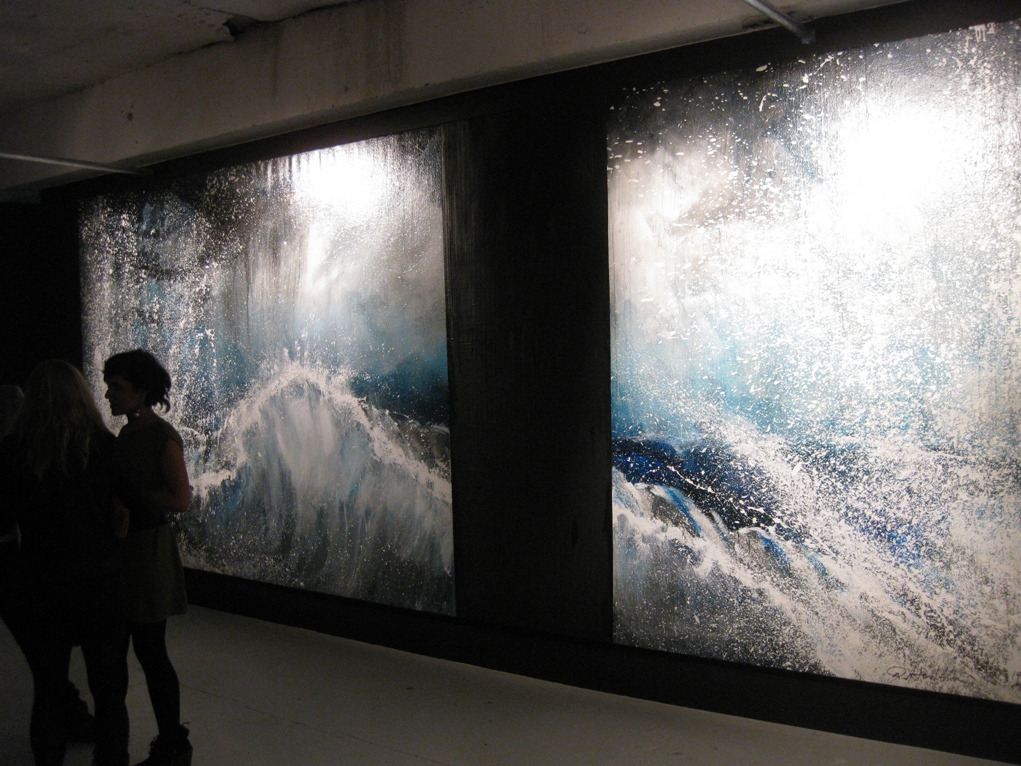 The Dairy in the Bloomsbury area of London, with its vast space and polished concrete floors, was an inspired choice of location for offsetting Hambleton’s art. Of the 45 or so works on display, we understand two-thirds were for sale, with 25 never having been exhibited before. The immediately recognisable Shadowman paintings of splashed silhouettes featured most prominently alongside seven or eight examples from Hambleton’s Marlboro Man / Rodeo series and a couple of large-scale seascapes from his Beautiful Paintings series.

Half a dozen large-format, black-and-white photographs by Hank O’Neal of Shadowman street pieces (taken on the Lower East Side of Manhattan in the early eighties) were also on display, and somewhat cramped together at the very entrance of the show. Although the inclusion of these photos was necessary for historical context and to underline Hambleton’s street credentials, a different positioning and presentation may have had stronger visual impact. 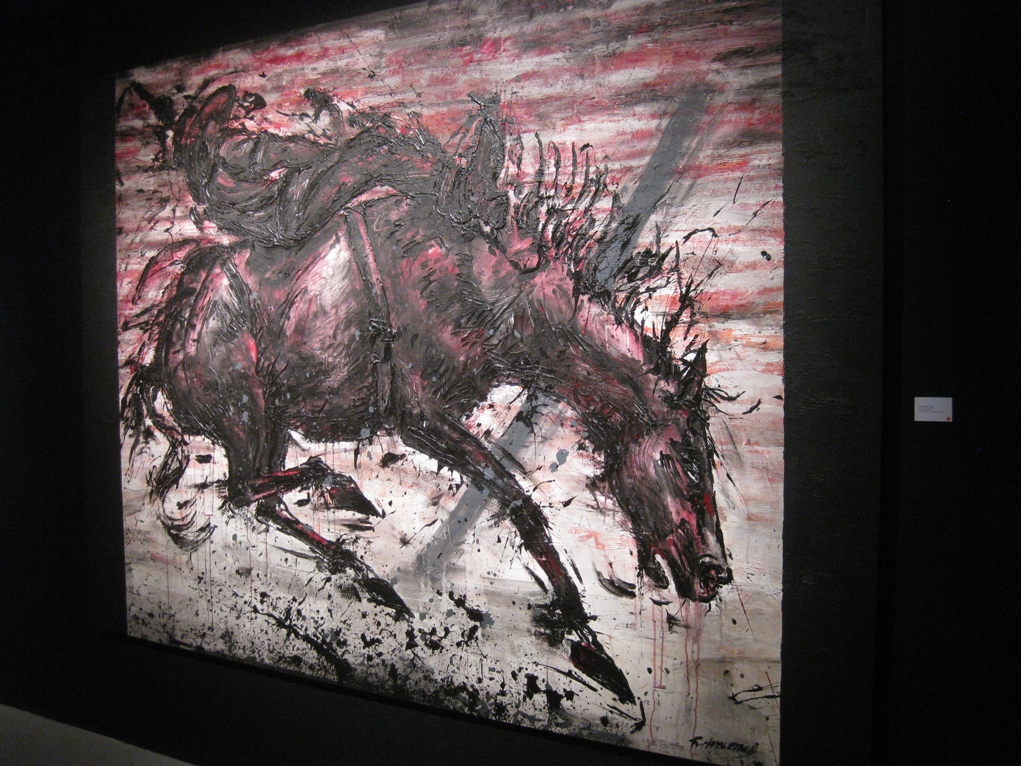 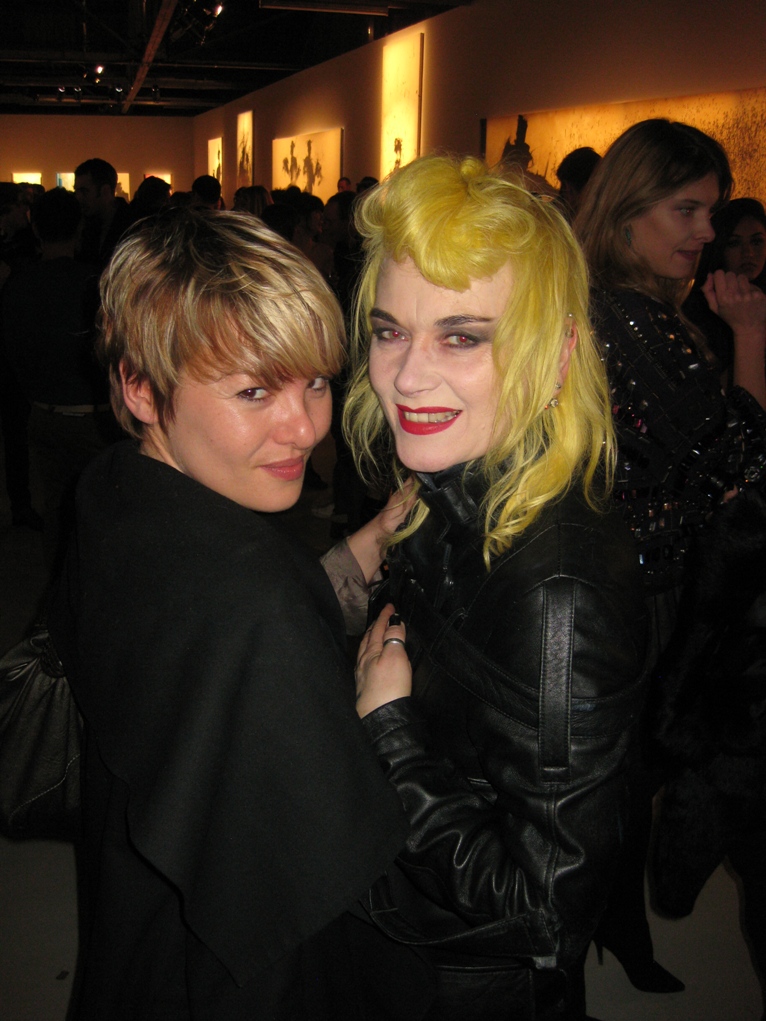 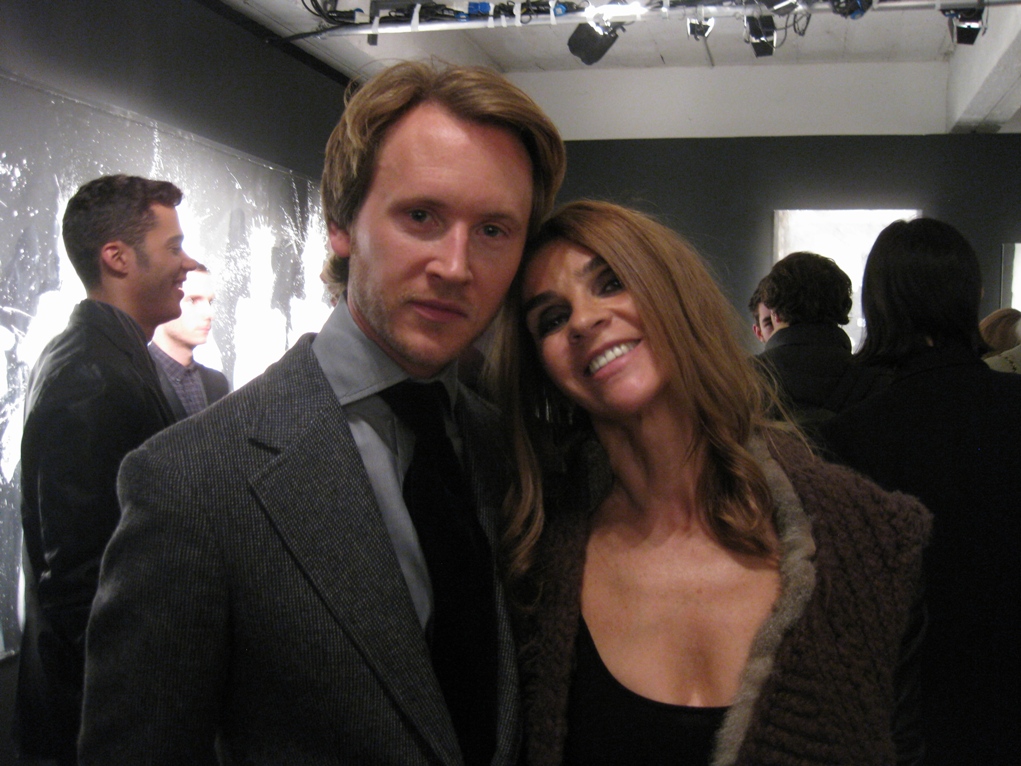 While Hambleton will always retain his crown as one of the pioneers of unauthorised contemporary public art, over the last 15 months Restoin Roitfeld and Valmorbida have been very effective at boosting the artist’s profile and ensuring he’s more widely recognised by the general public. Not surprisingly, the exhibition literature emphasises Hambleton’s position as a friend and contemporary of Jean-Michel Basquiat and Keith Haring, though there are a couple of PR-speak excesses like the show tagline “The Godfather of Street Art” (emphasis added). Confusingly, names and dates of specific paintings on the labels at the London show were sometimes different to those listed in the catalogues — and there wasn’t always consistency between the details in each of the online catalogues for the various city exhibitions.

Minor criticisms aside, Richard Hambleton New York was a well-orchestrated production, providing a good representation of the artist’s work and an excellent intro for those who had previously never seen it. AM was therefore disappointed to learn that for some reason the London show closed three days short of the two weeks it was originally scheduled for. 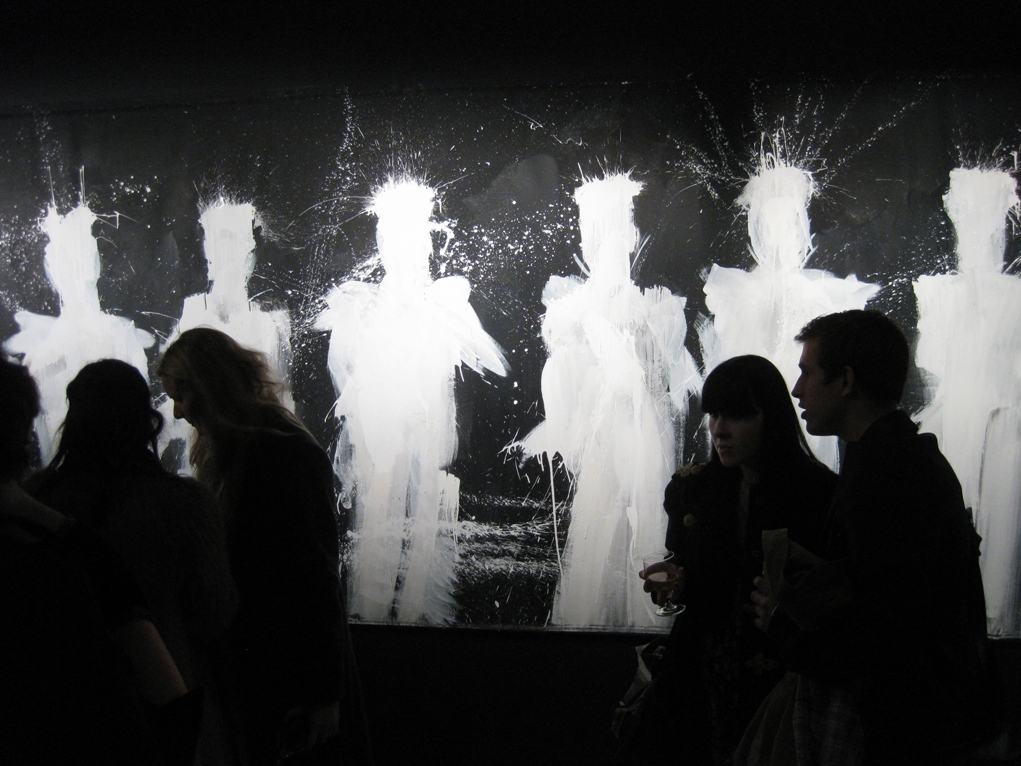 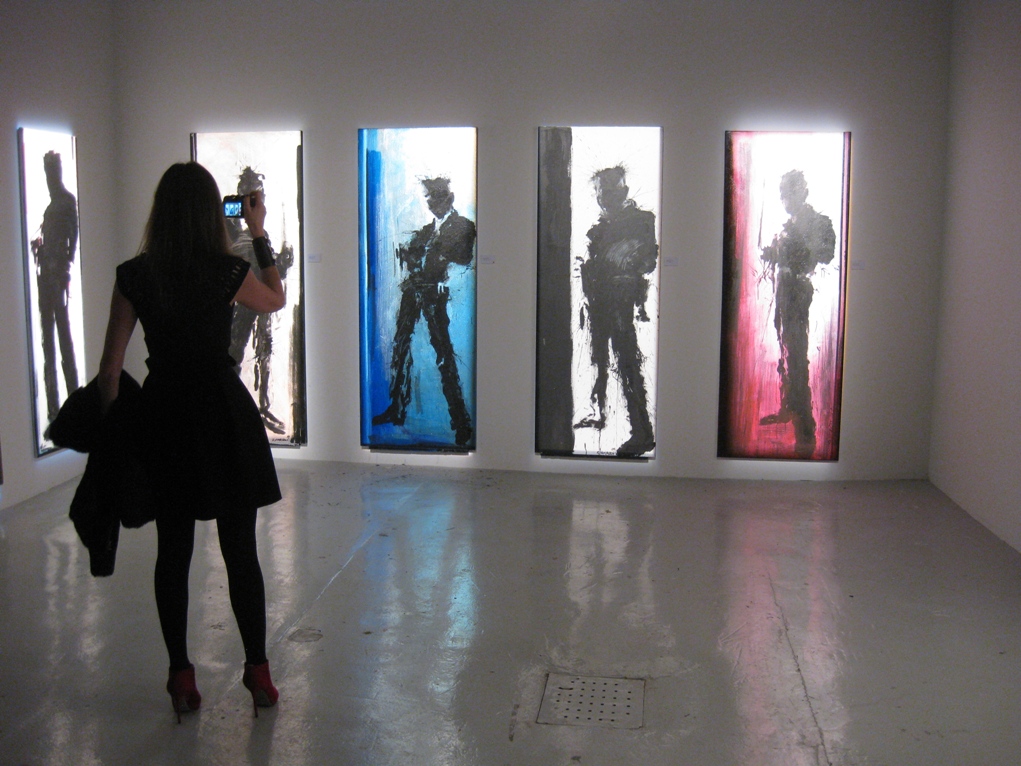 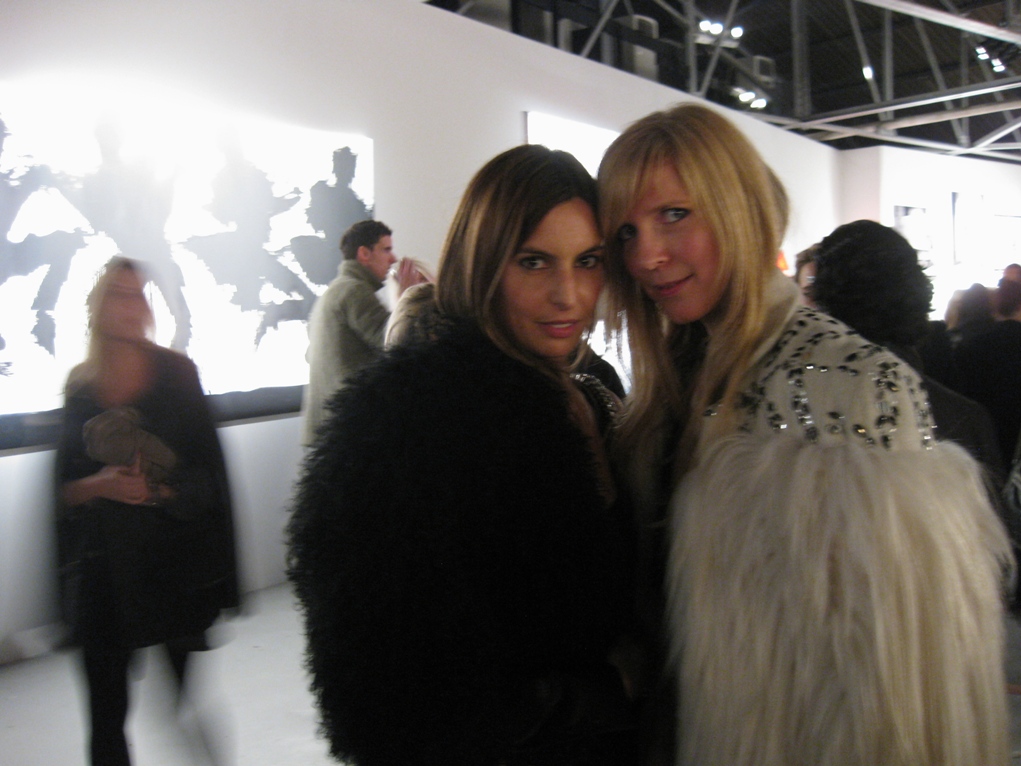 Over the last four years, seven or eight of Hambleton’s large-scale paintings on canvas (six feet or more in height and/or width) have come to auction. The sale price in each case — including for three pieces auctioned in the past 13 months — was always less than $11,000 with buyer’s premium. [A much smaller painting did go for $50,000 including premium in May, although that sale stands out as anomalous among the 66 auction results for Hambleton over the last 21 years.] One of these large canvases, titled Marlboro man, measures almost 10 feet wide and sold at Christie’s New York in October 2006 for $1,920 including premium. The same painting was in fact also part of Richard Hambleton New York, but listed under the different name of Red horse & Rider (photo inserted above).

Given the recent auction prices, AM was surprised when Andy Valmorbida confirmed to us that works for sale at the London show ranged from £40,000 to £2,000,000 (very roughly, $60,000 to $3,000,000). That’s quite a jump for Hambleton — arguably a dangerous and unsustainable one. It will be interesting to see whether, in the cold light of day, future auction results are able to mirror the new price levels for the artist on the primary market. This is a platform on which the skills of his dealers will continue to be tested.

It’s also worth mentioning the exhibition was produced in collaboration with Giorgio Armani, himself a keen collector of Hambleton’s work. The crossover between fashion and contemporary art was of particular interest to AM. As referred to above, a very strong fashionista contingent certainly made its presence felt at the opening reception in London, introducing a dynamic to the atmosphere which was different to that of a typical art show. 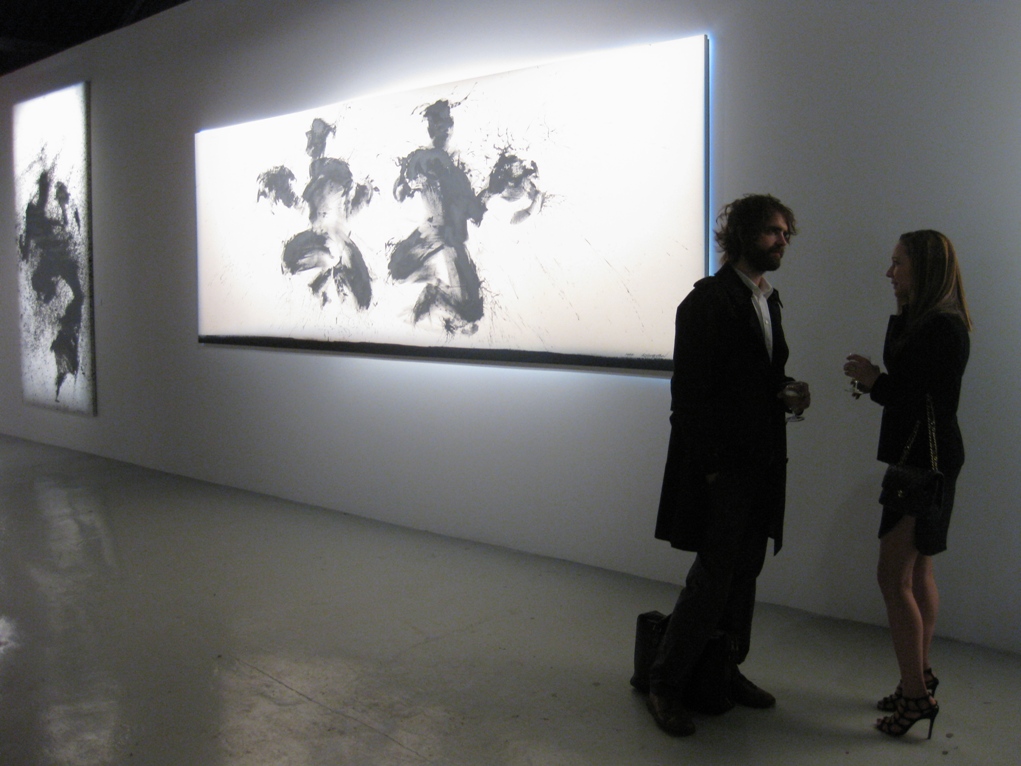 On the right: Twin Jumping Shadows, 1999 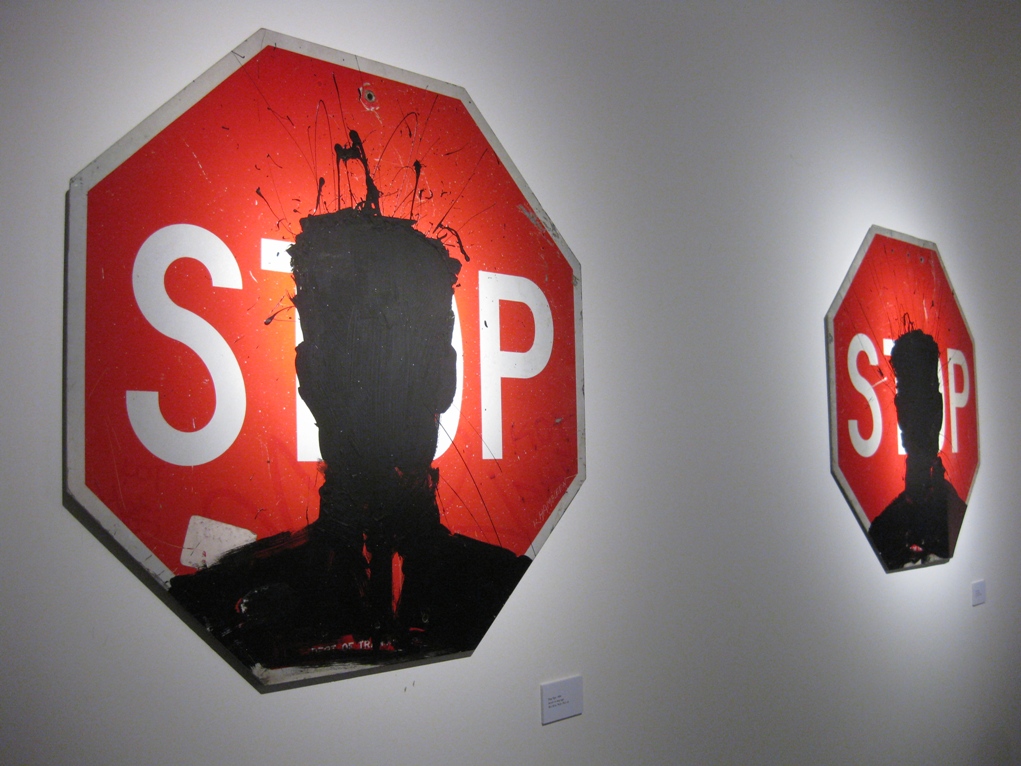 The fashion industry aligning itself with the art world is nothing new, since the industry regularly bankrolls museum exhibitions and art fairs. Louis Vuitton sponsoring © MURAKAMI at MOCA three years ago is one of the most blatant examples. That exhibition even featured a fully-operational Louis Vuitton boutique, which seriously blurred whatever line there was left between art and commerce. Fashion houses and other luxury good producers also provide gallery spaces which they or their foundations manage, like the Fondation Cartier in Paris, or fund art prizes like the coveted Hugo Boss Prize organised in cooperation with the Guggenheim Museum.

Such collaborations generally serve to increase the profile of the relevant sponsor and enhance its reputation and brand image. If things are done right, they should ultimately result in either more watches, handbags or designer wear being sold, or the same amount being sold but at higher prices. In this respect, art serves as a business marketing tool for fashion. What AM found interesting about Giorgio Armani’s involvement with the Hambleton exhibition was a strong sense that the reverse was also happening: high fashion — and its associations with glamour, prestige and luxury — was now a business marketing tool for art. The benefit for both the artist and his dealers of having Armani on board as sponsor was, thus, far greater than just the financial backing that comes with signing a cheque.

Restoin Roitfeld and Valmorbida have been open about their ambitions of finding different ways to showcase, promote and sell art. Their partnership with Armani doesn’t appear to have done them harm so far. That said, if art starts to become packaged and sold like fashion, then hopefully it’ll be viewed and treated by collectors more like a classic Yves Saint Laurent Le Smoking tuxedo suit than as a one-season passing fad.

On the right: Twin Jumping Shadows, 1999

Photo by Hank O’Neal of a Hambleton street piece