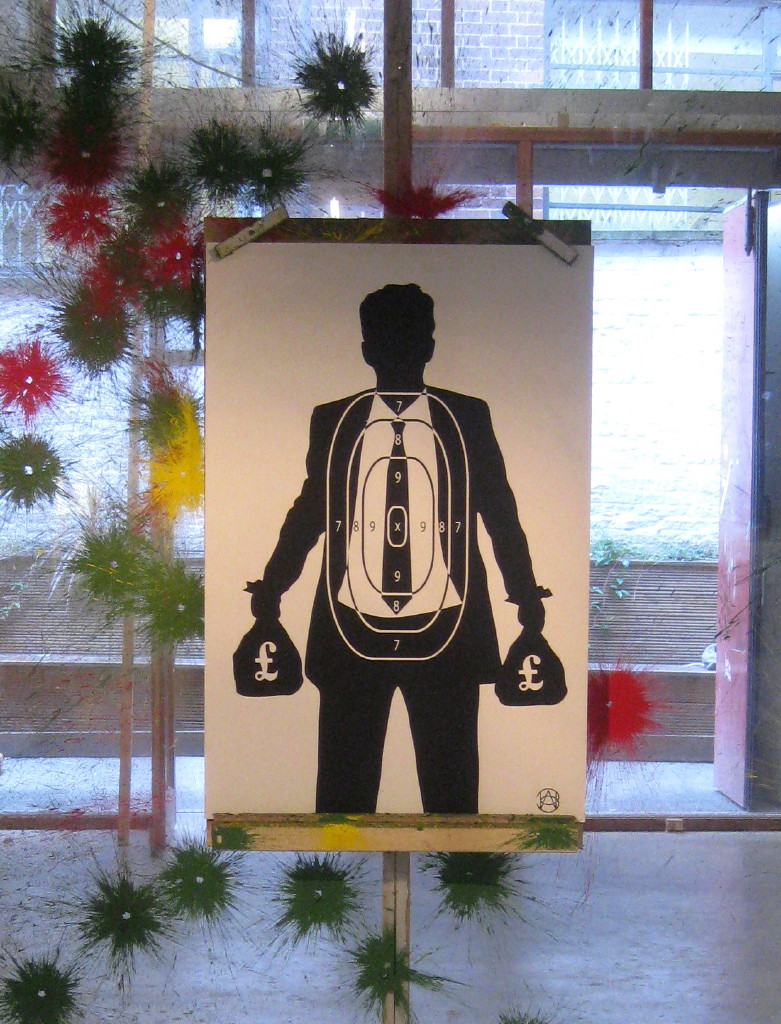 Black Rat Projects in London recently hosted [email protected], a three-day event running from 5 to 7 May which launched @earth, the new photo-essay by Peter Kennard, assisted by Tarek Salhany. The exhibition also showcased a collection of works that packed a punch by former armour designer, War Boutique. Although AM felt War Boutique’s art was sometimes a little easy or obvious, at other times it was remarkable: You think it has the subtlety of an old Panzer IV, that you can see it coming from a mile away. So you quickly dart around and start dancing behind it like a loon, flicking the V, getting your RKG-3 anti-tank grenade ready — only to then be picked off by a sniper whose presence you’d been completely oblivious to. Did that make any sense? Never mind.

Both Kennard’s book and War Boutique’s contribution to the show merit further commentary. On this occasion, AM has therefore chosen to ignore (possibly at its peril) its regular, tried and trusted formula of “1-2 paragraphs of text + plenty of photos”. We’ve gone instead for “plenty of text + plenty of photos”.  Anyone with a short attention span should feel free to move along. More images and rambling after the jump. 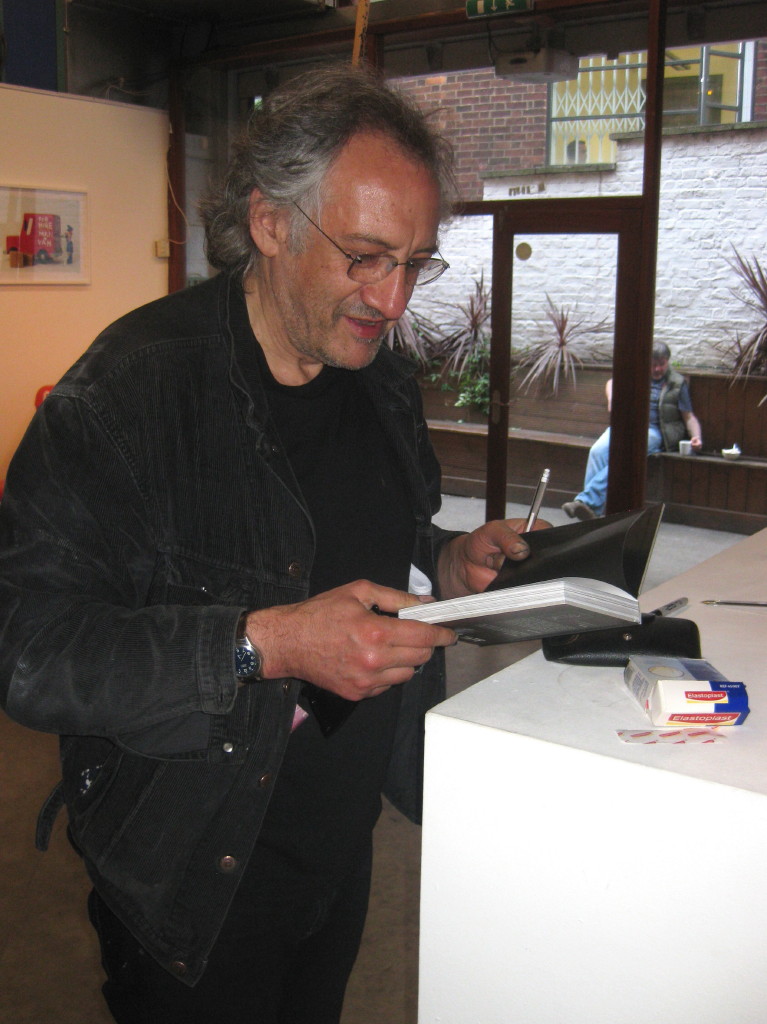 Peter Kennard signing a copy of his book, '@earth' 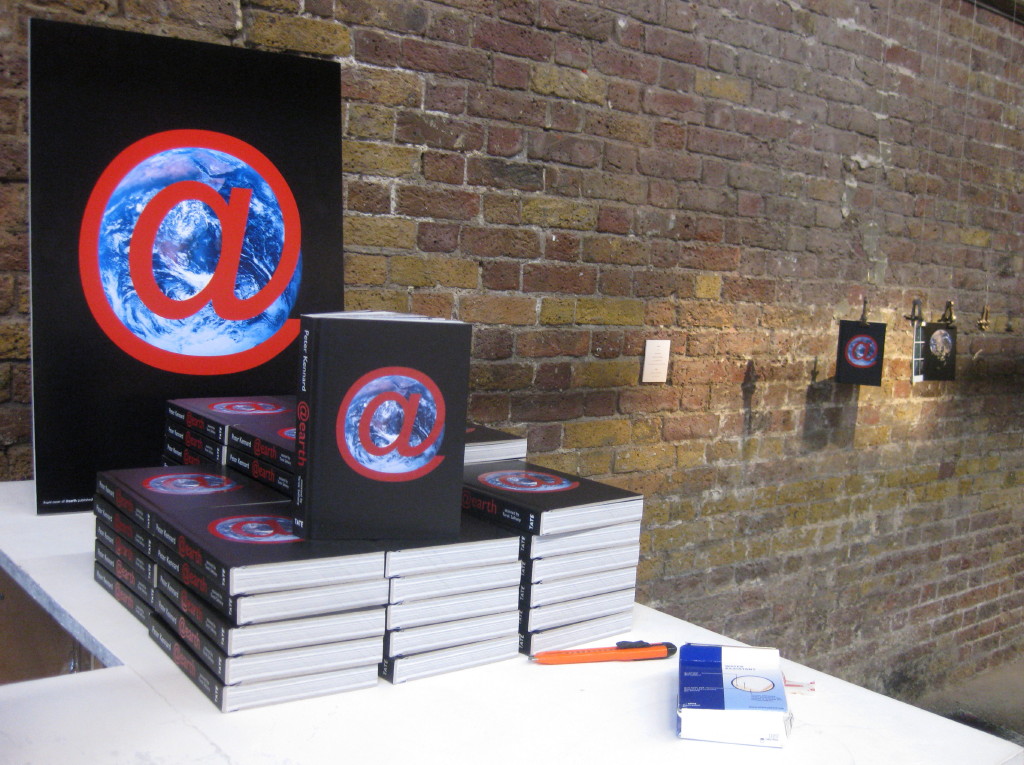 Peter Kennard’s @earth, combines both iconic photomontage imagery he’s created over the last four decades and new works made in collaboration with artist and co-author Tarek Salhany. It’s a well-produced, 192-page publication with plenty of impact — just as one would expect from Kennard. AM sensed his satisfaction when he told us about having succeeded in persuading Tate Publishing to increase the page count they initially envisaged by 20%, while at the same time standing firm on his original position that the retail price needed to remain at less than a tenner (£9.99 / US $15.95).

@earth is a book without text, and therefore without language barriers, telling its stories using images alone. It’s this clever-clever aspect which left us both impressed and frustrated about not having come up with the idea ourselves. Those looking for something to actually read are pretty much restricted to the back cover blurbs by Banksy, Naomi Klein and John Berger.

Londoners or London visitors who missed the launch for @earth at Black Rat Projects can still catch Kennard this Thursday 12 May at 7 p.m. at Rough Trade East (just off Brick Lane), where he’ll be signing additional copies. His current exhibition, At Earth, at Raven Row in East London features works from the book and is open daily until 22 May. 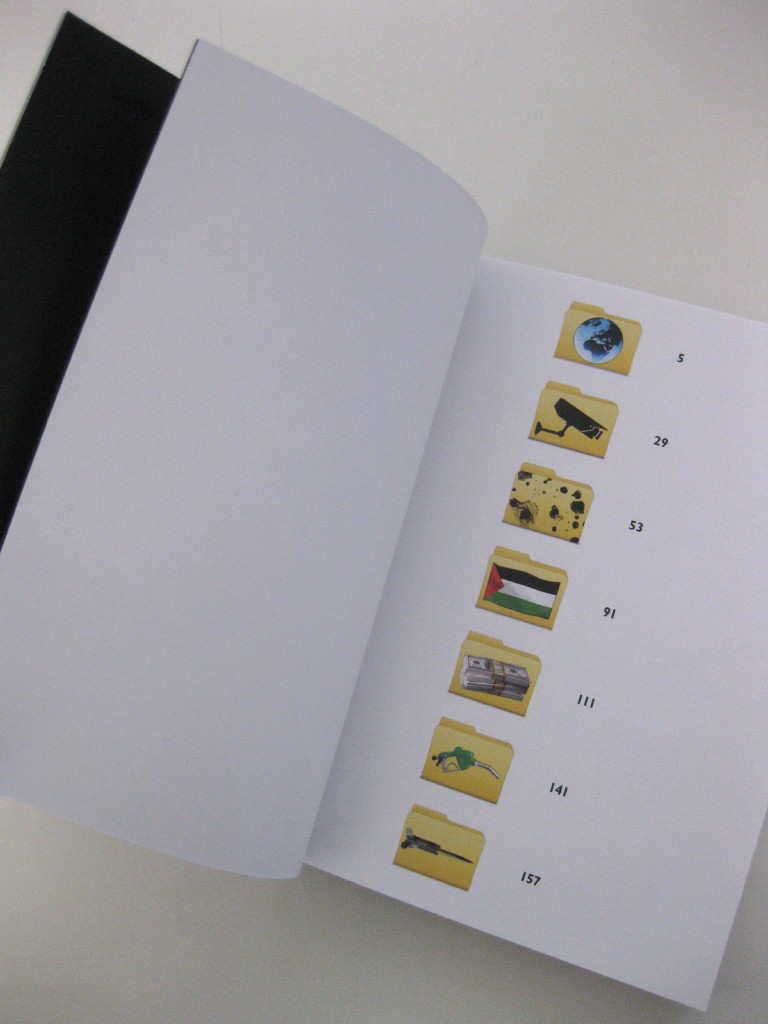 Even the Table of Contents for '@earth' is text-free

Art on display during the [email protected] show was courtesy of War Boutique. For AM readers unfamiliar with this artist, the London-based Glaswegian has a rather unconventional background: a former design director and consultant at large armour companies who spent 12 or 13 years designing armour systems for the police and military. He now uses Kevlar, ballistic nylon, chainmail and other materials he previously worked with as the raw components for much of his political and socially-engaged art.

War Boutique gained some attention as a rather reluctant participant in a documentary that aired on BBC4 in April 2010. The two-part programme called Goldsmiths: But is it Art? (which can still be watched on YouTube) followed a handful of Master’s degree students (some more likeable than others) from South London’s famous / infamous Goldsmiths College.

Visitors of the Robin Hood Tax exhibition by Mutate Britain at London’s Cordy House last year will also remember an exceptional piece by the artist entitled City Gent — the result of a collaboration with the bespoke department of the Savile Row tailors and Royal warrant holders, Gieves & Hawkes. City Gent was based on the Ministry of Defence’s Combat Soldier 95 (CS95) uniform, and made with chalk stripe worsted wool cloth covering a unique armour system: the very latest in body armour technology. Check out this photo of the work with actor and Robin Hood Tax supporter, Bill Nighy. 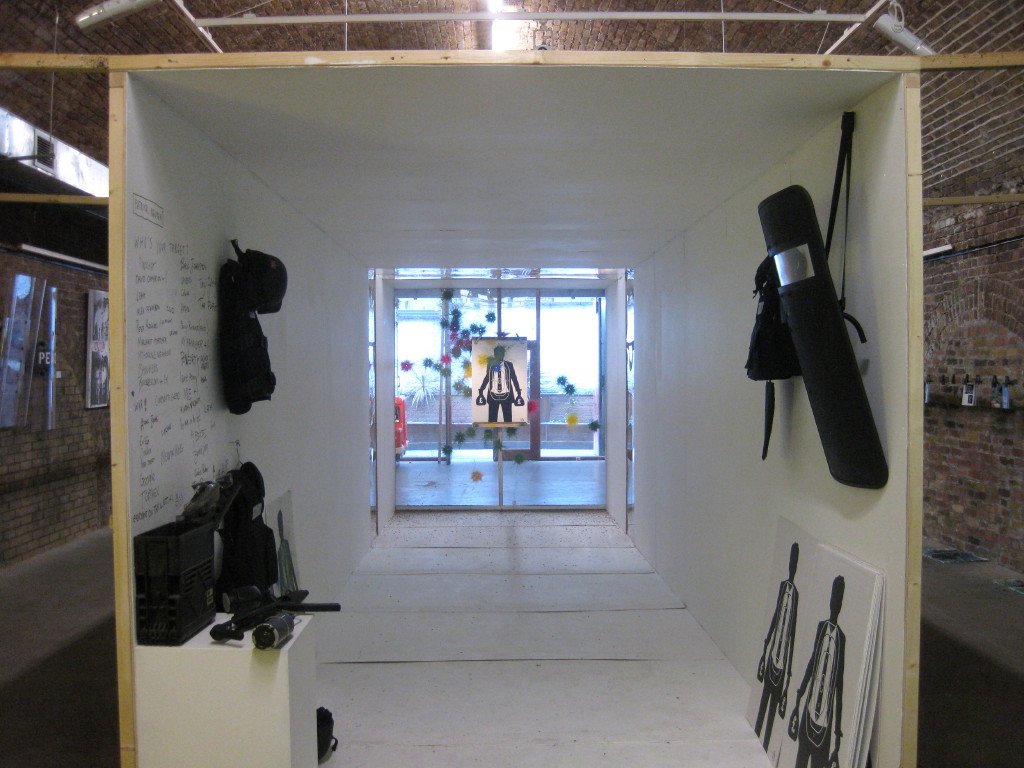 The centrepiece of [email protected] was War Boutique’s Civil Commotion, a paintball shooting gallery installation requiring the participation of gallery visitors. Although the screenprinted, ringed and numbered targets featured silhouettes of men in suits holding bags of cash, this directional element was downplayed during the exhibition. Each participant was instead asked to make a personal decision regarding who or what was represented by the target they were about to shoot. More interestingly, they were also required to make their decision public by writing their target choice on the installation wall. We hear that a number of guests on the opening night were uneasy about the idea and refused to take part. 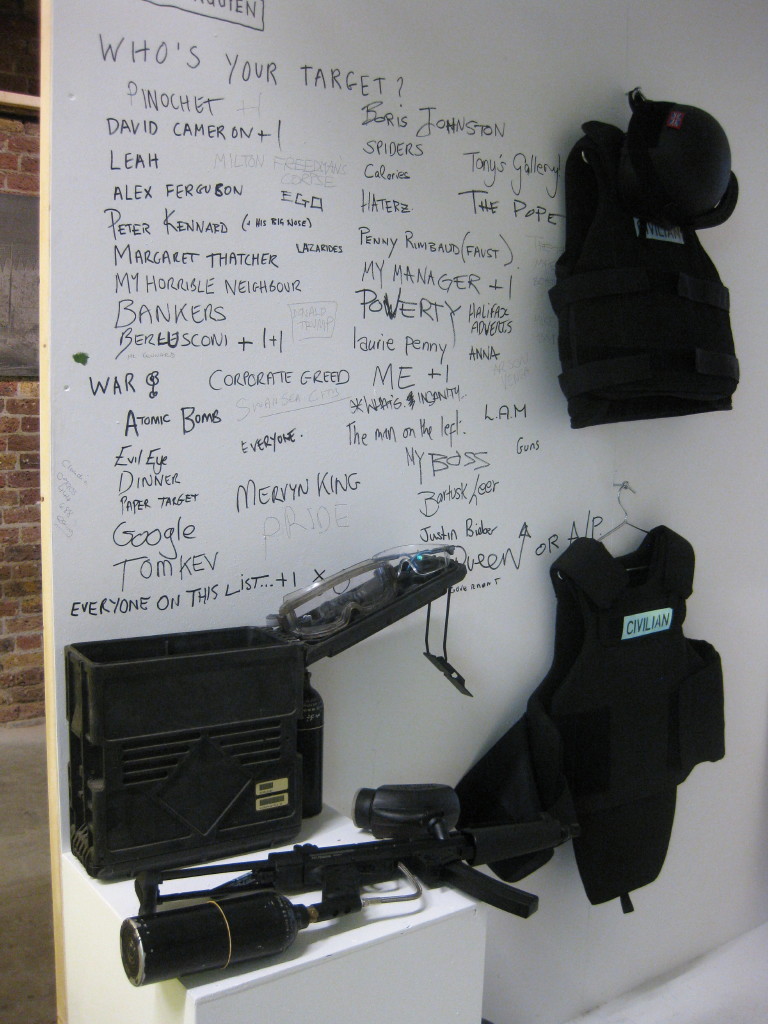 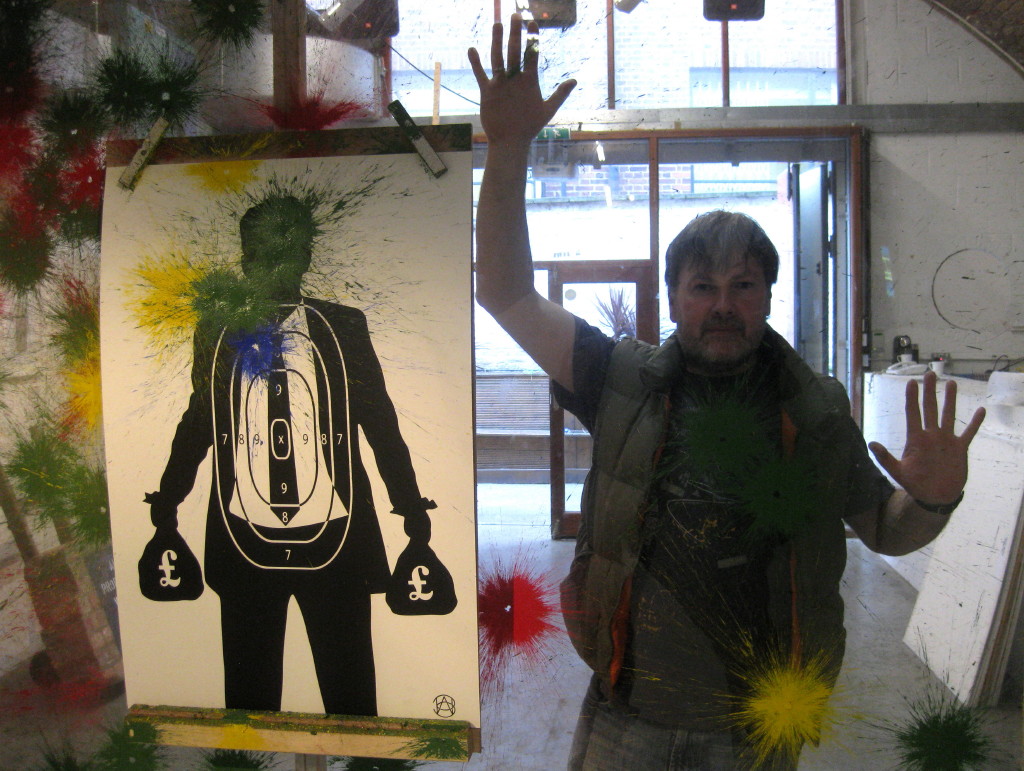 Many of the target selections came as no real surprise, including David Cameron, Silvio Berlusconi, bankers, corporate greed, war and poverty. Others were a bit random, like a former Chilean dictator who already died five years ago. AM is still trying to work out whether the person who chose Pinochet was simply unaware of his demise, or if there was actually a desire to bring his corpse back to life in order to inflict death by unnatural causes. The Latvian government was also curiously picked, along with our good friends (who lack decent PR but certainly don’t deserve to be vilified): spiders.

As for AM, we chose ourself as our target. Believing preparation is key and that it’s important to keep as many options open as possible, we figured this could be a useful test run for a potential future suicide. And without wishing to blow our own trumpet, we did rather well, which came as big relief because messing up this type of thing is generally unfortunate. 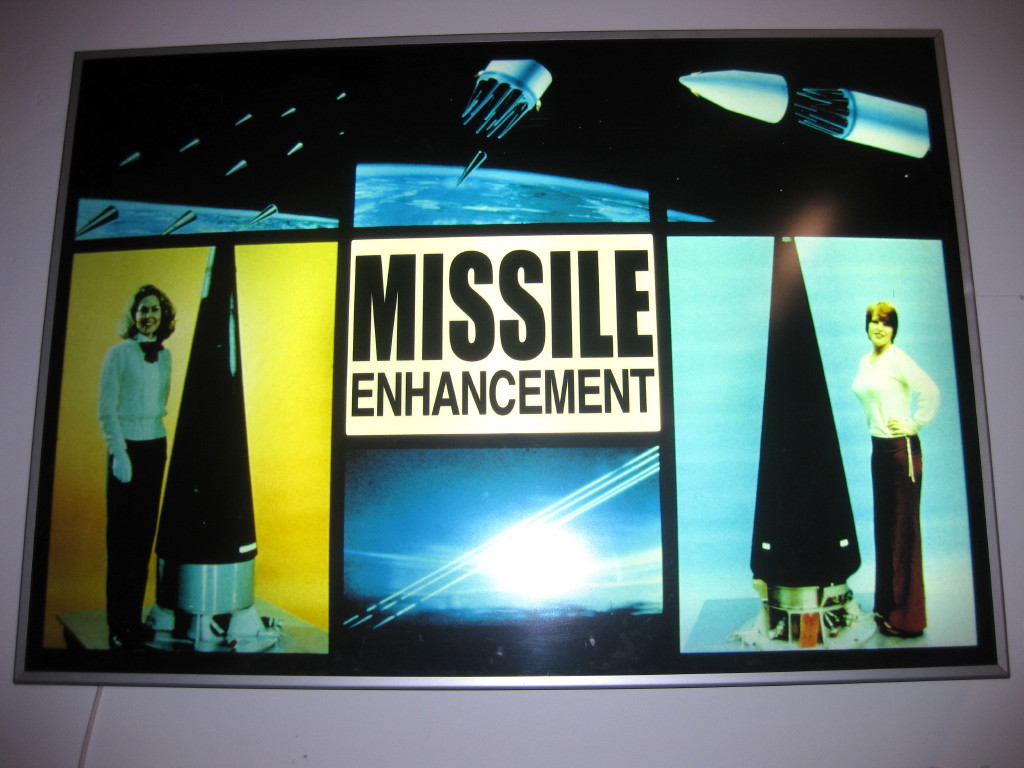 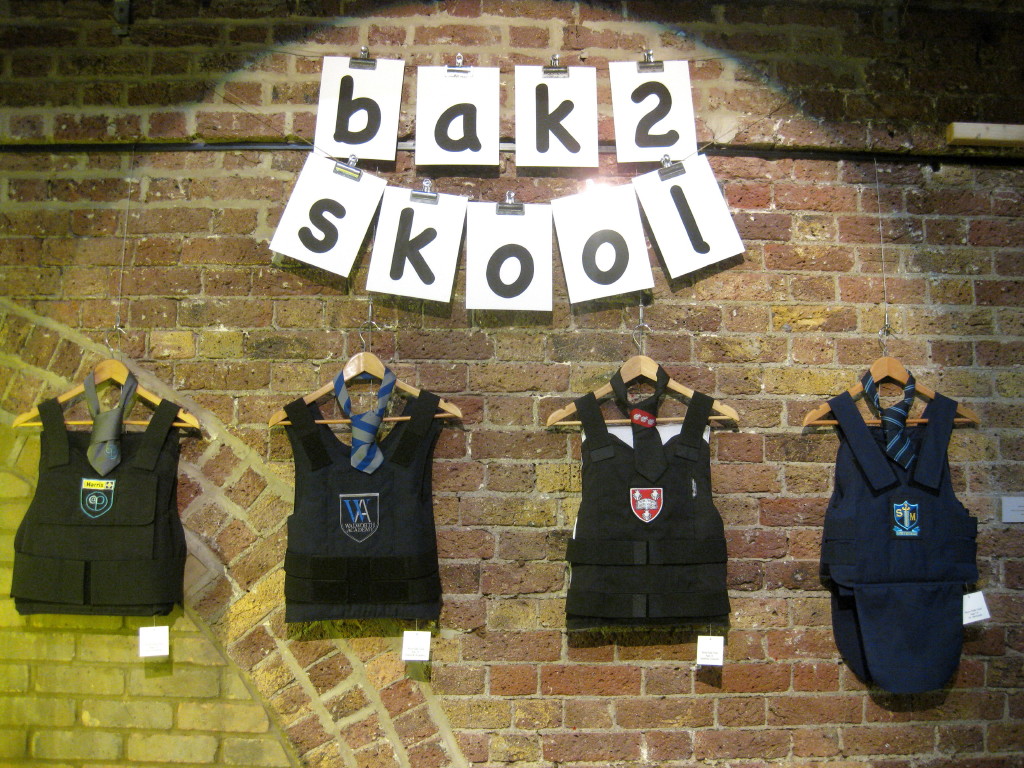 The show-stealer for us was bak-2-skool, an installation first displayed by War Boutique in 2008 in a South London shop front. The work features stab vests combined with the school ties and badges of four schools in the area (in the Peckham and New Cross districts) affected by knife violence. Each vest represents a child stabbed and killed while wearing his or her school uniform. The tags are labelled accordingly, although without the names of the actual victims.

We understand that quite a few locals came into the shop genuinely asking to buy stab vests for their children. Unlike War Boutique’s other works, the vests were only produced with pseudo-armour. Given the subject matter, the artist felt more comfortable making and viewing these pieces as props rather than real. 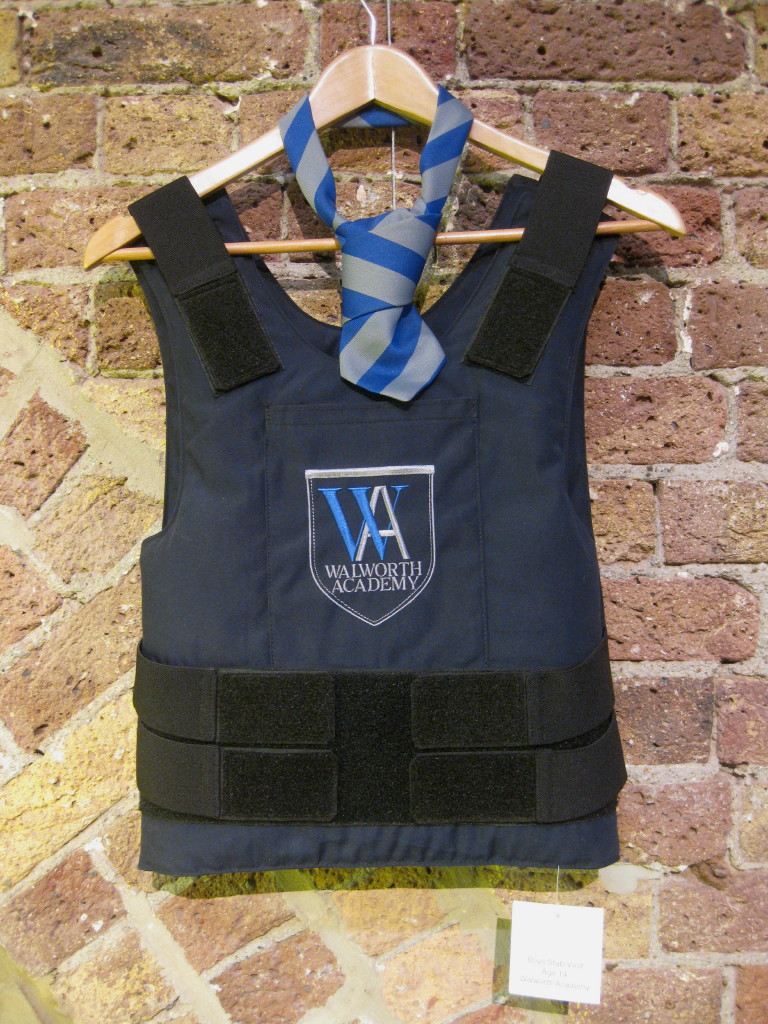 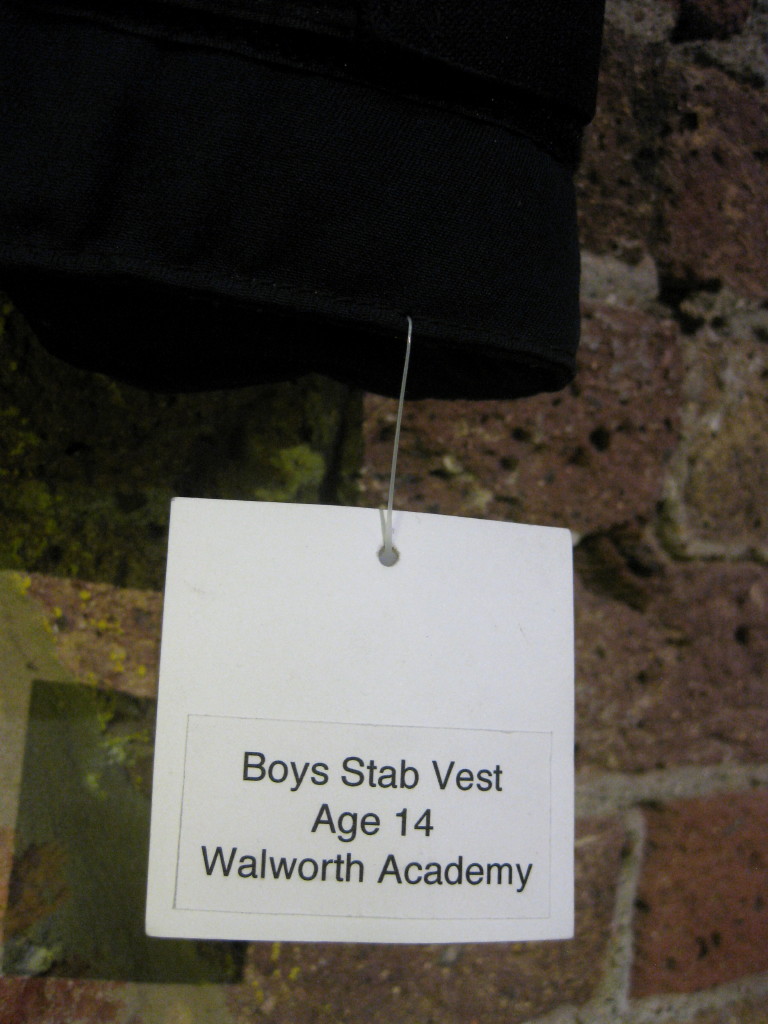 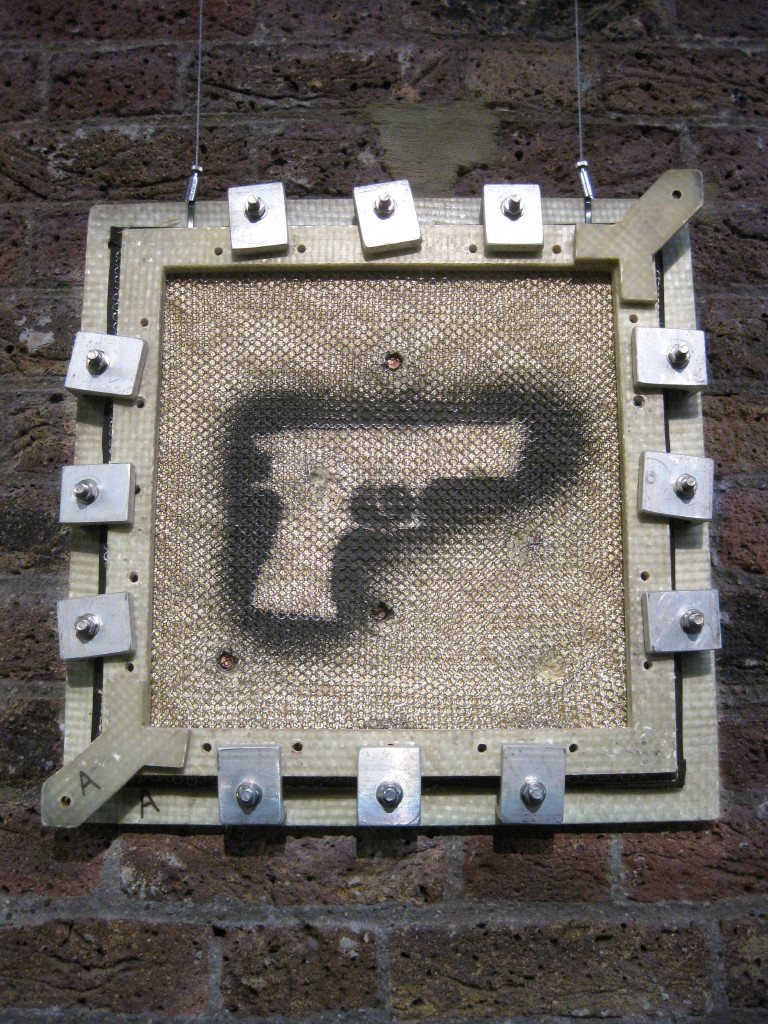 Gun features the outline of a Glock 17 pistol, the weapon used by the specialist firearms officers who killed Jean Charles de Menezes at Stockwell tube station in London on 22 July 2005, shortly after the 7/7 bomb attacks. 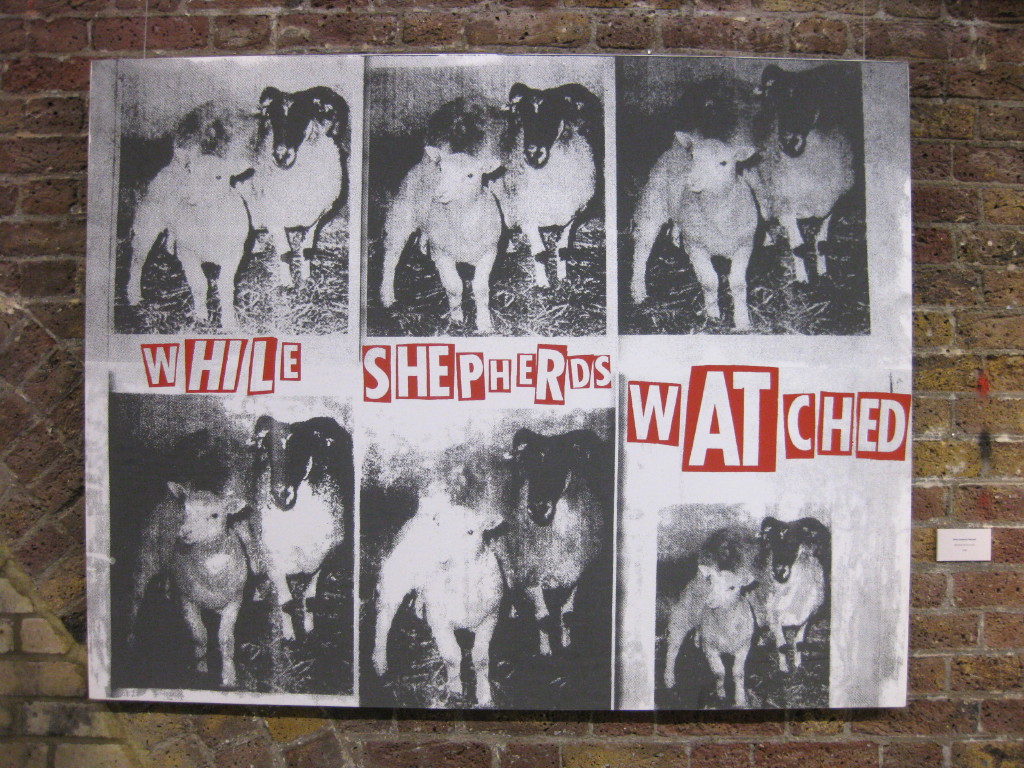 War Boutique indicated to AM that While Shepherds Watched was his first attempt at screenprinting, and inspired by Carol — the parody by Saki (Hector Hugh Munro) of the early-18th century Christmas carol While Shepherds Watched Their Flocks.  The piece depicts six silkscreened images of Dolly, the cloned sheep, and her mother.  As is the case with DNA experiments, some of the silkscreens turned out better than others.  Dolly lived for six years and produced six offspring before being euthanised due to a progressive lung disease and arthritis. 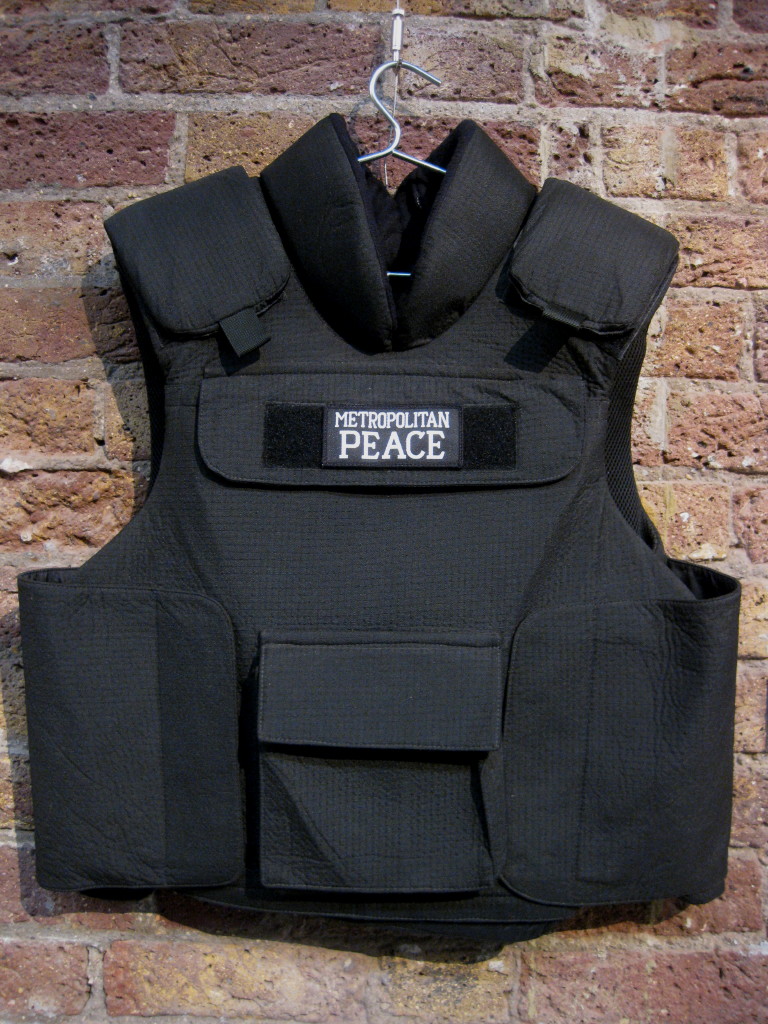 Those who visited South West England during the summer of 2009 may also recall seeing War Boutique’s Metropolitan Peace embroidered patch on one installation at a rather low-key and obscure art exhibition held that year at the Bristol Museum & Art Gallery. 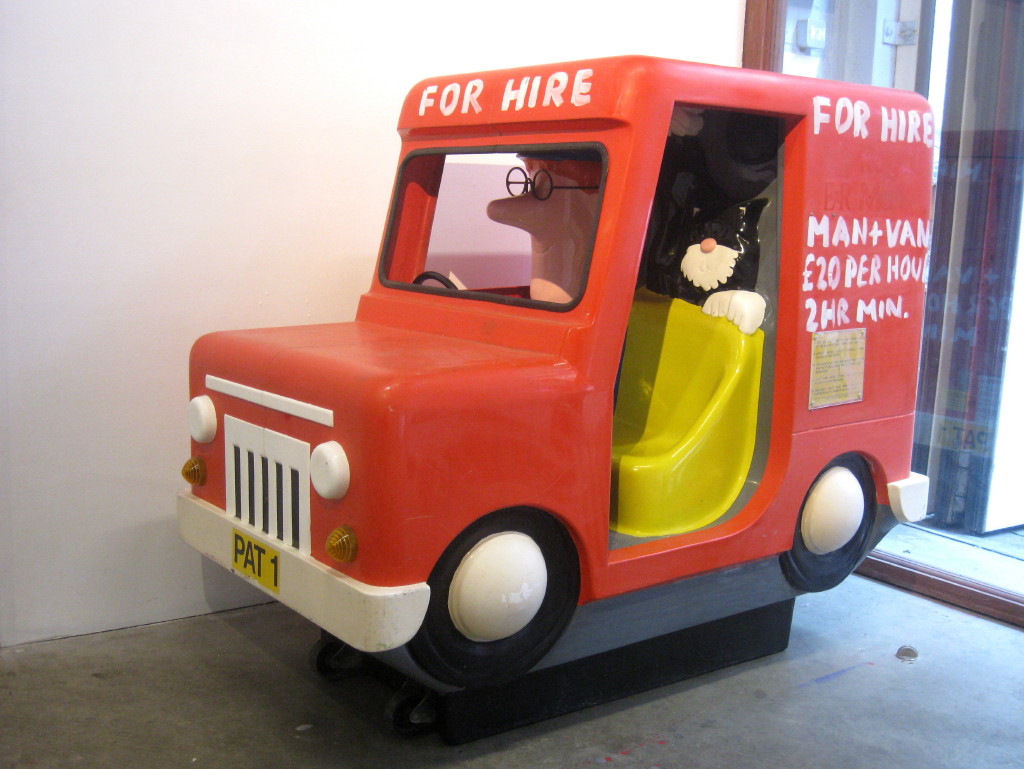 Art collectors and enthusiasts interested in War Boutique should note in their diaries an upcoming show featuring his work at Andipa Gallery, which previews on 8 June and will continue until 9 July 2011.

Peter Kennard signing a copy of his book, ‘@earth’

Even the Table of Contents for ‘@earth’ is text-free

‘Bomb Blanket’. 2005. Fully-functional bomb suppression blanket. Made the day after the 7/7 bombings in London

‘Propaganda’. 2011. Acrylic on brick. The wall comes from the recently-demolished Whitten’s Timber building (Peckham, South London) which housed the Area 10 Project Space, used to organise art events and as studio spaces for artists including War Boutique