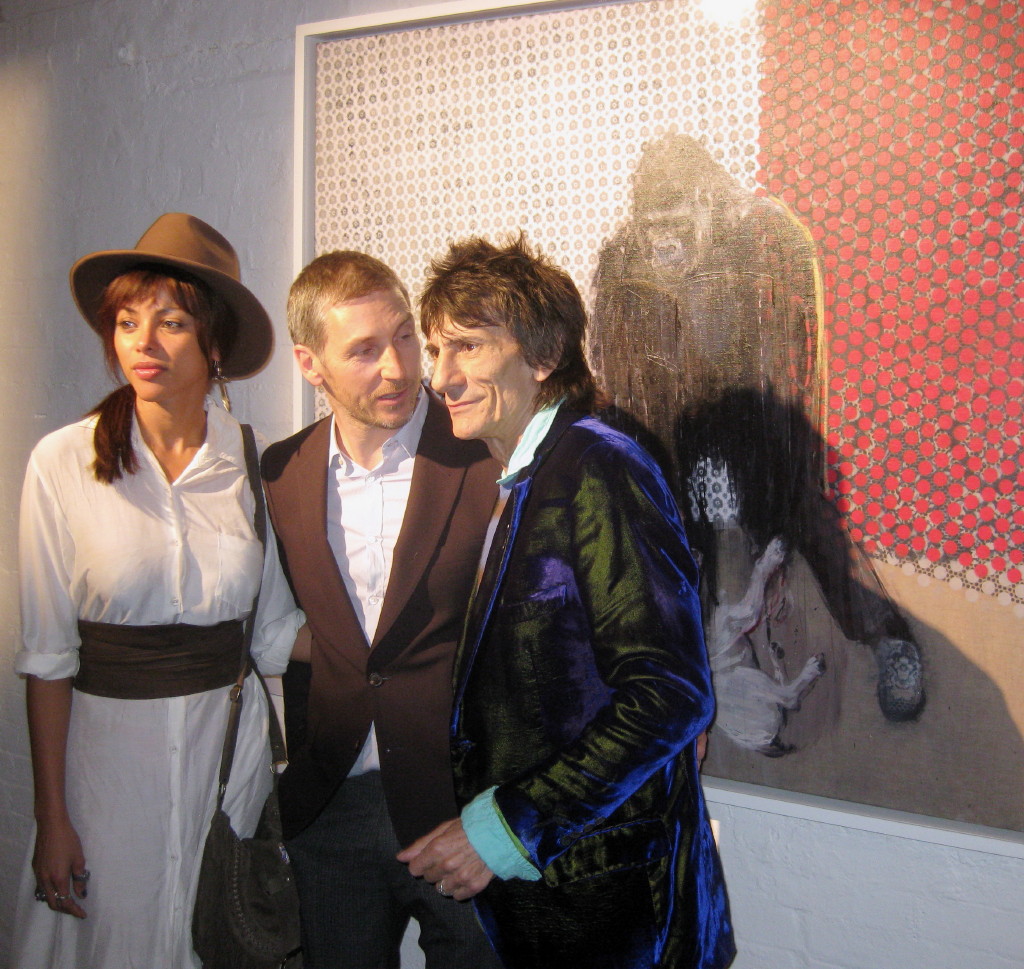 Every Thing Must Go (previewed), the new Charming Baker pop-up show in London’s Covent Garden opened on Thursday 7 July. It was a well-organised, confidently-run operation on the night. Guests were looked after by a tag-team of hosts including the artist himself, his manager Tim Fennell, Pat Magnarella and Roger Klein of Pat Magnarella Management, and the Jealous Gallery crew. Art may or may not be the new rock and roll, but both worlds mixed comfortably at the event which was attended by the likes of Ronnie Wood, Noel Gallagher, Antony Micallef, Conor Harrington and Chloe Early.

The exhibition at Mercer Street Studios (16 Mercer Street) continues until 31 July. See more commentary and photos after the jump. 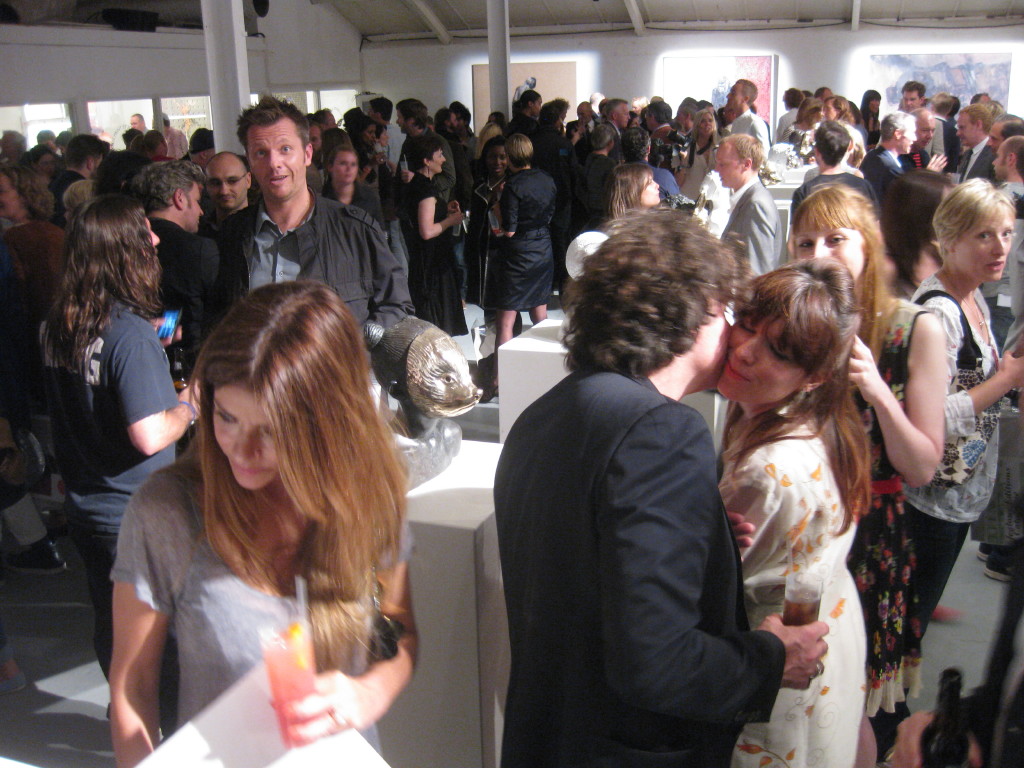 A blurred and newly-married Sara MacDonald in the foreground (left) 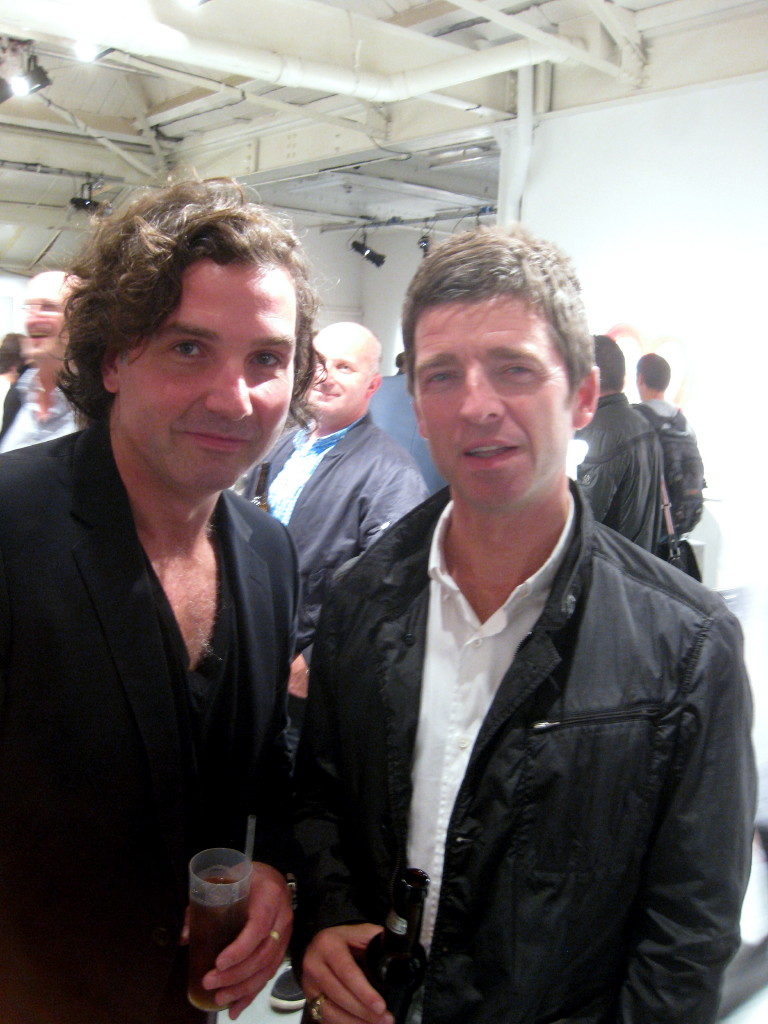 Antony Genn of the Hours, with Noel Gallagher 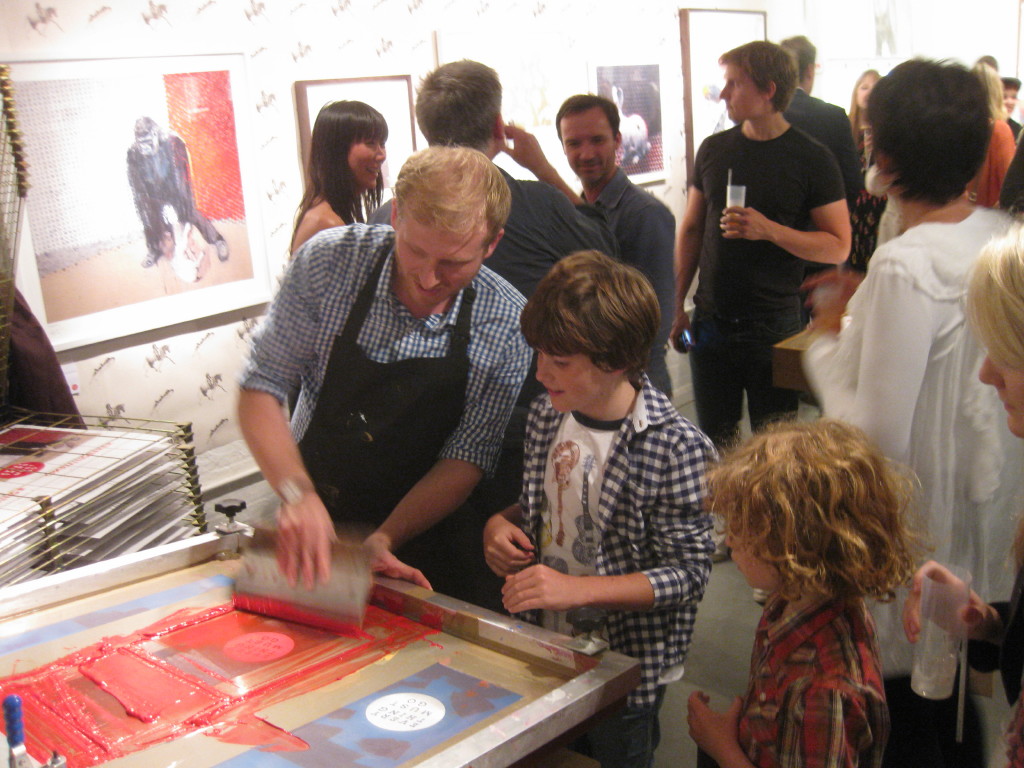 Screenprinting demonstrations in the prints area of the exhibition space 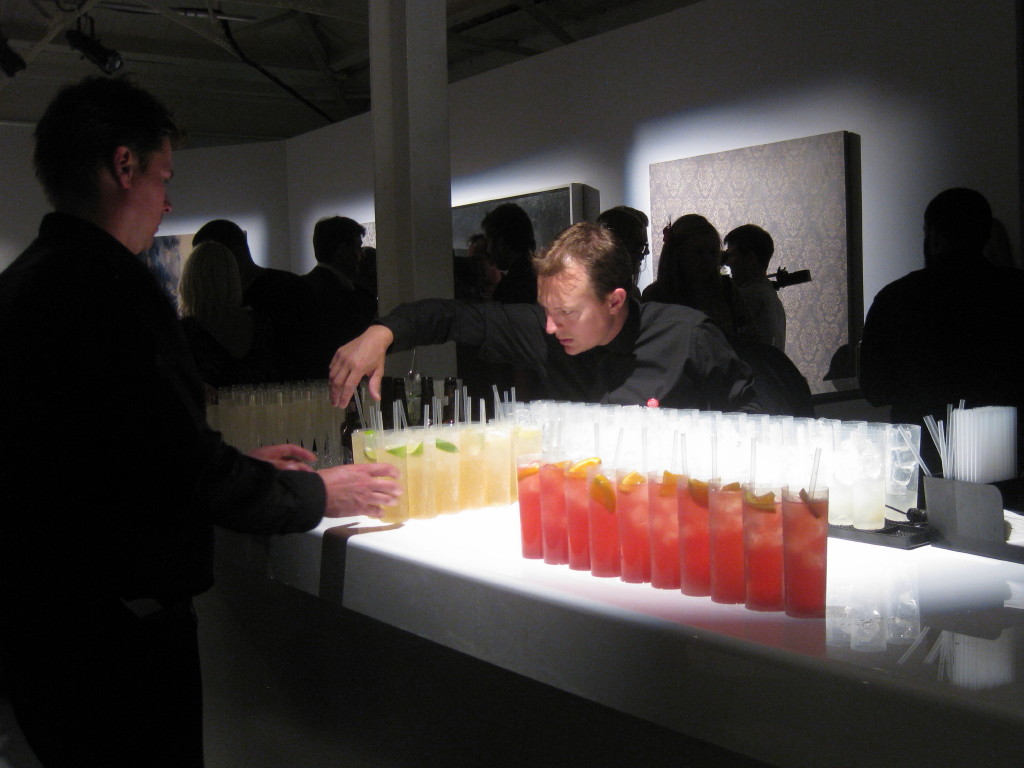 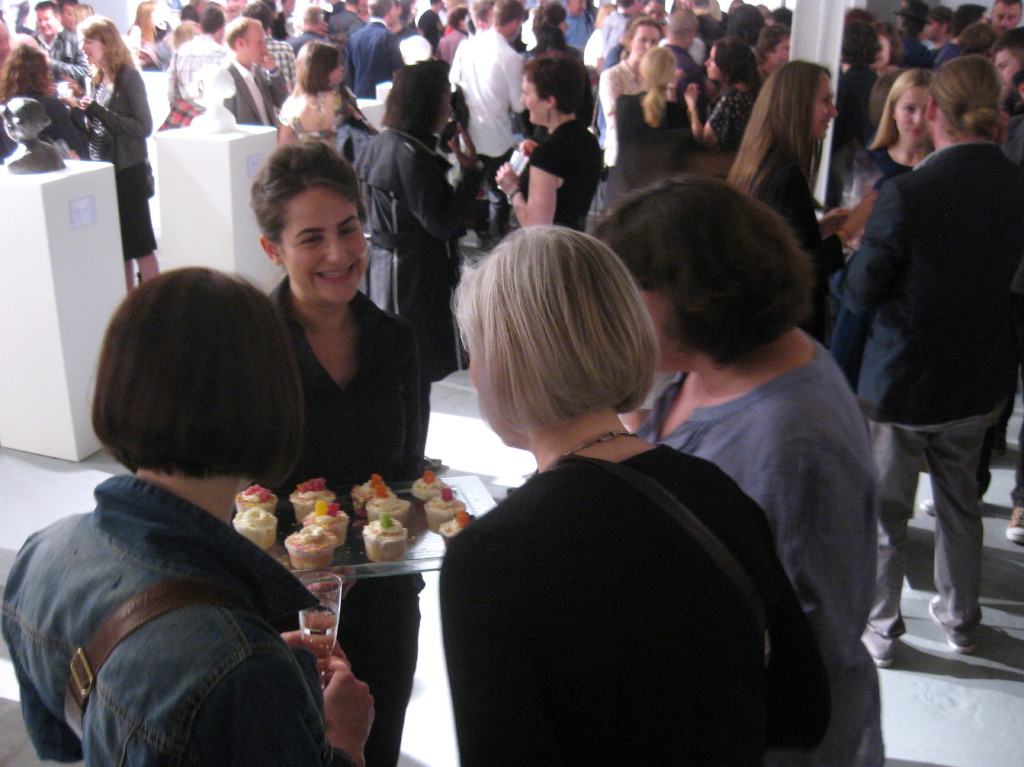 The free-flowing bar assisted greatly in securing a buzzy atmosphere. It remained open until just before 10 p.m. and was manned by staff who succeeded in churning out the cocktails and other beverages faster than guests could drink them. A sugar rush was also provided by the cupcakes on offer (the availability of baked goods seems to be turning into a recurring theme at Charming Baker exhibition openings). These, combined with the goody bags handed out, made the event almost feel like a birthday party at times. People helped themselves to signed posters, catalogues, a variety of postcards, stickers and pin badges — all of which could still be obtained when AM revisited the exhibition on Saturday afternoon. We felt the complimentary catalogues in particular were a pleasant surprise and generous touch.

Images of a number of the works at Every Thing Must Go were already featured in our preview article, and now we’ve got shots of a few other pieces on display, including those in glazed frames. Distracting reflections caused by the latter were for us the only thing that hindered an otherwise strongly presented show. Bearing in mind the prices his paintings now command, we would argue that a switch to museum glass (or another type of non-reflective glass) for greater strength of impact would be a worthwhile additional expense for Baker and his team to consider in the future. 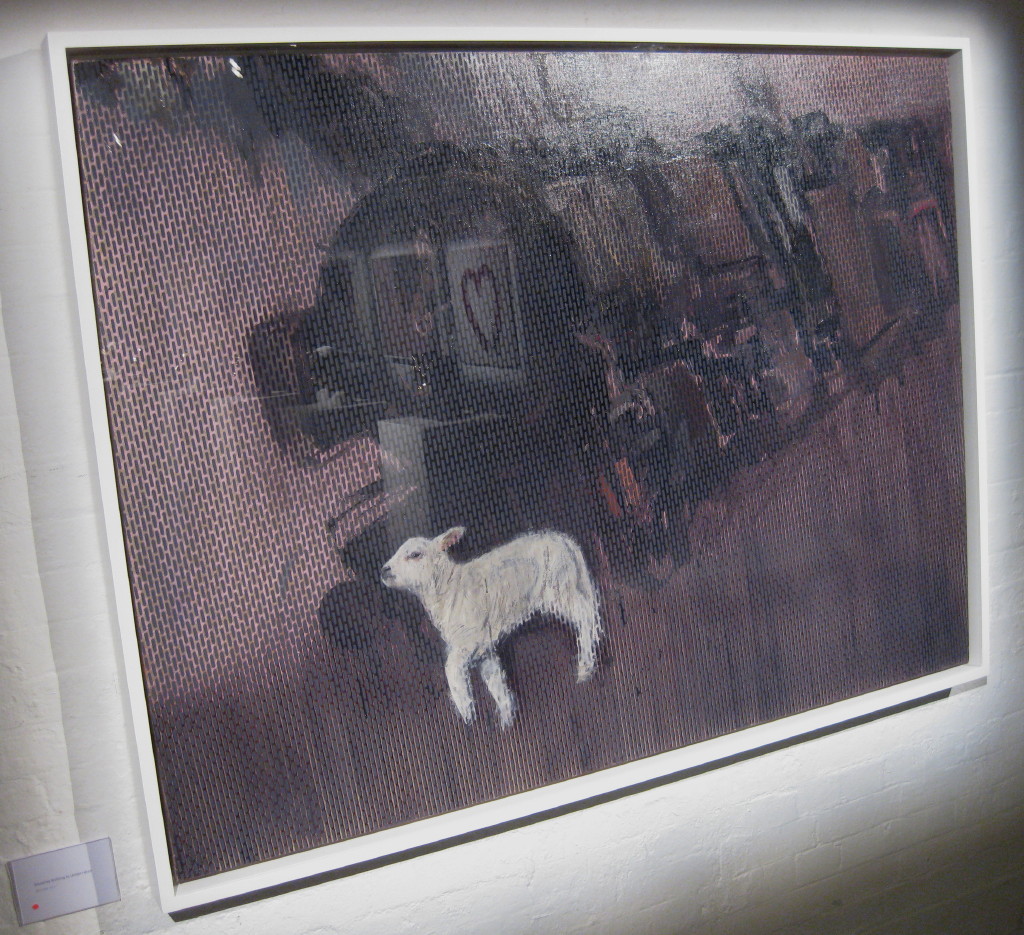 'Knowing Nothing Is Under-Rated'. Oil on linen 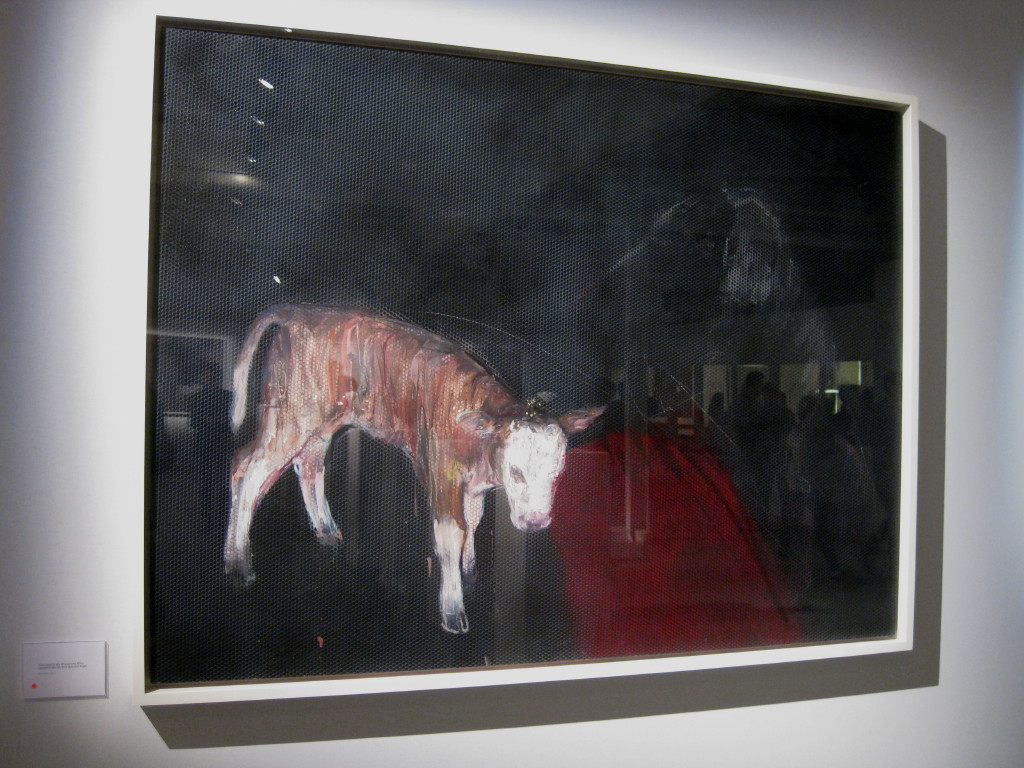 'The Lord Is My Shepherd Who Leadeth Me Up The Garden Path'. Oil on linen 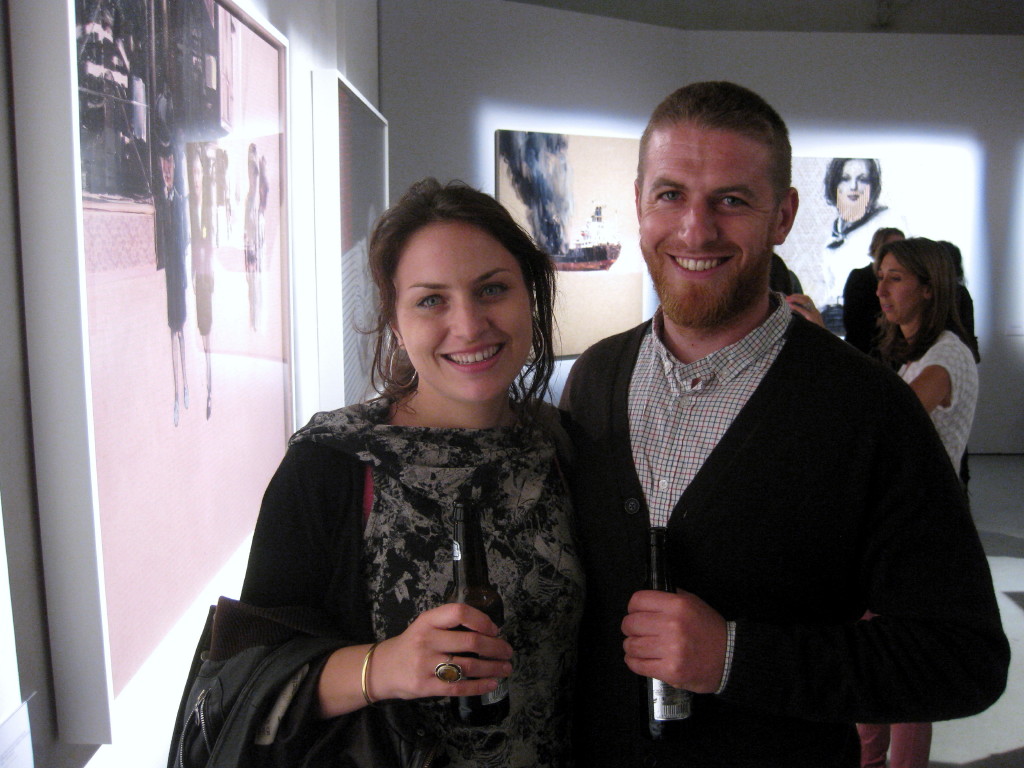 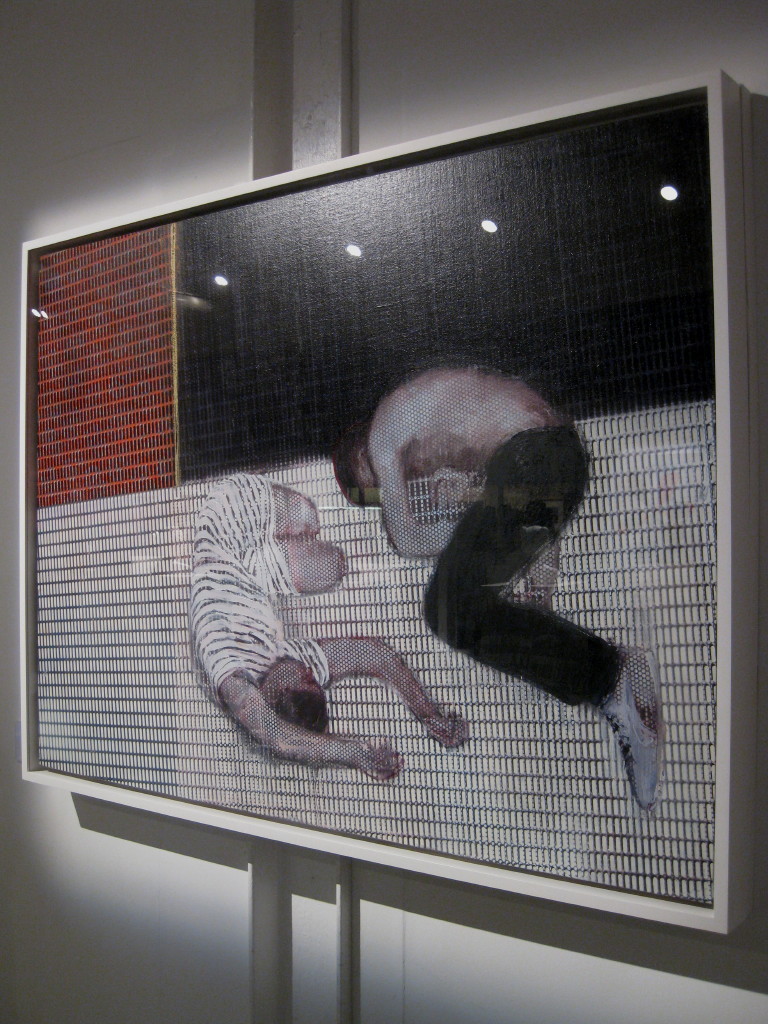 Time for a gift. If you like dogs but get annoyed when they follow you around all the time, we’ve got the solution. Charming Baker and Jealous Gallery kindly gave us the two-colour screenprint with metallic Lascaux pigment featured below, measuring approximately 38 cm x 53 cm. It’s signed, blind-stamped, printed on 310 gsm Somerset paper, and we in turn are giving it away. The print is untitled so the winner can name the dog as they please. We figure it looks like a Michael or maybe a David, regardless of whether it’s male or female. A catalogue will also be included as part of the prize.

Just leave a non-rude, dog-related comment (e.g. your favourite breed, a dog joke, or a little-known dog fact) on this post or on AM’s Facebook page. A winner will be chosen at random on Tuesday 19 July at 8 p.m. London time and contacted for their mailing address. One entry per household, please. Good luck to all. 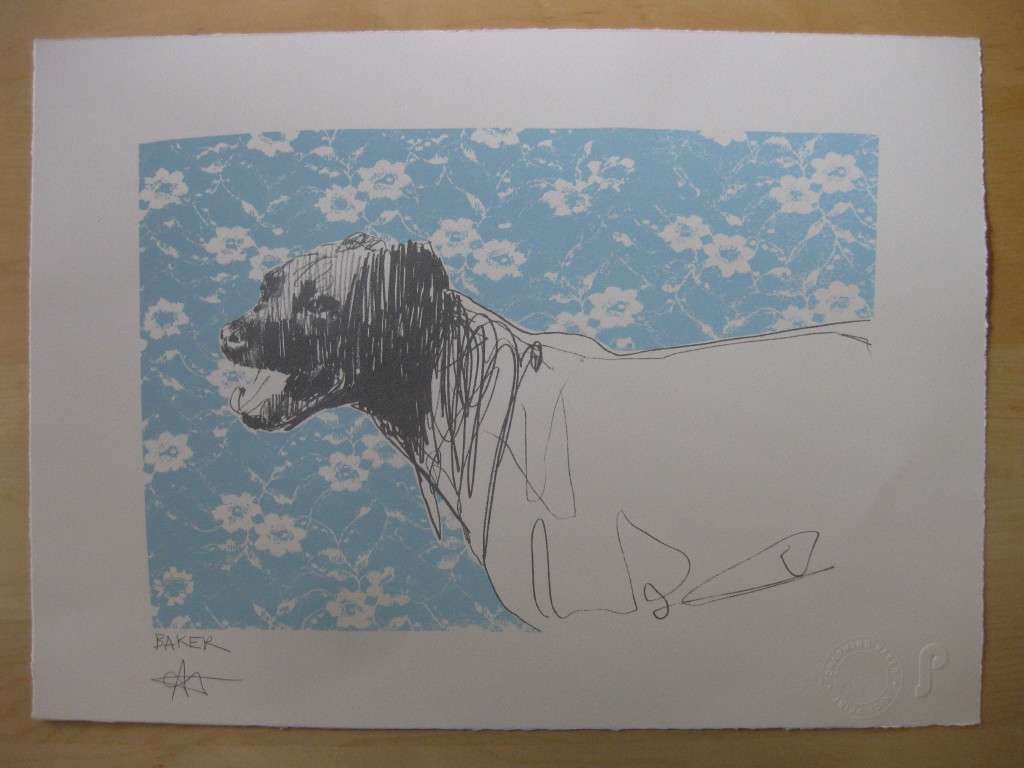 Caveat to the future winner: Be good. If this screenprint later pops up on eBay, AM will feel rather foolish. We’ll then get miffed and send the karma police after you. They’re in pocket — we already paid them off — and they’ll redress the balance for us. It won’t be a vengeance thing; we’d describe it more as an act of retribution based on principle. What’s a suitable penalty for exploiting the kind gesture of another? We’re not sure yet but the sudden loss of bladder control in a public space sounds about right.

A blurred and newly-married Sara MacDonald in the foreground (left)

Antony Genn of the Hours, with Noel Gallagher

Screenprinting demonstrations in the prints area of the exhibition space

The prints room, with Pat Magnarella in the background on the right

Flicking through the show catalogue

‘Knowing Nothing Is Under-Rated’. Oil on linen

‘Knowing Nothing Is Under-Rated’ (detail)

‘The Lord Is My Shepherd Who Leadeth Me Up The Garden Path’. Oil on linen

‘All I Want Is The Courage To Hide Behind My Own Sense of Self Belief’ (black). Paint and polished bronze. Edition of 9

‘All I Want Is To Remain Ignorant Of All The Good I’ll Never Do’ (black). Paint and polished bronze. Edition of 9

‘I Hope Life’s Not A Joke Because I Don’t Find It Funny’. Glory holes were never this elaborate back in the day. AM forgot to check to see if the painting was double-sided

‘Love Is Never Thinking It Might End Before We Do’. Oil and buckshot holes on linen. Painting on loan

‘Love Is Never Thinking It Might End Before We Do’ (detail)