Spanish “wall painter” Aryz (pronounced ar-eez), opened his 1st US solo show last Friday at Fifty24SF in San Francisco. The young artist is mostly known for the large scale murals he has been painting from Europe through the US to Central and South America. His recognizable soft colors, subtle lines, transparent & “jelly” feeling character and objects, have enhanced many abandoned factories & big walls and has gained him a lot of popularity & respect among urban and street art fans.

Titled Style is The Limit, the show was carefully set up and prepared by the artist himself for a week ahead of the show. There were pieces of a destroyed brick wall that he did a quick graffiti piece on in the gallery windows, neon lights spelling the title of the show, and the entire space of the gallery was painted with his signature colors and lines in order to give visitors the full experience and to make the space more comfortable and enjoyable for everyone. For an artist that has such a recognizable and unique style of painting, the title of the show symbolizes a reminder about the boundaries and limitations that each artist hase due to his/her techniques or mediums. Such limitations have significant influence on how the work will be perceived and enjoyed by the viewer. Also, knowing the importance of the term “style” in the graffiti world, the title might be a reference to his graffiti background to which he is strongly connected, even though he is mostly using brush and acrylic paint these days.

After having only 2 shows in Europe, first at Montana store and gallery in Barcelona, than in Lisbon this was Aryz first solo show in US. Focused mostly on his process work (similar to his previous show in Lisbon in Dec 2011), the centerpiece of the show were 20 studies on paper, done with mixed media including gouache, spray paint, acrylic and ink. These studies show the way he is developing his work, building images sometimes with just lines (sometimes with just color) in order to get his recognizable style. Sometimes portraying people, sometimes man made machines such as cars or trains, or simply studying human body through numerous skeleton and skull drawings, the Aryz is approaching his images and elements from different angles and perspectives, giving the viewer a clear look inside his process.

The other part of the new body of work were two big canvas/panel pieces, Basket (acrylic and spray paint on canvas, 77” x 43”), and Overdose (acrylic and spray paint on wood panel, 84.5” x 66.5”), much more similar to what he was showing in Barcelona back in 2011. Being a much closer representation of his infamous wall painting style, these two pieces were probably the strongest part of the show, with the softness, composition, and color palette of Basket being crowd’s favorite.

Finally, the show piece of this event was the big wooden sculpture that the artist revealed in San Francisco. Since the title of the show is focused on limitations and boundaries that technique has on an artist’s work, this step into the 3D world might be Aryz way of pushing his limits and creativity. Painstakingly carved from solid pieces of linden wood that were joined together, the piece was smoothly surfaced without varnish or paint, leaving the wood soft feel and grain texture. It’s hard to tell that this dog-like character is Aryz first work with this medium. With big, almost cartoonish eyes, with a silly looking facial expression, the statue is clearly a 3D representation of the signature animal characters he’s been doing on the big walls around the globe. And even though he usually doesn’t like sending messages with his work, the posture of the El lobo de Gubbio, with his hands in a praying posture makes the viewer wonder if there is some sort of a hidden message behind this piece?

The fact that opening night of such young artist attracted names such as Pusshead, Jesse Hernandez, or Tristan Eaton, plus a constant queue of art loving fans in front of Fifty24SF, says a lot about the respect and reputation Aryz gained in the art world in the last couple of years that he has been actively painting walls worldwide. There was a word about print release for this show, so stay tuned to AM for more info on that. 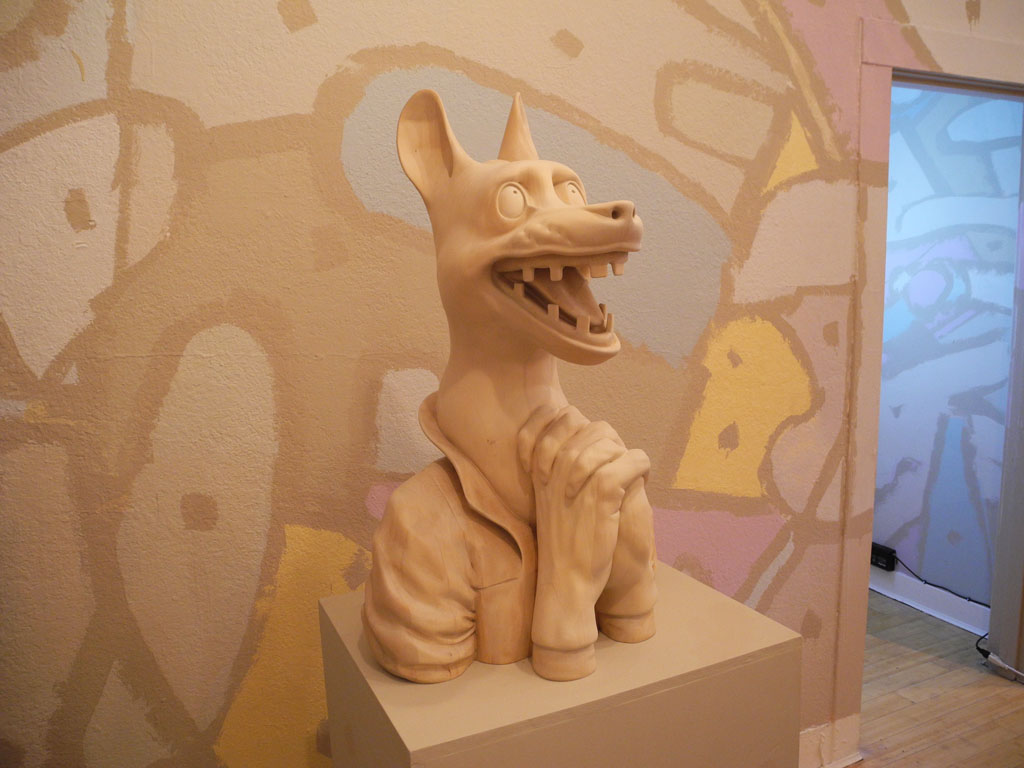 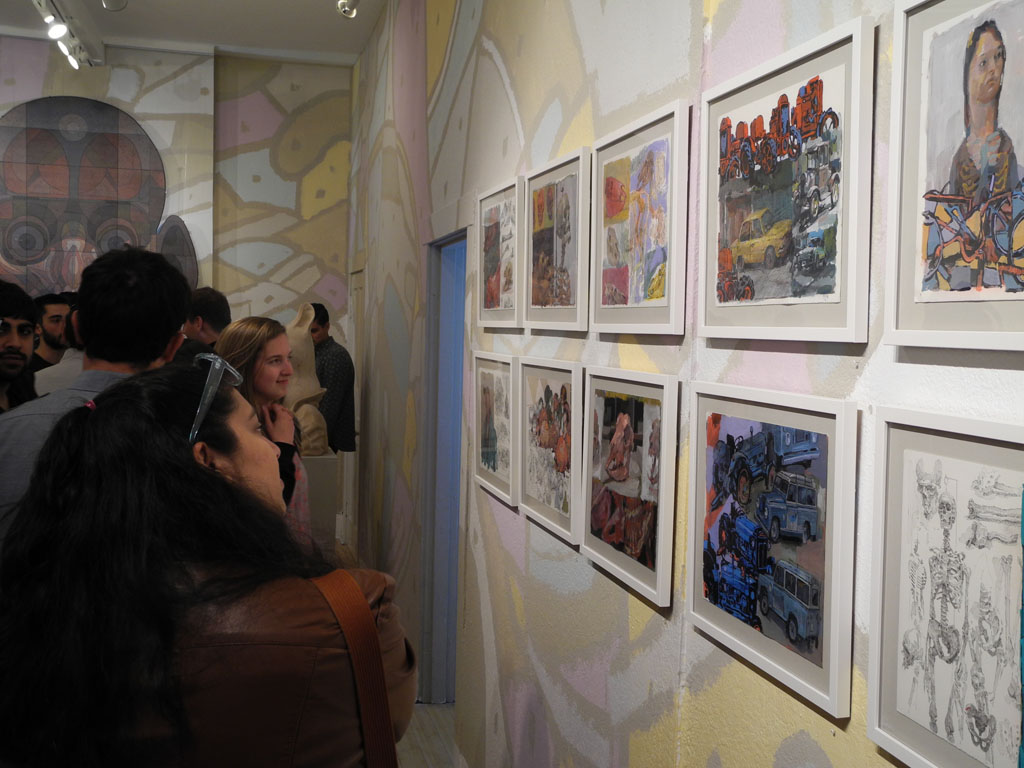 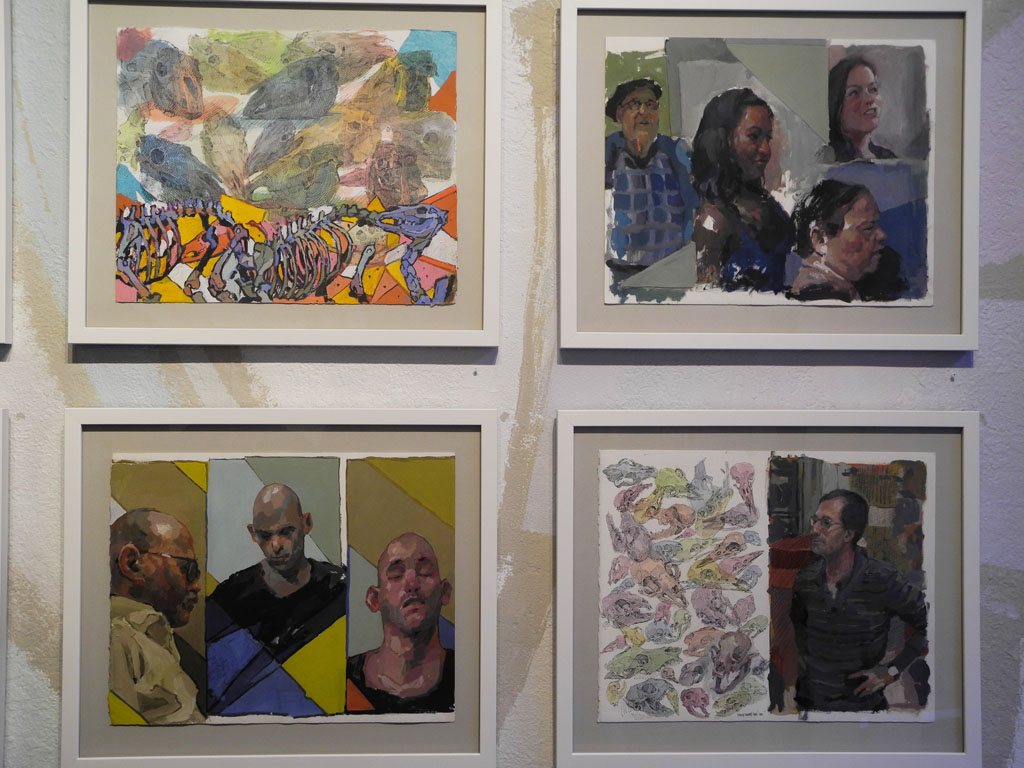 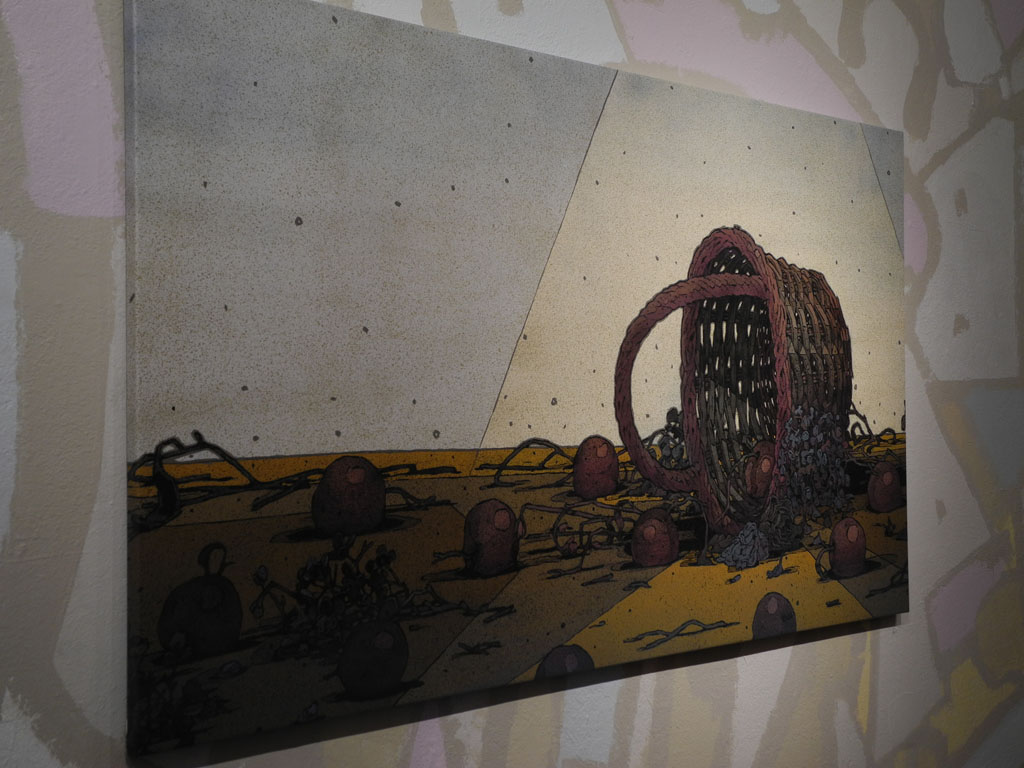 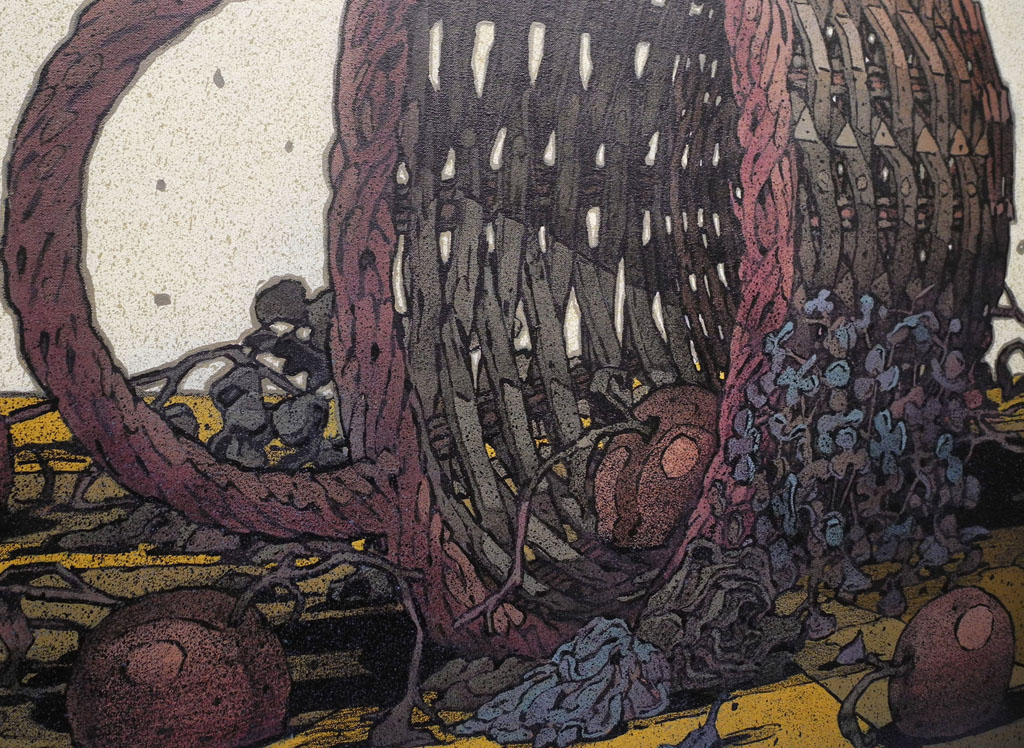 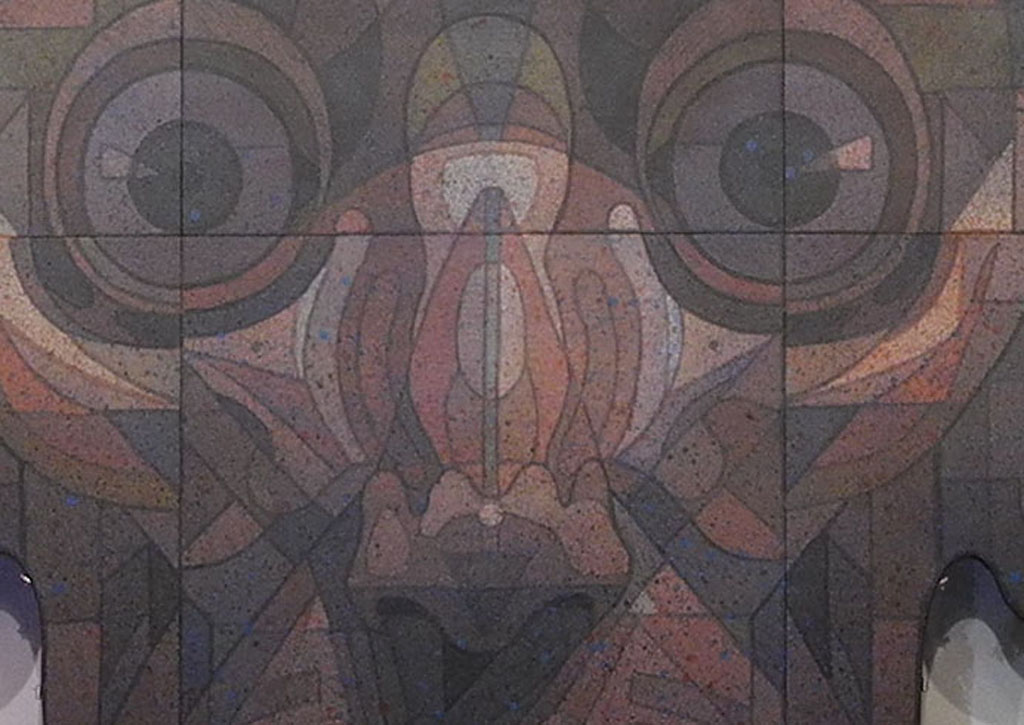 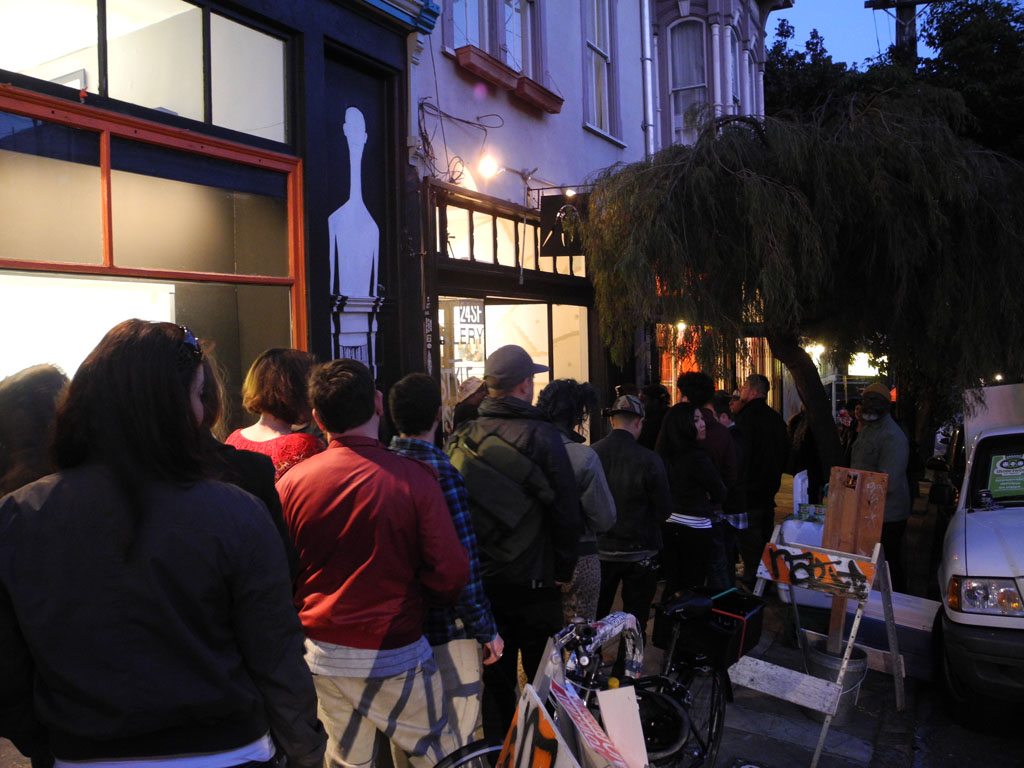 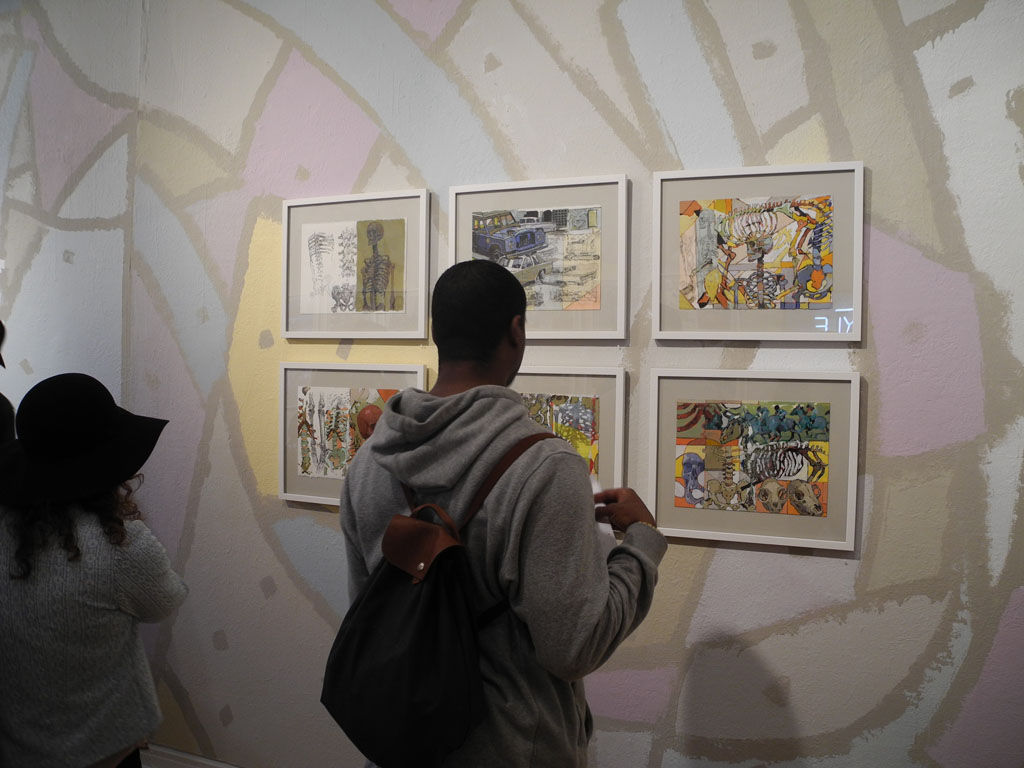