Invader (featured) returned to Los Angeles recently to open his new exhibition entitled Into The White Cube (previewed) at Over The Influence.

In The Myth of Sisyphus, Albert Camus declared that “great works are often born on a street-corner.” In a literal sense, this is perhaps never more true than with the French artist, who has often favored these locations for the work he has created in nearly 80 cities around the world. The 10th wave of the Invasion of Los Angeles has just been completed and 14 new works now also grace the city’s streets. Notable examples, both of which are located at intersections, include LA_202, with its 8-bit avocado, and the vanitas-themed LA_203. Camus goes on to argue that from these great works and thoughts comes a personal realization of the absurdity of life in the face of inevitable, eventual death; in light of this knowledge, it is contended that the only choice we are left with is between a sepulchral oblivion and a head-long pursuit of revolt, freedom and passion. Throughout his 20 year career, Invader has always wholeheartedly chosen to embrace this latter trio of values and what has most recently developed from these street works is his new show in The City of Angels.

Upon entering the gallery space, visitors are greeted by a prodigious collection of 54 ‘Aliases’, each providing an exact facsimile of its corresponding street piece. These include works from the majority of the previous nine waves of the Invasion of L.A. but the assemblage also reflects the rich diversity of the global invasion to date: TK_110 is a classic Invader which lives in the ebullient heart of Tokyo’s Shinjuku neighborhood, PA_1324 features a cornucopia of produce originally created for Paris’ Veggietown and RBA_04 depicts a Moroccan rug which sits above one of Rabat’s bustling souks. Furthermore, two works in particular reflect the duality of the anonymous artist’s work, which is at the heart of the exhibition. The gilt-framed MLGA_19 references a traditional landscape painting and points towards Invader as a studio artist; conversely, TK_92 shows a fire extinguisher, the weapon of choice for graffiti artists painting super-sized tags. In a later room, this symbiosis is explored further in a series of works which overlay the Paris-based artist’s handstyle on pages from a contemporary art auction catalog. Appropriately for a show being held just down the road from Tinsel Town, there is also an integrated cinema showing Art4Space and a number of short films including Rubikcubism. Perhaps the most compelling offering in the opening room is LA_186 which portrays The Dude from The Big Lebowski. Jeff Bridges’ character is arguably the most authentic cinematic depiction of Camus’ absurdist hero; a man who lives for today and does so very much on his own terms. Like Invader, El Duderino has embraced his personal passions and enriches the world through his existential rebellion. Unusually, LA_186 has been hung at floor level so that visitors can interact with The Dude and the piece really ties the room together.

The exhibition also marks the first public presentation of the Invader’s paintings, which have been executed with the razor-sharp edges, perfect right-angles and consistent plains of color which would perhaps be expected from an artist who is so exacting in other mediums. A number of works utilize emoji visuals and allude to their place as an increasingly ubiquitous visual language, which today is able to cut across economic and cultural divides in much the same way that video games were able to do in the late ’70s and early ’80s. Two canvases adopt the iconography of the LA_202 and LA_203 street pieces referred to above; the latter of these depicts multiple skulls and, in doing so, is clearly utilizing the tools of Dutch vanitas. The movement was concerned with the subject of our own mortality and the presence of a recently snuffed out candle was used as an allegorical device to symbolize the extinguishment of a human soul. When faced with the absurdity of the world, Camus railed against choosing the option of a nihilistic death. Interestingly, and in contrast to the traditional vanitas convention, the candle in Invader’s painting is undiminished and still burns bright; a proposition which would surely be met with approval by Albert Camus. 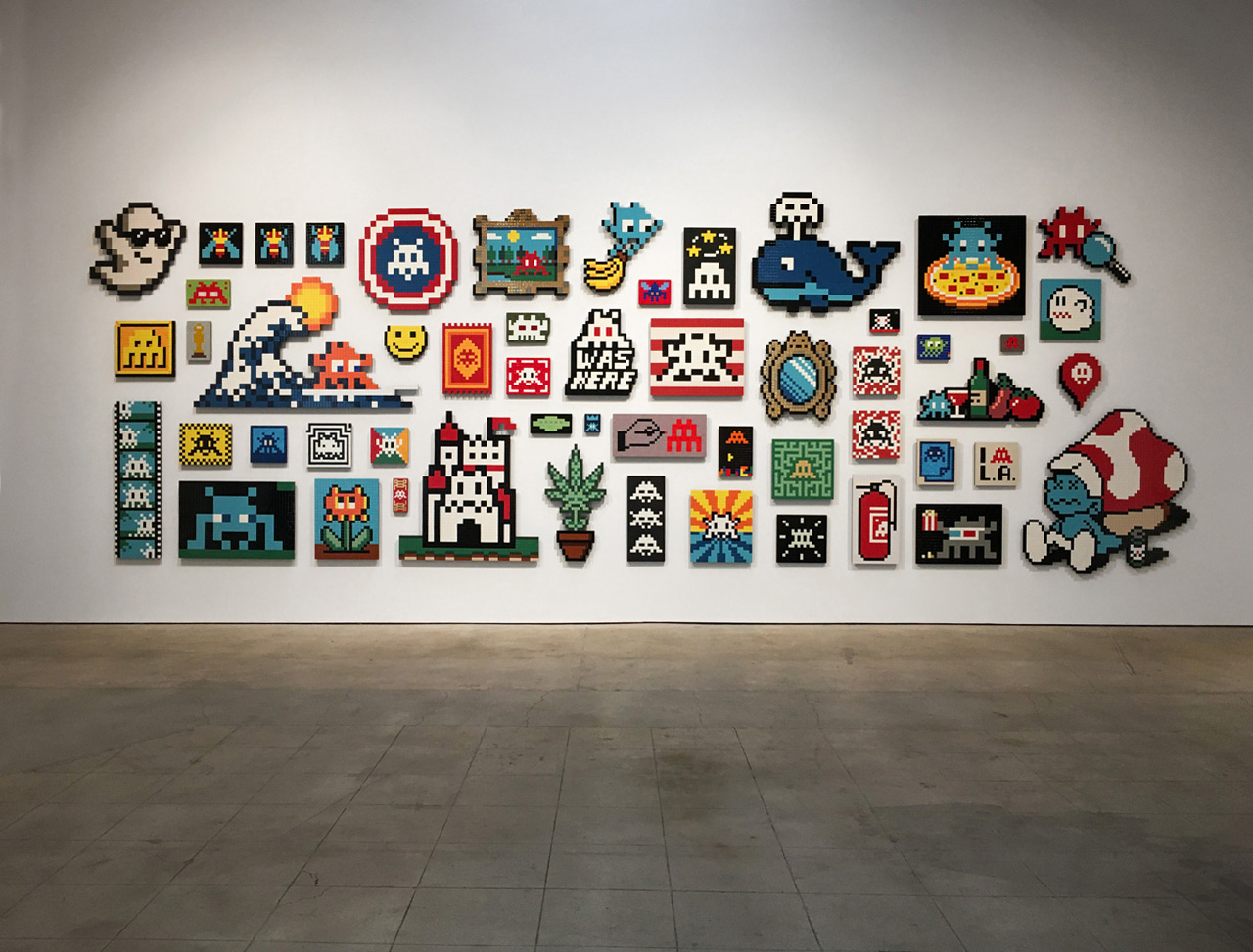 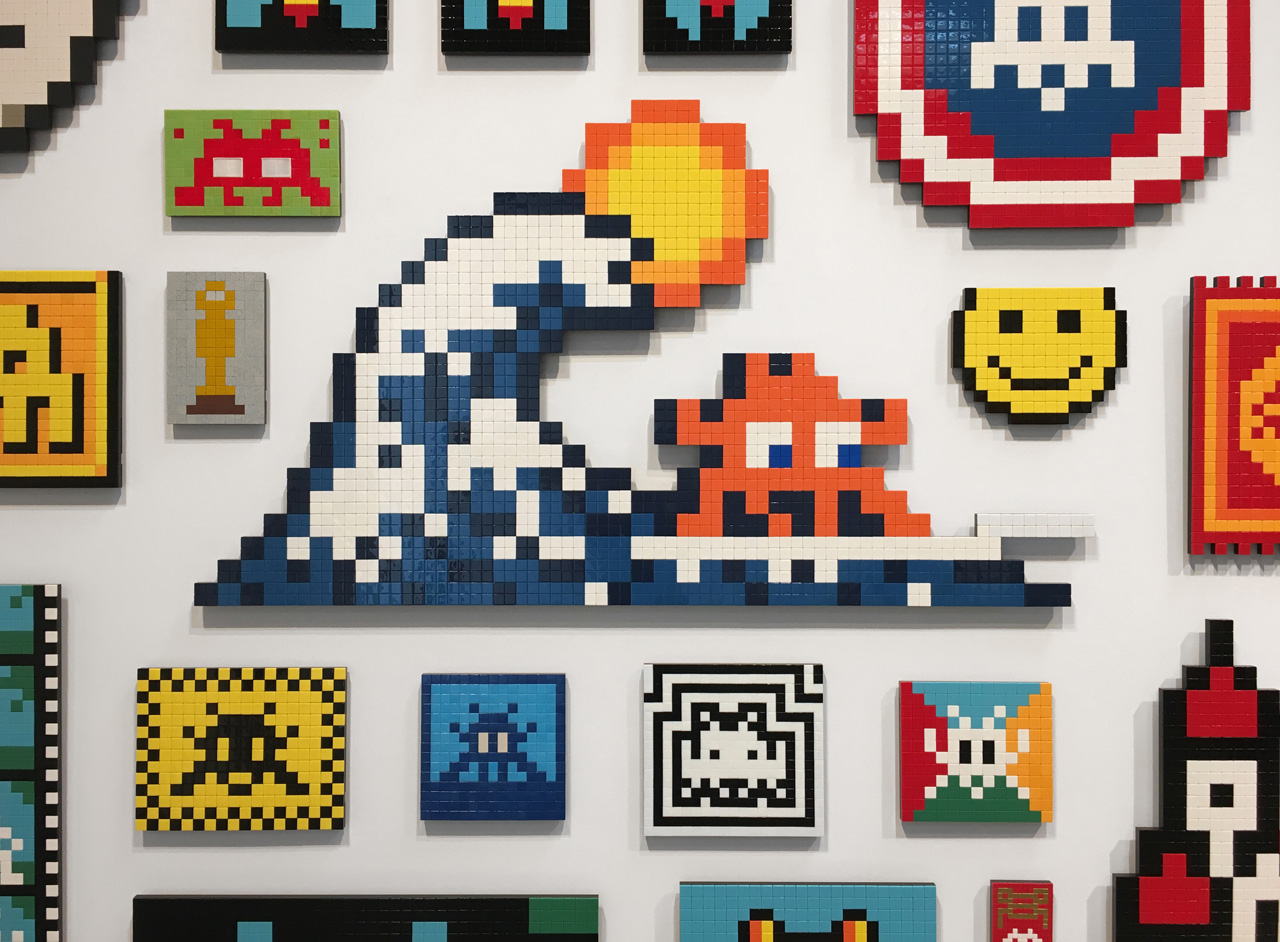 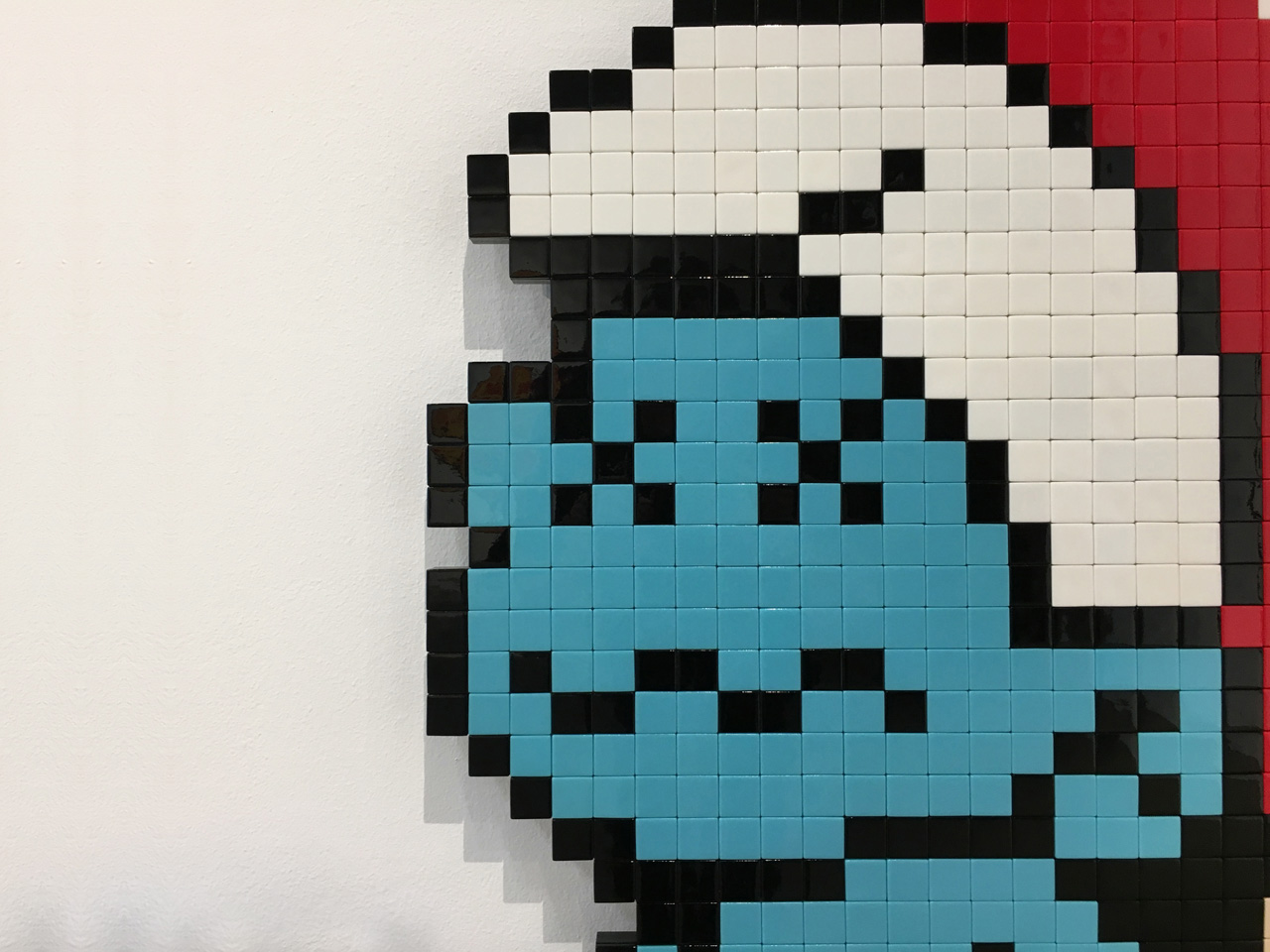 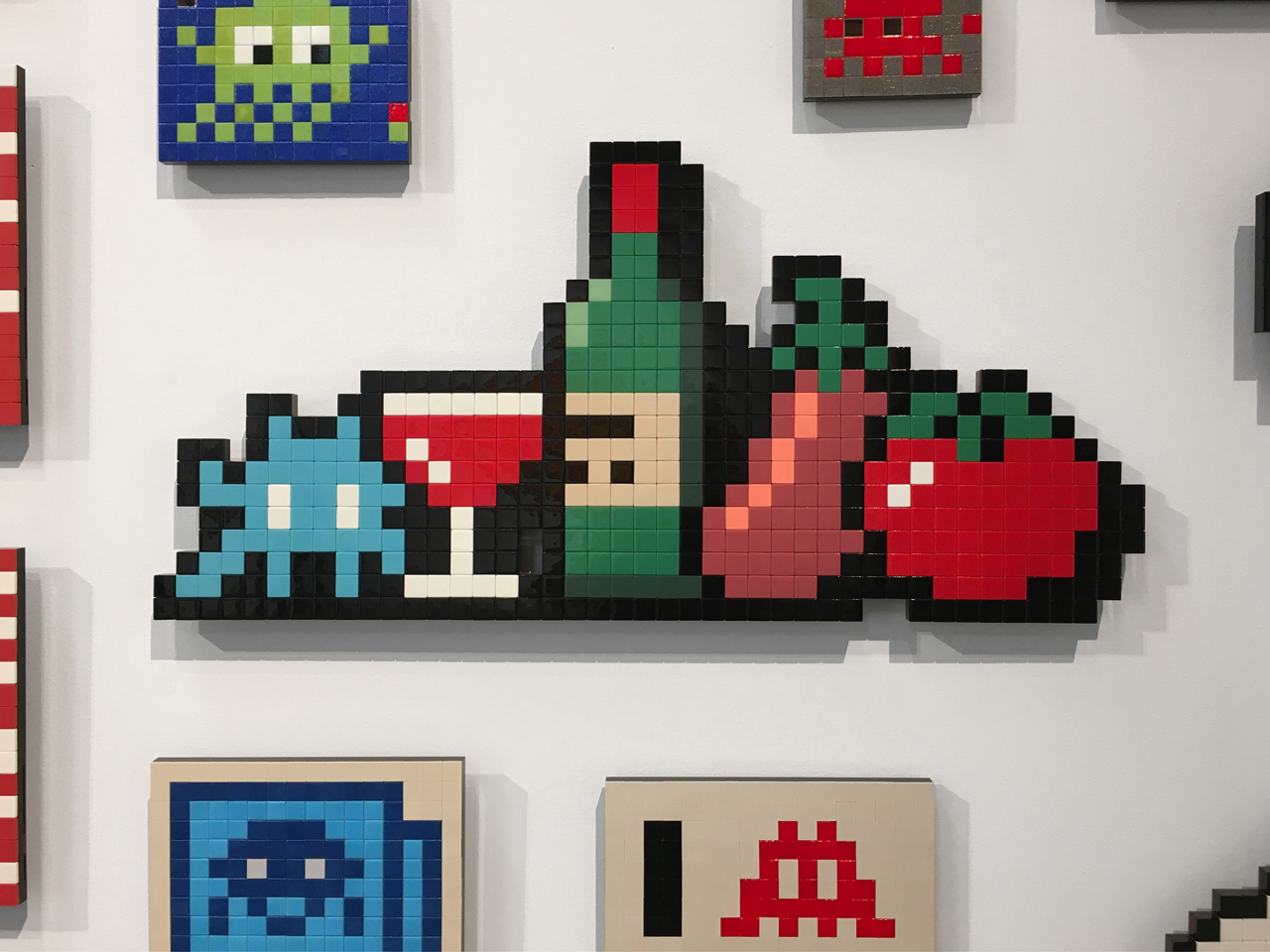 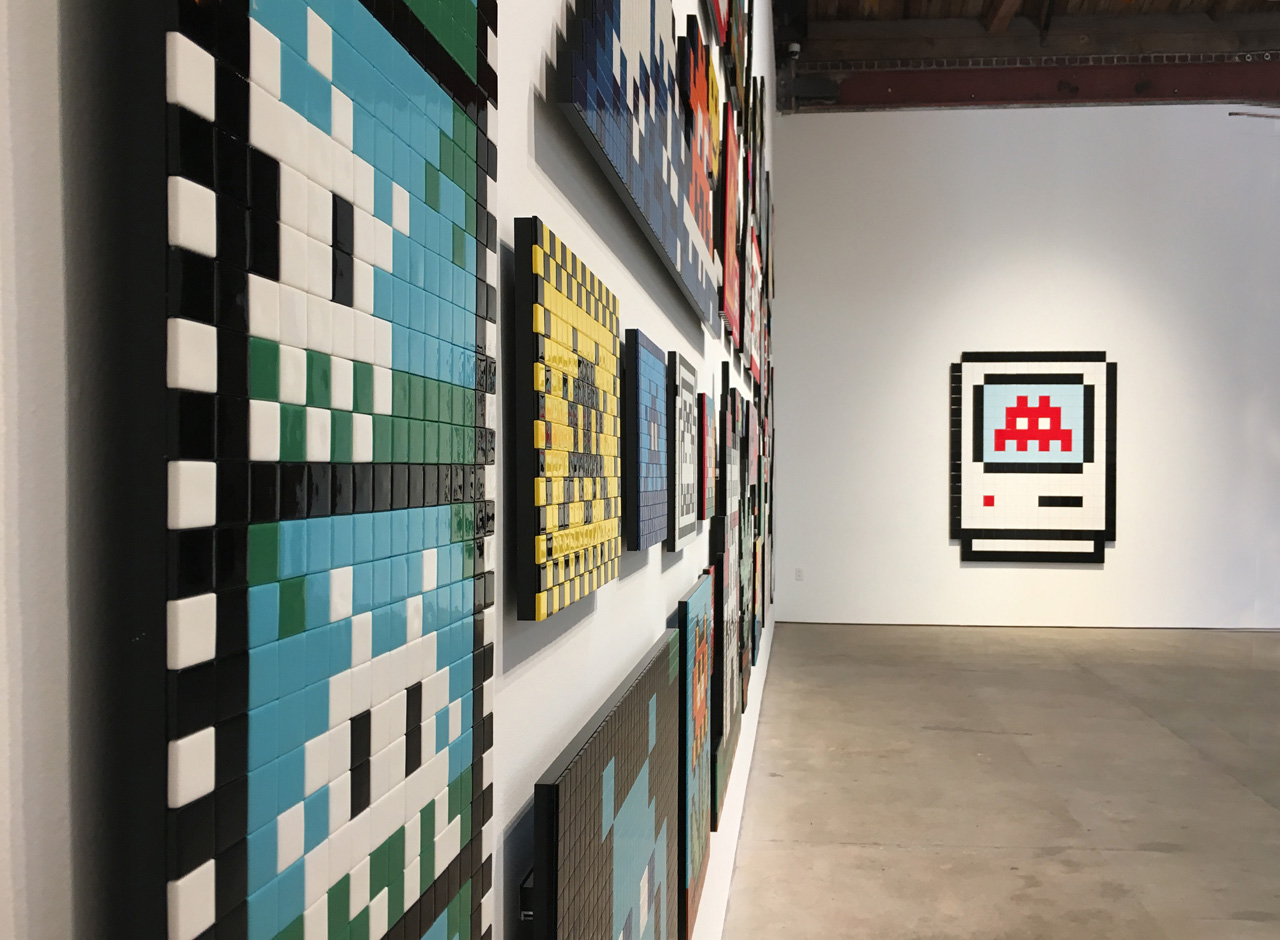 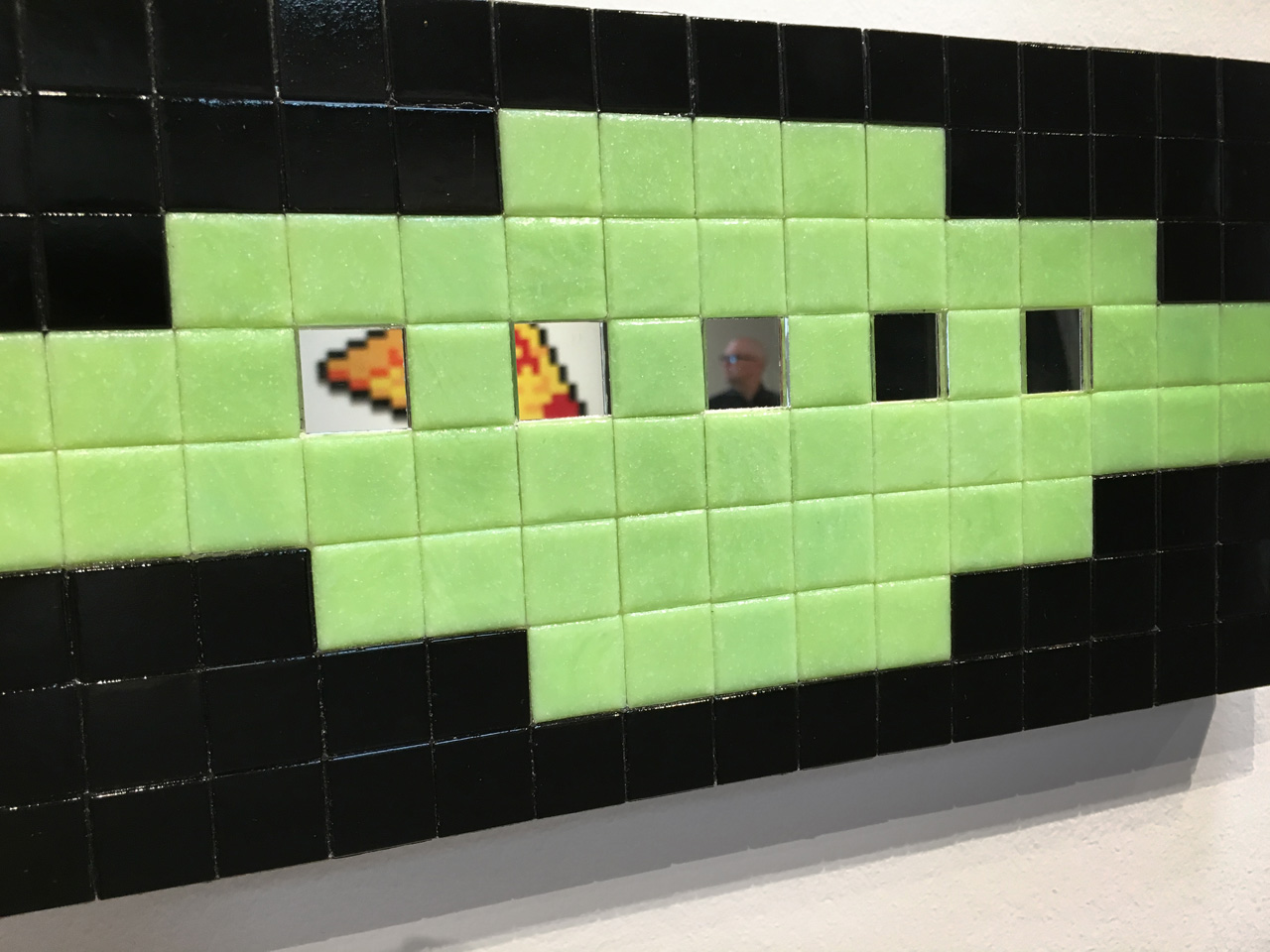 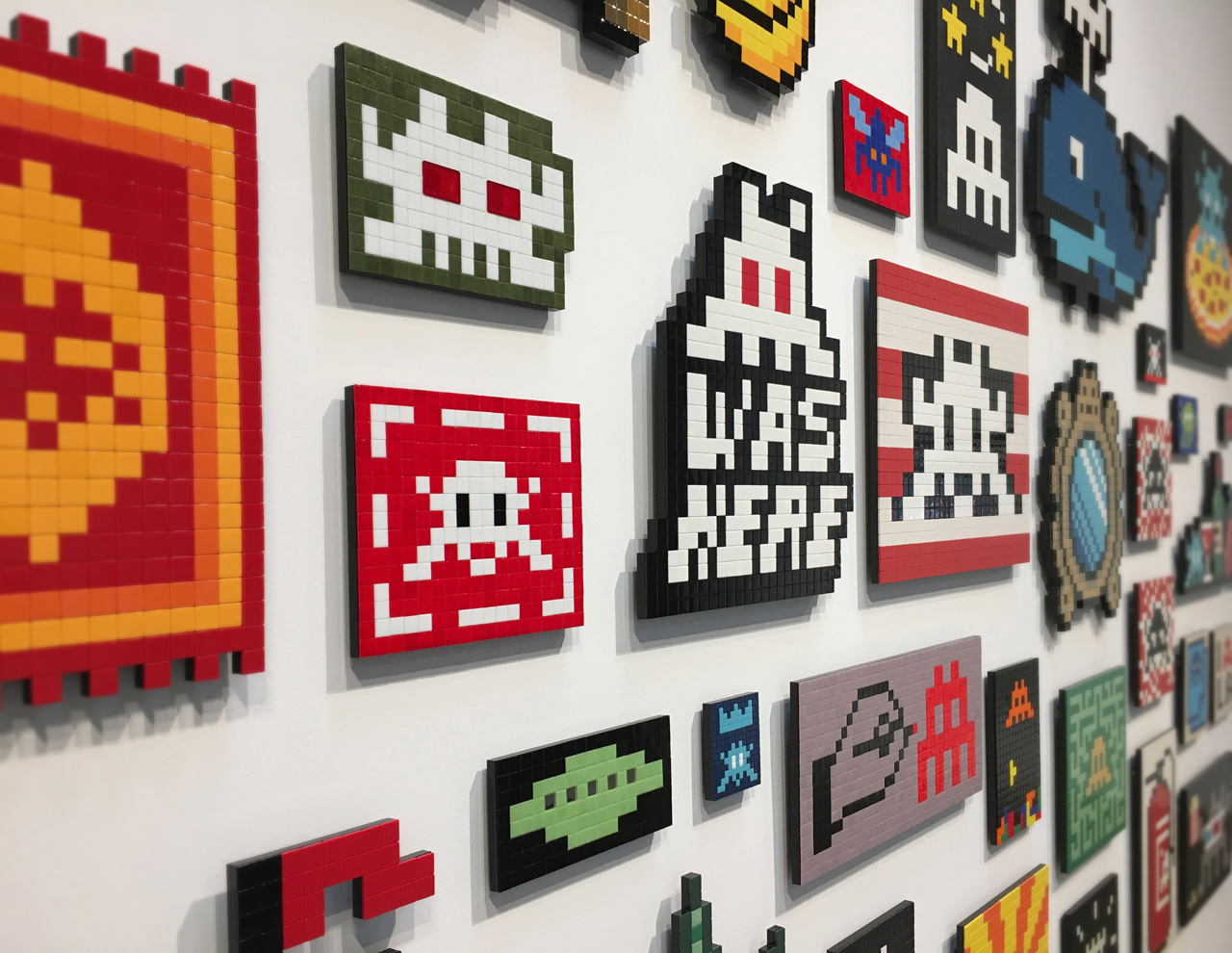