The Scottish National Gallery in Edinburgh is currently staging a comprehensive survey of the work of Bridget Riley which gives Scottish viewers the first opportunity to experience the artist’s work at its intended grand scale.

The exhibition opens with the London painter’s copy of George Seurat’s Le Pont de Courbevoie and her own post-impressionistic paintings of the Lincolnshire landscape. While this painterly aesthetic appears antithetical to the hard-edged Op art work for which she is known, this provided a springboard and conceptual framework for exploring the architecture of the natural world. Whilst highly abstract, Riley’s work continued to retain the structure of the world and, in this sense, it is both classical and contemporary. At its core, the work both depicts the artist’s visual experience and also gives the viewer their own immersive encounter where lines and shapes appearing to buzz and flicker. The paintings attempt to trigger emotions and states of being by playing on the optic nerve and creating a sensory response so that the viewer can feel and experience what Riley herself could see. The exhibition includes Blaze, which in many ways represents the culmination of her early black and white works, which served as a deliberate aggressive assault on the senses.

Riley spent her childhood summers by the Cornish coast and by the mid-1960s physicists had come to understand the universe through waves of energy. So it’s perhaps no surprise that she introduced waves into her practice with works such as the suitably lyrical Aubade, which hangs in the central room of the exhibition. These canvases realize and represent the energy which is present in all forms; their size allows them to engulf the viewer and the use of abstraction strips out a sense of scale, so that the painting could be conveying either singular waves of energy or a massive solar flare. Many early wave paintings such as Current also explored phenomena that disrupt and interfere with the status quo by representing the relationship between the standard and amended elements of the painting. But these in turn gave way to canvases such as Late Morning which give the impression of the ubiquity and complete presence of energy in the world, where it flows undisturbed by physical objects.

The expansion beyond a highly restricted color palette in the late 1980s and 1990s represented a watershed between Riley’s attempts to synthesize sensation with her own constructed forms and her intention to instead take sensation itself as the guiding principle. The introduction of diagonal lines in works such as Sky High and From Here also deliberately disrupt and subvert the equilibrium of the vertical lines and this reflects the essentially unstable nature of what sparks human sensation. Although these works are less confrontational than her earlier binary paintings, they are just as forthright and instead seek to disarm and draw the viewer into the experience. Close By emulates the characteristics of an ecosystem; singular colors interact with and modify how their neighboring hues are perceived, which reflects the active and unstable relationship between different elements in the world. Like Jackson Pollock, Riley regards the unity of nature to be so vast that it can’t be effectively, directly represented in a figurative snapshot of a vista and the collected works on display in this retrospective instead depict the very structure and essence of nature.

The exhibition also includes a range of works which are likely to be less familiar to viewers. The logarithmic spiral of Continuum is to date still her only foray into sculpture and her Rajasthan wall painting can otherwise only be viewed at the Staatsgalerie Stuttgart. Additionally, a room of preparatory sketches reveal her experiments which are necessary to achieve the kinetic quality of the works and a basement room displays some early pre-abstract works from her time as a student at Goldsmiths College and later at the Royal College of Art. 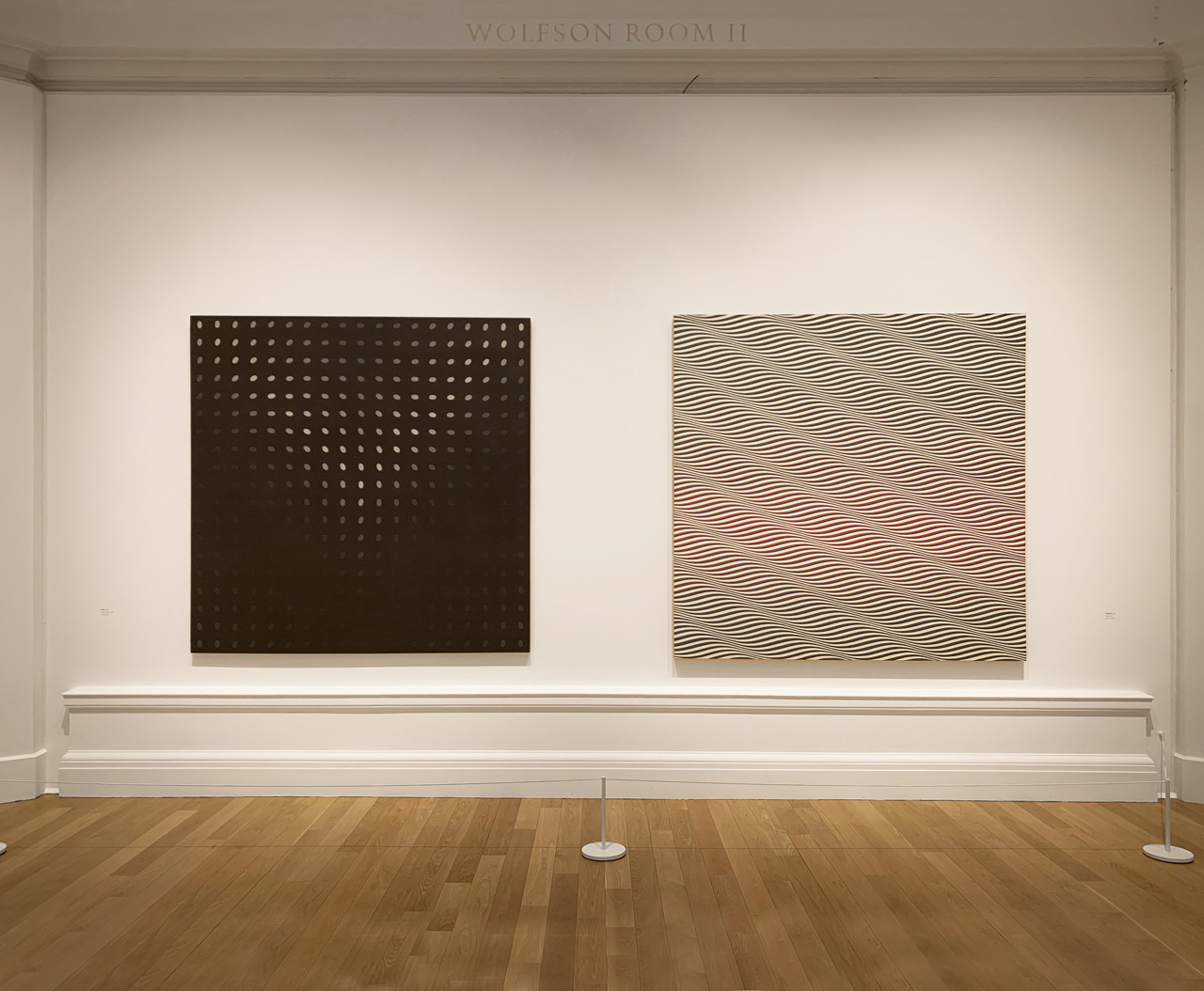 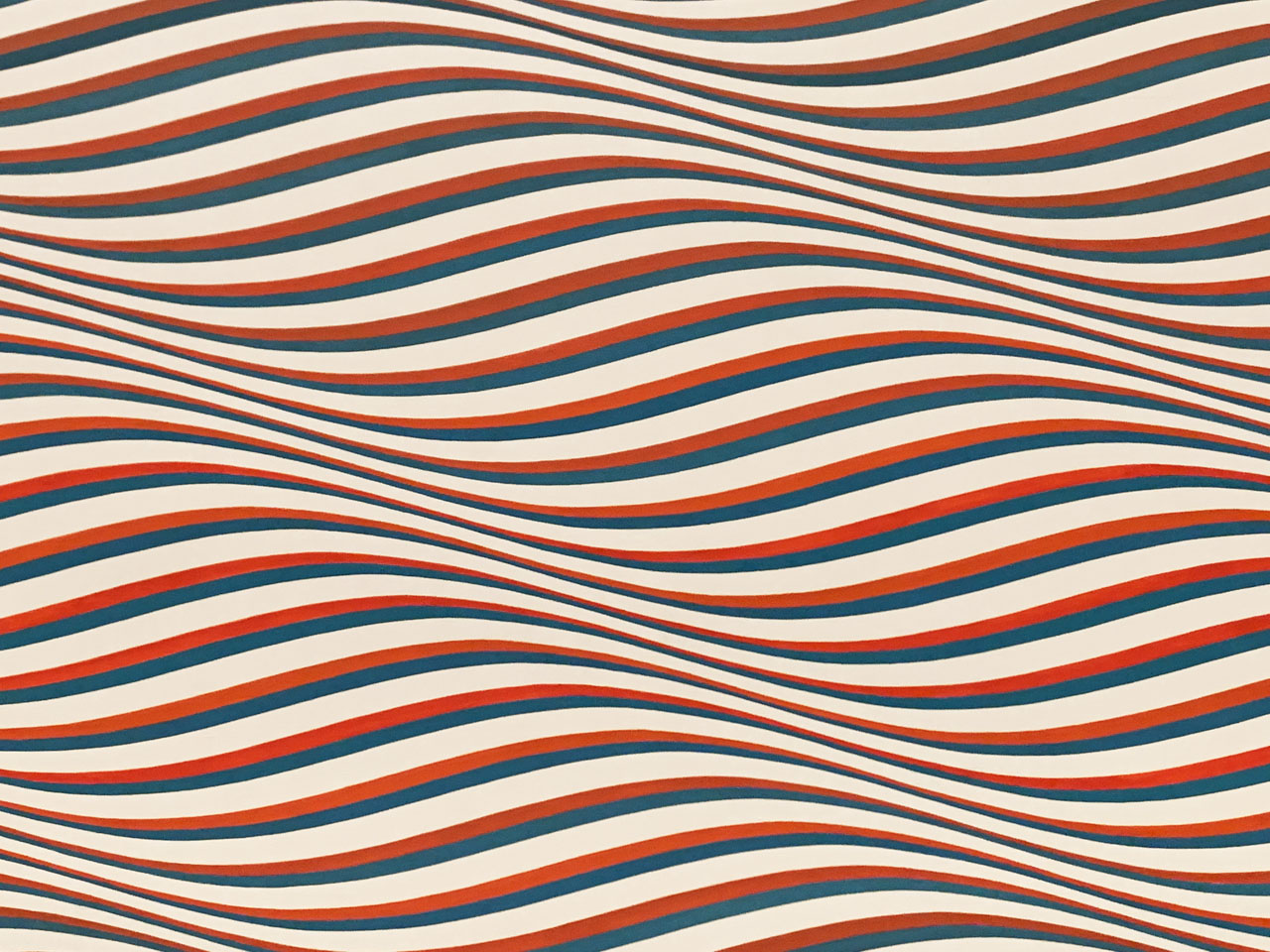 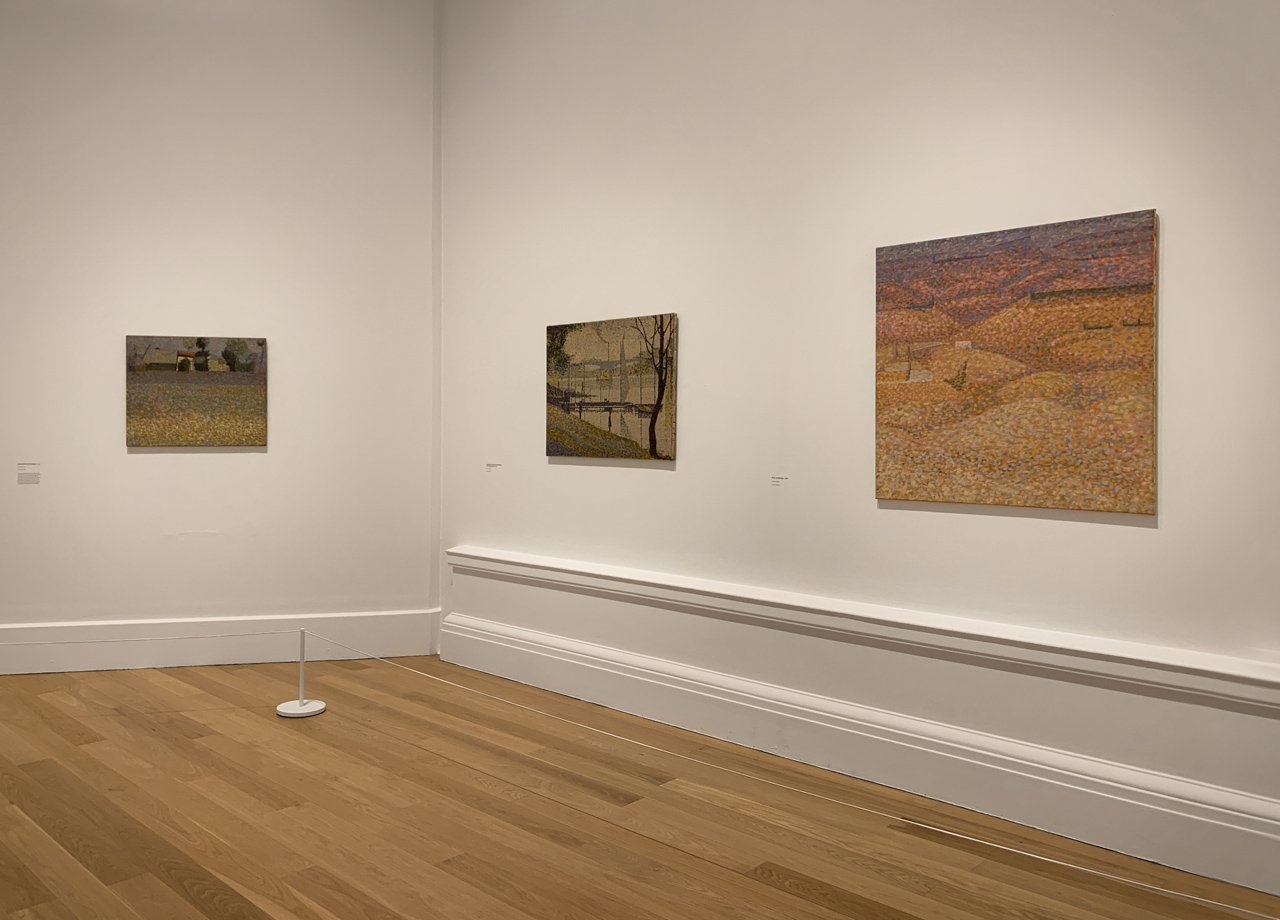 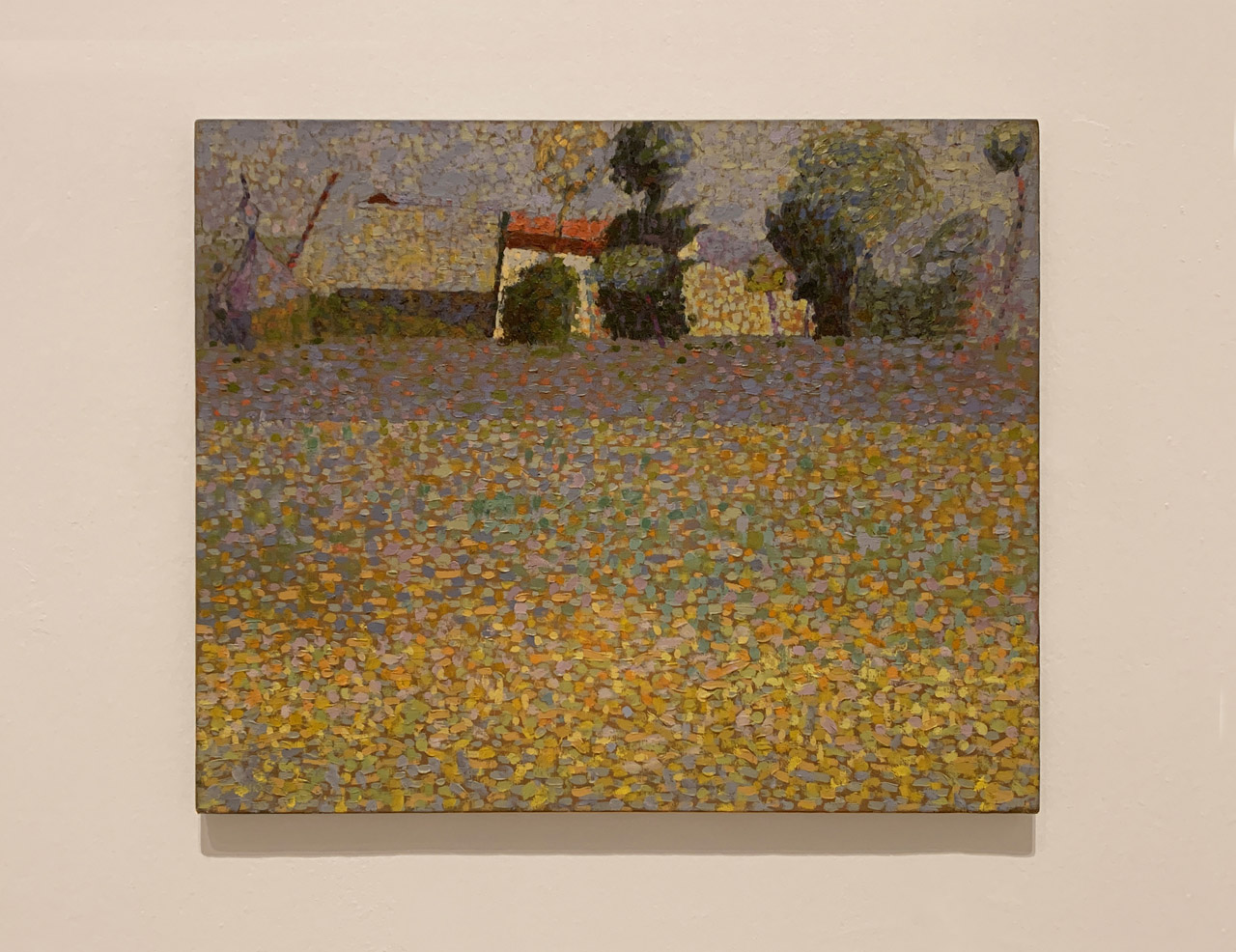 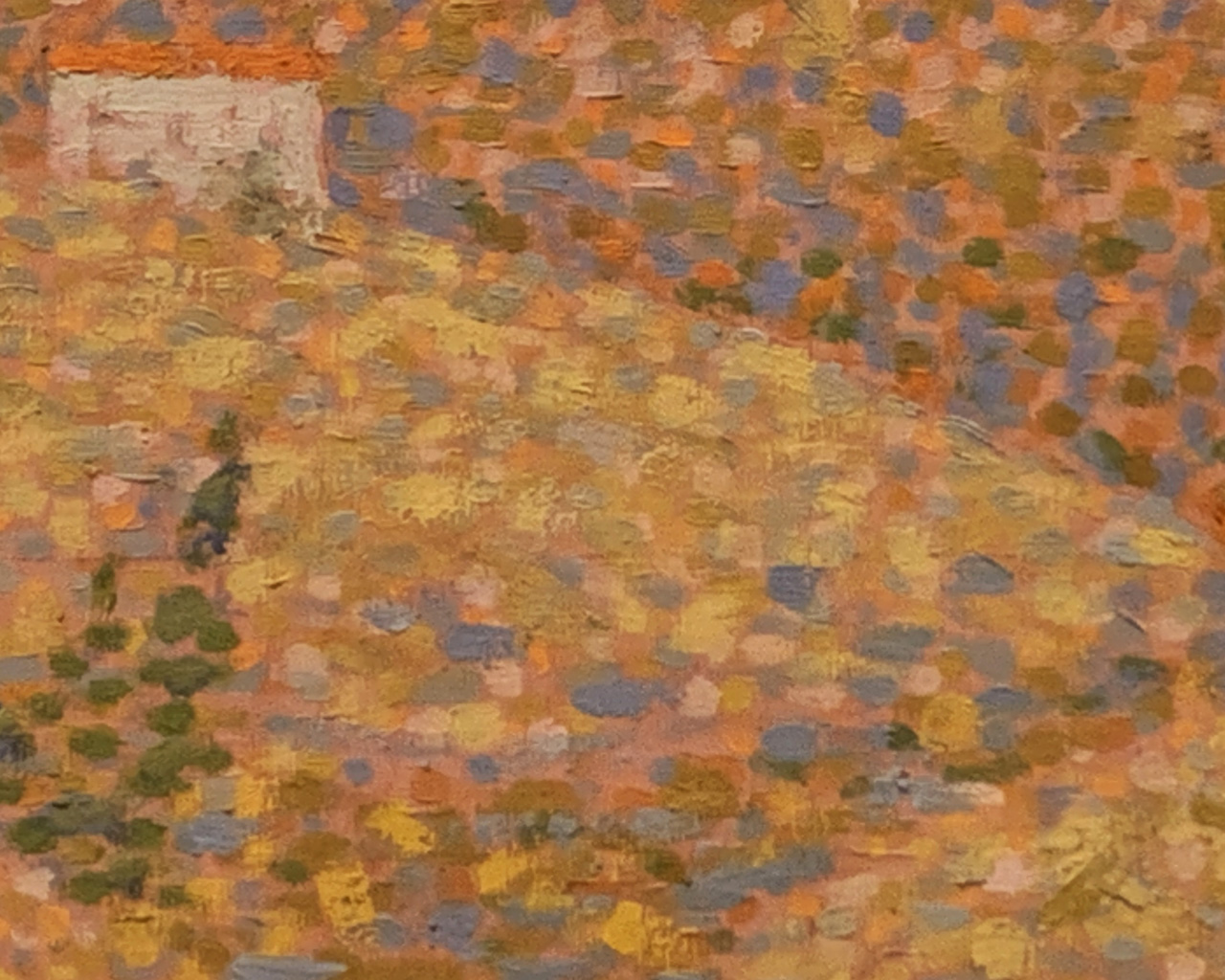 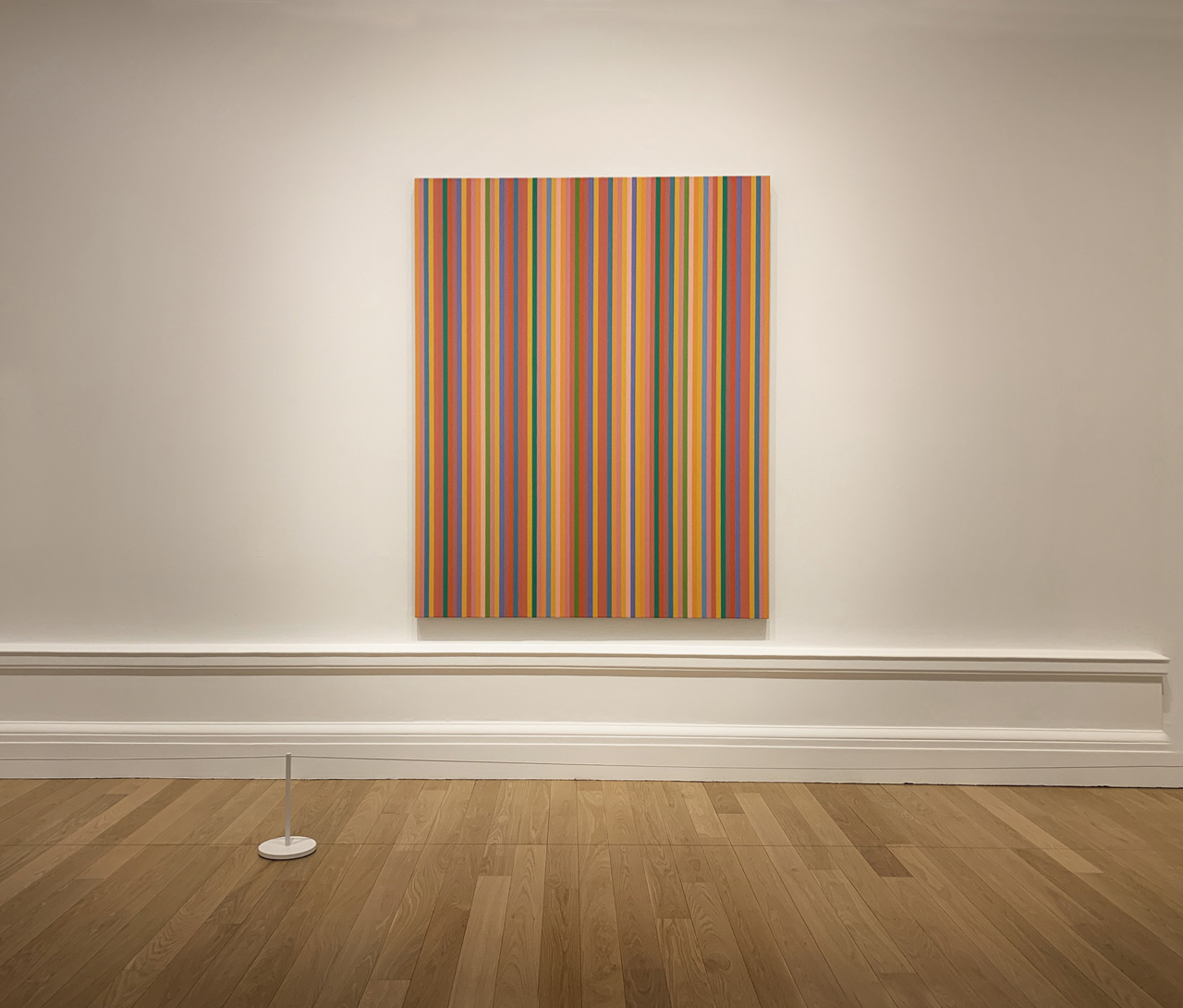 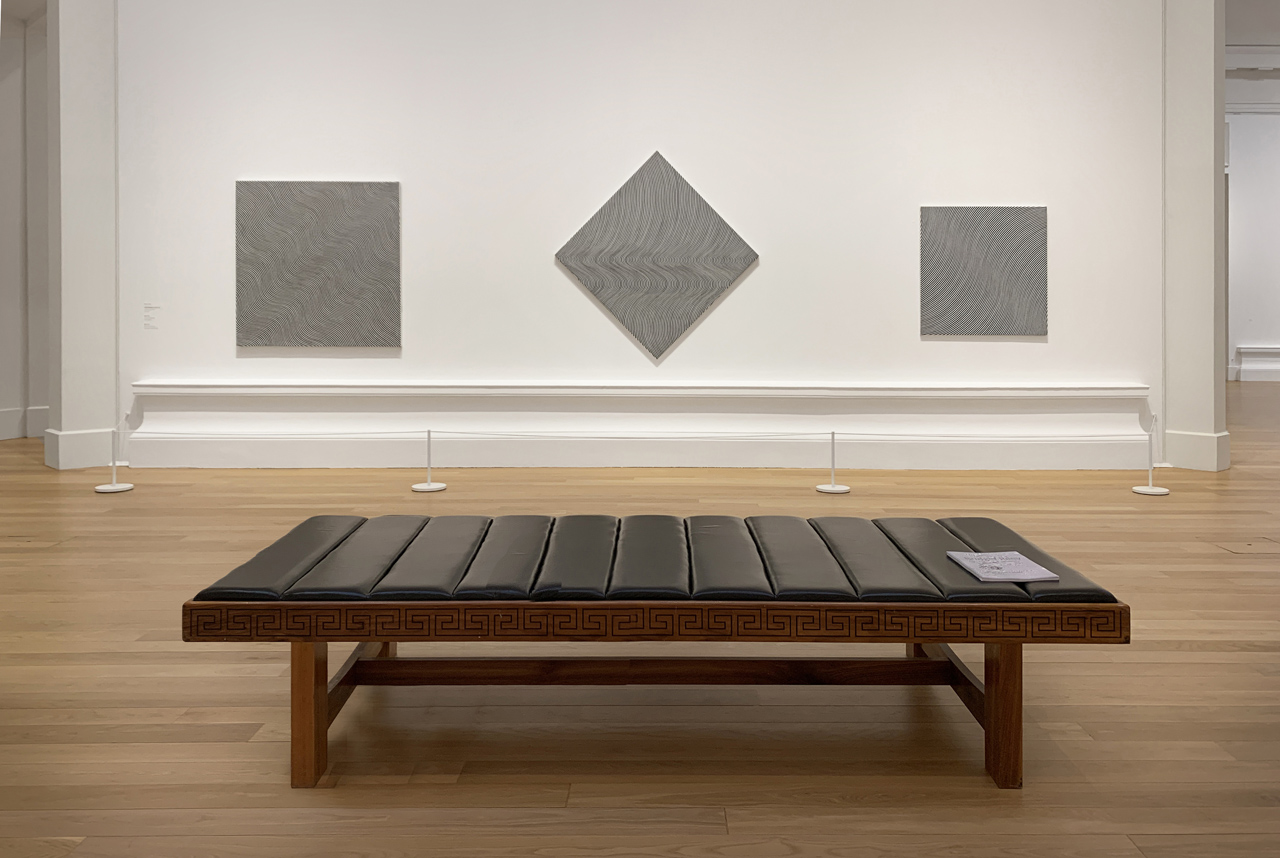 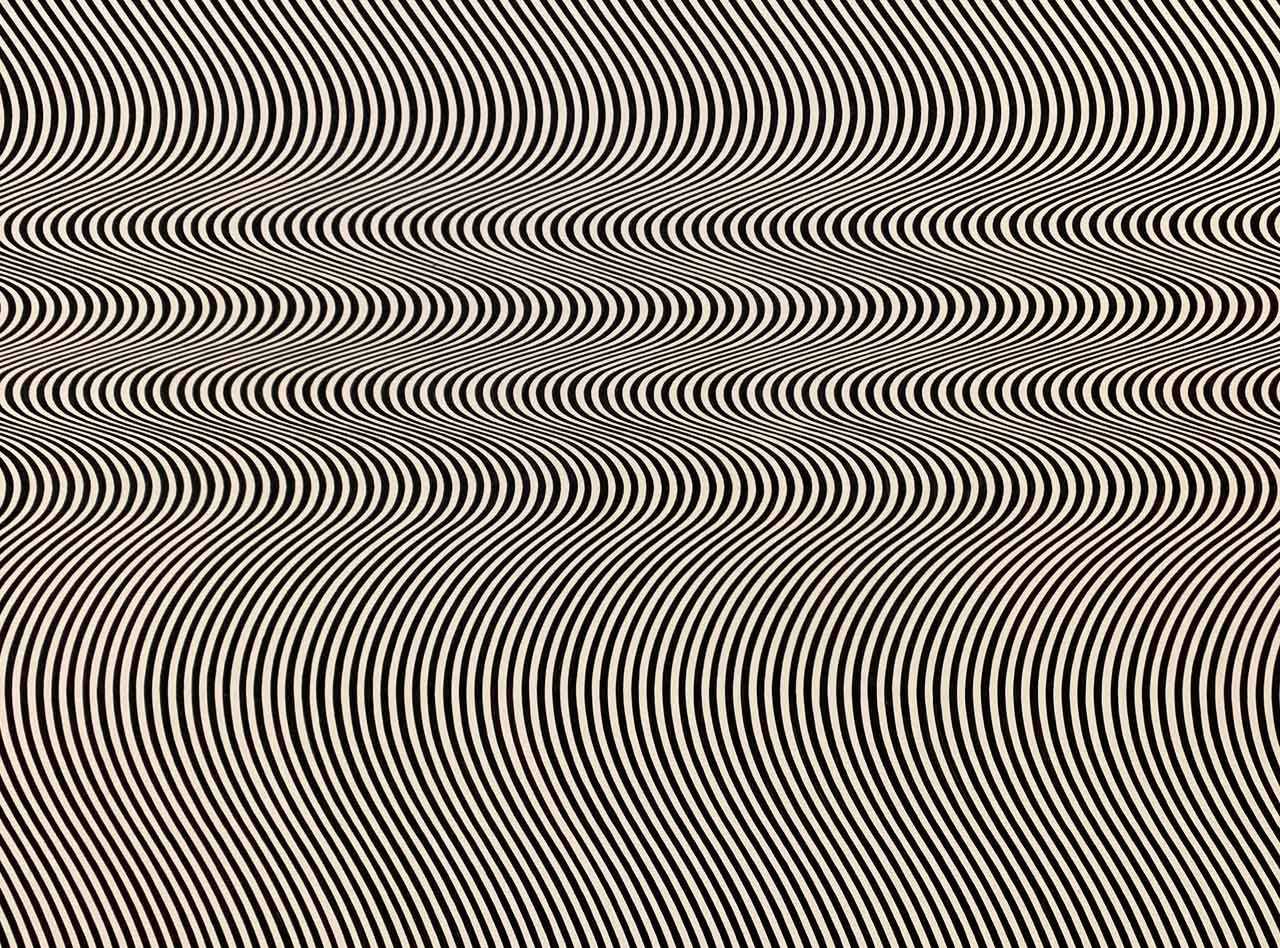