Invader (featured) has described his tiled global invasion as spreading like a benevolent virus, continually mutating and changing. If that’s true then the virus undoubtedly jumped the species barrier in 2004 when he created the first Rubikcubist piece from nine Rubik’s Cubes, each manipulated into his desired configuration to create an image from the just six colors available on the iconic logic puzzle. The technique is a natural development of his aesthetic which replicates the humble pixel and a major new exhibition of over 100 of these works opens tomorrow at MIMA in Brussels.

The toy itself dates from the same period as the golden era of video games, but the intrinsic playfulness of the medium is subverted in the Bad Men series. These works depict everyone from cinematic anti-heroes like Travis Bickle to real-life monsters such as Pablo Escobar and there is a contrast between the lightness of the pop images depicted and the darkness of the deeds for which those individuals are responsible. But the absence of black from a Rubik’s Cube means that Invader’s images avoid this chromatic absolute and, in so doing, the pieces capture their subjects with a surprising level of nuance, free from simplistic categorisation. The nature of the Rubiskcubism is that up-close images are largely illegible but step back, or view the work through the screen of a smartphone, and the picture becomes suddenly clearer. This creates an interesting metaphor for our perception of these antagonists; for some who were cushioned from the group’s actions by the luxury of time or geography, the Baader-Meinhof Gang were romanticized cult-figures; but they will undoubtedly appear very different to those who lived under their rein of terror.

Invader’s street work is strongly influenced by the culture and history of the cities in which they are situated. In contrast, the Rubikscubist pieces are notably more introspective and reveal more about the usually guarded artist. This is particularly true in respect of the Low Fidelity series, whose name references both the sound quality of vinyl records and the deliberate degradation caused by the Rubikscubist approach. The exhibition guides us through Invader’s musical history; from the heavy metal he listened to with his young classmates to the punk and new wave where he ultimately found his musical home. But music is more than just an inert soundtrack to our lives and the influence of punk is wrought large across his career: the rebellious urge to create work in the streets; the subversive use of materials; the DIY approach to self-publishing his own books and maps. Some albums like Lou Reed’s Rock n Roll Animal have been chosen based on their musical strength, while the inclusion of others like the soundtrack from Grease instead reflects Invader’s appreciation for the album’s visual aesthetic. One work of particular interest is the cover of The Cure’s Pornography album; the cover image is already murky and distorted but, if anything, the Rubiskcubist treatment makes Invader’s version unexpectedly more legible than the original.

Rubikscubism derives its name of course from the movement founded in the early 20th century by Braque and Picasso and a life-sized reimagining of the latter’s Les Demoiselles d’Avignon dominates the third floor of the exhibition. But the dexterity and cleverness of Invader’s medium lies in the way that it plays with qualities from a plethora of other movements and, as a result, creates a dialogue with art history as a whole. Throughout the Masterpiece’s section of the exhibition we can see that Rubikscubism shares the orderliness of Ingres’ neo-classical La Grande Odalisque; the pure abstraction of Mondrian’s de stijl Composition II; the utilization of individual spots of color which make up Seurat’s post-impressionistic Bathing at Asnières; the degradation through reproduction of the image seen in Warhol’s pop art Self-Portrait and the playfulness of Magritte’s surrealist Son of Man.

The portraits of Pelé, Maradona and Zidane elsewhere in the exhibition might at first appear incongruous, given that Invader has previously noted that his only real interest in football is the distraction which big matches provide for the police when he wants to put up a new mosaic in public. However, the framing of the faces within the evocative borders of Panini stickers and the obfuscation of their faces through pixillation portrays them far more as cultural icons whose significance transcends their utility on the pitch and whose reputations bridge social and generational divides.

Ernő Rubik, the inventor of the eponymous puzzle, has described the cube as ‘many things, but most importantly, to me anyway, it is a piece of art. It speaks to all, bringing us together in our universal quest to create order from chaos.’ The exhibition concludes on the museum’s top floor where Rubik Summer Memories demonstrates that the cubes are a surprisingly adept medium that are even capable of capturing the tenderness of childhood memories. 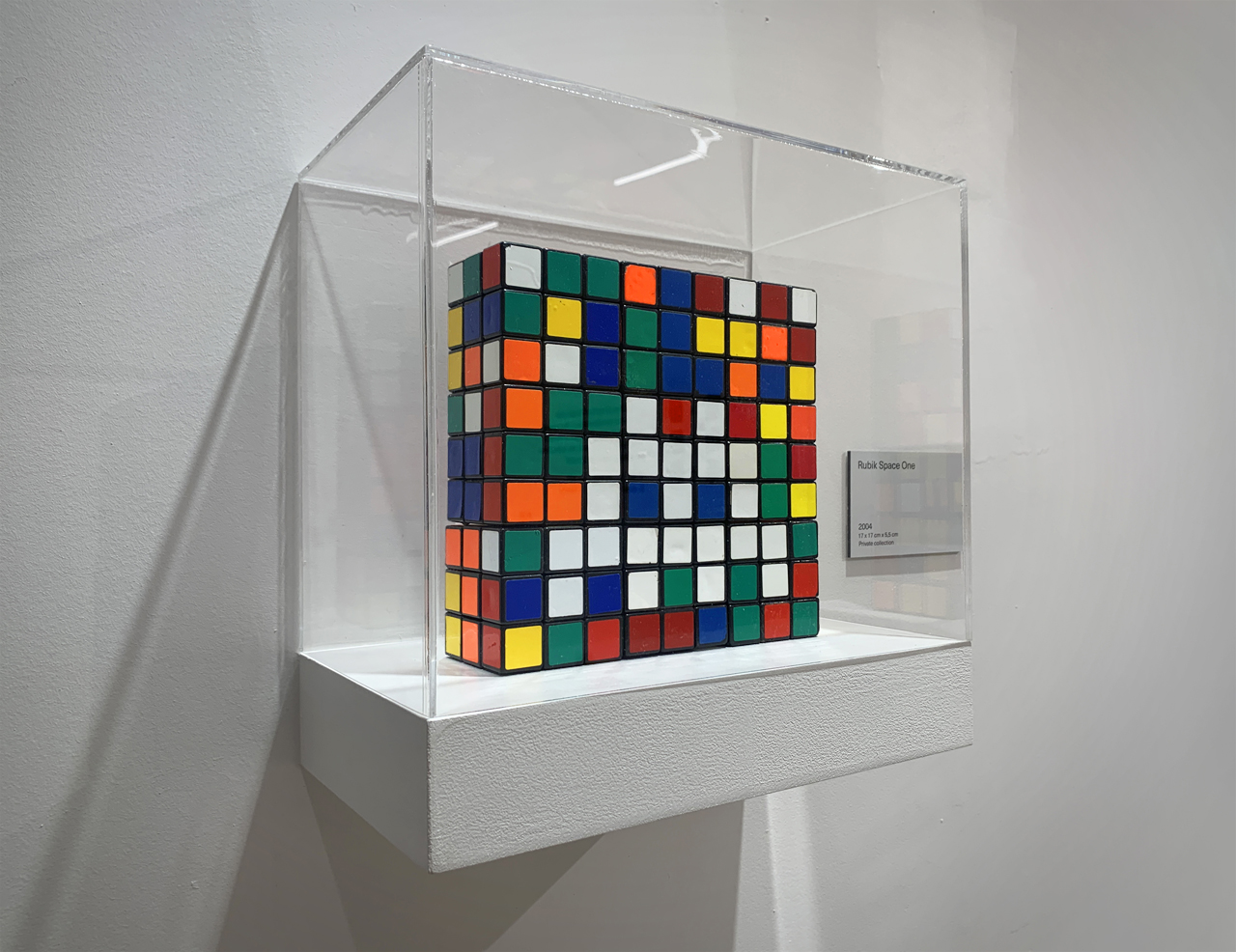 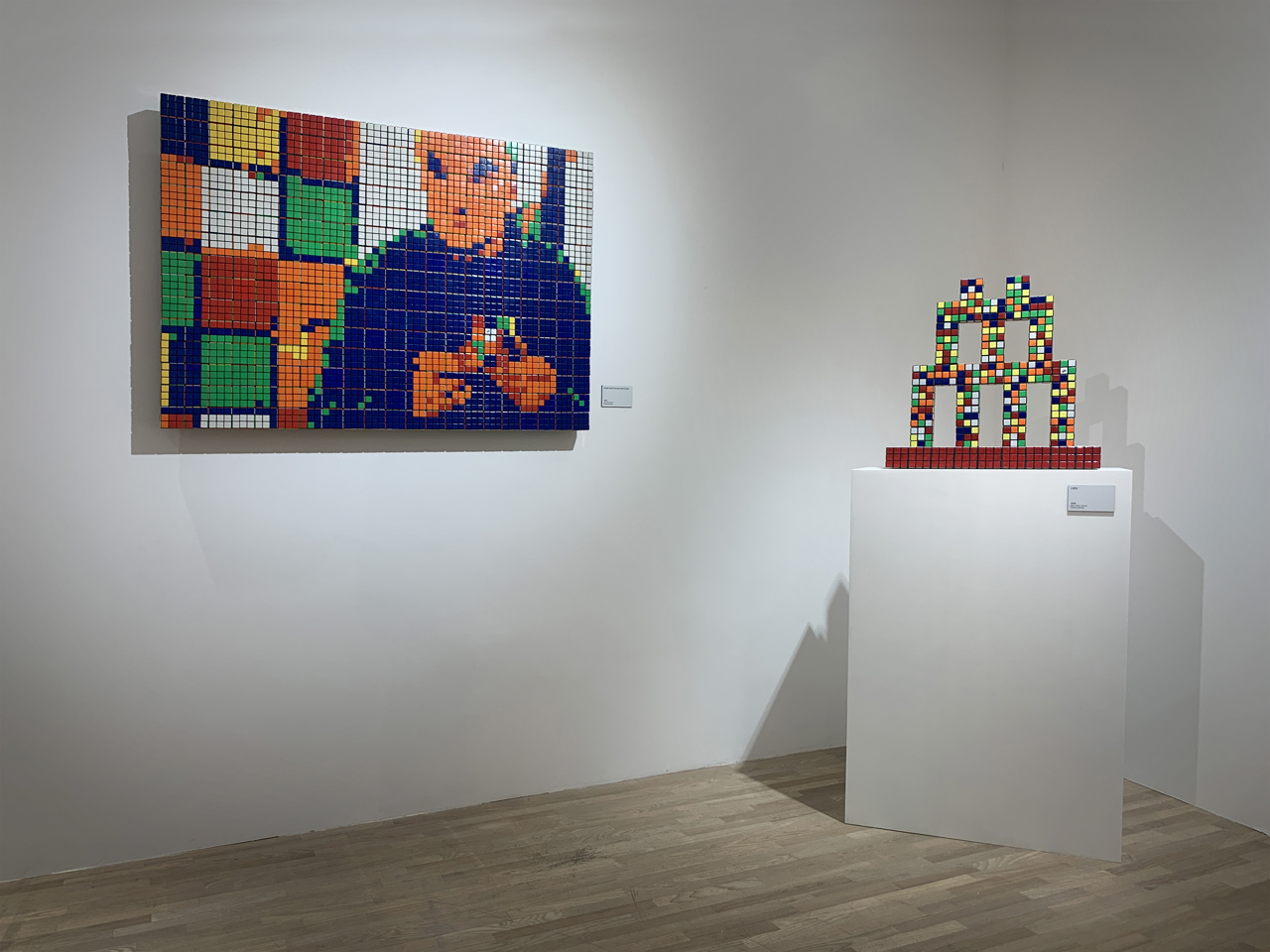 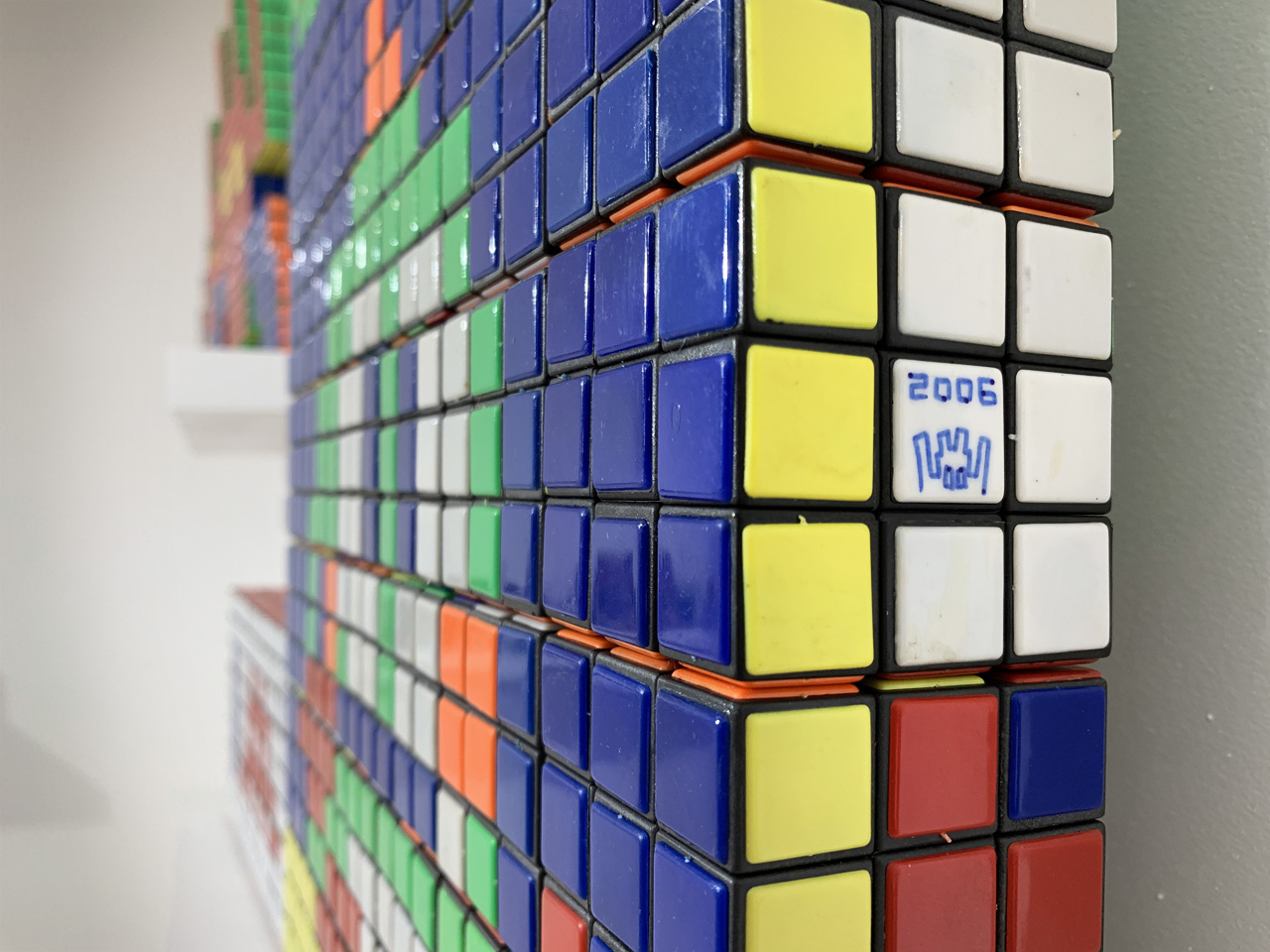 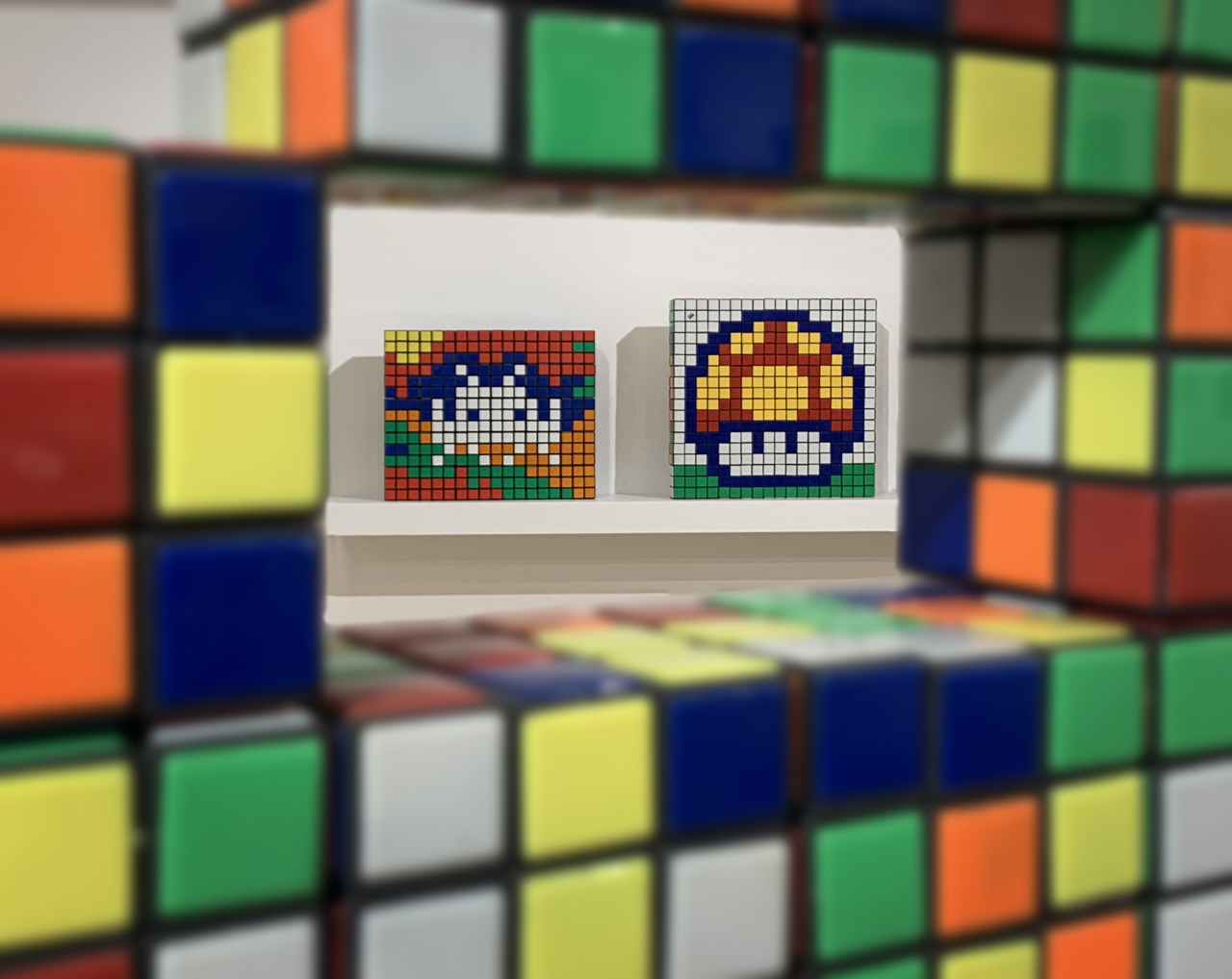 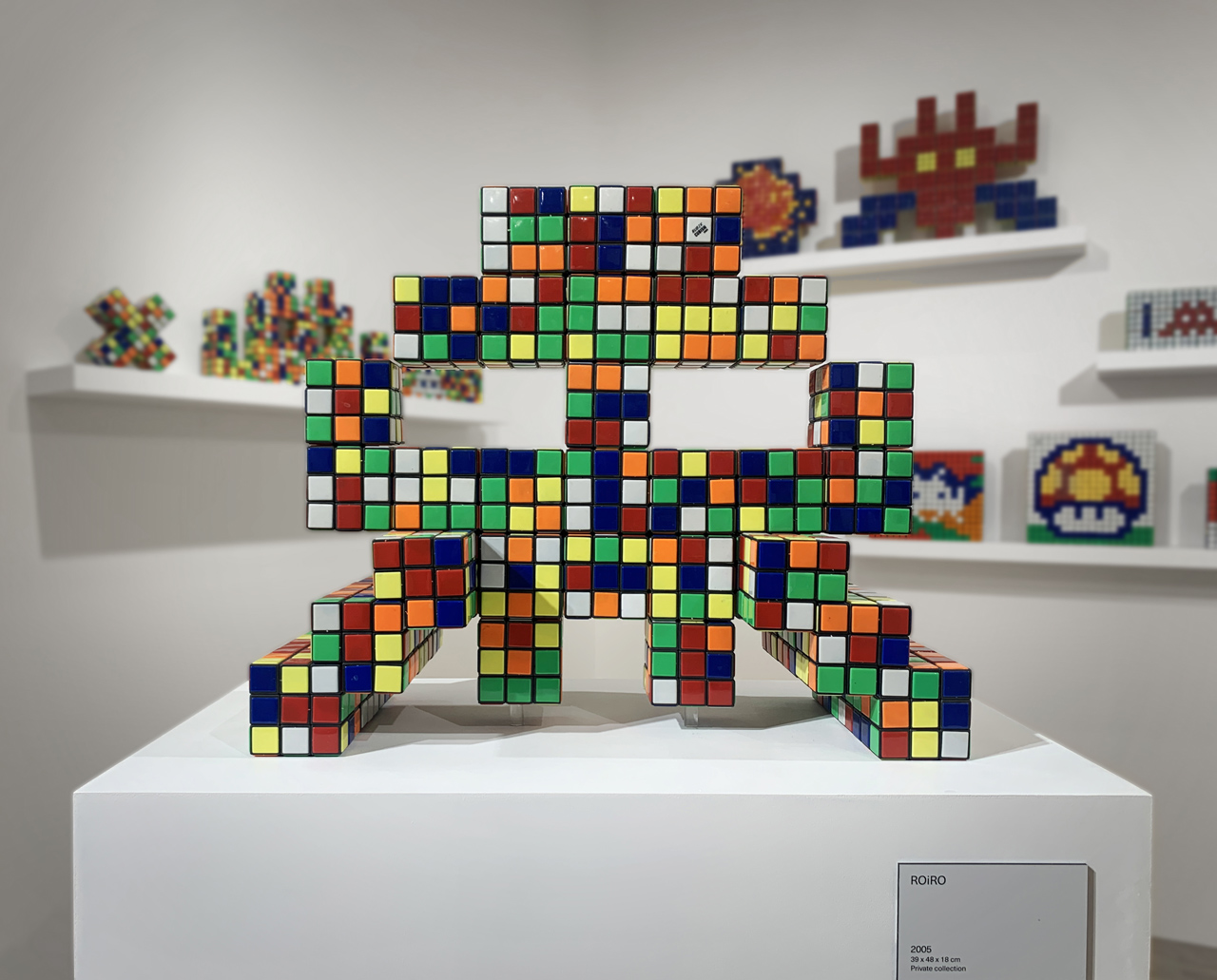 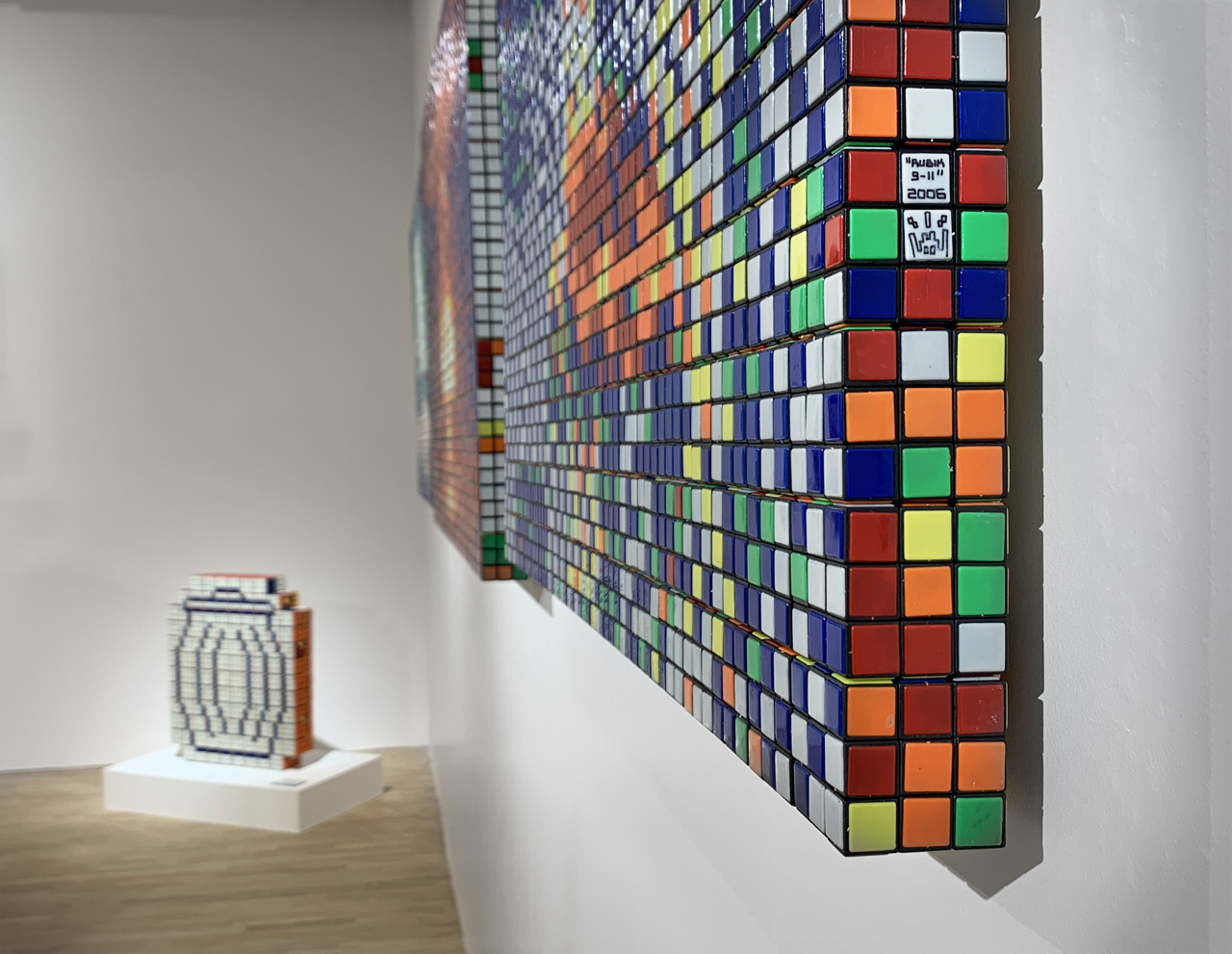 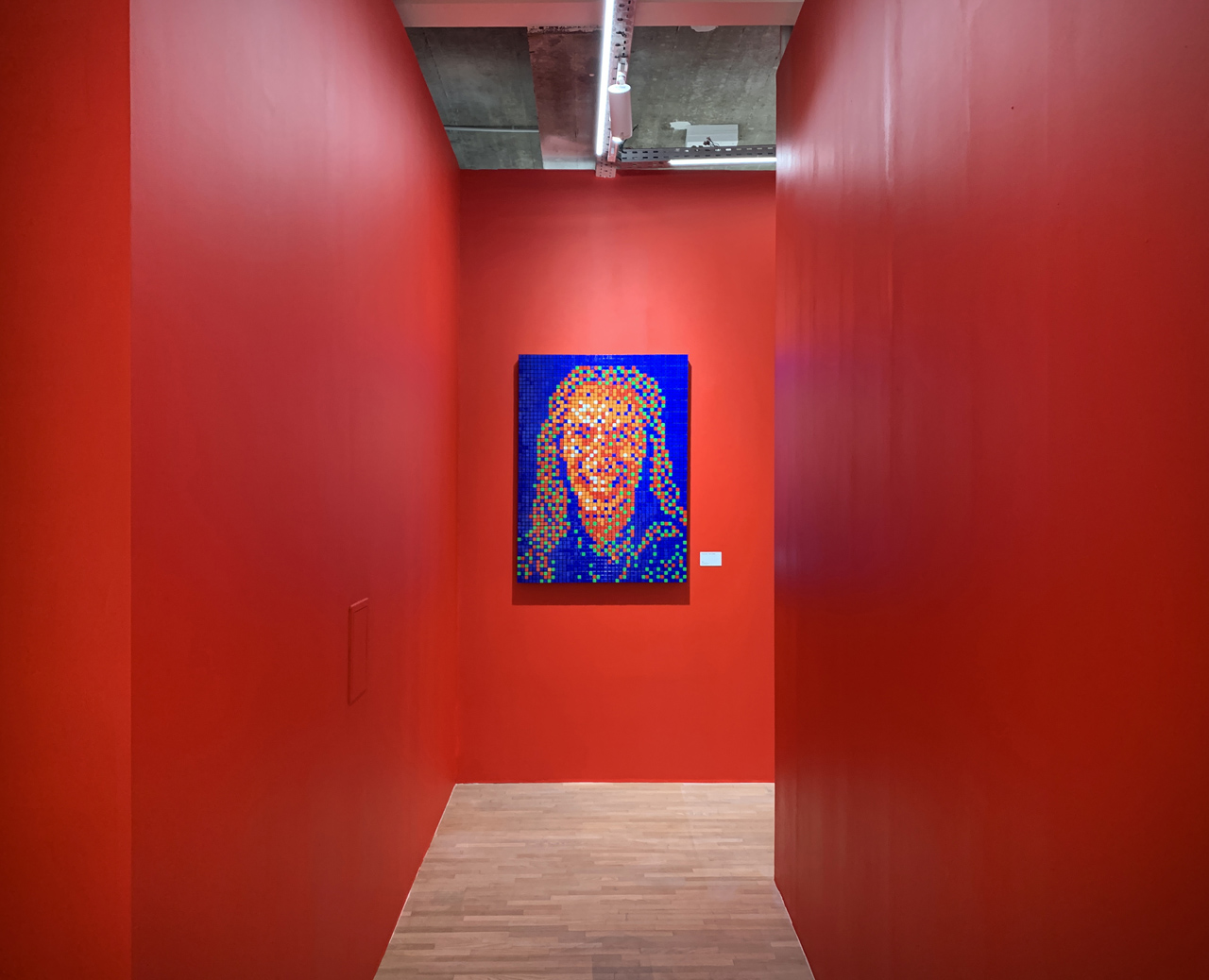 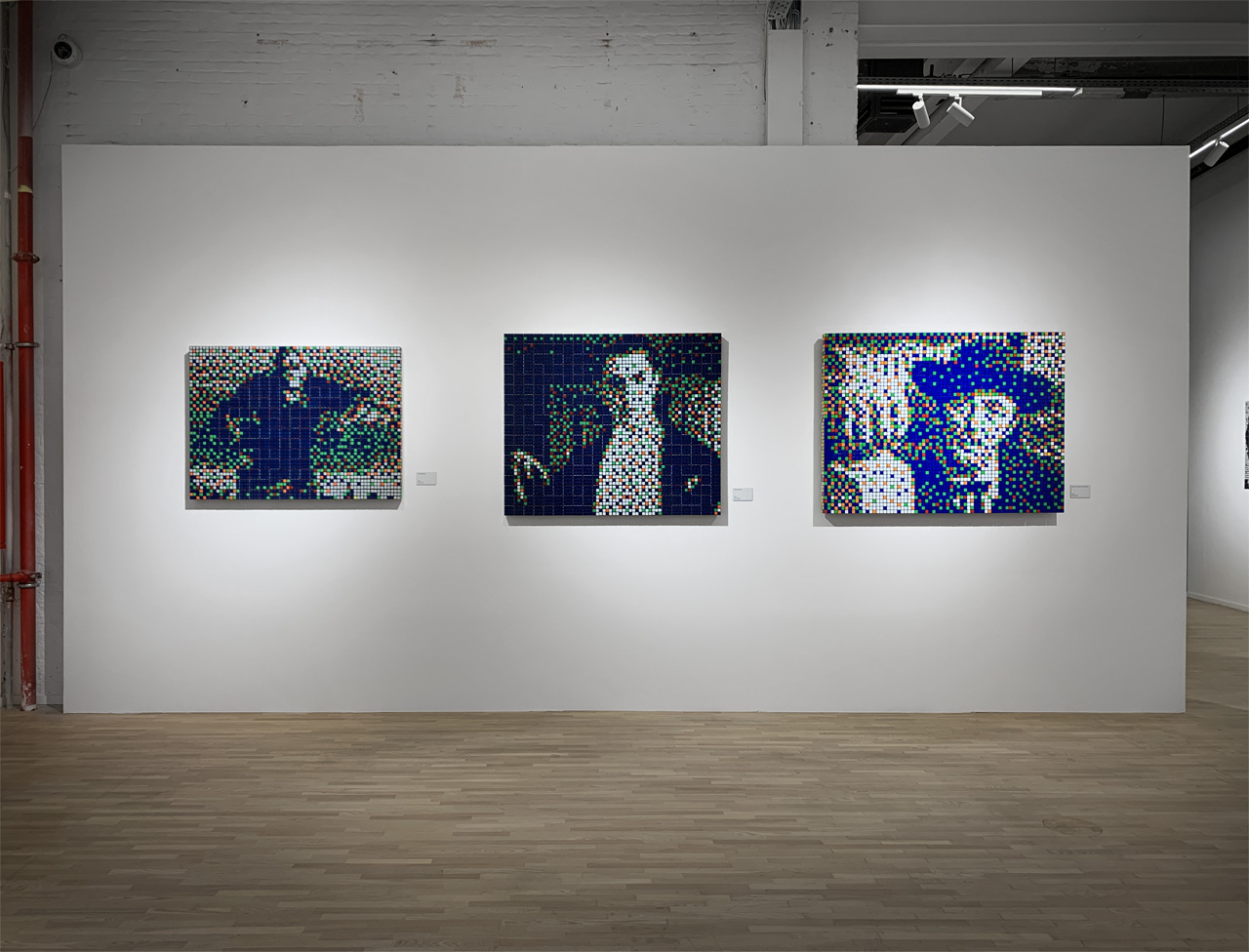