A story came out today about a section of wall for sale on ebay that had a Banksy stencil on it from his times in Jamaica.Â  The wall is free … but the catch is you have to purchase a set of photographs (one of which seen below) that chronicle the “deconstruction” of the wall – starting bid 100K.Â  The photos are entitled “The Rock” taken by photographer Peter Dean Rickards of The Afflicted Yard, presumably the “owner” of the Banksy. So if you have a lot of money lying around, you can in the words of the seller “hoist it onto your wall at your mansion and have a big party with lots of coked-up models and invite the BBC.”Â  Full story in after the jump. 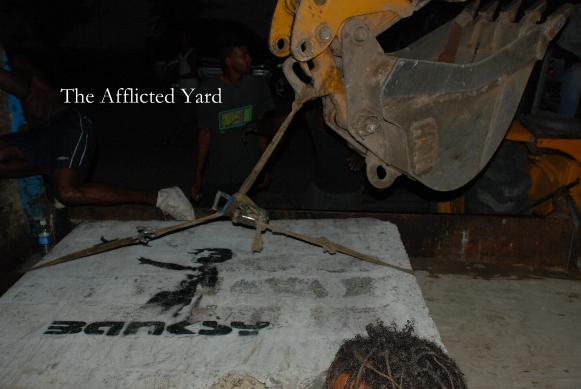 It was a non-eventful day when he actually drew them. He bought some construction paper from a local pharmacy and cut the stuff out. Then he drew this stencil of a girl on an exterior wall and some rabbits on the inside the pub itself. I kind of just stood there taking his picture because it was something to do. I had already captured his face back at Bujuâ€™s studio where he had done some other stuff so this was just extra. I didnâ€™t really think much of it. I mean I live in a place where people get shot for marking up peopleâ€™s walls (usually with a paintbrush), so a few sprayed stencils on the wall of a pub didnâ€™t strike me as particularly interesting.

Later when I heard how much his stuff was selling for, I contemplated going back and chopping the wall down. It was there for years and Iâ€™m sure Iâ€™m not the only one who thought about doing it. Mona road is heavily travelled by a lot of foreign students on their way to the university so people from all over the world would often mention it, but nobody ever took the steps to cut it downâ€¦till this last August when I got a email from someone asking about my knowledge of the locations Banksy had tagged. Thatâ€™s when I figured I should probably go get it before someone else did.

The wall is the last remaining tag that he did in Jamaica that can be seen in public. Itâ€™s also the only remaining stencil that has the tag BANKSY on it. The other ones were:

-A bridge in Charleton gully which was painted over.
-A rusting old ship near the airport (a stencil of a skull, crossbones and the signature â€˜Banksyâ€™has since faded)
-Buju Bantonâ€™s studio in Kingston ( where there is another â€˜balloon girlâ€™ and some flying insects.

The wall is 60 inches by 55 inches and about 7 inches thick. It weighs like 2000 pounds though that is just a guess. I spent the day getting a bunch of drunk guys to cut it down and raise it onto a flatbed truck tied to one of those sealtbelt-type industrial straps. I was amazed that it didnâ€™t smash to pieces which would have really been an incredible waste of energy and patience. All the guys in that video (including me) had no real idea how to cut the thing down (much less move it) and were completely impaired by the time we actually got it tied to a backhoe (borrowed from a nearby construction site). Ironically, the damn thing almost fell on me in which case there would be a much funnier headline : Jamaican who revealed Banksy killed by falling artwork.

So now I have this wall sitting in a garage here in Kingston and the guy who owns the garage is pissed because the back part of his car doesnâ€™t fit into the garage properly anymore (itâ€™s a very small garage). I was going to put it on display at Miami Art Basel this year but then it occurred to me that it would cost about 10k to ship over there and I really wouldnâ€™t know what to tell customs as a value priceâ€¦so instead, Iâ€™m not going to sell it. Instead I’m selling the photographs of the excavation on EBAY and giving the wall away to whoever buys the set.Â  Since it has no declared value, you can get it out of here at the estimated value cost of $0.01 and then hoist it onto your wall at your mansion and have a big party with lots of coked-up models and invite the BBC.