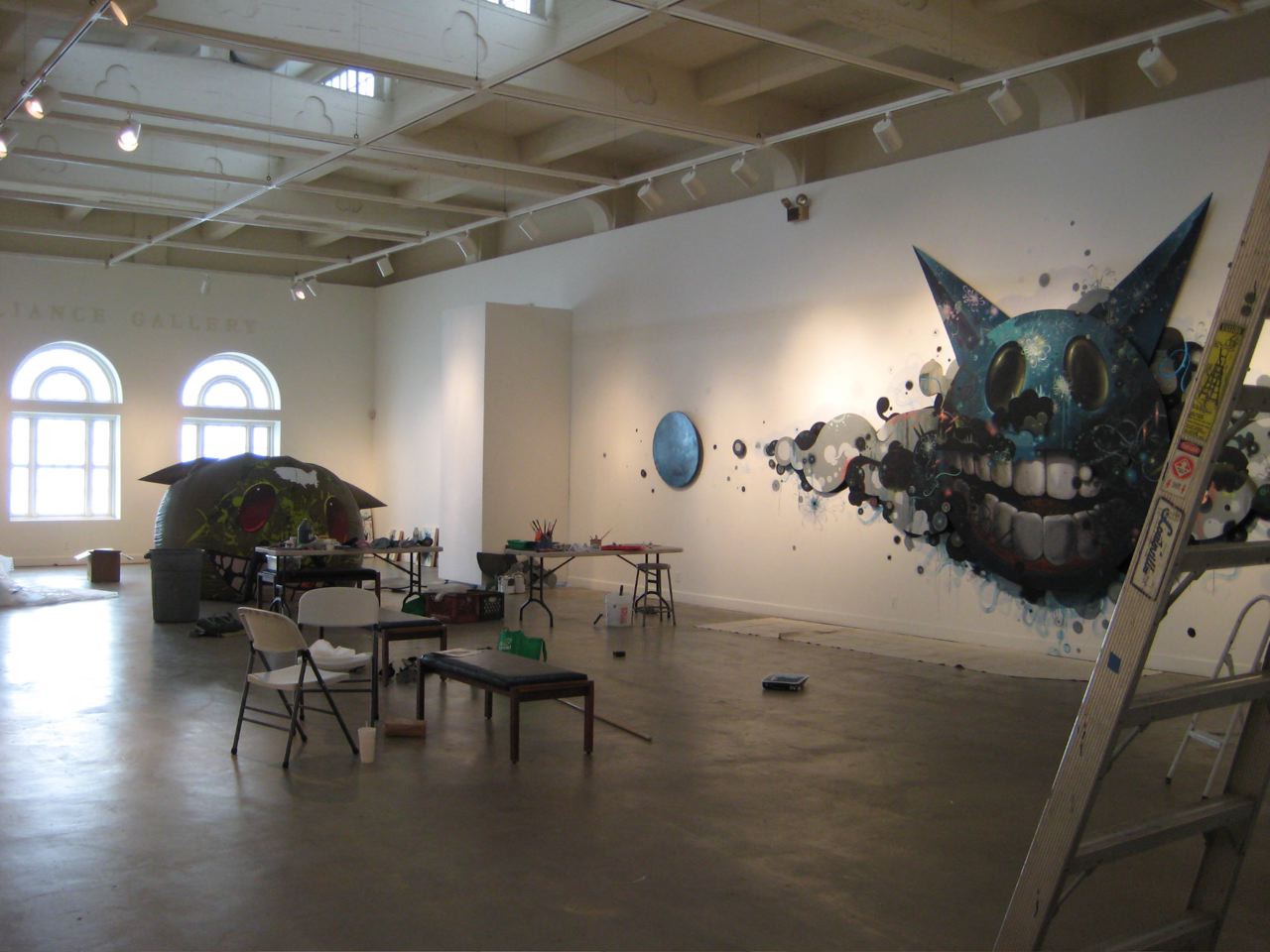 Jeff Soto’s first museum show “Turning in Circles” (previewed) is set to open this Saturday, December 13th at the Riverside Art Museum. He has been hard at work on this show for over a year now and it promises to be an epic one. We sat down with him to talk a little about the show after the jump… 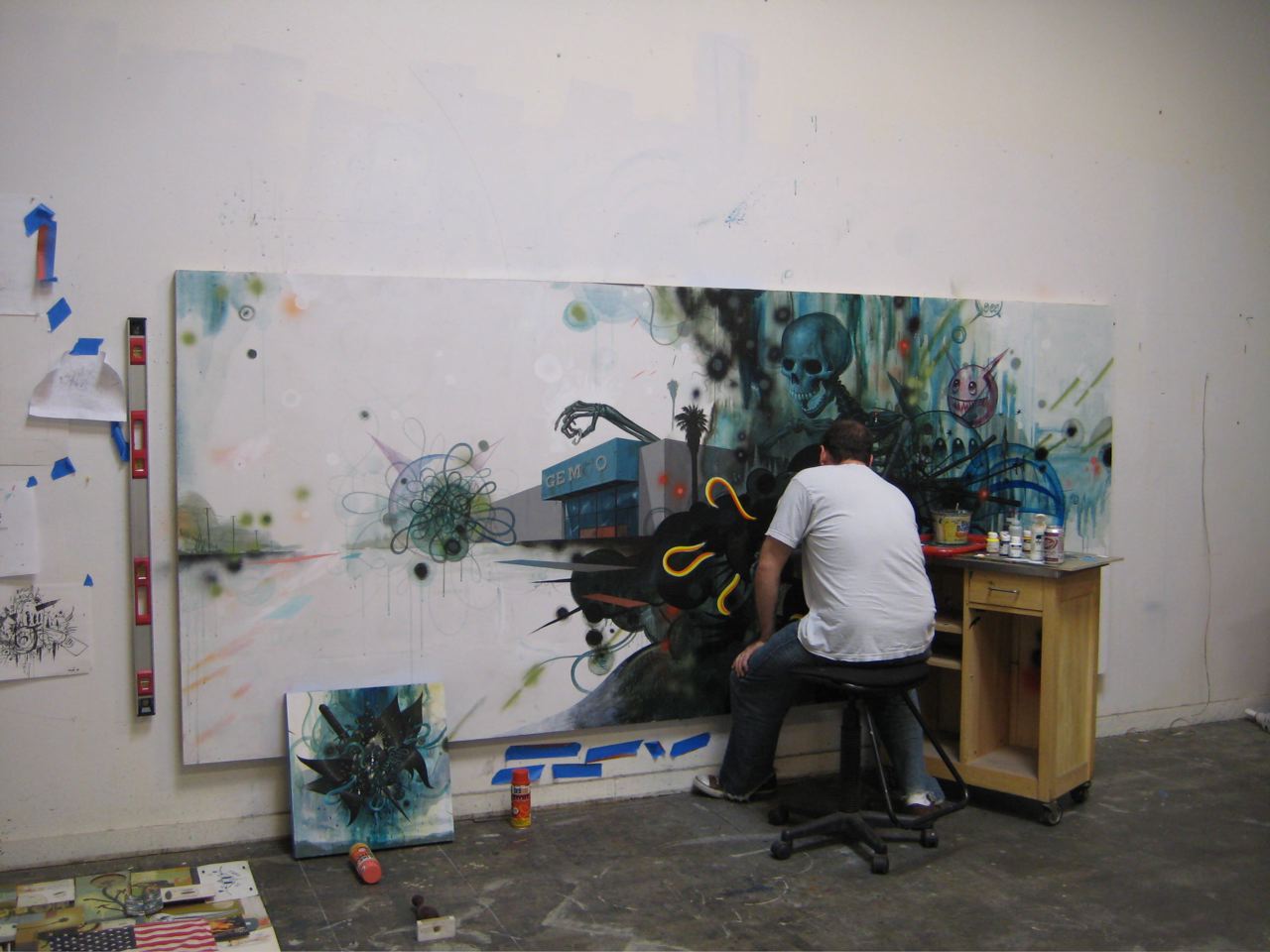 Arrested Motion (AM):Â  Saw you show up on various blogs and friends’ photos and knew that attended Art Basel again this year.Â  Can you tell us a little about the experience and what you did down there?

I only got to see about half the art fairs I really wanted to check out, it’s just impossible to see it all in a couple days. I am not a big party guy; I lose my voice really fast trying to talk over loud music and I don’t drink much, so I was more about going to the fairs and seeing art. That being said, we did go to some parties that were pretty cool, in particular the one Shepard Fairey threw. It was a big art party, lots of good people and awesome music. Here’s some more of what I did. 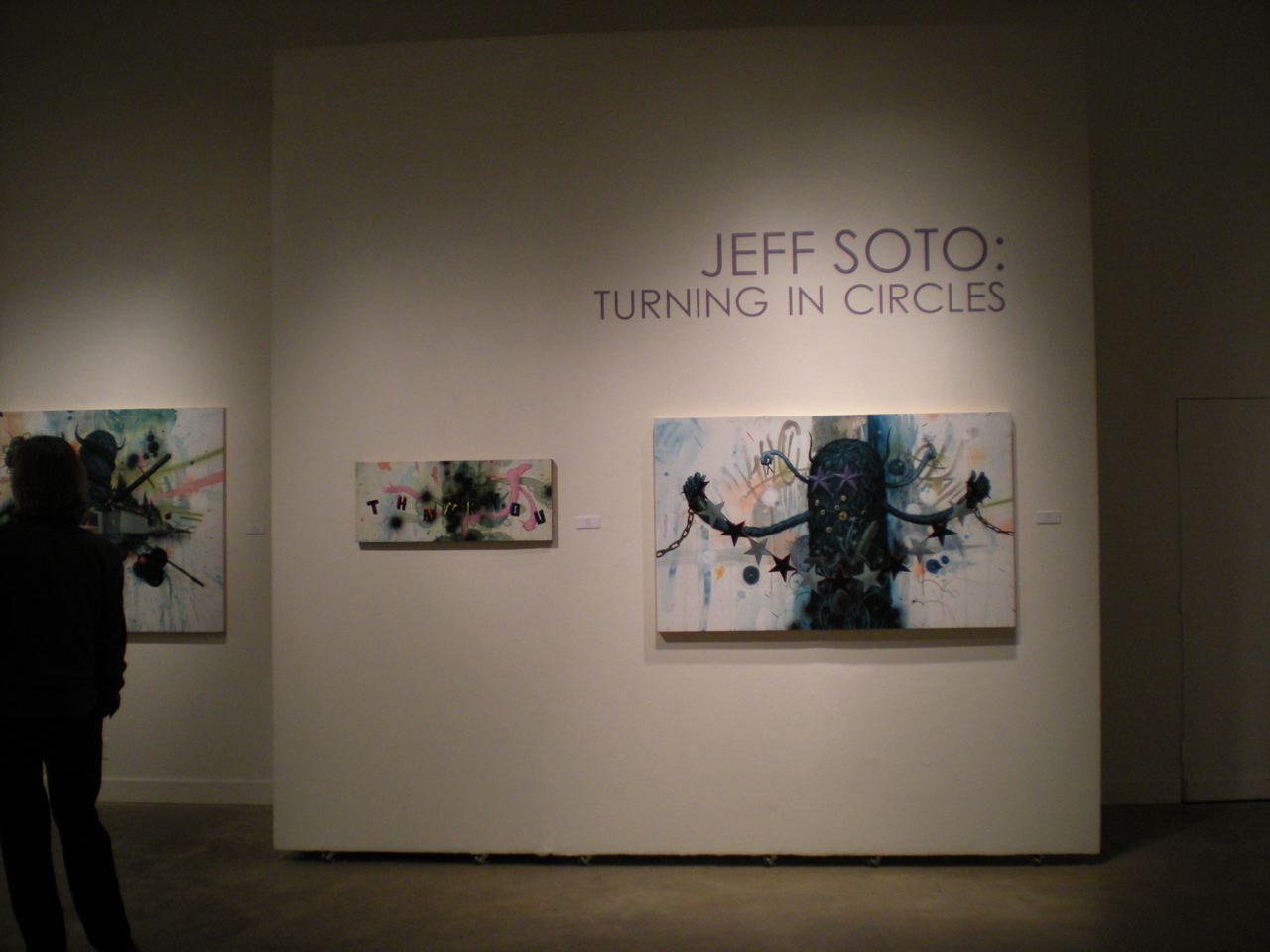 AM:Â  We are excited to see you have your first museum exhibit.Â  How is planning and producing a show like this different than for a gallery?

JS:Â  The fact that it’s a museum wasn’t that different for me, the show came together like any other. The big difference was that the Riverside Art Museum is down the street from my studio which let me work much bigger and take more time on things. I worked in the museum for almost two weeks on the large installation, I brought all my supplies and made myself at home. The staff there is awesome, they let me do my own thing and were quick to help when I needed it.

I think also, I really tried to push myself with this one. I mean, I always try to push myselfÂ  and cover new ground with each show but since I live here I don’t want to disappoint the home crowd. I had over a year to work on this show which is the longest amount of time I’ve spent on one project. 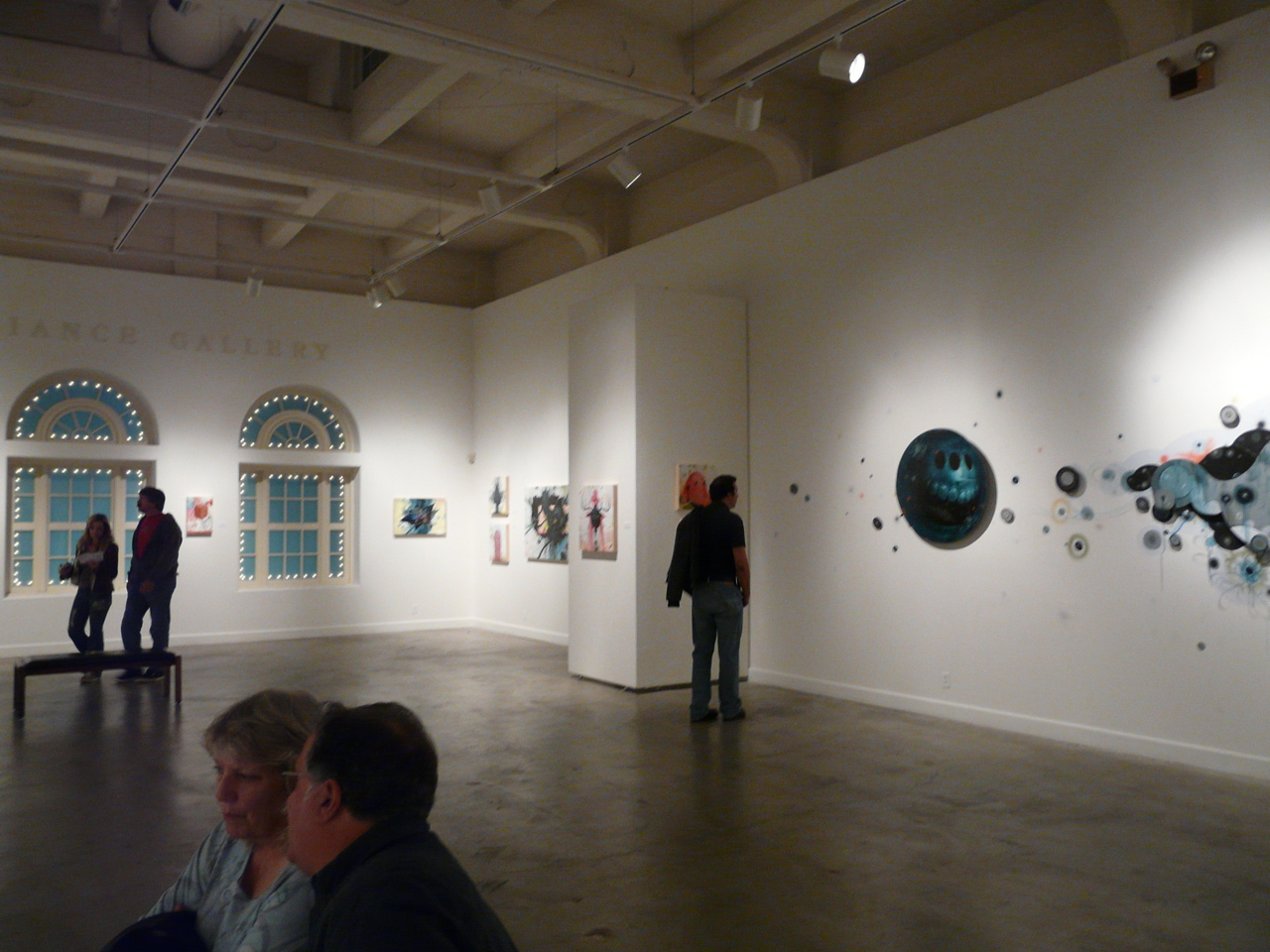 AM:Â  Were you trying to get a message across or working on a theme for this body of work?

JS:Â  I always try to stick to one theme when I start out and by the end I’m all over the place. The themes I tend to gravitate towards- politics, environmental issues, war, etc. are all represented here. But I’m also telling some stories this time. There’s stories of the Soto boys, growing up in Riverside and some ephemera from our childhood.

The title Turning In Circles relates to our habit of repeating the same mistakes as our ancestors, living the same lifecycle (birth, life, procreate, die), and it also alludes to the year it took me to work on this show. One turn around the sun. 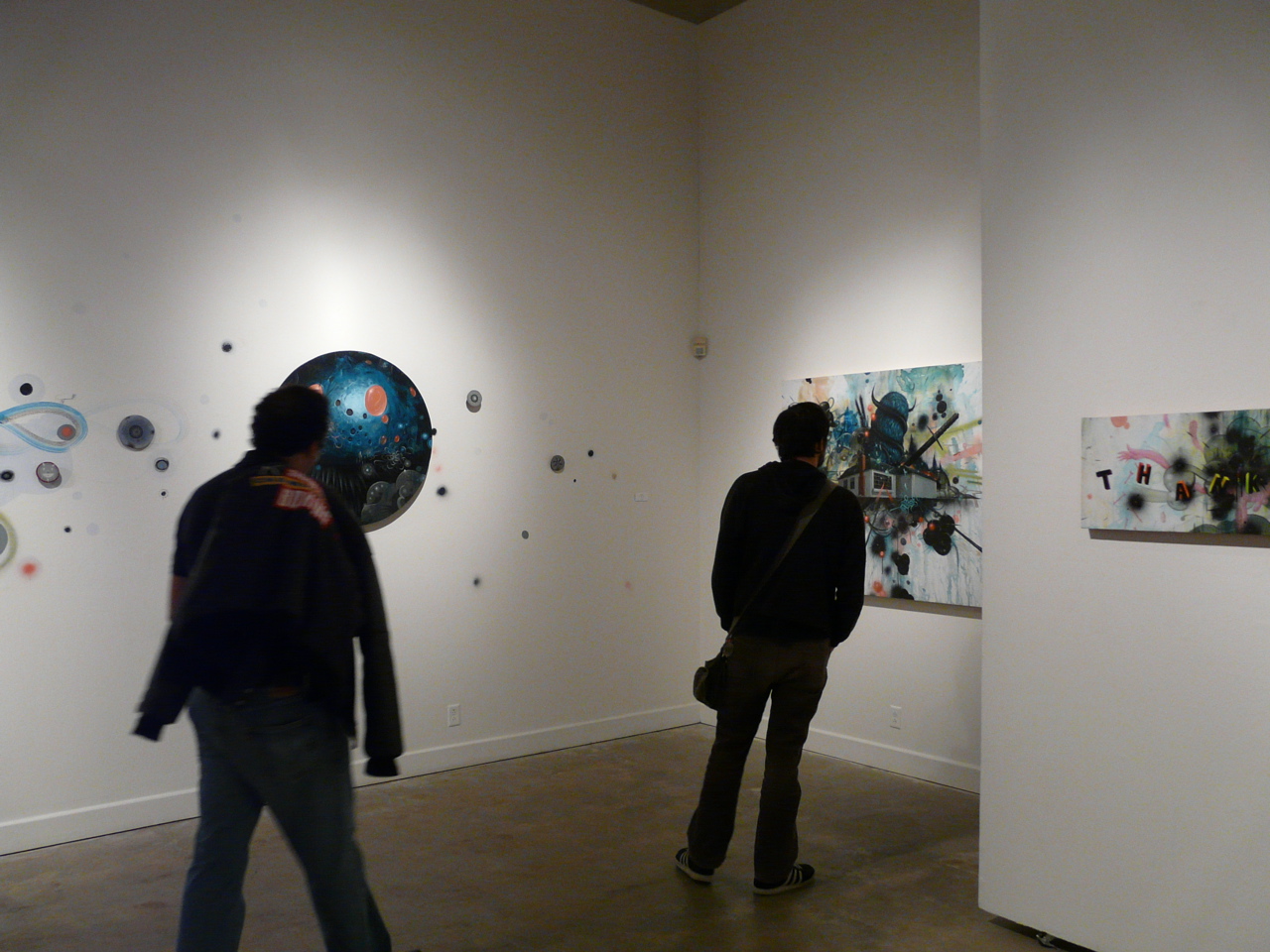 AM: Can you share with us any shows & projects you have planned for 2009?

JS:Â  Well we have a baby coming in March so I have a feeling that’ll be the big project of 2009. Other than that I’m doing a solo show in London at Stolen Space in May and taking part in the New Image Art 15th Anniversary show. That’s in January. I’m also working on something for October with Eric Nakamura of Giant Robot. I think 2009 is going to be a little crazy. hehehe…

AM: Thanks for you time Jeff!Â  Hope everyone can make it out for the show this Saturday.