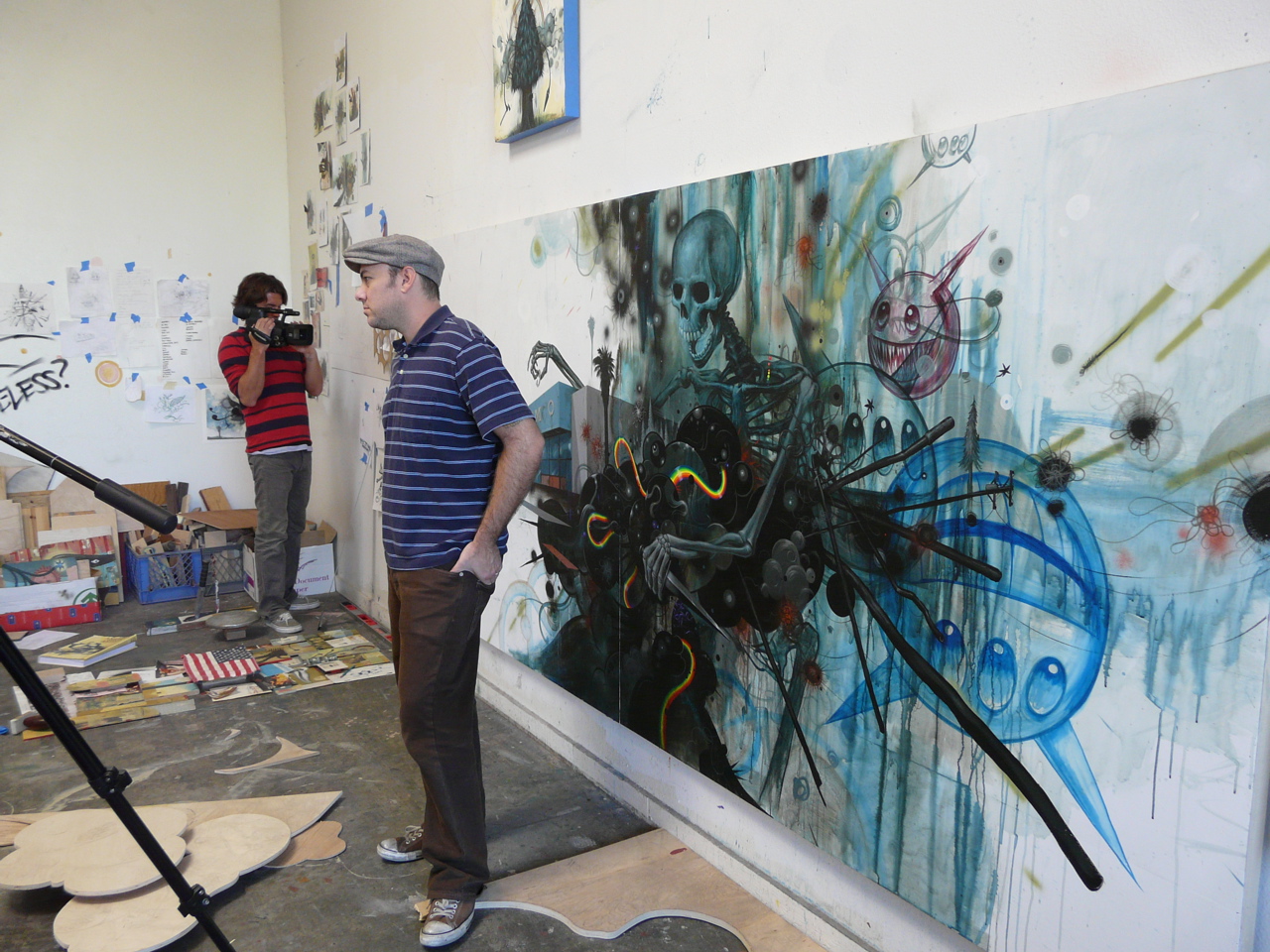 Stopped by Jeff Soto’s studio last week to check out his progress on his upcoming show at the Riverside Art Museum as well as introduce him to the guys at Modus Films. We’re working on a little project that we think you will enjoy. In the meantime, take a look at one of the large paintings he is working on! More after the jump. 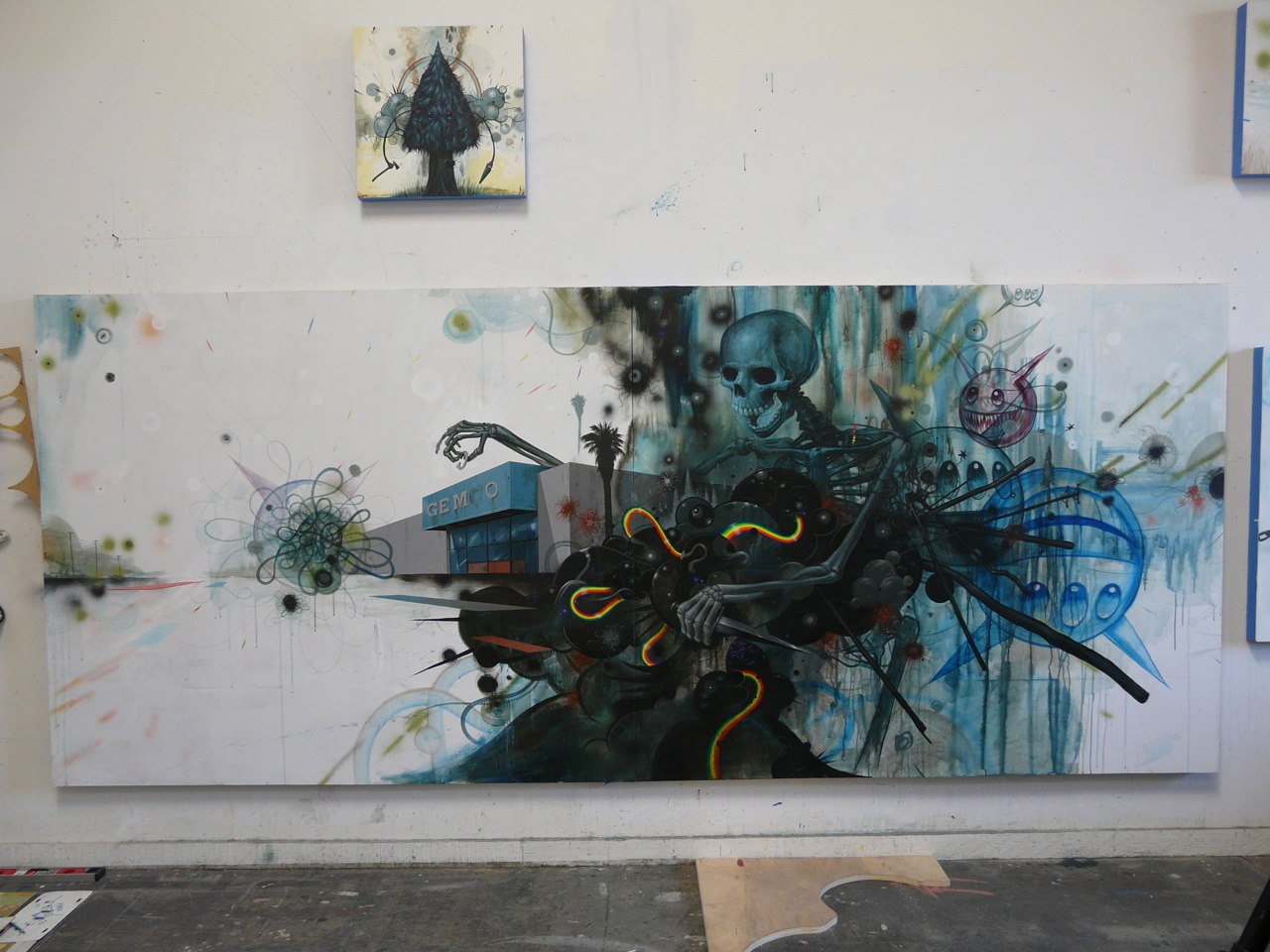 You will really have to see this in person to get an idea as to how massive it is. There will be many larger pieces in this show as the space he has to cover is more expansive than the usual gallery space. Fortunately, Jeff has no problems working large as his roots lie in graffiti and large murals. In fact, the show is about a year in the making and since he has been painting larger scale, he now feels somewhat restricted when he goes back to working on smaller pieces. 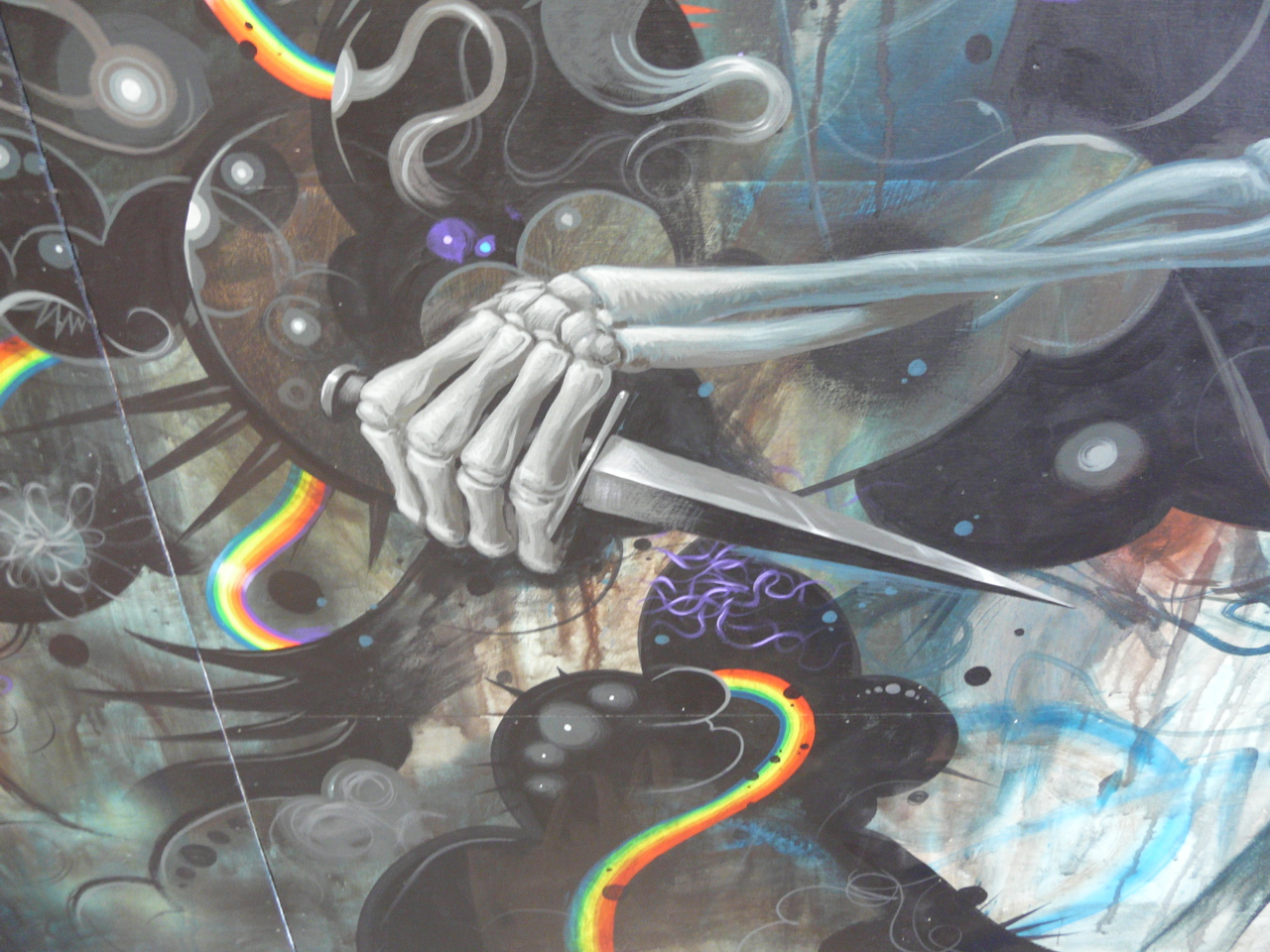 Jeff tells us most of his paintings are done for this show and he is now working on his installations (more on this later). Looking over his body of work, one gets the sense that he has really gotten comfortable with and has mastered what my friend likes to call Soto 2.0 (with his earlier more figurative work with robots and such categorized as Soto 1.0). It’s hard to characterize exact periods in an artist’s development as most are constantly evolving but to the casual collector we certainly believe that this style is definitely recognized as the second phase of his Soto’s career with this museum show being a landmark show for it. 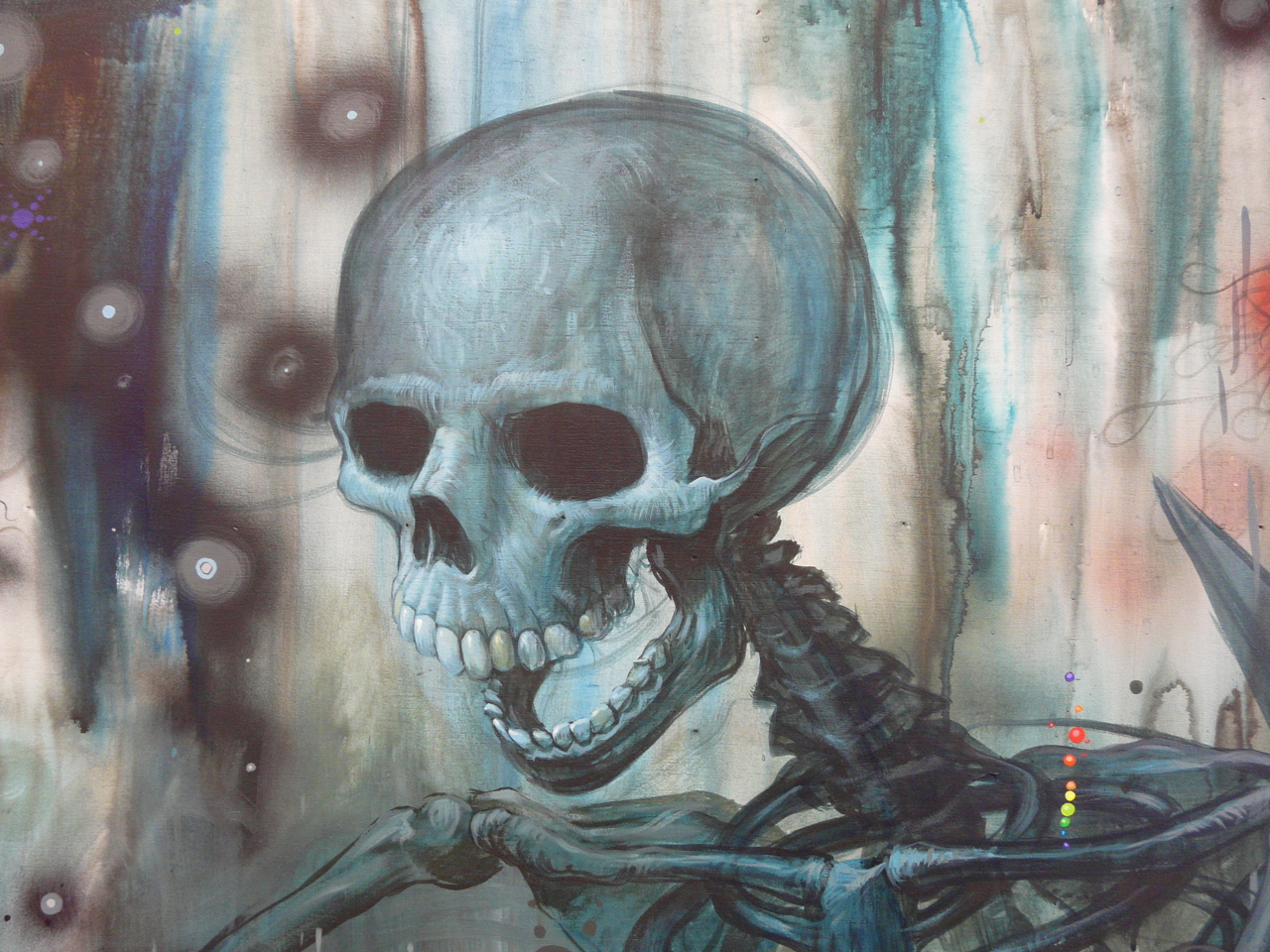 This particular painting includes many of the thematic elements that Soto has been working on for this show – the skeletons, skulls, knives, and ofÂ course theÂ ubiquitous Soto Fish (heads with the pointed ears – of which he is making into one of his large installations). Jeff relates that he started painting this during the worse part of the recent collapse of the stock market and included “GEMCO,” a now defunct chain of discount membership stores. 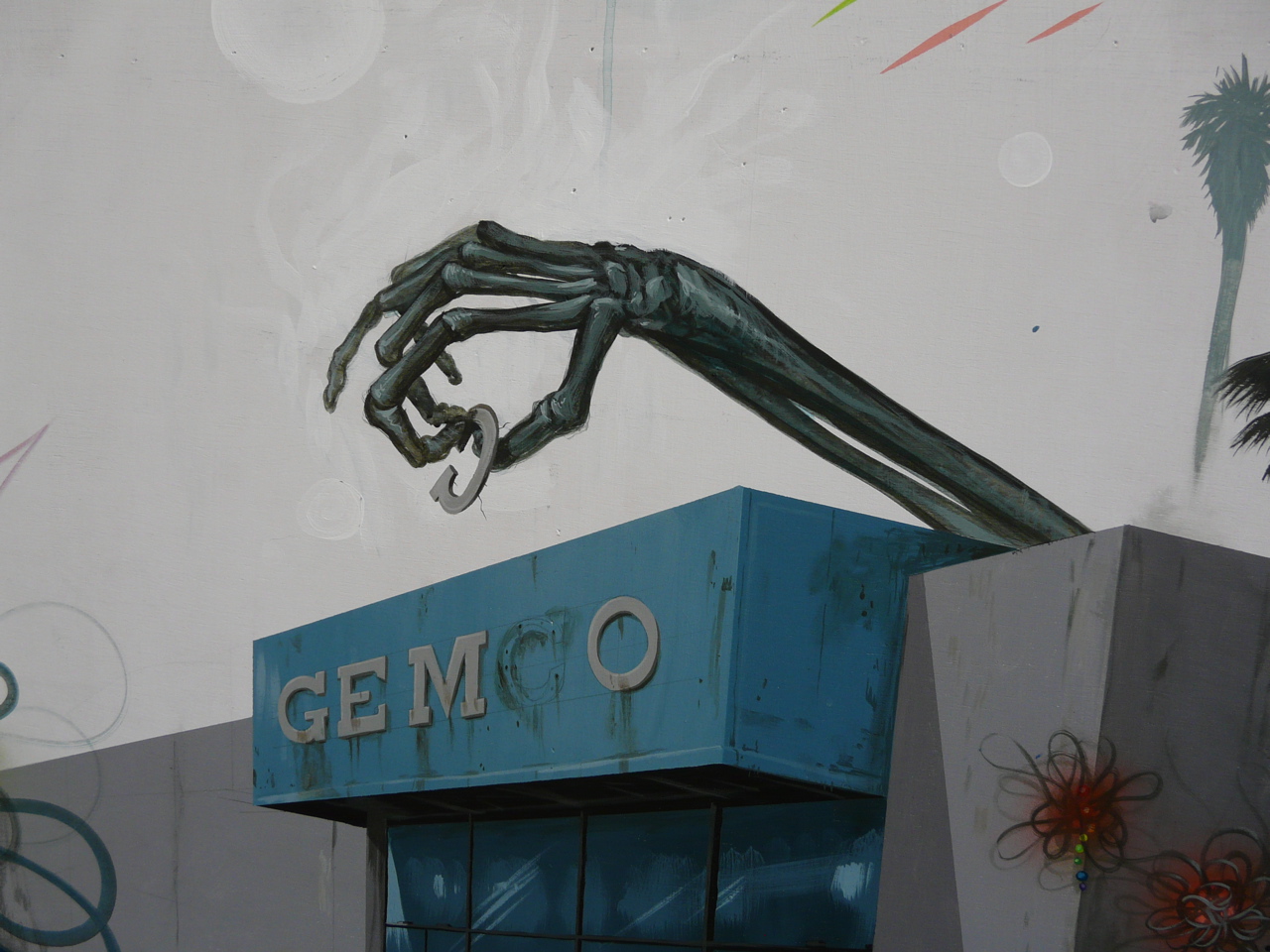 Arrested Motion is very excited about this exhibit opening in December a week after Art Basel. We will be providing continuing coverage and insight in the coming weeks.