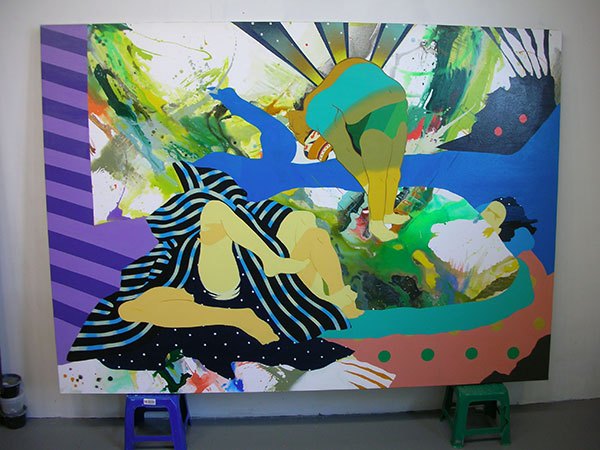 Talented Brooklyn-based artist Tomokazu Matsuyama, AKA Matzu, combines Western urban art and graphic design within a tradition Japanese art historical context, creating an amalgam that is beautiful and unique. Arrested Motion recently had the pleasure of visiting Matzu’s studio, to check out some of his recent work and to chat.

Interview after the jump. 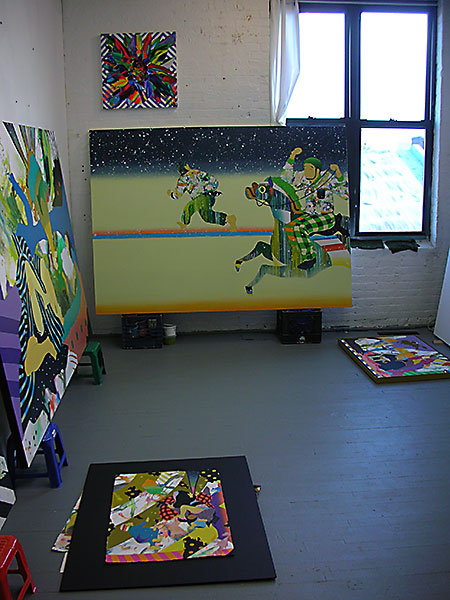 Arrested Motion: You grew up both in Japan and the United States. Do you feel your work is received differently in one than in the other?

Tomokazu Matsuyama: Itâ€™s interesting because my work is often categorized in two different manners: the graphical animal figures, and the figurative abstract works, created by appropriating traditional Japanese iconography such as woodblock prints ‘UKIYO-E.’ Japanese people seem to prefer the animal ones, probably because compared with the latter, the viewers feel that they are a little too much of themselves. Whereas here in the States, or in other parts of the world, the viewer finds a good balance between East and West, ornamental and conceptual, graphical and painterly and figurative yet abstract. They donâ€™t just pick up on the traditional Japanese woodblock print look of my work. Which is great because if my images could lead the viewer translates what an image means at the day and age we live, thatâ€™s an achievement. 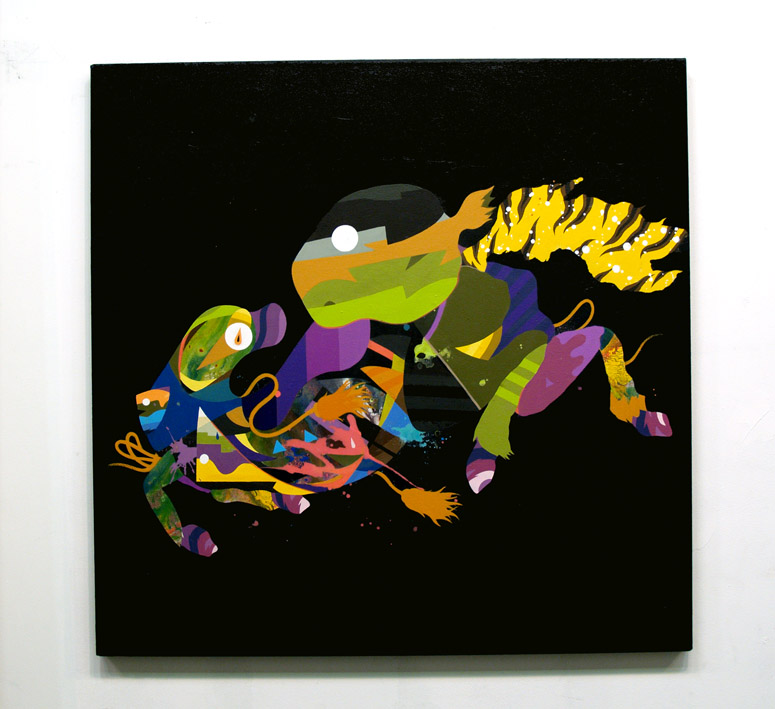 AM: In Japan, is your imagery instantly recognizable to people who know Japanese art history?

Matzu: More in general, as I mentioned because I am appropriating existing Japanese woodblock prints. Originally, they were posters for a play, a portrait of a beautiful woman, scenery and erotic scenes. Itâ€™s common imagery that everyone knows in Japan. Itâ€™s really casual art. You donâ€™t necessarily have to be an academic or have a learning standpoint to understand it. Thatâ€™s why, in a way, itâ€™s a little bit too close or familiar for them. But at the same time, I find it interesting to use what we are all accustomed to, and create a new and contemporary image. Communicate internationally using a domestic language. 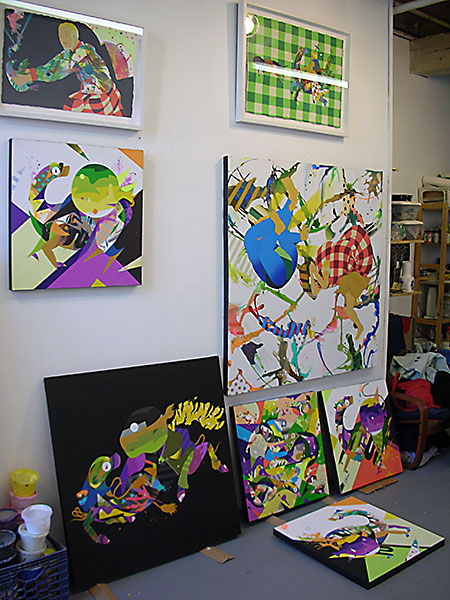 AM: In the intro to your book, the author writes that each of the animals has a traditional meaningâ€¦

AM: And Japanese people recognize those meanings in your work?

Matzu: I donâ€™t think so. Theyâ€™re understated messages I add to my work so my work will be more than just interesting imagery. By adding a meaning, it gives me motivation to keep creating. Itâ€™s not so difficult to create new and interesting images, but what is difficult is creating work that has a meaning within the history of art. Like any artist, itâ€™s my dream to have the work exist over centuries.

Anyways, these works have a certain austerity to them. Every animal in Asian painting is symbolic and has a specific meaning. It possesses a metaphorical message. For example, thereâ€™s a famous image of a koi going up a waterfall. Once up the falls, the fish will become a dragon, which symbolizes a desire for success. These messages were a local language from different parts of the world long ago. And by adding Western sensibility, such as Disney-esque animation color tones and an element of graphic design, I make my images to be like a kaleidoscope of bits of different cultures, making an organic collision of many different aesthetics. I do this to portray the place we live, and who we are, since weâ€™re nothing but hybrid. 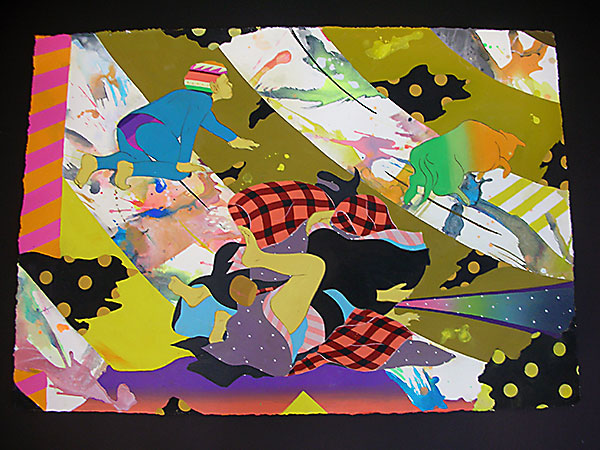 AM: You were a professional snowboarderâ€¦

Matzu: Yeah, back in the day.

AM: And you had an injury, and then got into art. How did you make that transition?

Matzu: There really was no transition. I was doing this all at the same time. It was a natural thing for me to express myself. Skateboarding and snowboarding has a unique way of expressing yourself and thatâ€™s what got me into it. And that relates to art. All I use is pigment and water, like any other painter. But what comes out is totally different. Just like every skateboarder looks different regardless of riding on a same board. So, theyâ€™re relatively close.

I was one of those kids that liked to draw. I always drew. I was doing art and sports. But then, I got injured and couldnâ€™t walk for 10 months. And I thought to myself that I could possibly challenge snowboarding for the next 10 years, but if I decide to focus on artâ€”I was only 23â€”I could do it until I died. That got me to focus on just art. 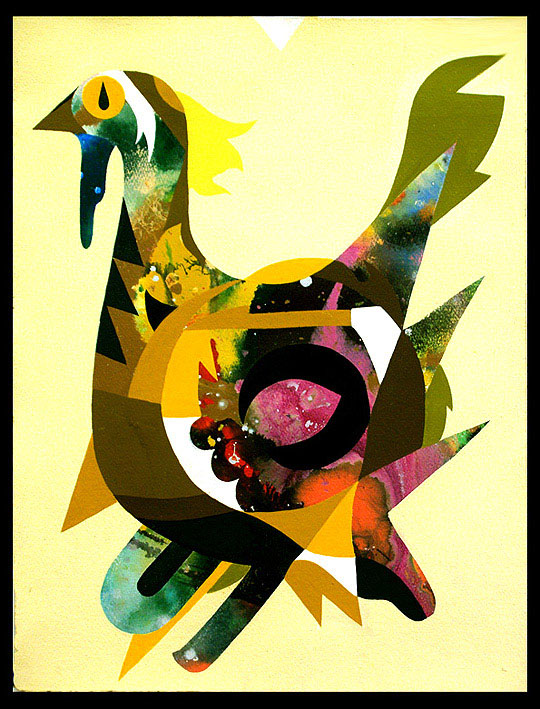 AM: Was your family supportive of that transition?

Matzu: Yeah, they were. Because my mother actually was in theater right after [World War II]. And it was very rare to study abroad. But when I mentioned the plan to leave Japan, she was extremely happy. My family was the biggest supporter, and thatâ€™s why Iâ€™m here today.

AM: Your parents still live in Japan?

AM: So you were only in the United States as a child?

Matzu: Exactly. I was brought up in a very old town in Japan. Like Kyoto, it was full of Japanese traditional art. And then, at the age of 8, I came to Los Angeles, where I was forced in a new very young culture. Exposed to surfing, that type. That was a big shock. I was only here for a few years, but I was so young, I got used to it quickly. So, by the time I went back, I was a full-on West Coast kid. But then I went back, and became Japanese again. 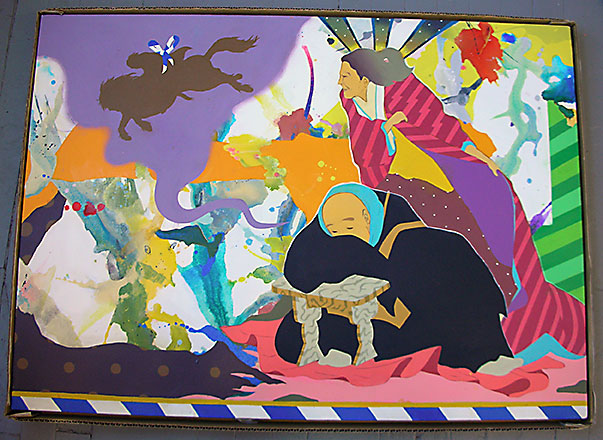 AM: In the intro to your book, the author describes you as â€œstreet-art inspiredâ€ or â€œurban inspired,â€ but did you ever really do street art?

Matzu: No. Thatâ€™s the thing. People just kind of categorize me with street art. Or is it that viewers like to determine it as casual art?

AM: Yeah. I think thereâ€™s this cyclical trend. In the 80s, in New York, street art was hot for a little while with Haring and Basquiat…

Matzu: Basquiat and Warhol are big influenced to me. If I were to define what street art is to me, I think itâ€™s accessible. By which I mean that I want to have my work react to every race, age and gender. Like Takashi Murakami, Jeff Koons or Damien Hirst. At the same time, my work is based in an art historical backgroundâ€”it has a somewhat academic side to it. But I donâ€™t want it to be too much like that, where unless you read the press release you donâ€™t know what the work is saying. Thatâ€™s not where I want to go. I am interested in communicating, because thatâ€™s what art has to do. And that is my biggest struggleâ€”to set my balance in the right place and find where I can land. 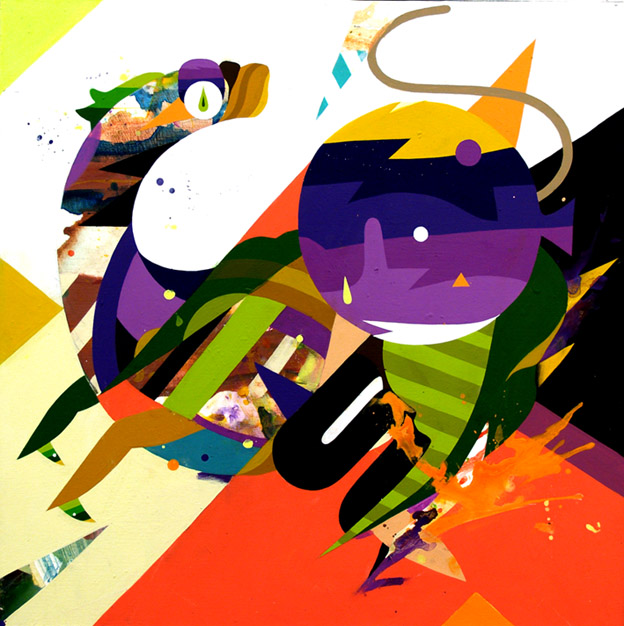 AM: I just noticed last week that the mural that you did on Bedford Avenue in Williamsburgâ€¦

AM: Yeah, for the most part, itâ€™s gone. I think the monkey is still there. And I was wonderingâ€¦I think street artists recognize that that the stuff isnâ€™t going to last. But because you arenâ€™t a street artist, how do you feel that that piece is no longer there.

Matzu: It would have been nice if it had been there longer, but from the get go, I knew that it would be gone at some point. But regardless, painting is ephemeral. It dies after a while. Or it gets lost or it gets burnt or it gets buried. So, it did its function. I wanted to communicate in my artist community and it worked well. But I hoped it would be there a little longer.

AM: I thought it was a shame, because it was a great piece. I would take people who would come to visit to see it.

Matzu: I have to try to do it again somewhere. Something that large. 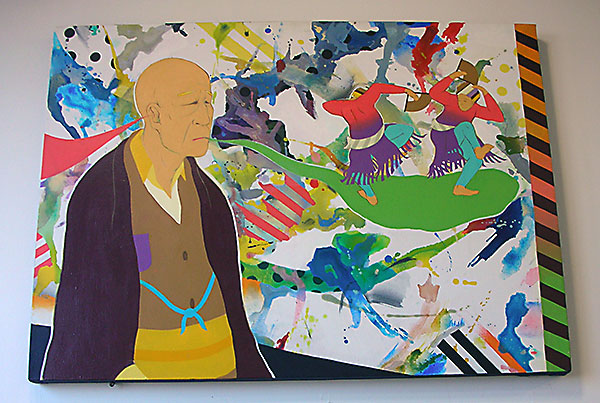 AM: So, what do you have coming up?

Matzu: I am showing at one of the fairs in Miami, Scope. And in December, I will be having a show at Frey Norris, with few other artists. And then, in March, Iâ€™m doing a solo show at Joshua Liner Gallery.

AM: And for you show with Liner, youâ€™re going to be doing the whole gallery, right?

Matzu: Yeah, it will be his first time actually trying out one artist doing the whole space. My goal with solo shows is to go beyond pigment on a square shape. I donâ€™t know how far I can go. Itâ€™s always a challenge. Iâ€™ll do my best.

AM: You have an instillation or something planned?

Matzu: Still brainstorming. I am thinking of doing something that is more gestural than painting.

AM: Well, we look forward to it. Thanks.