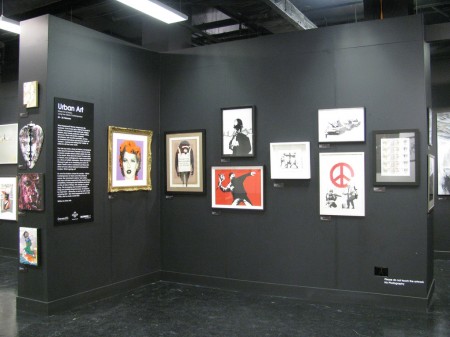 In a matter of hours, Dreweatts will hold their first “Urban Art” auction of the year, being hosted at the Ultralounge within the London flagship location of Selfridges. The auction features some great pieces by a strong mix of urban artists including: Adam Neate, Banksy, Bast, Beejoir, Faile, Judith Supine, Nick Walker and Pure Evil.

Connoisseurs are keeping a particularly close eye on two original works by Banksy, â€œNo Ball Gamesâ€ and â€œGo Flock Yourself,â€ (announced) which carry estimates of Â£30,000-60,000 and Â£40,000-60,000, respectively. This auction opens on the heels of a dismal urban art auction held by Bonhams no more than 48 hours ago, where about 40% of the lots did not sell and 35% of the Banksy pieces went unsold including notable works like theÂ “Kate Moss” six-screenprint set, “Nola Pink,” “Girl and Balloon” diptych, and “Keep it Real” monkey canvas.

If the Dreweatts results are anything like what we saw at Bonhams, buyers will be clamoring around the rare Banksy screenprints and focus their attention and funds on lower priced original pieces from lesser-known artists who are priced at a major discount compared to a year ago. The upper end of the market, it seems, has simply fallen off and Banksy’s meteoric rise in prices is now being quelled with a lesson in gravity and the reckoning nature of the Earth’s atmosphere.

See all of the photos from the pre-auction viewing after the jump.