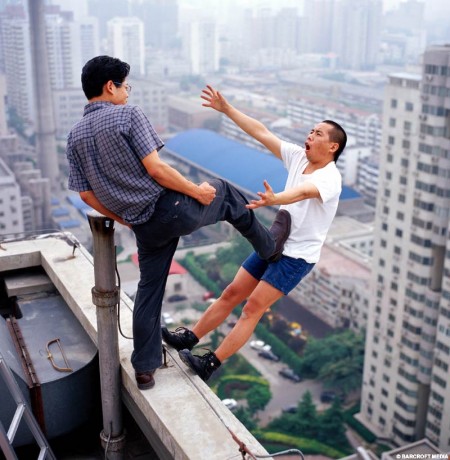 As AM reported in past months (here), the ailing financial situation has forced many notable galleries in the US and EU to close shop. While this disappointing trend in the western art markets concern many, it pales in comparison to the crisis that is currently plaguing China’s contemporary art market. In Beijing’s famed Dashanzi art quarter alone, over 50 galleries have gone out of business. Even the annual Asian International Art Fair scheduled for March 11-15 at New York’s Park Avenue Armory, has been canceled due to the many Chinese galleries pulling out.

China’s once red-hot contemporary market has seen unprecedented growth over the past 5 years; ballooning from 3 million in 2004 to 194 million in 2008 which accounts for 25% of the world. (Sotheby’s Evelyn Liu) Even young artists still in school were selling paintings for upwards of $100k. Many market insiders have commented that artists were catering their styles to worn-out Cultural Revolution imagery and pop art motifs in an attempt to establish commercial value.  Now that these market trends have lost their novelty, many are expecting that this contraction will stabilize the market and force galleries to become less commercial and more experimental.

With approximately 40% of all Asian contemporary lots going unsold in auctions since the early fall of 2008, does this mean the end of the art market in Asia? Likely not. While many mediocre pieces went unsold due to its inflated nature, the high end gems are still keeping their value or exceeding estimates. As with all down markets, many see this as a time to buy low, as quality works are still in relatively high demand. While the economic uncertainty drives out many speculators and gives China’s once booming contemporary market a much needed breather to adjust itself, this market correction can lead to a healthier art market emerging from this crisis.

Here’s a great video from France 24: