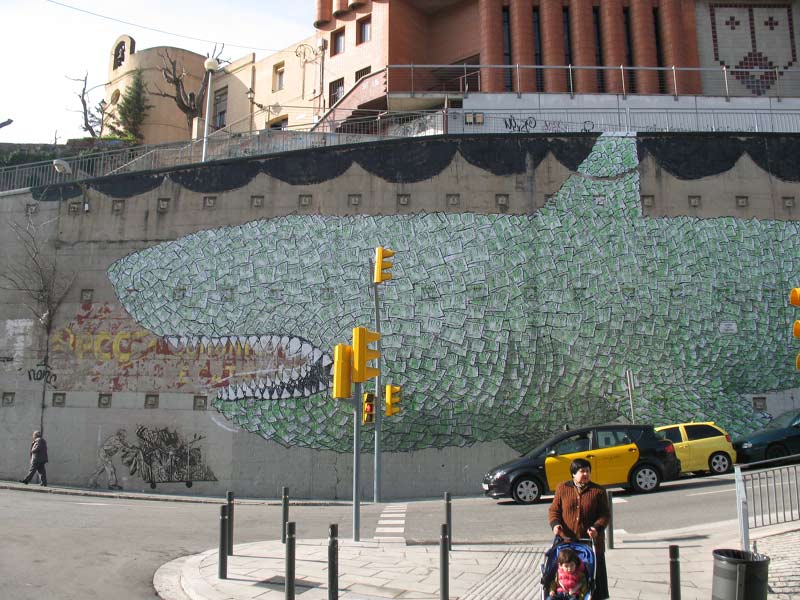 Italian street artist extraordinaire Blu recently was invited to speak in Barcelona at the fifth annual “Influencers” festival hosted by the Center of Contemporary Culture (CCCB).Â  He was also commissioned to put up this fantastic mural of a giant shark made of money devouring old painted slogans as well as bearing down on a Swoon wheatpaste (although we are not sure if this was a collaboration).

Blu’s presentation (video here – knowing Spanish/Italian may be helpful) was well received, as well as comical as he appeared in disguise (wig and all – groucho marx style).Â  Excerpts from the entertaining talk (via Flavorwire) include: â€Why the wig?Â Three reasons.Â One, You can be a drug trafficker, or a criminal, but the worst is to be a painter of walls.Â Two, itâ€™s cool, well, fairly cool.Â Three, itâ€™s almost carnival, so thatâ€™s why the wig.â€Â  Check out more insights here.

For those interested, it appears that Blu is slowly putting in-progress pics of this mural up on his blog.Â  Take a look at these as well as some more detailed pics after the jump.