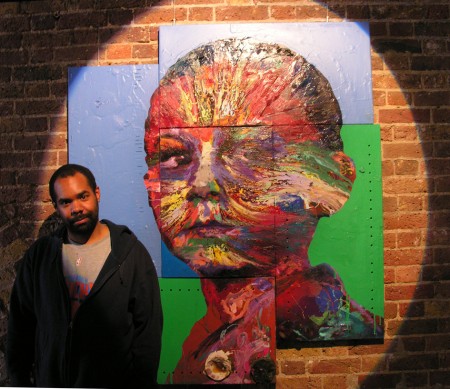 Matt Small’s long awaited solo show “Youngstarrs” opens at Black Rat Press on Friday, March 27th. Small has developed a unique style of portrait painting which he uses to acknowledge and passionately celebrate individuals on the outskirts of society who are typically ignored or routinely demonized by the media through no fault of their own. Small’s following has been building for some time and this show features a new body of work on salvaged metal and concrete as well as some canvas pieces – definitely a show not to miss.

AM was fortunate enough to interview Small and get some exclusive images of the show as well as a peek of him at work in his studio. Check it all out after the jump. 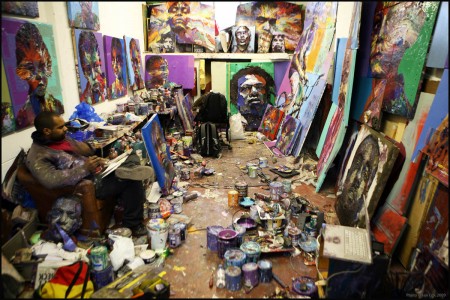 Arrested Motion (AM): This is your first solo show with Black Rat Press (BRP). How have the preparations been going?

Matt Small (MS): Yeah, I’ve been with BRP for a little while now but this is my time to shine! I’m looking forward to the response and seeing what people think of the work. I’m always passionate about what I do and its been about six to seven months of working away. Like any exhibition you work hard and its all about that work going up. It’s meant to be seen and it’s important that I get to say what I want to say. The idea of my work is that I paint these people that you don’t really acknowledge or notice as worthwhile and as many people as possible see them. You depict them and pluck them from obscurity – I like the idea that everyone is beautiful and everyone is deserving of some attention. My hope is that people see these individuals that they’d pass by on the streets in spaces like this where you wouldn’t normally see them. For me it feels like a privilege that I can do this and show this subject matter. I’d like to think that after coming to the show if you actually saw one of these people on the street you might question any preconception that there’s no hope for them. 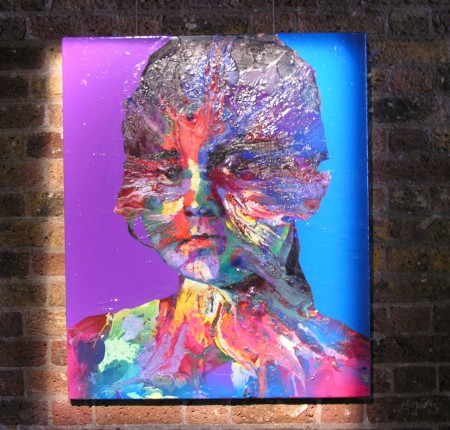 AM: Your subjects tend to be young black boys and other young people on the edge of mainstream society, but how do you choose the individuals involved?

MS: I film people without them knowing with a video camera. It’s an interesting way of doing things and I bypass so many traditional ways of doing portraiture like sittings in studios over a few sessions. We’re in CCTV city and we’re all being filmed and I like the idea of being out among the people and being able to zoom in on that individual. It’s also the idea of plucking somebody out of obscurity. We all see thousands of faces everyday but at the same time, we don’t really see anyone. We don’t ever take time to appreciate that other individual and wonder what their story is and history and that for me is a really nice thing to be able to do. I don’t tend to have a personal relationship with them. When I go back to the studio I get the photo in front of me and I can make up my own interpretation of their possible lives. That might be that they’re going off to college to become a lawyer or whatever and I don’t have to believe the Daily Mail or whatever and think that they’re out mugging old ladies. Why can’t we have anything more positive and hopeful? 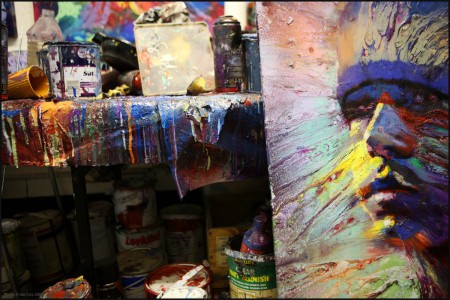 MS: With the people I focus on if I say, “Do you want to come back to my house and do a few sittings?” it’s not going to happen and it’s not going to work. You’re dealing with people who have their lives to live and the way I work also bypasses the staged feel of sittings. When you film them it’s more authentic, you get people in their environment where they’re natural and I’ve got a million options and opportunities to find what I’m looking for. I like the idea of not doing it the same way as everybody else. 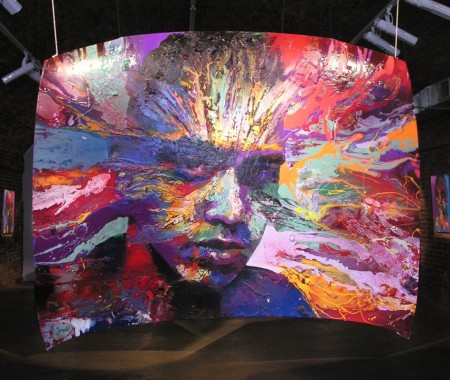 AM: What’s the reaction of your subjects if and when they see the paintings?

MS: Some of these guys find out and know that I want to get them down to see the work. When they do come down it’s always a pleasant thing for them to witness themselves in a space like this – you see a sense of pride and worth and its always fascinating to see. But it’s also tricky, as these guys wouldn’t ever normally come into galleries. I do like the idea of people knowing there’s a picture of them but at the same time it doesn’t always work like that. It’s more about the fact that somebody has taken the time and effort to record and beautify the individual and immortalize them. Why shouldn’t they be immortalized? I’m not looking at celebrities. It’s almost a reaction against celebrity. We’re all worthwhile and celebrity makes us forget the person on the street is as valuable as everyone else. I appreciate everyone around me and I’m not about to get down and kiss the feet of David Beckham or paint Obama who hasn’t even done anything yet! 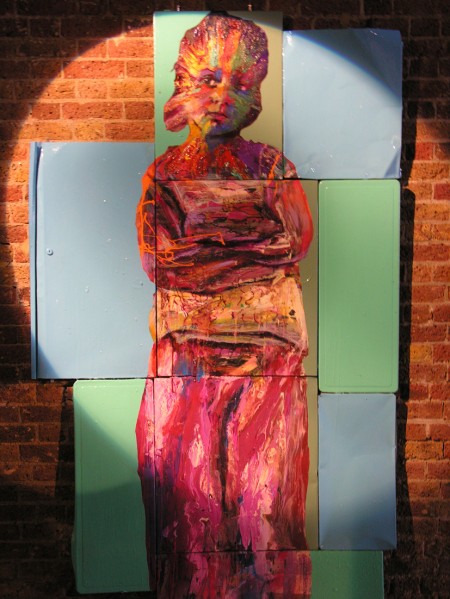 AM: Do you feel like you identify with your subjects more due to the your experiences growing up?

MS: I suppose so. I’m a single parent from mixed race and could well have been identified as a problem as a kid. I think it’s important to realize that when you come from these seemingly dark environments, it doesn’t necessarily dictate your outcome – you are capable of amazing things and you are all different. This is my world and I want to show it and reinterpret it in a unique way. That’s the gift of being an artist and the best art is the art that’s most real and part of the artists’ eye. It’s important to see my world as it doesn’t always get looked at. Why not have an estate in Kentish town or Camden in a painting? People should be able to see that their world has been included. 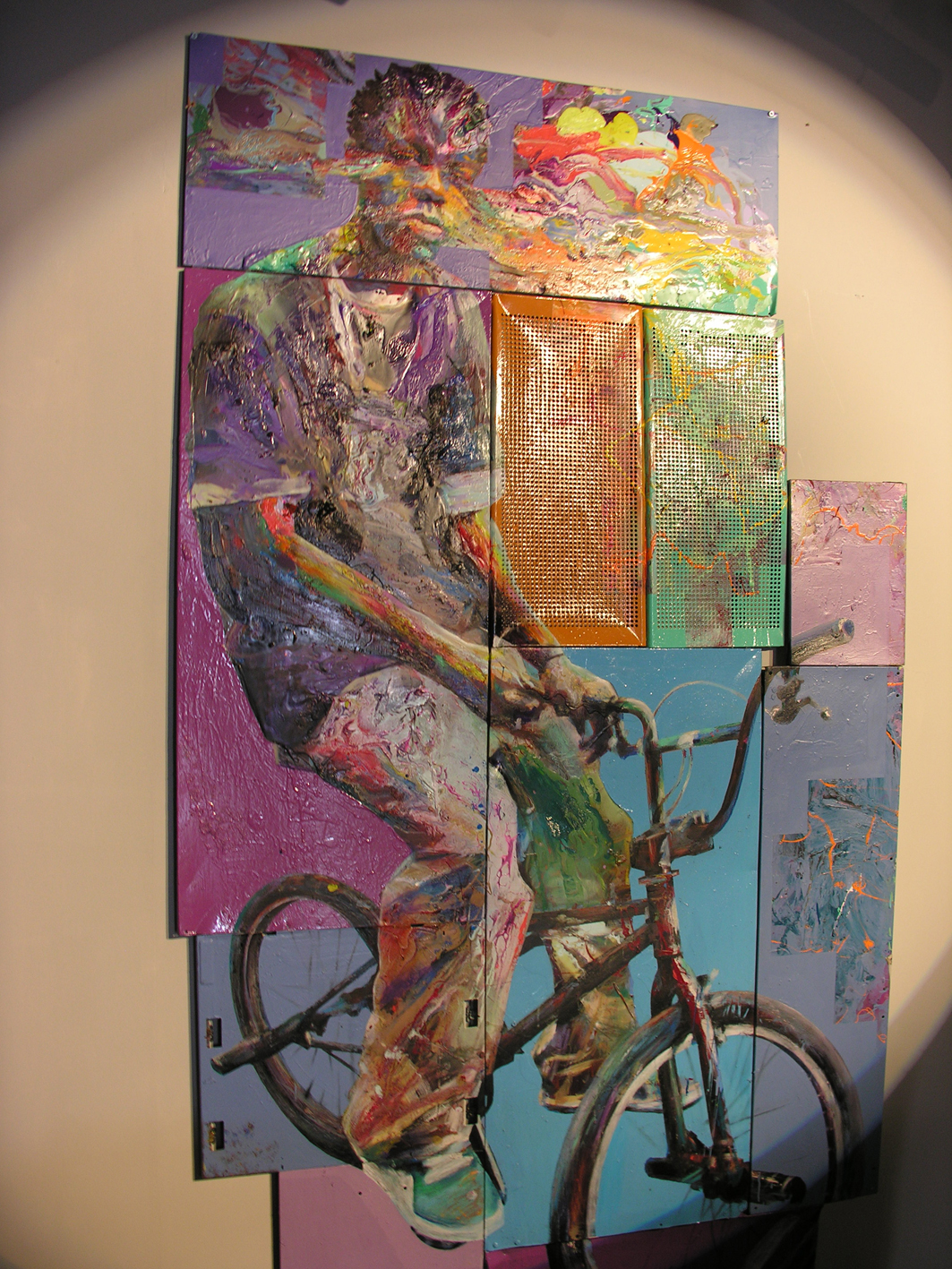 AM: Do you feel that your work in the community encourages others around you to do something similar?

MS: There’s no point in me babbling on about it, but when I started I thought it was important to start doing workshops and projects and get people and youngsters down and put their work amongst the pieces. It’s a simple thing but immediately people’s sense of worth and power increases as they realize they’re just as entitled to create as anyone. A gallery doesn’t have to be a closed shop and there are things that are accessible to all. I don’t see enough art about my world and that’s why its important to continue. There’s a whole lot of music that talks about it, but art or television turns away from my reality. It frustrates me that what is shown in these mediums is often negative. This is about celebrating the individual through the work and emblazoning them with colors.

AM: There seems to have been a change in your painting technique with this body of work. Can you tell us more about this?

MS: I think there’s been a move on. There’s a lot more play with paint and I love to muck about and experiment – that’s what keeps it interesting and the materials I work on are part of it. Splashing the crap out of something with paint is part of what I do and it’s fun, though I’ll never master it. You know it takes a lot of time to develop a way of work that’s your own voice and I’m developing around it – with concrete work, painting and sculptural pieces. The themes that I want to pursue remain and I work around the subject matter – it’s the themes that dictate where things go. 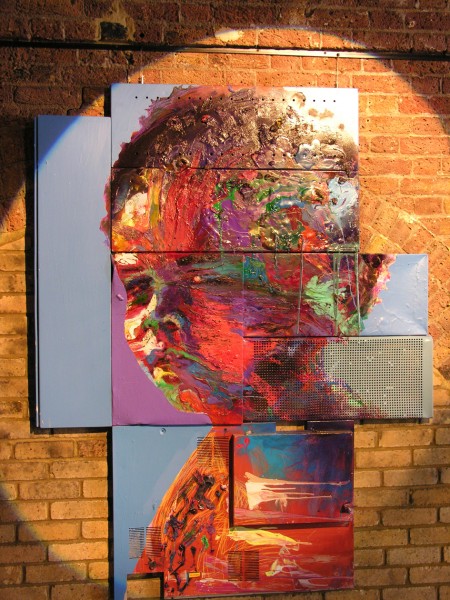 AM: Do you feel like it’s getting worse for young people at the moment?

MS: We’re in a recession now and I wouldn’t want to be a young person graduating from school now. It’s going to be daunting and there’s going to be a lot of young people thinking, “How am I going to make it in my world?” I still think there are opportunities and there’s the potential in everyone and I don’t want to think that because my environment looks dark that’s the only way my life is going to be. Let’s hope the kids can focus on the positive and think, “I’m going to get out of this.” I’ve got a seven year old son and that’s what has made me look at life in a more positive way. I don’t want to assume his mates are all going to be on the scrap heap in ten years time. I’m not going to do that. There’s hope. There’s a chance and there’s a future.

With my paintings you might look at a face and feel fear in them, but then you look again and see past that initial gaze and even though that kid might be growing up in a rough estate you can’t write them off and assume their life is going to be dark. You’ve got to focus on the positives so the kids come out of it with a continued sense of belief. 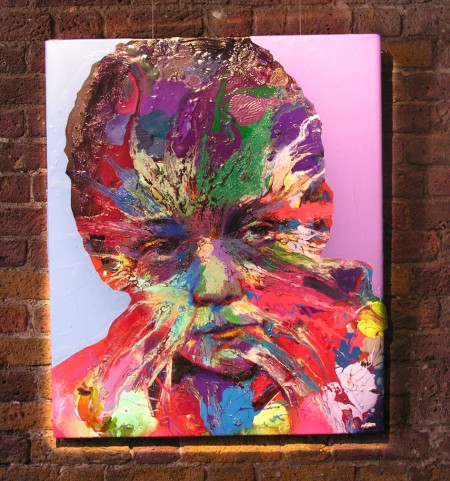 AM: Did your work evolve when you had your son?

MS: Before I had a kid I was basically miserable – it was stark reality based work. I think that needs to come out and the comment made. I still see it, but now I focus on the potential. I see the community and I see people getting on. I see a community that’s got potential to thrive. Leave the Daily Mail on the shelf and leave the politicians to make annoying statistical comments and live. Keep moving forward – that for me is the underlying message. I want to see a brighter world but I know that it’s tough.

AM: How does your son feel about your work?

MS: He doesn’t like it! He’s like, “Why do you paint faces all the time? Why can’t you paint some robots some time? What you going to do next?”

MS: Maybe robots. I love them! I studied illustration and love science fiction, so if I get fed up with this, it’s an option!

AM: Thanks for your time.