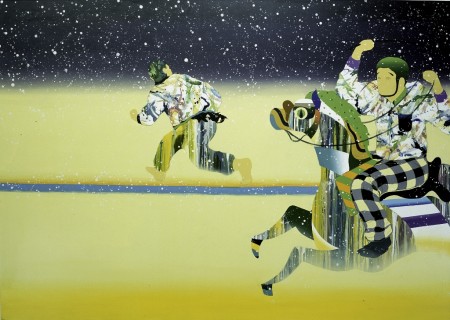 It seems like Matsu’s aÂ thoroughbred that keeps outpacingÂ the competition.Â KeepingÂ the momentum from hisÂ stunning solo at Joshua Liner Gallery (covered); Tomokazu (Matsu)Â Matsuyamaâ€™s “Runnin II” was named one of the top ten pieces in this this year’s Art Dubai by Emirates Business. The piece was represented by Frey Norris, where he sold out his previous show (covered).Â  Matsu’s beautifulÂ work was recognized as one of the gems of this year’s monster show in the ever growing UAB. And despite the gloomy perceptions about the overall world economy, it appears that itÂ has not dampened theÂ attitude of art lovers in the Middle East.Â Art Dubai has seen an increase in registration by 20% over the previous year. It seems that US artists which are willing to travel are reaping the benefits. Recently,Â notables such as Phil Frost, Stash, and Futura have also ventured out to the United Emirates in an effort to broaden their audience.

Runnin II was a continuation of Matsu’s signature “Runnin” series, of which a giant 12Â x 6 feetÂ mural:Â “Runnin Deep”Â isÂ currently on display at Joshua Liner Gallery until April 4th. AM congratulates MatsuÂ on this accomplishment.