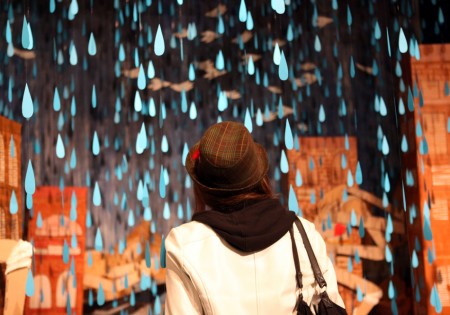 Israeli street artist Know Hope’s Los Angeles solo debut “the times won’t save you (this rain smells of memory)” (previewed) opened to a packed house at the Carmichael Gallery. Patrons were in awe with his intricate gallery installation echoing the theme of the show, which was comprised of cardboard buildings, his signature characters, paper raindrops and fishing twine. Equally as impressive was Know Hope’s latest series of works, which featured a free-form poem of sorts, with a powerful coupling of words and images of his characters in various heart-heavy situations.

Know Hope was kind enough to hand-touch and sign a few copies of his “The Anytimes” newspaper supplement for AM readers. More on how to get your hands on this and all the photos from the show after the jump…

“The Anytimes” contest:
The first three people to comment on this post will receive a copy of “The Anytimes” signed and hand-touched by Know Hope.