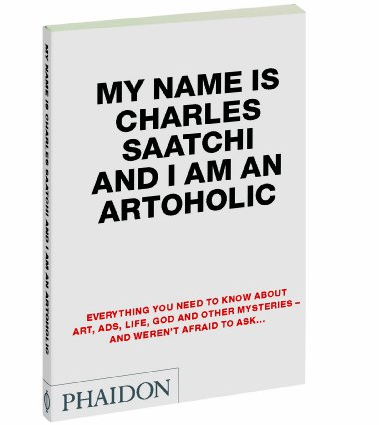 Phaidon Press recently released this intriguing title by world renowned art dealer, collector and ad man Charles Saatchi. Known for his reclusive nature, Saatchi has apparently stepped into the spotlight to answer 200 questions from journalists, art critics and members of the public, all with unabashed honesty.

An excerpt of ten question after the jump.

You’ve been successful at discovering new artistic talent. But are there not always great artists who go undiscovered?

By and large, talent is in such short supply that mediocrity can be taken for brilliance rather more than genius can go undiscovered.

You have been described both as a “super-collector” and as “the most successful art dealer of our times.” Looking back on the past 20 years, how would you characterize your activities?

Who cares what I’m described as? Art collectors are pretty insignificant in the scheme of things. What matters and survives is the art. I buy art that I like. I buy it to show it off in exhibitions. Then, if I feel like it, I sell it and buy more art. As I have been doing this for 30 years, I think most people in the art world get the idea by now. It doesn’t mean I’ve changed my mind about the art that I end up selling. It just means that I don’t want to hoard everything for ever.

Your practice of buying emerging artists’ work has proved highly contagious and is arguably the single greatest influence on the current market because so many others, both veteran collectors and new investors, are following your lead, vying to snap up the work of young, relatively unknown artists. Do you accept that you are responsible for much of the speculative nature of the contemporary art market?

Do you think you have messed up anybody’s life by flogging off all their work?

I don’t buy art just to make artists happy any more than I want to make them sad if I sell their work. Don’t you think you’re being a bit melodramatic?

Before you went into advertising, what other career did you consider?

“Consider” isn’t quite how it was. At 17 and with two O-levels to show after a couple of attempts, a career path wasn’t realistic, nor a chat with the Christ’s College careers officer, who wouldn’t have recognized me in any event as my absenteeism record was unrivaled. I answered a situations vacant ad in the Evening Standard for a voucher clerk, pay £10 weekly. It was in a tiny advertising agency in Covent Garden, and a voucher clerk had to traipse round all the local newspaper offices in Fleet Street – of which there were hundreds at the time – and pick up back copies of papers in which the agency’s clients had an advert appearing. The voucher clerk’s role was to get the newspaper, find the ad, stick a sticker on it so the client could verify its appearance, and the agency could get paid. Vital work, obviously. One of the advantages of it being a tiny agency was that one day they got desperate when their creative department (one young man) was off sick, and they asked me if I could try and make up an ad for one of their clients, Thornber Chicks. This ad was to appear in Farmer and Stock-Breeder magazine, and hoped to persuade farmers to choose Thornbers, as their chicks would grow to provide many cheap, superior quality eggs and a fine return. I didn’t know how you wrote an ad, or indeed how to write anything much other than “I will not be late for assembly”, for which I had been provided much practice. So I looked through copies of Farmer and Stock-Breeder and Poultry World, chose some inspiring-sounding words and phrases, cobbled them together, stuck on a headline – I think I stole it from an old American advertisement – and produced “Ask the man who owns them” as a testimonial campaign featuring beaming Thornber farmers. The client bought it.

Which artists do you display in your own home? Are you constantly changing the works you have there? Is there a core of favorites which stay there?

My house is a mess, but any day now we’ll get round to hanging some of the stacks of pictures sitting on the floor.

Who are the artists you are most pleased with discovering?

Over the years I have been very lucky to see some great artists’ work just at the start of their careers, so that I could feel “pleased with discovering” them. However, I have also “discovered” countless artists who nobody but me seemed to care much for and whose careers have progressed very slowly, if at all. So I certainly don’t have an infallible gift for spotting winners. I think it’s fair to say that I bought Cindy Sherman in her first exhibition in a group show, with some of her black-and-white film stills framed together in those days as a collage of 10 images, and went on to buy much of her work for the next few years. I bought most of the work from Jeff Koons’s first exhibition in a small and now-defunct artist-run gallery in New York’s East Village, which included the basketballs floating in glass aquariums and the Hoovers and other appliances in fluorescent-lit vitrines. But this is getting too self-congratulatory and the truth is I miss out on just as many good artists as I home in on.

Are paintings a better investment than sharks in formaldehyde? The Hirst shark looks much more shriveled now than it used to, but a Peter Doig canvas will still look great in 10 years and will be much easier to restore.

There are no rules about investment. Sharks can be good. Artists’ dung can be good. Oil on canvas can be good. There’s a squad of conservators out there to look after anything an artist decides is art.

Why do overseas museums have better collections of Britart than the Tate?

Because the Tate curators didn’t know what they were looking at during the early 1990s, when even the piddliest budget would have bought you many great works. But I’m no better. I regularly find myself waking up to art I passed by or simply ignored.

Looking ahead, in 100 years’ time, how do you think British art of the early 21st century will be regarded? Who are the great artists who will pass the test of time?

General art books dated 2105 will be as brutal about editing the late 20th century as they are about almost all other centuries. Every artist other than Jackson Pollock, Andy Warhol, Donald Judd and Damien Hirst will be a footnote.

Via Curated Mag, excerpt via the Guardian.