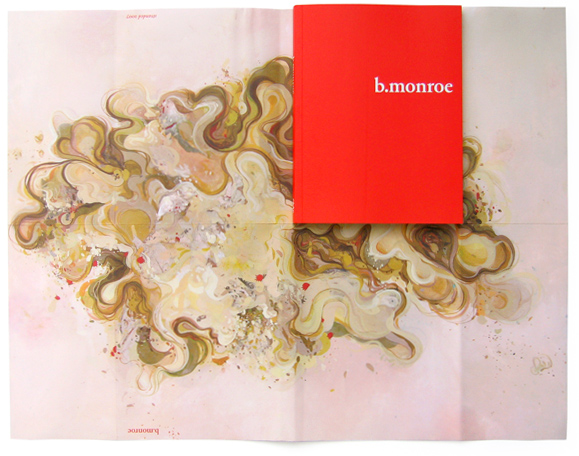 Good news for Brendan Monroe fans everywhere.Â  His new book entitled “b.monroe” has been released, and you can get yourself a signed copy if you are one of the first 30 people to order through his webstore. For those in SF, you can also get Brendan’s autograph by going to the signing and book release party on March 12th at Park Life.Â  There will also be some originals displayed there for a week in a mini show ending on the 18th.

The 7.25″ x 9.5″ 176 page softcover book will be limited to 2000 copies and is an inclusive monograph covering over 70 paintings, 15 sculptures, and installation shots.Â Â  There is also a special edition box version of the book (signed and numbered to 55) for those hardcore fans out there.Â  This will be released later and also include a screen-printed accordion zine. 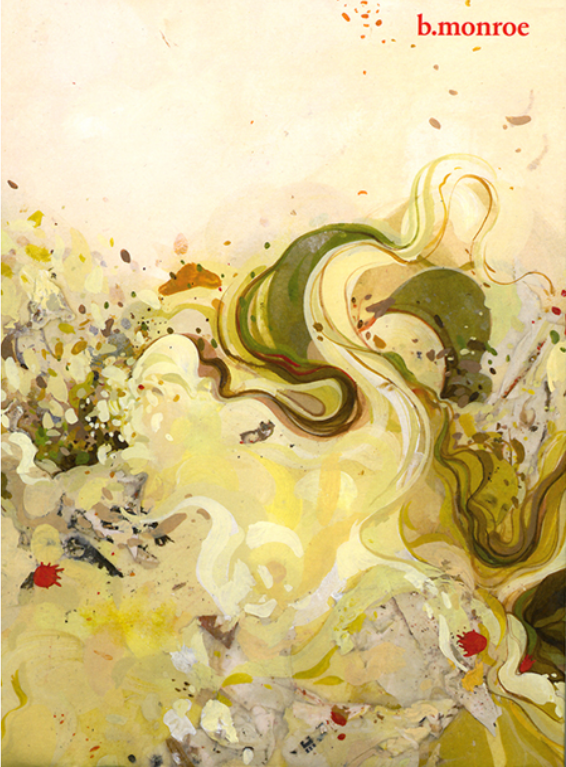 Arrested Motion (AM): Tell us a little about this book. When did you start working on it? How did it come together? Are you happy with the final product?

Brendan Monroe (BM): This book has been in the works for a while now. A couple years at least. It’s been a long process and there were lots of little hang-ups, delays and corrections along the way. I’m happy with the final product, but with that comes something more like deep satisfaction. Just to see it all in my hands and that it’s all done.Â  It’s actually here. It’s sort of like, now I can believe that my work is all collected in a book. It’s nice. 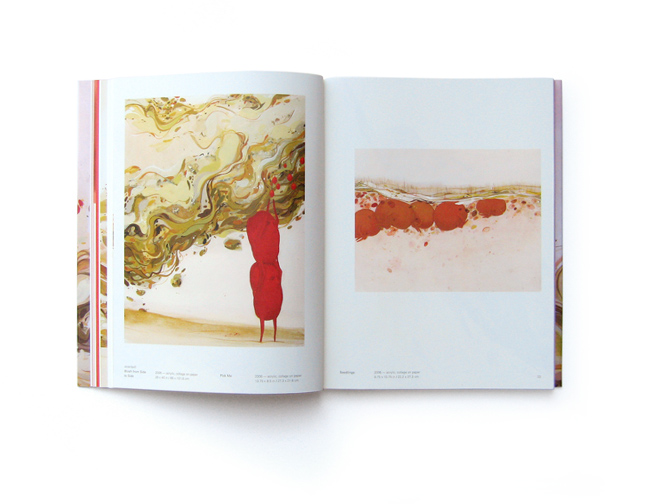 AM: You will be releasing special edition of the book including a box with an intaglio print and a screen printed accordion zine. I remember some of of my earliest “art” purchases were of some great zines you published in the past. What do you enjoy about creating them (zines) and why have you continued making them through the years?

BM: They’re so much more immediate; they’re handmade and simple. The “b.monroe” book is of course tons more work, to organize and edit. With zines, they are much more like little collections of drawings. Most of my zines are more drawing related because that’s what reproduces well with xerox. They show more from my sketchbooks and ideas that are behind the finished paintings or sculptures. I like sharing that with people, so I keep making them. 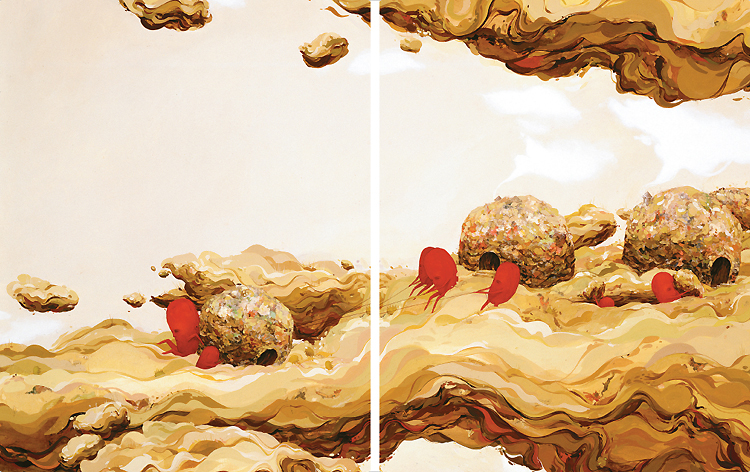 AM: Your work has often been described as “organic,” so I found it interesting that your book includes an interview conducted by a microbiologist, Simon Park. Anything you can tell us about how that came about?

BM: Simon is a guy who emailed me. He was doing some research on microbes and art and he came across my work. He offered his advice if I ever needed it. He has worked with a bunch of different artists on projects involving microorganisms. He’s the kind of person who finds his work to be really beautiful beyond his explanation, but not considering himself an artist he finds that hard to share this vision with people. So he collaborates. Here’s a link to that article. 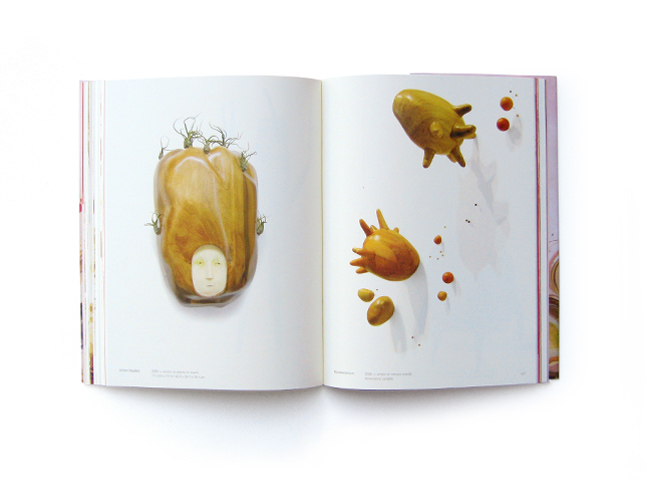 AM: Quite a few artists that we have featured on Arrested Motion in the past trained at the Art Center. How was your experience there? How has your work evolved since then?

BM: Great. They really work you to the bone. But then you come out of there ready for anything. My work has come a long way since then, it’s always evolving, growing and changing. That’s what keeps me interested in what I’m doing, giving myself constant new challenges. Sitting in one place is not so good for me. If you look at my work from 5 years ago, I was drawing a lot more animals and trees. Over time, I’ve gotten more interested in smaller and smaller living things until I arrived at where I am now. My work also was much more rigid and flat. I think someone unfamiliar with my work might not connect my old stuff with my new stuff, unless you showed them everything in between. 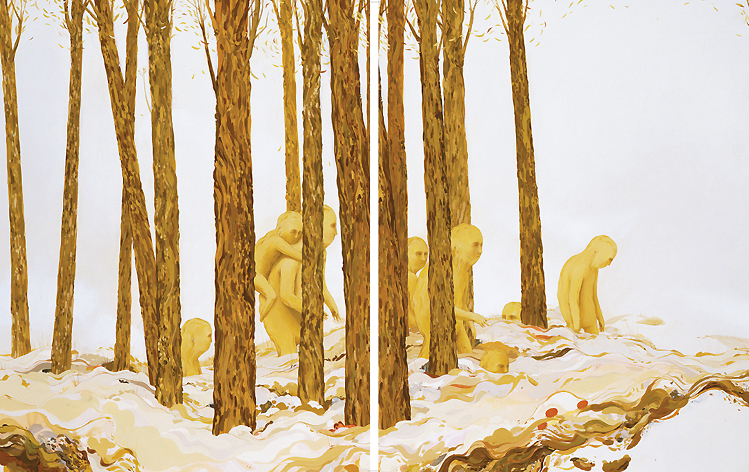 AM: We’ve noticed your paintings and sculptures have gradually become more abstract and less character-based. A natural progression or by design? Or are we completely off base?

BM: Just natural. I don’t really do anything I don’t want to do. The worst thing for me is to force myself to make a certain thing. That turns art making into labor, the kind you don’t want to do. You are exactly right, I’ve been painting less character-based stuff lately because I haven’t been so interested in that lately. What does interest me now is showing and bringing life to things or organisms that don’t necessarily have animal features – like eye and mouths. 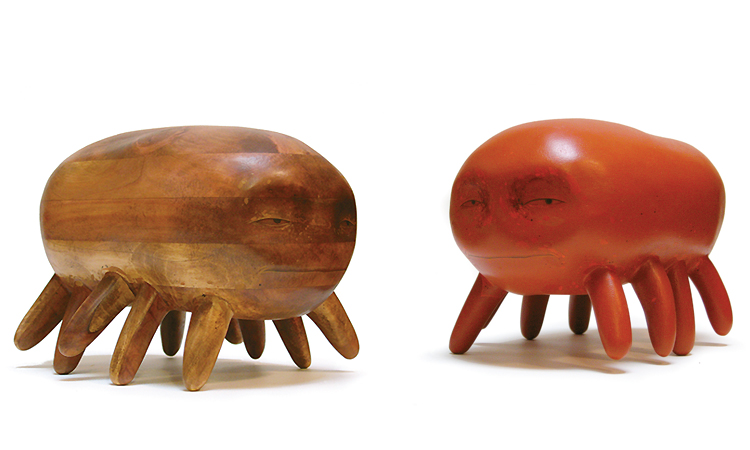 AM: Any upcoming shows or projects you can share with us for the rest of 2009?

BM: It’s kinda up in the air right now. I couldn’t tell you with any certainty.

AM: Thanks for your time Brendan.Â  Good luck with the book release and show.