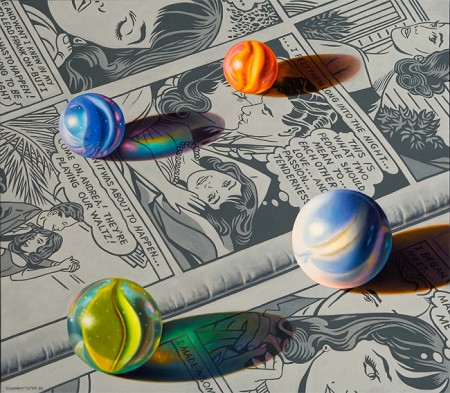 An artist that caught our eyes, Glennray Tutor, sat down with us for a session of questions and answers recently. Tutor, who is based in Mississippi, touches on subjects such as his popular “marbles and comics” series, his work in the context of photorealism, and legacy of William Faulkner who coincidentally lived in the same town and whose quote we derived the name of our website from.

Take a look at the full interview after the jump… 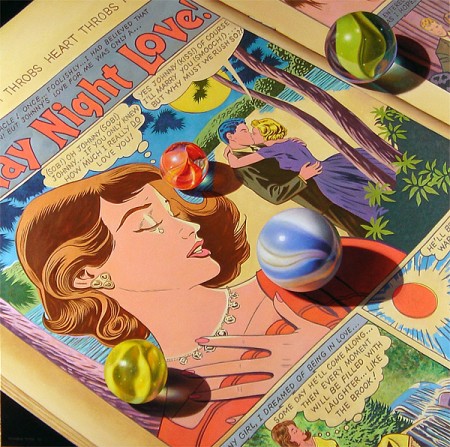 Arrested Motion (AM):  Can you tell our readers a little about your background and your art?

Glennray Tutor (GT): My background: I grew up in southeast Missouri in a small town surrounded by flat, delta farmland, an ostensibly plain place. However, I found my environment to be a wonderland, filled with marvels. I was fortunate to have parents who possessed a similar sense of wonder and nurtured my fascination with living.

My art: As I grew so did my awareness of being an artist. I think that among the  incentives for making art, along with wanting to entertain, is a desire to leave evidence that I was here, that I felt, that I was part of this miracle of existence. I realized this at a young age, and began to train myself to utilize the tools and processes necessary for making art, which are: a complete dedication to one’s art, self discipline, a strict working regime, self-confidence and perseverance. 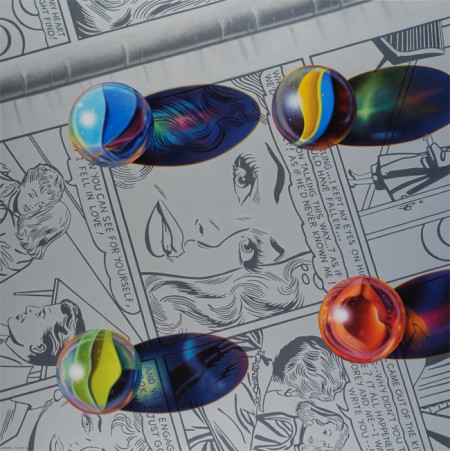 AM: What initially caught our eye were the amazing paintings in your recent series involving marbles and comics. How did you come up with the idea and what were your thoughts behind using such imagery?

GT: Thank you for the compliment.

The idea for my comic book series comes directly from my experiences, all the way from childhood to the present day. I’m usually categorized as a Photorealist, a term of classification that I do not disapprove of because my work does share some of the characteristics associated with that style. At the same time I’m well aware that many of my artistic concerns differ from the traditional tenets of Photorealism. Other artists have painted marbles (Thiebaud, I believe, was the first.) and comics (Lichtenstein with his paintings in the 60s). The difference between us is that these artists concentrated on the objects as objects, static, unaccompanied on the canvas. What I’m doing in a painting is presenting an object arranged with other objects so that an interplay of the visual, emotional, and intellectual occurs, similar to the way notes and chords function in a musical composition. For example, in any one painting of mine, instead of singularly celebrating the visual attributes of an object, I’m also, orchestrally, dealing with ideas that I find alluring, such as: human communication and relationship, time, parallel universes, narrative, differences between childhood and adulthood, cosmic and quantum physics, abstraction and realism. I don’t believe there are such things as flatness or illusion in a painting, so I’m also addressing this. 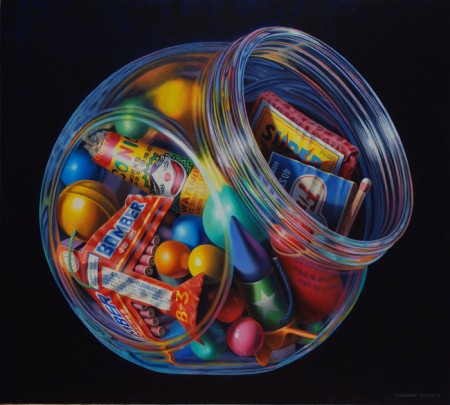 AM: Many of your paintings involve clusters of items such as toys, dolls, glass jars, fireworks, among other things. Are you much of a collector? It seems like you have an awful lot of subject matter lying around or perhaps it’s all from your imagination.

GT: I have shelves in my studio that house storage boxes of things that I think might work in paintings. Among the items I have are: jars, bottles, glass electric high-line insulators, marbles, comics, magazines, fireworks (Lord help the neighborhood if my studio evercatches fire.), and an assortment of trinkets. I want to emphasize, however, that these items are only starting points. As I work (using oil paint applied with brushes to either prepared canvas or paper) objects in the painting undergo continual change and what is finally seen has largely been affected by my imagination.

Before we get off the subject of collecting I’ll tell you what happened with my first collection of comics. When I was fifteen years old I had amassed around 300 comics, each one a perfect example of pure magic — vintage: 1950 to 1964. By that time adults had impressed the notion upon me that comics were childish, inferior items not worthy for the suave, superior world of adulthood — a world, as the adults pointed out to me, I was soon to join. I started dating a girl, and she asked me for a bottle of Chanel No. 5 for her birthday gift. Although at that time comic books were not expensive (ten cents for a new comic), and their re-sale value was minuscule (two and a half cents — at the most — per comic), to raise the money for the gift I decided to sell my comics. My reasoning went something like this: a romantic relationship was an adult thing, and I would affirm my involvement in that with an adult token; at the same time I would relinquish my childish ideas, as demonstrated by parting with my comics. A great plan I thought, and one with which the adults proudly agreed. I sold my beloved collection of comics for exactly the price of a bottle of Chanel No. 5 perfume. I gave the gift, and for a brief period of time felt (although it was never a deeply satisfying feeling) that I had left childhood behind, and in so doing, moved from a realm of silliness to one of stature. Within a week of accepting my gift, the girl had broken up with me and found a new boyfriend. I learned a lot from this experience. And I might add, I changed my mind about comics and decided to be delighted with them again, regardless of adult opinion. 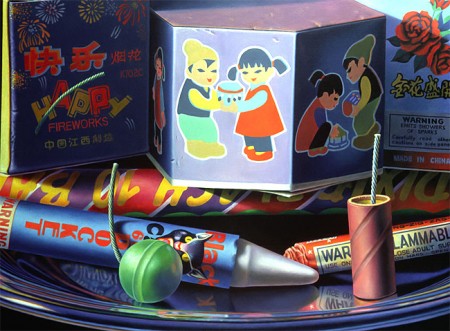 AM:  Coincidentally you live in Oxford, Mississippi, the same town that William Faulkner whose quote we derive our website’s name is from — “The aim of every artist is to arrest motion, which is life, by artificial means and hold it fixed so that a hundred years later, when a stranger looks at it, it moves again since it is life.” Is his legacy well-known around that area? How do you think living in that region has affected your art, if at all?

GT: Faulkner’s legacy is well celebrated in Oxford. His home has been made into a museum which tourists visit year-round. A life-size bronze statue of Faulkner is on the lawn of the City Hall. The annual Faulkner Conference is attended by people from all over the world. I respect Faulkner’s dedication to his art, and his high level of artistic achievement. I consider him one of the great writers. If my work has been affected by Faulkner in some way it would be a positive thing. 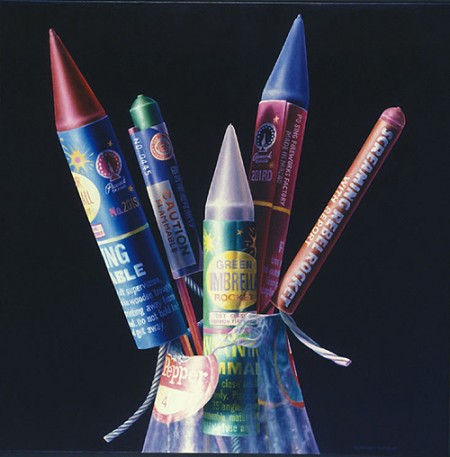 AM: Do you have any exhibitions coming up or projects that you are working on that you can share with us?

GT: I’m scheduled to have an exhibition next year in Switzerland. I’m designing the package for Paul Collins’ upcoming vinyl 7″ record. I’ve just begun work on a new commission for the esteemed collector Mark Parker (President and CEO, Nike, Inc). This will be the largest painting yet in the comic book series. The last exhibition I had on the West Coast was in 2000 – ten years ago! So maybe it’s time I started thinking about a show out there for the near future.