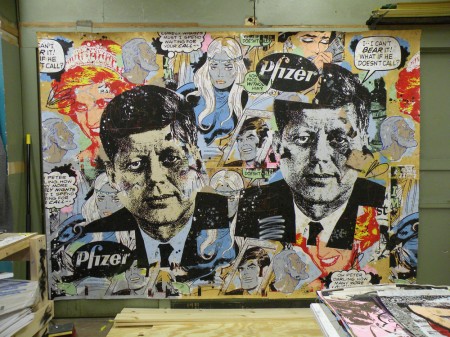 AM recently had the opportunity to sit down with Minneapolis-based artist Greg Gossel as he was preparing for his upcoming and massively ambitious solo show, “Happy Endings.” Greg chatted with us about the evolution of his art, themes of his current show, his inspirations and even addressed the comparisons that have long been made between him and the NYC collective Faile. “Happy Endings” opens this Saturday at The Shooting Gallery.

Full interview and preview pics after the jump. 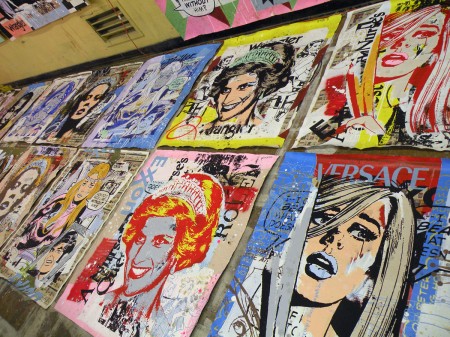 Arrested Motion (AM): First off Greg, thanks for taking the time to sit down and talk with us. Could you introduce yourself to our readers and give them a little background on who you are and what you do?

Greg Gossel (GG): I’m an artist based out of Minneapolis, Minnesota. I grew up in western Wisconsin and received my BFA in graphic design at the University of Wisconsin-Eau Claire. Although I was a design major in school, I had always loved painting, and spent as much time as I could in studio courses. After finishing up school I moved to Minneapolis with plans to pursue a career in design, while painting in my spare time. As things progressed I began to focus more of my time on painting, and less on design work. I’ve now been living and working in Minneapolis for the past four years, and these days spend the majority of my time in my studio, while still doing a bit of freelance design work from time to time. 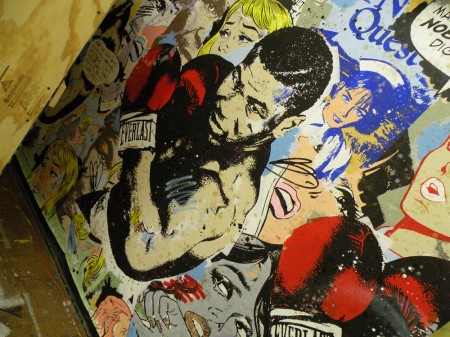 AM:Â  Your upcoming show at Shooting Gallery SF is entitled “Happy Endings.” Can you shed some light on the themes and what we can expect with this new body of work?

GG:Â  Yeah I guess the overall tone of this show is a bit darker than most of my previous work. Many of the pieces incorporate this ongoing theme of a fall from grace, pieces of our collective history which were not the storybook endings that are so often portrayed in mass media. There are also undertones referencing subjects such as violence, oppression, consumerism, addiction, and inequality. I tried to reference these ideas through the use of a variety of appropriated images pulled from sources such as pulp novels, romance comics, fashion magazines, and old newspapers.

Aesthetically, I feel this new show is bolder and more complex than much of my previous work. The past 6 months have been fairly transitional for me, which I think has reflected upon this new body of work. I’ve recently moved into a much larger studio, which has afforded me the opportunity to work on a greater scale, and further explore the medium of silkscreen printing. As a result, this new show includes some of the largest canvas pieces I’ve created to date, and the element of silkscreen printing has become much more predominant than in the past. There is something I really love about the medium of silkscreen; the instant gratification of a print, the ability repeat and overlap images very quickly, while having the opportunity to experiment with different colors and printing techniques. My work is quite spontaneous by nature, so having that increased ability to quickly reproduce and change imagery within my work has been great. I think it adds greater detail and complexity to my work, and creates an interesting contrast to the more expressive brush strokes and mark making within each piece. 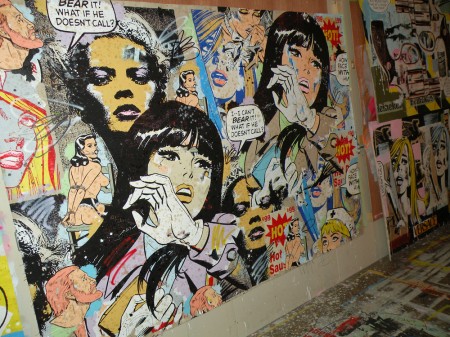 AM: With over 50 new pieces being created as we speak (one of them being over 9’x6′), “Happy Endings” is looking pretty damn ambitious… How long does your average piece take? Would you mind breaking down the creative process for us?

GG: It really depends. I often work on a variety of pieces at once, as opposed to creating one piece at a time. It seems to be a bit easier for me to jump around from one painting to the next throughout the process, trying not to get too stuck on any one particular piece. That being said, I would say it generally takes me 2-3 months to create a new body of work consisting of maybe 30 pieces or so.

As far as process goes, I’m always collecting a wide variety of old comic books, magazines, newspapers, paperbacks, etc, which I’m constantly digging through and pulling imagery from that I’d like to incorporate into my work at some point. So when preparing for an upcoming show, I’ll go through these images and start to pick and choose what I’d like to incorporate into the new body of work given the theme of the show, and feelings I’m trying to convey. I spend a lot of time going through this process narrowing down a group of images that I feel will work well together with the overall idea of the show. From there, it’s a lot of prep work, creating film, exposing screens, cutting canvas, etc.

Once I have everything ready to go, I will generally begin by building up an initial working surface with collage or various hand-painted elements on canvas, wood, or whatever material I may be working on. More often than not, this initial surface is completely covered by further layering throughout the process. I then continue incorporating various silkscreen prints and hand painted elements into the piece, along with sanding, washes, and lacquers to weather the surface. I try to always experiment and incorporate a wide variety of media into each piece – collage, spray paint, watercolor, graphite, marker, and acrylic. I generally have a rough idea of where I want the piece to go, but for the most part it’s a pretty spontaneous process. I continue this process of building up the piece with various media until I feel satisfied with the overall composition. 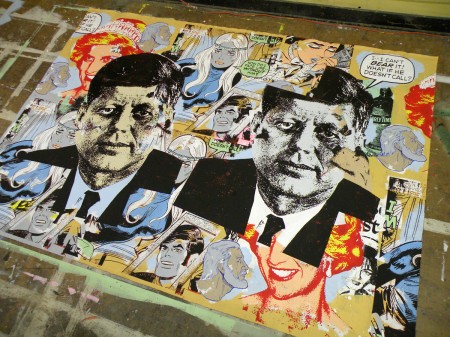 AM: You recently spent the day going out around Minneapolis taking photos of vintage signs and derelict buildings for inspiration, what else inspires you?

GG: Growing up in a fairly rural area in the Midwest, I guess I’ve always kind of had this fascination with cities, particularly the more neglected run-down parts. I find a lot of inspiration in the old hand painted signs, weathered billboards, faded paint, and decaying posters. There is this constant overload of information in urban areas that I really try to take in and incorporate into my work. Here in Minneapolis, and whenever I have the chance to travel, I always try to snap pictures capturing some of these areas. I think having that opportunity to visit different parts of the country and world over the past couple years and take in these different cities and cultures has been a huge inspiration to my work. 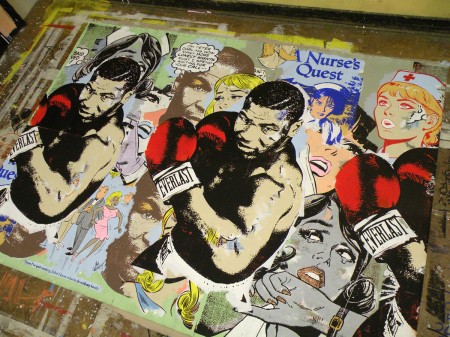 AM: While I don’t take chat room bickering and pigeon-holing seriously, you have been referred to as “the poor man’s Faile”, what are your thoughts on this comparison and on artistic influences in general?

GG: Yeah, to be honest, that’s something that definitely bothered me when I initially heard things like that, but these days I really try not to pay too much attention to a lot of that stuff. Those guys do great work and have been very successful with a really recognizable style. I understand that there are some obvious stylistic similarities between their work and my own, so I see how the comparison is made. I think it’s human nature to make comparisons, whether it be art, music, or anything else. I’m the same way when listening to an album, or checking out a new artist, so I think it just kind of comes with the territory that if you’re creating work and putting yourself out there, you’re always subject to those types of comparisons and criticisms. There are some people out there who spend a bit of time online checking out my work, and would rather label me as some sort of imitation of Faile, rather than take the time to learn much about my past work or how I got to where I am today. But ultimately, I know that my own work will continue to change and evolve over time as it has over the past 5 years, so I really just try to stay focused on continuing in my own direction, and not worry too much about some of the negativity and criticisms that are floating around out there. 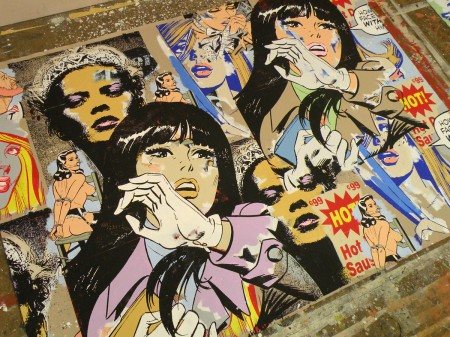 AM: Will.I.Am named your portrait of MIA as one of his favorites from the “Worlds on Fire” group show earlier this year. Are you a big MIA fan? What sort of music do you listen to when you’re working?

GG: Yeah I definitely dig MIA. It was a cool show to be a part of, and having the opportunity to create a piece portraying MIA was a really great fit. She’s got such a colorful crazy style and attitude, it was fun to try and incorporate that feel into the piece. As for music when I’m working, I definitely always have something going. It’s generally a pretty random mix though which changes daily depending on my mood and what I’m working on. Lately, I’ve been listening to a lot of Bjork, Led Zeppelin, Stooges, and Smiths among others. I tend to generally tune into a lot of NPR on and off through out the day as well. 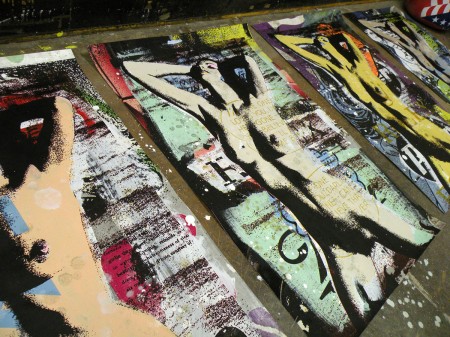 GG: Yeah after getting back from my show in SF, I’ll be spending a few weeks in the studio, and then heading out to Toronto for a 3 person show with Steve Powers and Greg Lamarche titled “Get Over It” at Show & Tell Gallery that I’m pretty excited about. Then this October I will be having my first solo show in Minneapolis at the Soo Visual Art Center which I’m really looking forward to as well. 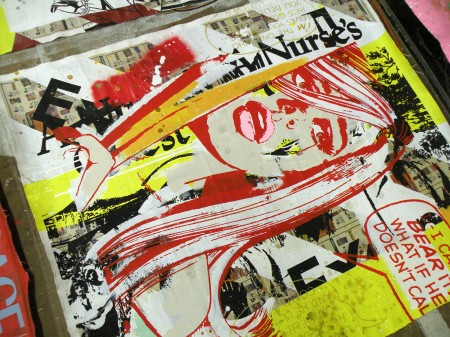 AM: Greg Gossel’s words of wisdom?

GG: I would just say really take the time to do the things you love, and try not to worry too much about making mistakes along the way.