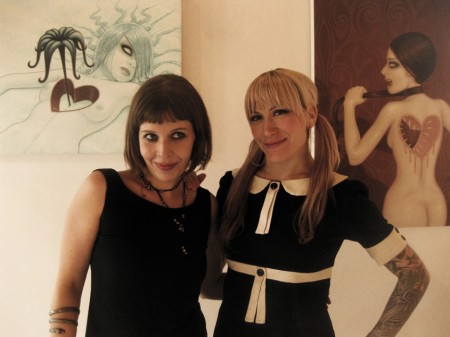 The “Pop Surrealism“ museum show AM recently previewed is now showing at the Carandente Museum in Spoleto, Italy. Put together by Rome’s Dorothy Circus Gallery, with assistance from New York’s Jonathan Levine Gallery, the exhibition brings together 45 artists from the new contemporary scene, including Mark Ryden, Marion Peck, Tara MacPherson, Jeff Soto, Travis Louie and a wonderful piece from Joe Sorren. The majority of the work was loaned by collectors, with the lion’s share from owner of Dorothy Circus, Alexandra Mazzanti’s own collection.

The Carandente serves as a beautiful setting for the works on display, and as the exhibition has been up all summer, those lucky enough to be holidaying in Umbria this year found it to be a great way to soak in some contemporary culture amongst the other more traditional sights on the Italian tourist trail.

Tara MacPherson, Leila Ataya, Mijn Schatje and Kukula made it out for the opening of the show, which has been preserved in the form of an accompanying catalogue raisonné entitled “Pop Surrealism: What a Wonderfool World,” published by Drago Lab.

The show is planned to close 15th October 2010. Check out some further flicks from the opening after the jump.

Thanks to Eleonora from Dorothy Circus Gallery for the pictures.