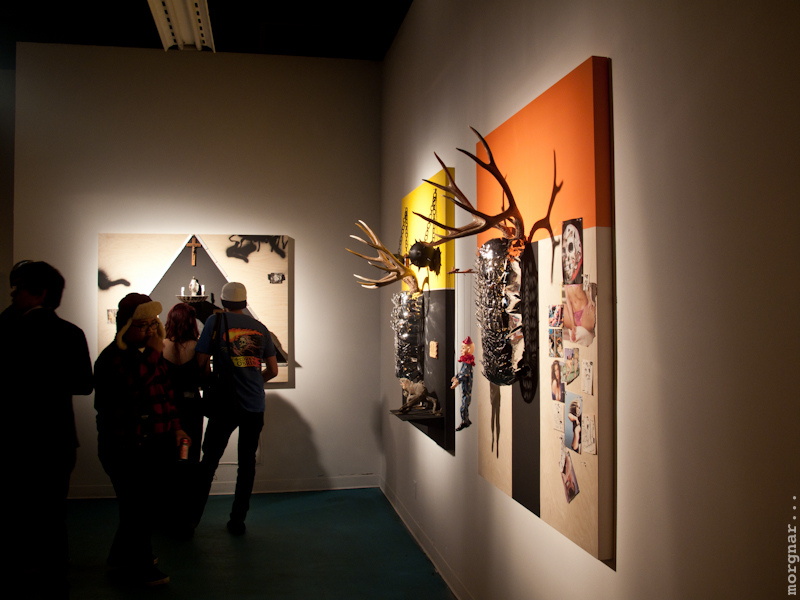 With wall to wall people and a line wrapped around the block, Neck Face proved for the second straight Halloween just why his nightmarish art and the pagan holiday are such a fitting marriage. OHWOW truly pulled out all the stops for the street artist’s Southern California homecoming exhibition, Into Darkness (previewed), where rowdy costume clad attendees enjoyed plenty of tricks and plenty of treats, including the obligatory haunted house to commemorate the evening as well as a full halfpipe and skate demonstration and plenty of free booze taboot.

The real treat, however, was Neck Face’s campy sense of humor. Perhaps the most effective display of his tongue in cheek wit revolved around a series of works on paper involving creepy characters and psychotic situations, some utilizing the same Hollywood culture playing host to the event as the punchline. An additional collection of works on panel reinforced Neck Face’s brand of comedy each adorned with a bit of widsom disguised in slapstick slogan form. With the overwhelming success of this show, let’s hope the artist and gallery team up again next year for yet another art filled Halloween party.

More opening photos after the jump.