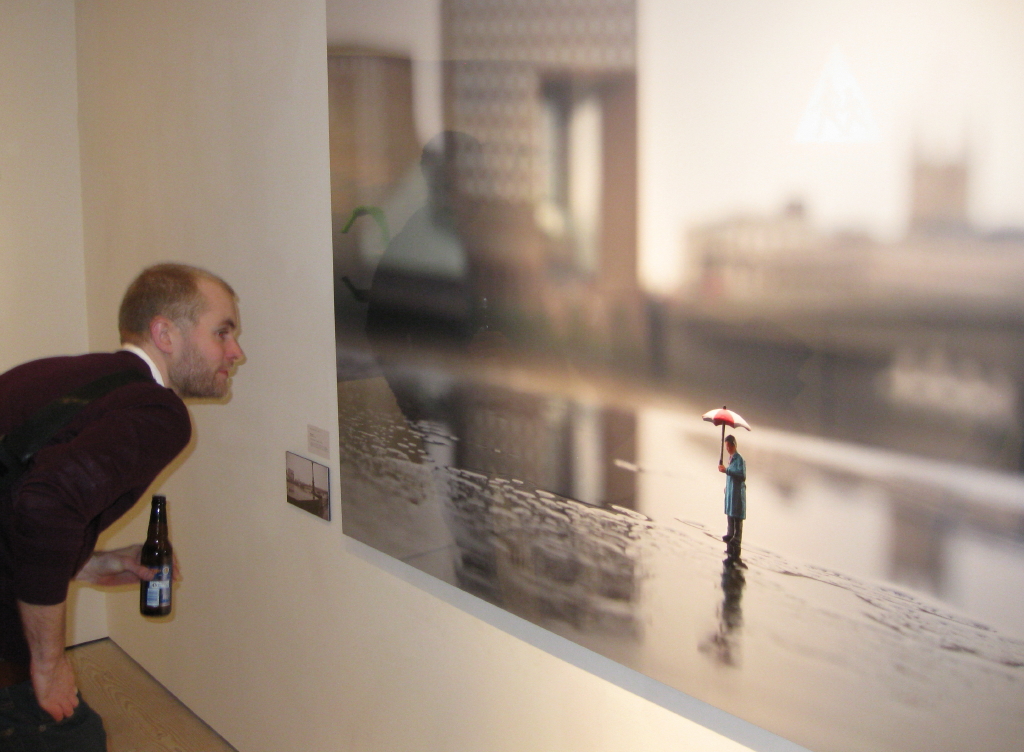 Last Wednesday 2 March saw the opening of the Slinkachu solo exhibition, Concrete Ocean (initially mentioned by us in January), at London’s Andipa Gallery. There was a refreshingly mixed crowd in attendance, with a number of the regular faces at East End shows having dusted off their passports and made the trek over to Knightsbridge. To the gallery’s credit, the complimentary bar never ran out of alcohol, which helped maintain a cheerful atmosphere throughout the evening. As for the art itself, guest reception was enthusiastic. There were certainly plenty of red dots next to the editioned works displayed both on the ground floor and in the basement space. The show runs until 2 April.

We like Slinkachu, and we also like to think we’ve walked by one or two of his miniature installations in the street without even realising it. If AM had a chameleon’s ability to simultaneously focus each eye in different directions, we’d probably use one of them to search for the artist’s Little People on the ground while going about our daily business. But with our less evolved, non-rotating eyes, and despite wanting to believe we aren’t really concerned about what others think, we’re actually a bit self-conscious about being mistaken for a crackhead scouring the pavement for a missing rock.

Of course, constantly looking downward would also seriously reduce the likelihood of making accidental eye-contact with that impossibly beautiful stranger, who then approaches and says, “Hey, the goddess Fortuna was by my side at the casino last night. I’ve now got too much cash for one person to spend, and I’m free all week – Let’s fly to Reykjavik and hang out.” So keeping both chin and eyes elevated is just a matter of getting our priorities straight. No offence intended to Slinkachu.  See more text and photographs after the jump. 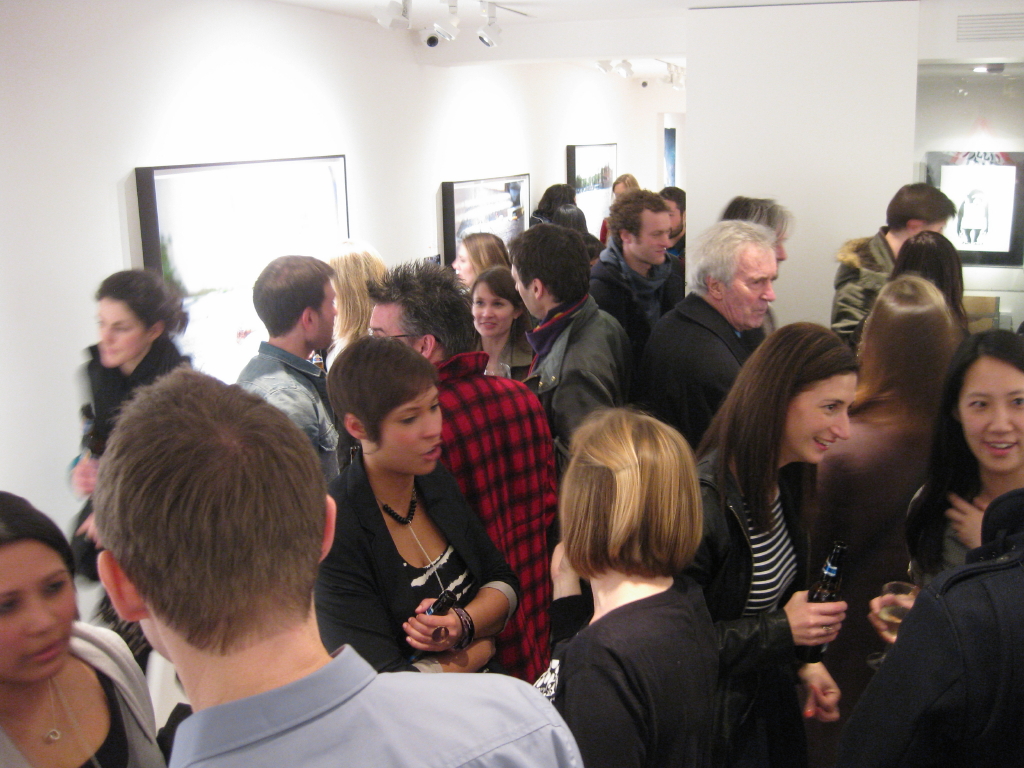 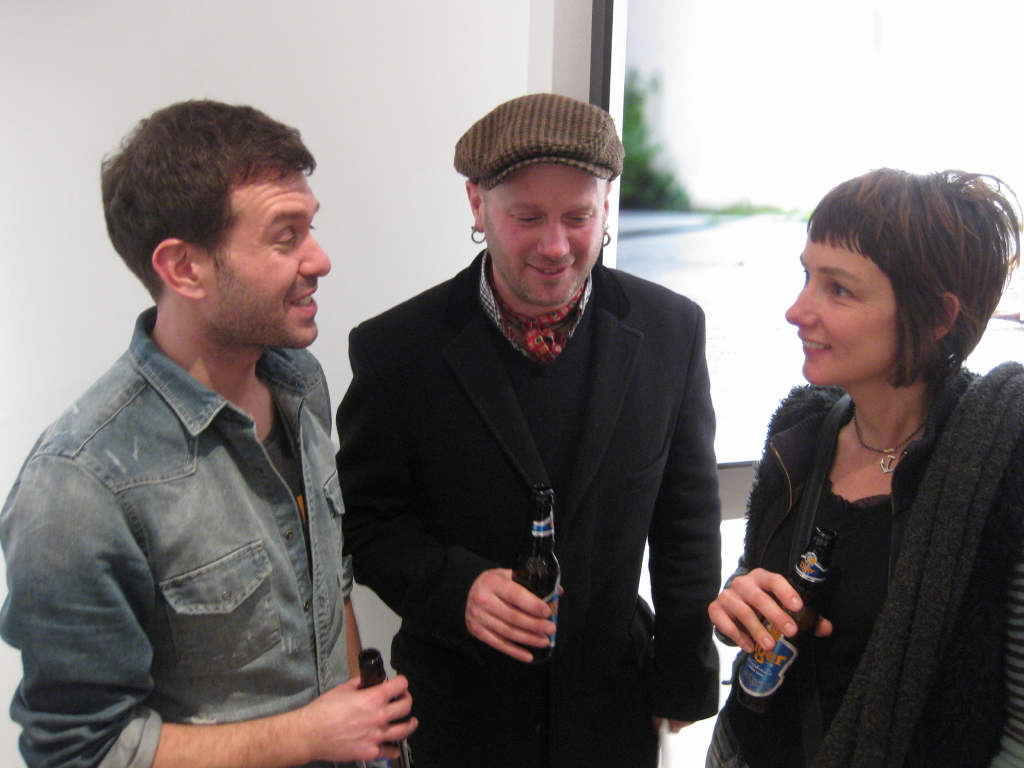 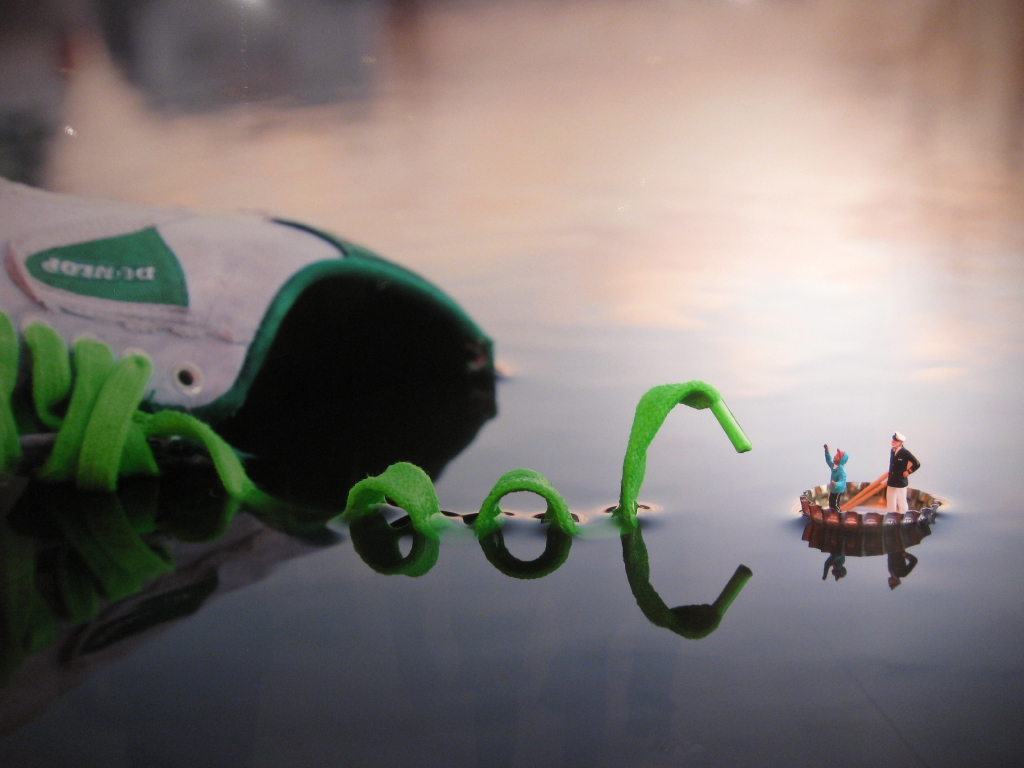 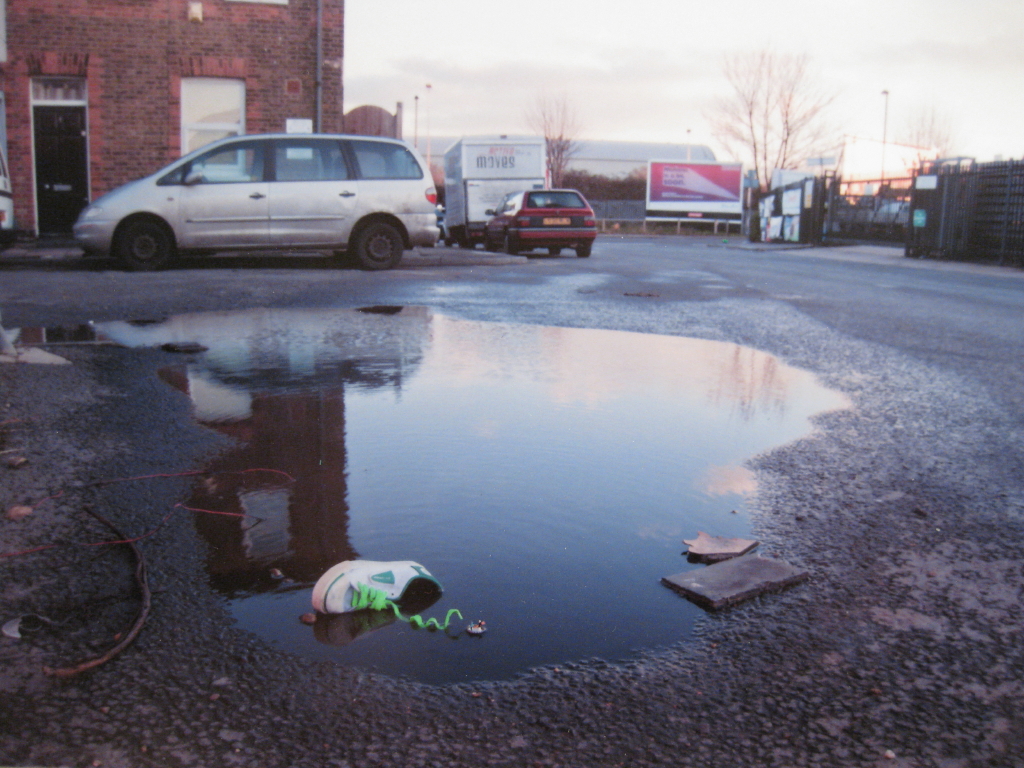 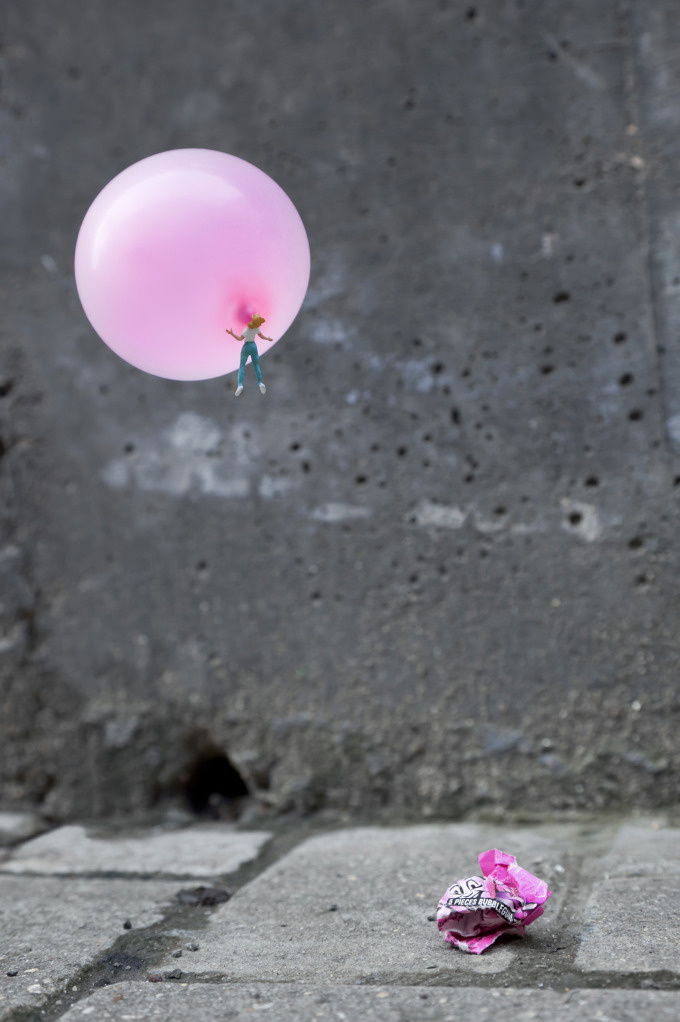 The C-type prints at the show were produced in editions of 15, as well as larger-format editions of 5. A few were available on aluminium as editions of 3, measuring a whopping 120 x 180 cm. AM spotted three prints which could be purchased in a framed lightbox format, including two images in black-and-white — a direction we haven’t seen the artist take before. The exhibition also features eight sculptural works, with a few of these being especially intricate, even by Slinkachu standards. Concrete Ocean was apparently six months in the making, and it showed. 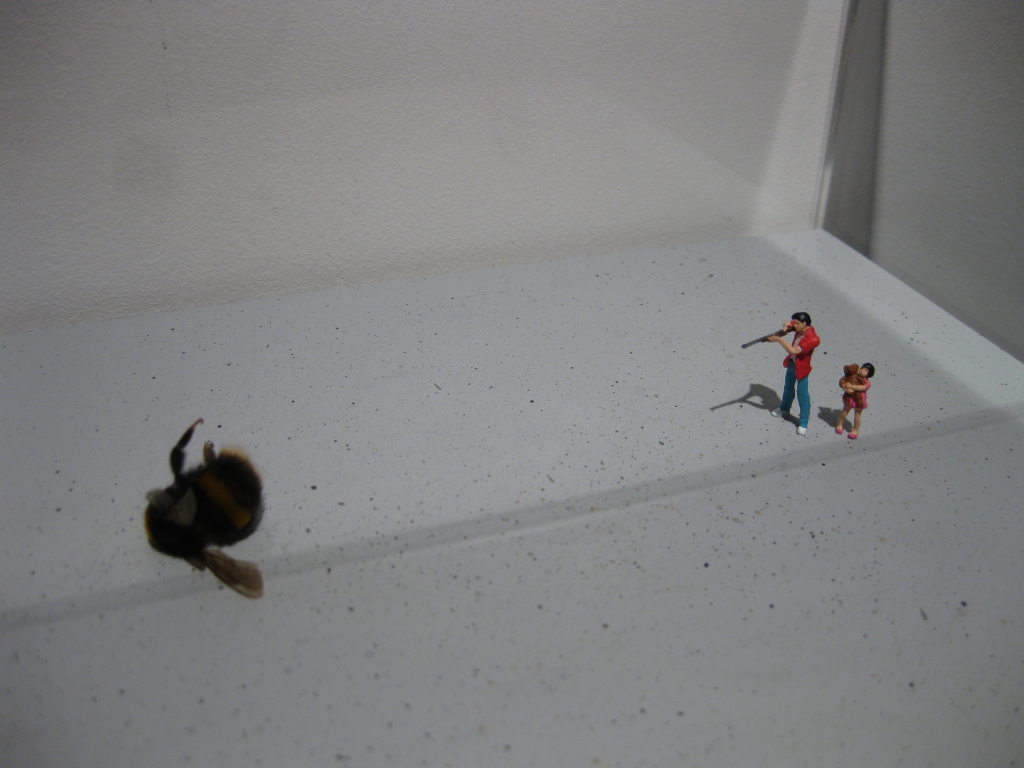 'They're Not Pets, Susan' 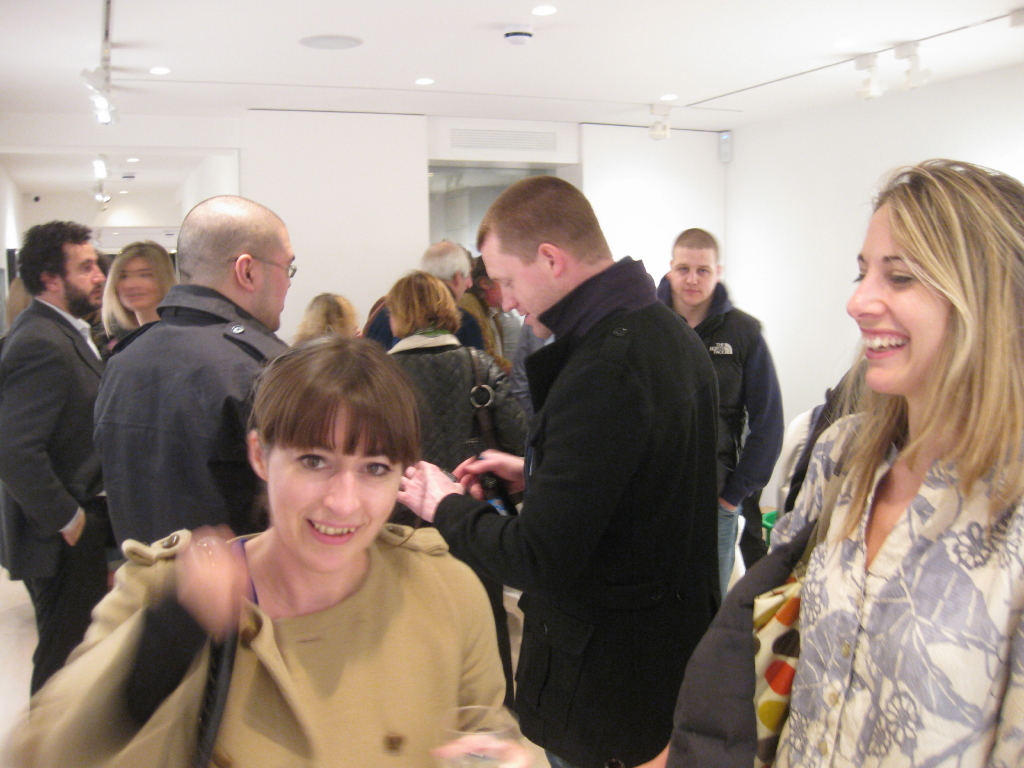 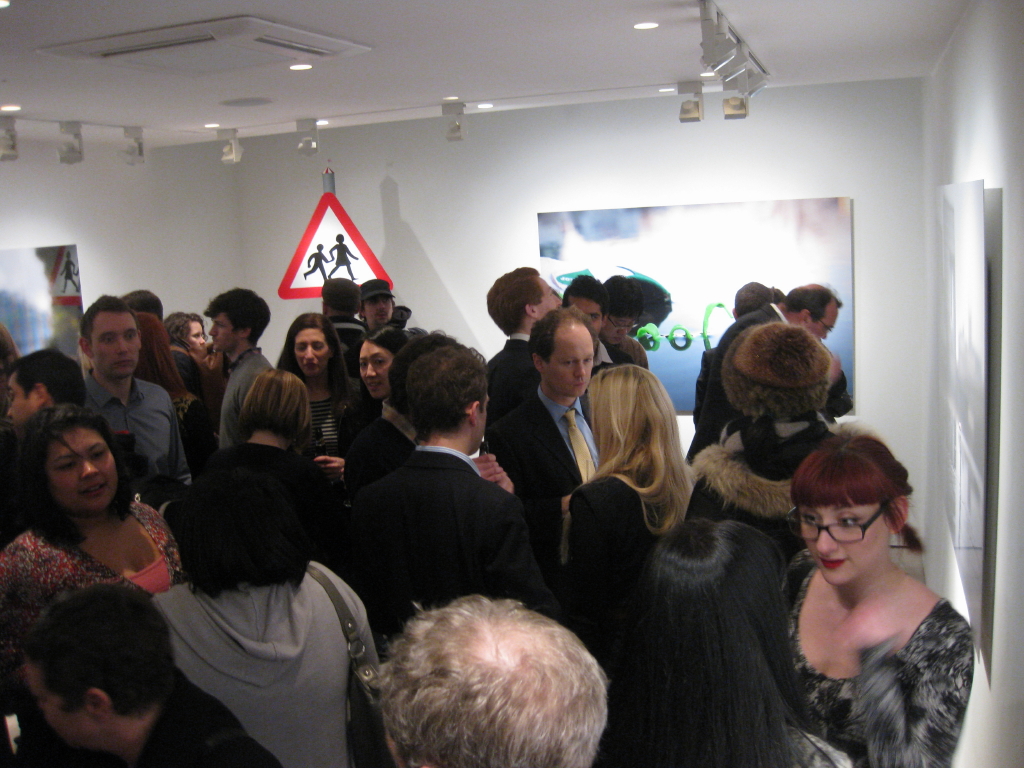 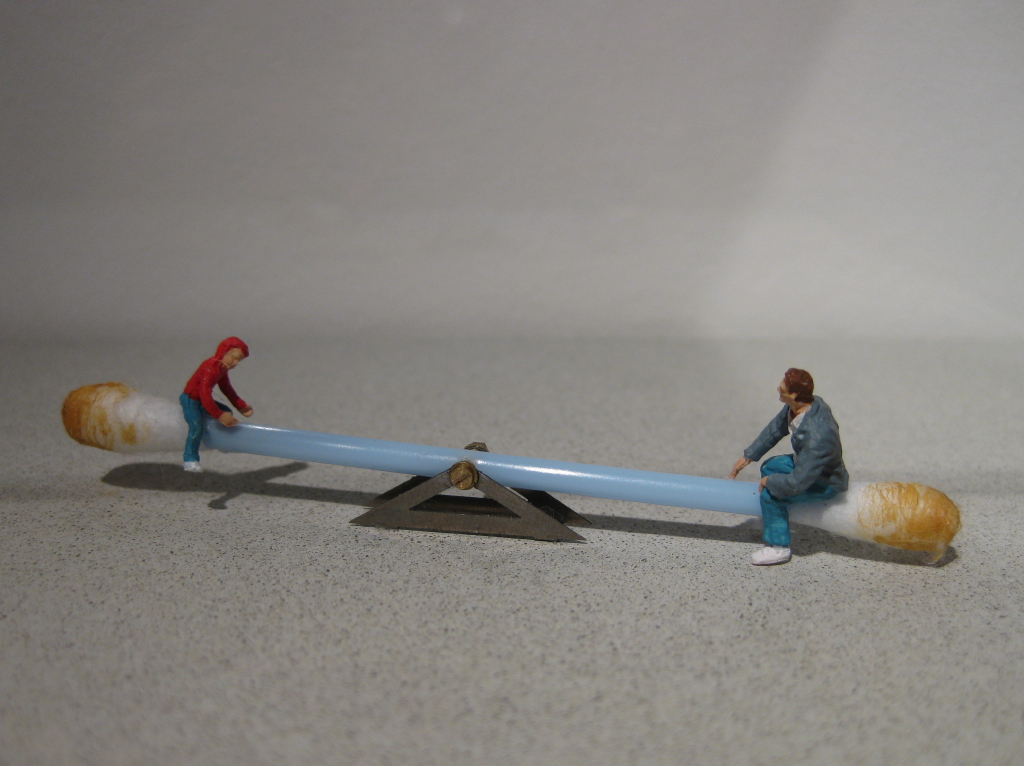 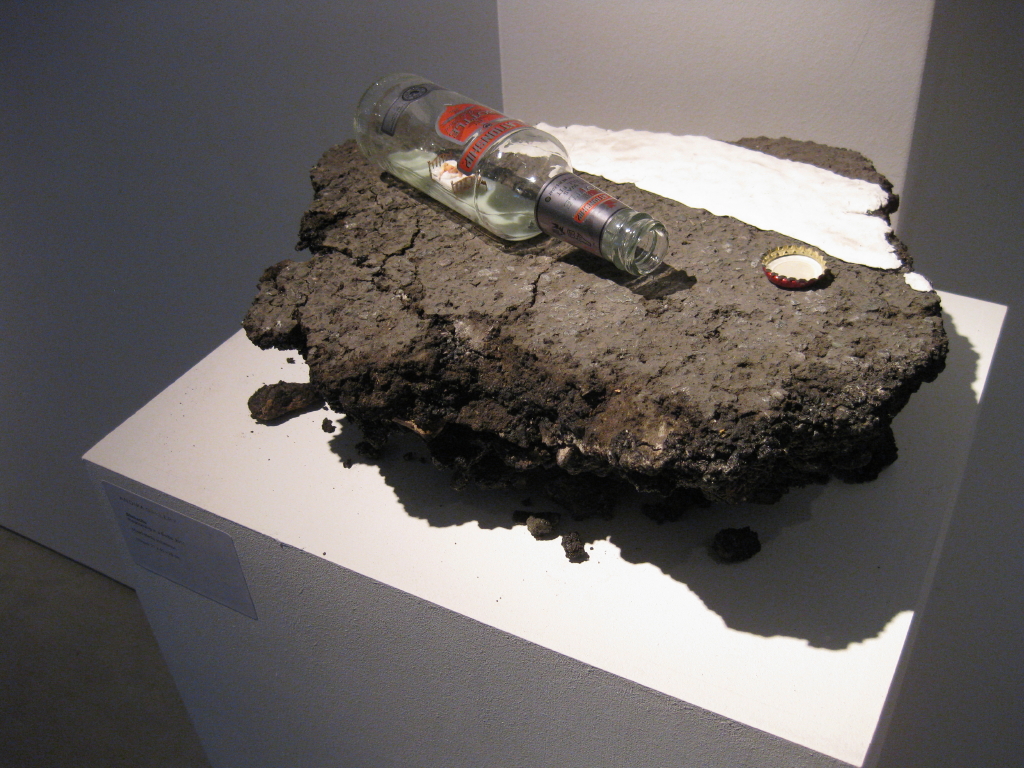 'Relationship in a Bottle' 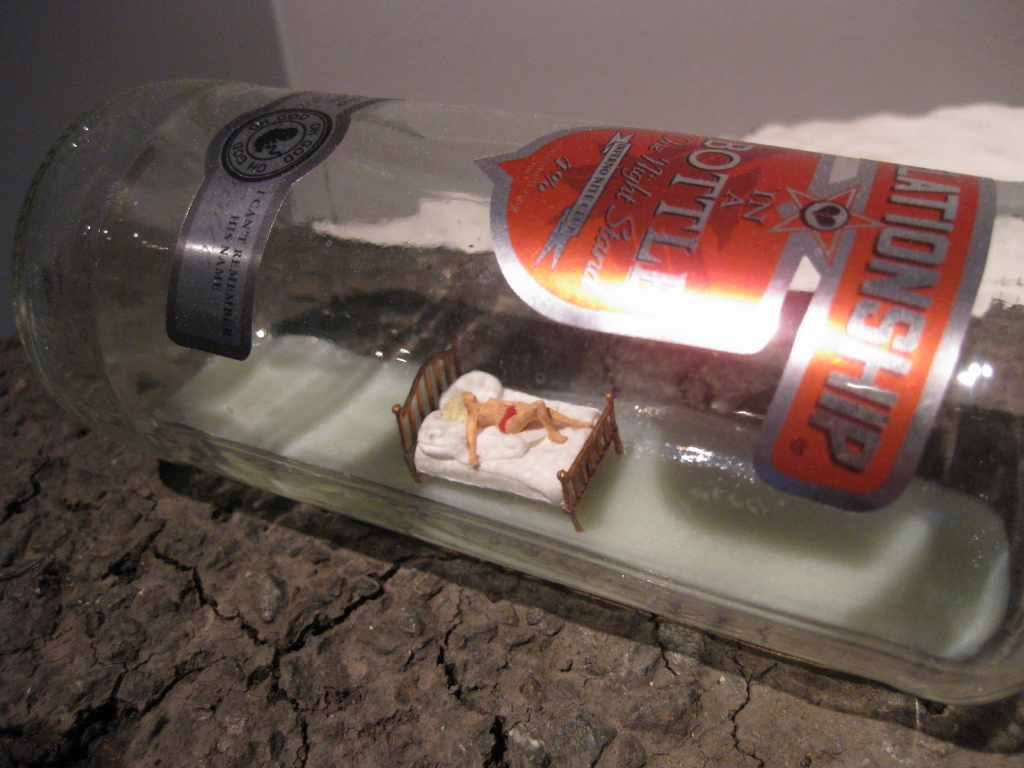 'Relationship in a Bottle' (detail) Note the label text, including "Oh god" and "I can't remember his name" 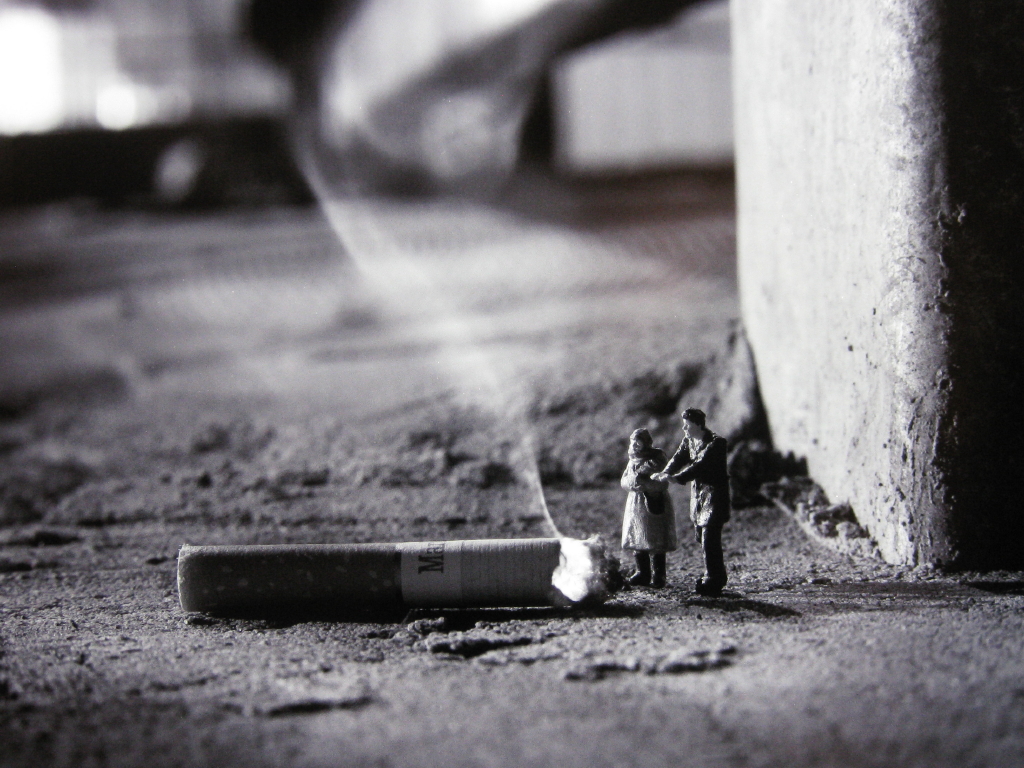 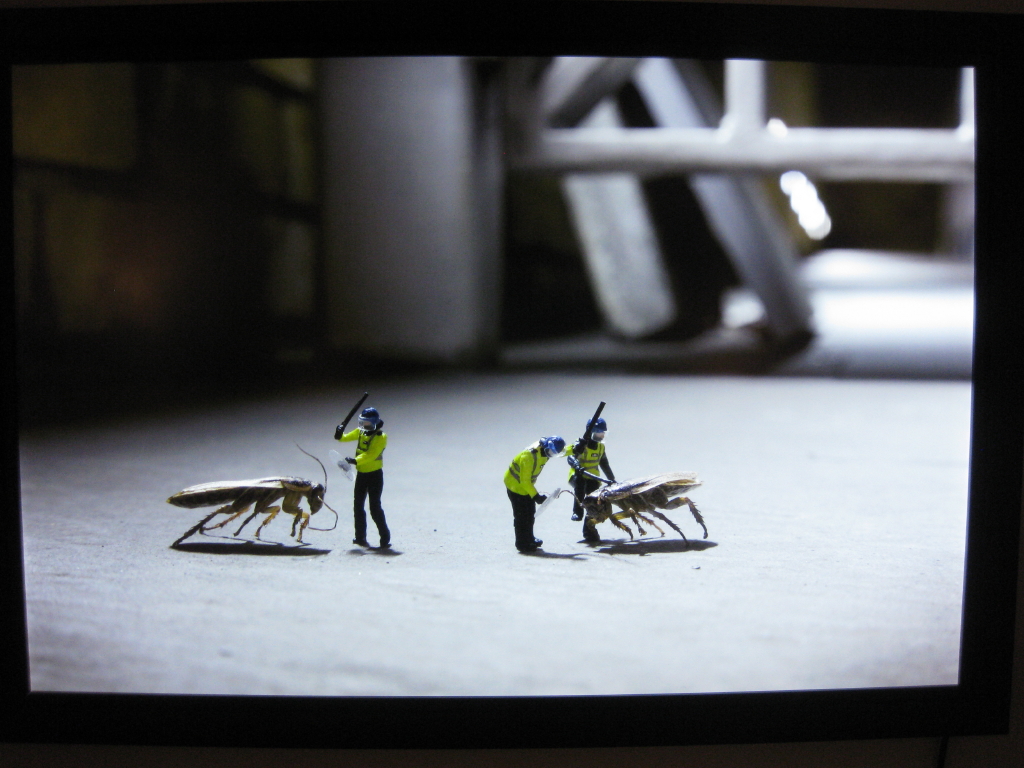 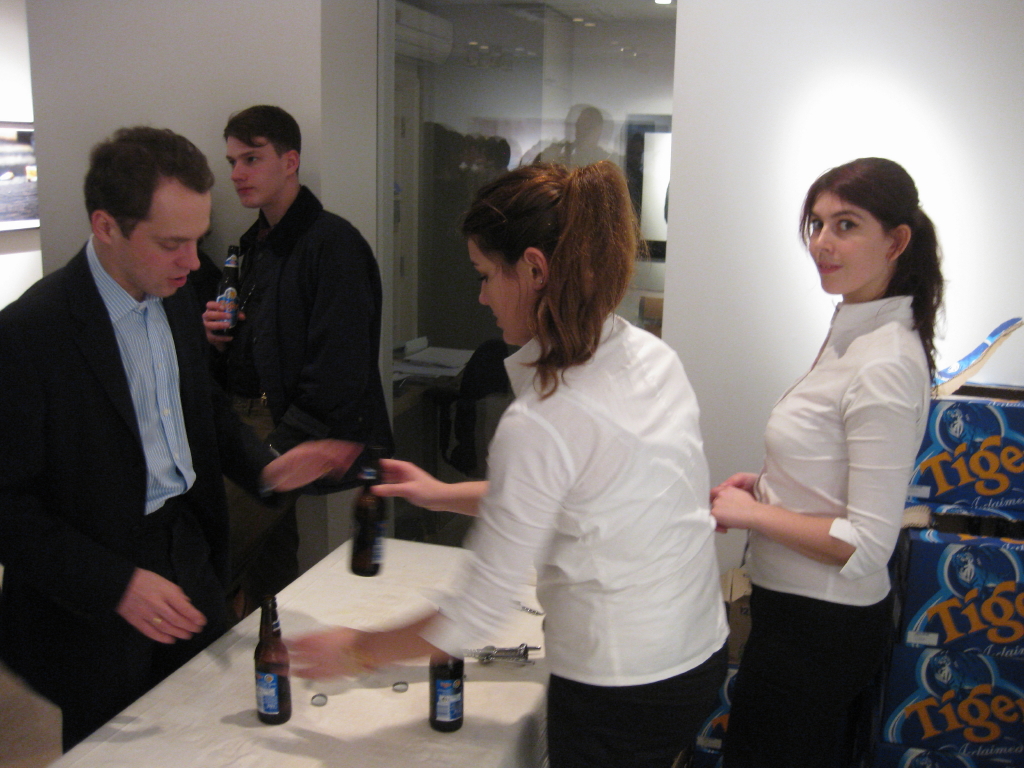 For AM, this was a strong exhibition, and much more so than Slinkachu’s previous solo effort at Andipa in June 2009, Whatever Happened to the Men of Tomorrow? — based on the theme of ageing superheroes, past their prime and now abandoned by society. [Note to street artists and other creatives: Regardless of whatever new takes and interpretations you may come up with, large sections of your audience are experiencing fatigue when it comes to imagery of characters in capes and spandex suits. To misquote the Stranglers, “No More Superheroes” — at least for a brief respite. Please and thanks.]

‘It’s All Fun and Games’

“See, if I tap them together like this, I can give myself an electric shock.”

‘Relationship in a Bottle’

‘Relationship in a Bottle’ (detail) Note the label text, including “Oh god” and “I can’t remember his name”