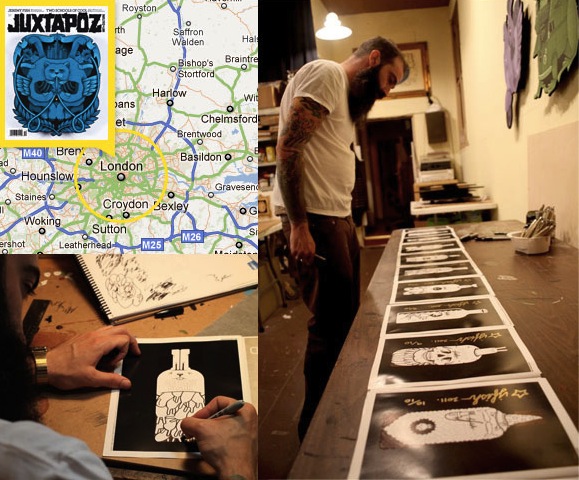 Cover artist Jeremy Fish (featured), who back in July had an impressive exhibition with Joshua Liner Gallery in NYC, has devised a fun publicity campaign for the October Juxtapoz issue. In an continuation of his association with the ABSOLUT Blank project (see his artwork here), the Bay Area artist has rendered original pieces of art on the inside front cover of 10 copies of this issue as part of the ubiquitous, art-inclined vodka company’s ABSOLUT Blank Golden Ticket x Juxtapoz campaign. While 3 Golden Tickets were mailed at random to Juxtapoz subscribers within London, the remaining 7 are being secretly placed on newsstands within London’s city limits. Let the scavenger hunt begin.

As a gimme, Juxtapoz has kicked things off with a hint..

“Starting Wednesday, September 28, 2011, one Golden Ticket issue will be available on the newsstand at Magma Product Shop (8 Earlham Street, London WC2H 9RY, United Kingdom), while the remaining 6 are up to you to find on similar newsstands around the city of London. By plane, train, or automobile, get your ass to London for an ABSOLUT Blank x J Fish original.”

Go find them all you London-based art fans.