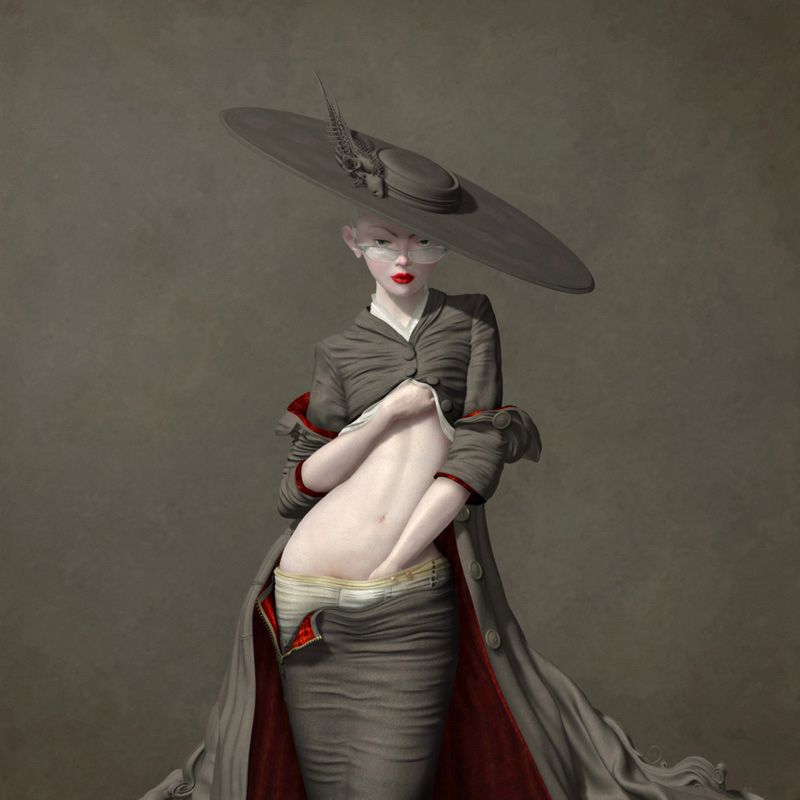 This Saturday night (Oct 22), Ray Caesar will be bringing his digital masterpieces to Corey Helford Gallery for his first solo exhibition there. Entitled A Dangerous Inclination, the new body of work has a deep personal meaning for Caesar as it touches on the hidden places in his psyche as well as reflects on childhood experiences. AM had the opportunity to talk to him about this and many other things in an interview leading up to the show.

Questions and answers after the jump… 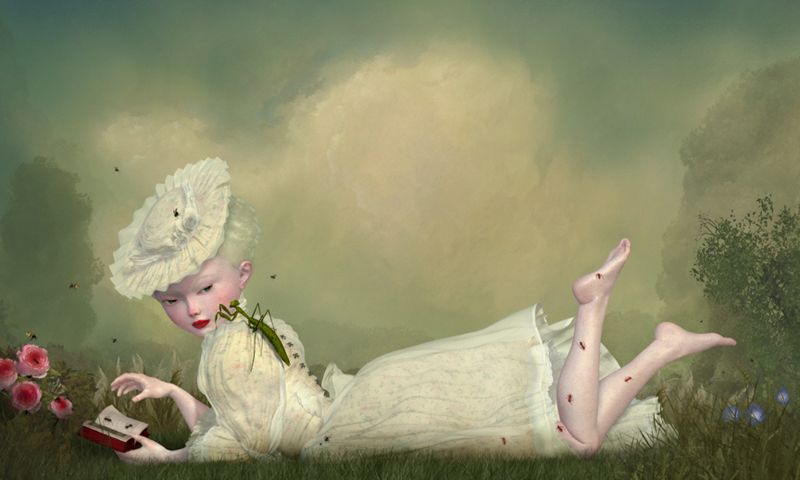 Arrested Motion (AM): Can you tell us a little about your new body of work?  Are there any overarching themes or messages you are trying to get across?

Ray Caesar (RC): I don’t really approach my work with a preconceived message but I do find a continuation of a process that unfolds that surprises even me after I finish the work. It does seem that my work contains aspects of a story that unfolds and has a great deal to do with a process of intense psychotherapy and the years of dealing with dissociative identity disorder (a form of multiple personalities) and trauma I went through in childhood. Virtually all of my work deals with coming to terms with  the subconscious elements to my life and the way I experience the world around me. My work seems to keep on the regular themes of “Hunting Back Innocence” and “Revelations of Light” and the painful process of “Self Examination” and hidden voices calling like sirens in the night. Premonitions and the worlds of pleasure and pain and ugliness and beauty and humiliation and dignity. For many people what I do is art, but for me the pictures are a communication from my subconscious to my conscious mind. That being said, I love and enjoy what I do and on one level it’s always simply been about sitting in the sun and  making pretty pictures.

AM: Your creative process is unique as you use 3D modeling programs and such to create your characters and then stage them in environments.  Can you talk a little more in detail as to what that entails and what you feel are advantages and disadvantages of this method compared to traditional techniques?

RC: Working in a 3D environment using Maya just seems to suit me as it’s a very sculptural way of making images and rather than just drawing a picture, it’s a way of building the content of the little world I create.  It’s very much like constructing a fairytale story with the dolls and toys you had or wanted as a child. In this case, you are building all your toys and with those toys you start to see differences and more clarity each time you enact out that story. I really love modeling my figures in Maya and setting up the figures with movement and posing and building the dresses and shoes and styling the hair and creating the rooms and chairs and hidden contents that exist in each box and hiding place. I set up the lights and adjust virtual cameras and it always seems to me like the opening night of a little theater when I begin to see the final image. I think that creating another little world within a world is very much like looking inside my own head in a way.

I have drawn, painted, and made sculpture for years and for some strange reason, I don’t see what I do any “less” traditional than those methods as it seems I have been given a tool to play with my imagination. I think in the coming years, the computer will become the greatest tool that was ever made for creativity, art, and the exploration of the human imagination and the tradition is being made as we do it now. 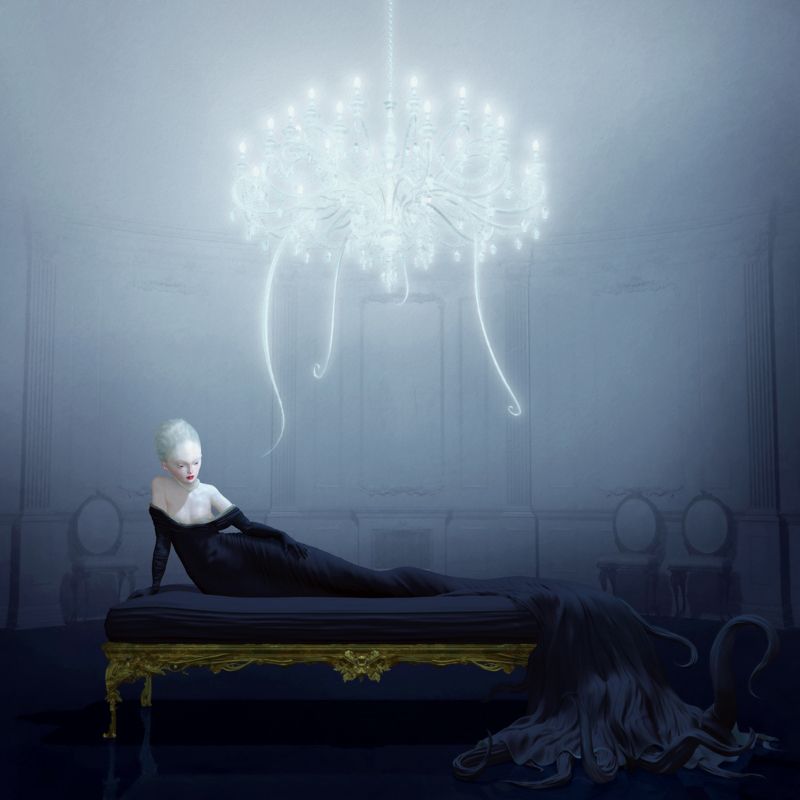 AM: You have often described an affinity for seeing beauty within when viewing something grotesque and unpleasant as in your work. How did you develop this philosophy and in what ways does it affect your life, art included?

RC: I have always thought of my work as a form of self portrait or at least the portrait of what its’ like to look inside my head. I think it’s natural to look in a mirror and see something beautiful and grotesque and many of us swing back and forth in our own estimation of that reflected image of who we are – more or less so if we are naked in front of that mirror!

I think for an artist, dealing with putting their emotions, passions, love, and pain onto a wall we have to be honest with what we find in the reflections of our inner mind and subconscious. Sometimes that process can be hard and if I am going to bring the world into the living room of my subconscious, I am damn well going to tidy up and make the place as pretty and presentable before everyone arrives. It’s sort of like saying – oh! yes rats and decay live in that little corner over there so I put the rats into pretty silk blue dresses and tiny little silk blue rat shoes (with some difficulty I might add) and mixed some dip into the decay so please all sit down and have a glass of punch – which, by the way, I have spiked with gin to hide the aftertaste of arsenic. I am not sure its a “philosophy” but i’ts the best I can do if everyone arrives to the party unexpected. In a nutshell, I think life can be hard sometimes so the best thing we can do is put up a good front and do the best we can and if you can’t find the prettiness in the putridity, then you’re basically just left with the putridity.

AM: Much is known of your previous career at a children’s hospital and how your work is influenced by the abused, neglected and deformed children you were surrounded by everyday. What are some of the reasons you have made art in response to these experiences?  Do you see it as a catharsis of coming to terms with what you saw, a natural reaction of painting things you are familiar with, an attempt to do something for these poor children that you couldn’t do back then, or more probably something completely different?

RC: I don’t think I had any altruistic reason for including the content of the 17 years I spent at the Hospital For Sick Children. I believe those years helped me come to some realization of my own childhood and the difficulties I will have from that early time for the rest of my life. As a child, I used pictures as a way of hiding feelings and emotions I wanted to protect in situations that were extremely dangerous. If I experienced something that overwhelmed me, that I couldn’t deal with, or had emotions I wasn’t allowed to display, I used to draw it into a picture. Those pictures became a doorway to a happier, safer place – and sometimes a dangerous place for others because it was MY place. Years later while working at the hospital I realized I was doing the same thing. If I saw a child that had been burned with an iron, I couldn’t handle the image in my mind and function. So, I put the image into a picture, sometimes repeatedly (in fact, I drew and painted pictures about irons for 10 years ), and then I would put the picture away into a closet. Sometimes I would have a little ceremony at night and burn the picture in my backyard. For years and years I didn’t realize what I was doing but it occurred to me much later in life that I was dealing obsessively with emotions on a subconscious level and the picture was able to communicate to my conscious level that all was ok ..we have protected the memory and managed the memory and found a place to put the memory so it wont hurt us again. It was/is a excellent way of viewing the image from a safe distance …a way of disassociating oneself from the ugly thing in ones head…a way of turning the ugliness in life into something manageable ..maybe even beautiful. It was and is a way to cope. 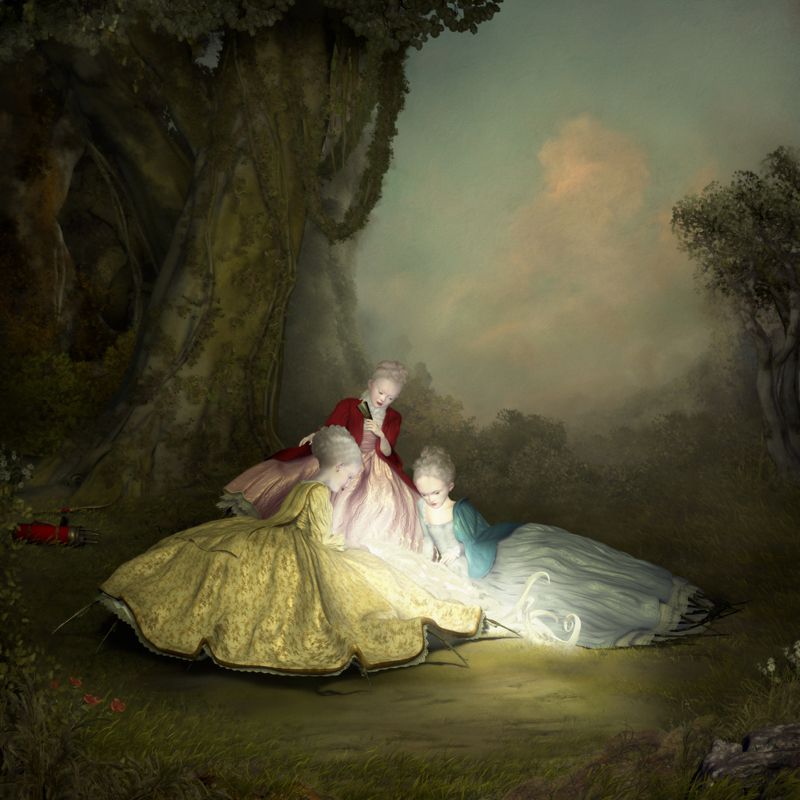 AM: I was interested to read you made the current career change based on a dream you had where your mother, who had recently passed at the time, encouraged you to pursue and art career. How did you make the leap to know that this was the right path to take when most possibly would have dismissed it as just a dream?  Have you had any other life-changing visions such as this?

RC: Yes My Mother and sister passed away very close to each other some years ago. It was a very difficult time and I had always had a form of sleep paralysis where I would wake and couldn’t move and during that time I will see visions and precognitive events … in other words the events I experience in this state and in lucid dreams quite often come true or are of a very spiritual nature. I wouldn’t have dismissed the event as just a dream ..ha! because it wasn’t a dream! …I am not sure what these events are but I have had many of them through life and many of them are related to events around death and for some strange reason I feel more aware than when I am awake. It’s a condition I am told that may be related to my dis-associative Identity disorder and its taken some time to feel at ease with the idea that spiritually and psycho therapeutically it all means something. I don’t worry about it much and I still think many people have this but don’t talk about as it can incite ridicule and some negative reactions in some people ….in fact for many years I thought every one had this but it was one of those things we weren’t supposed to talk about like having gas. I do believe certain life changing events such as this are very important to talk about though as I think we are all open to something I describe as the super-conscious and if paying attentions to such events can lead to a positive change in my life it might mean the same for someone else.  Sleep paralysis or hypnopompic and hypnogogic dreaming is being studied at the University of Waterloo here in Canada and I think the best way to approach these things is with mind open to the possibility that scientifically and spiritually they both have important meaning and might be more related than we care to think.