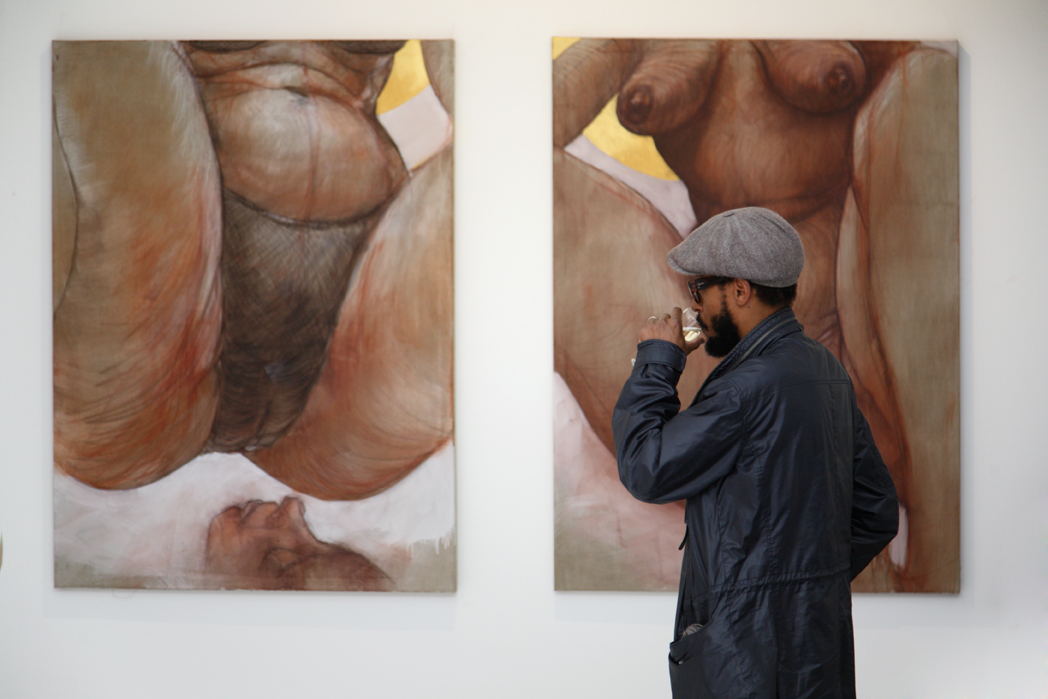 Earlier this fall, artist MODE 2 debuted a solid body of work entitled Offerings in Berlin’s Lucas Carrieri Gallery. The hardworking Parisian street artist is known for his distinctive and provocative style, and was able to take some time to share his thoughts with AM with in a candid and detailed interview conducted by Zaza Weissgerber. Topics touched on include the reasonings behind his work, his philosophy behind his portrayal of the female form, and much more.

Catch the full conversation after the jump.

AM: For this show Lucas wanted you to feel free to paint what you wanted, as Berlin is known to be a relaxed, free-minded and edgy city, extremely supportive of the arts and open for showcasing the explicit. Your paintings have always focused on the female body, but opposed to your past shows, this one is very sexy and graphic. How did it feel to be able to freely paint what you wanted for this show opposed to your past shows?

MODE 2: I tend to always paint freely for any of my shows, with the only limits in my mind being whether or not I can do it all on time for the opening, if I can afford all the material costs, and whether or not my subject matter can get me into legal problems such as obscenity laws. Contrary to what you’re saying about my past shows, I did one at The Dragon Bar, in London late 2004, called “A Matter Of Taste” (see the flyer), where the subject matter was more explicit than what I did for “Offerings”, with a more overtly sexual theme than the ambiguous nature of what I did at Lucas’ gallery.

I set my own limits, rather than letting the gallery decide. Theirs is the risk to take, on working out whether or not they can actually sell some of these pieces, which most people would be a little too shy about having in their house. If there ever was a limit to what I choose to paint, it would be those limits which would help me to find the right balance in my images, so that the audience would not feel in any way offended or turned off by them… 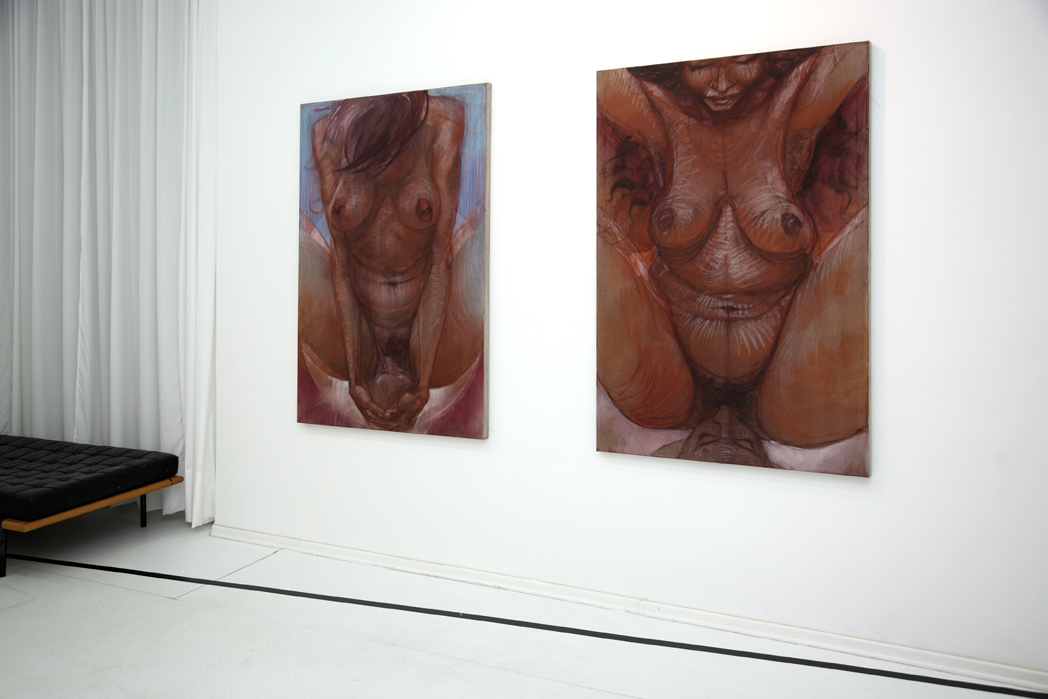 AM: You painted the women in your paintings appearing like goddesses, as they are significantly larger than the men making them offerings. The female body is rarely shown so graphically outside the realm associated with pornography. What inspired you to paint the women in these angles?

MODE 2: I have, as you stated yourself, always had a focus on the female body, and was known as the character guy who drew girls, on the writing scene; even though I was also interested in writing letter-shapes, just as much as the next guy. I have also painted the female body on very large scale, on different murals around the world, before even coming across stuff like Jenny Saville’s big nude paintings, or Botero’s paintings and sculptures. Pornography implies that you will see physical contact between two people’s intimate parts, and/or penetration of one kind or another; yet I don’t see that in what I do. I know that I go a bit further than some of what’s out there, but I still try to leave some space for the imagination and personal interpretation.

Paradoxically, I see woman as having been kept in an inferior place by the male members of society, while I try to somehow make their nudity seem more empowering; especially when we speak of this “goddess” role that she plays. We are carried nine months inside a woman, we are born from her, we live, and then we die. We must learn to accept this, though our technologically sick society keeps promising us that the next new invention will be the answer to all our ills. Man will never comprehend what it means to carry a life inside, and has therefore a somewhat different take on the value of life itself; wanting on one side to play God, by manipulating the natural order around him (usually to ultimately disastrous circumstances), or else striving for the impossibility of immortality, as he’s always been scared to die. Strangely enough it’s some of these issues which inspired me into making these images, and there is a bit of Goddess-worship in there somewhere; taking us back to a time when deities were more female than male, before Eve became the guilty one, and far away from those who wrote some holy books at one end, and resorted to excision, at the opposite extreme, in order to consolidate the power that they had over woman in society.

I also wanted to portray normal-looking female bodies; with curves, with drooping flesh here and there, and with body hair as well; what is not the standard of “beauty” these days. I don’t shave my legs or under my arms, and I don’t really have a problem with women having as much body hair as I do; though I must also admit that I’m not that much of a hair-bear myself. I’m just not a fan of the direction in which erotic imagery went, since the mid to late eighties, where body hair gradually disappeared, and the airbrush then computer got to work on smoothing any naturalness out of a woman’s skin.

These are not specific points that jump to mind for many, when looking at my pictures; but they hang there somewhere, in my subconscious, adding a certain feel and dimension to what I do… 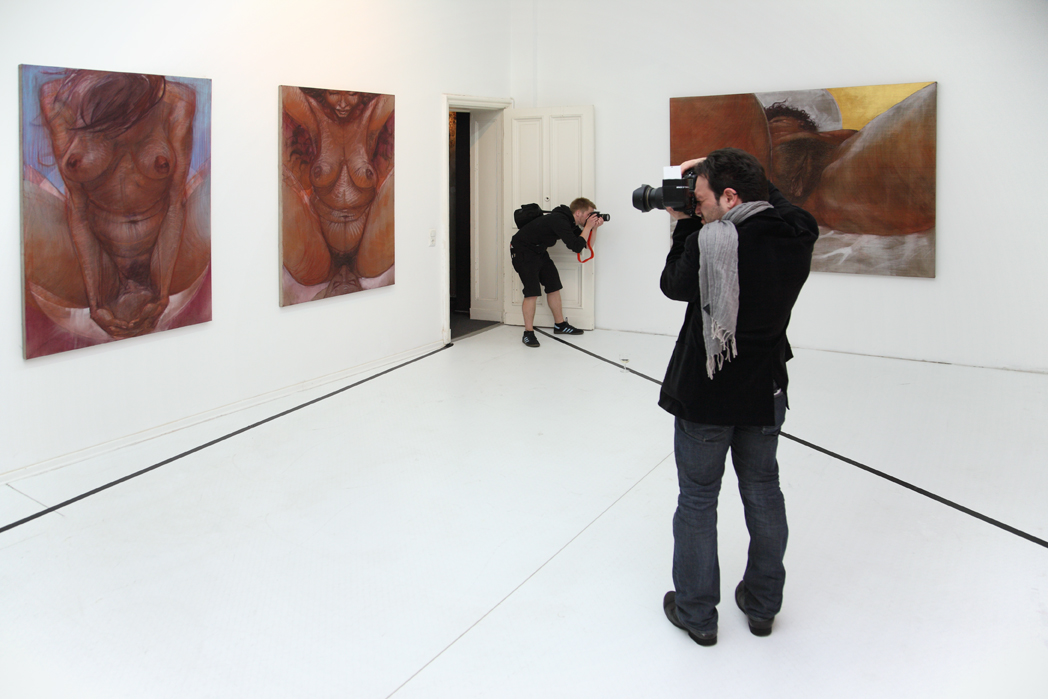 AM: What effect do you personally wish and think this show has on the spectator?

MODE 2: I only wish for the spectator not to turn away, or to close his or her mind; allowing him or her to somehow be absorbed by the image, like some particular form of reverse-birth, and looking back (or forwards) to where we all came from. These are very loose parameters around my images, and maybe more to do with emphasizing the atmosphere of the piece, rather than acting as strict guidelines or boundaries. What interpretation the spectator then goes on to make is totally personal and subjective; as well as often being more interesting than my own; which is why I also enjoy hearing their interpretations and explanations of what they see and feel. That is very enriching and therapeutic for me, and helps me to refine my language further still.

Ideally, I would be happy if the atmosphere in the room would be such that it could provoke debate between the sexes, while at the same time negate the eternal power-play that man has imposed in his relationship with woman, throughout our long history on this earth. 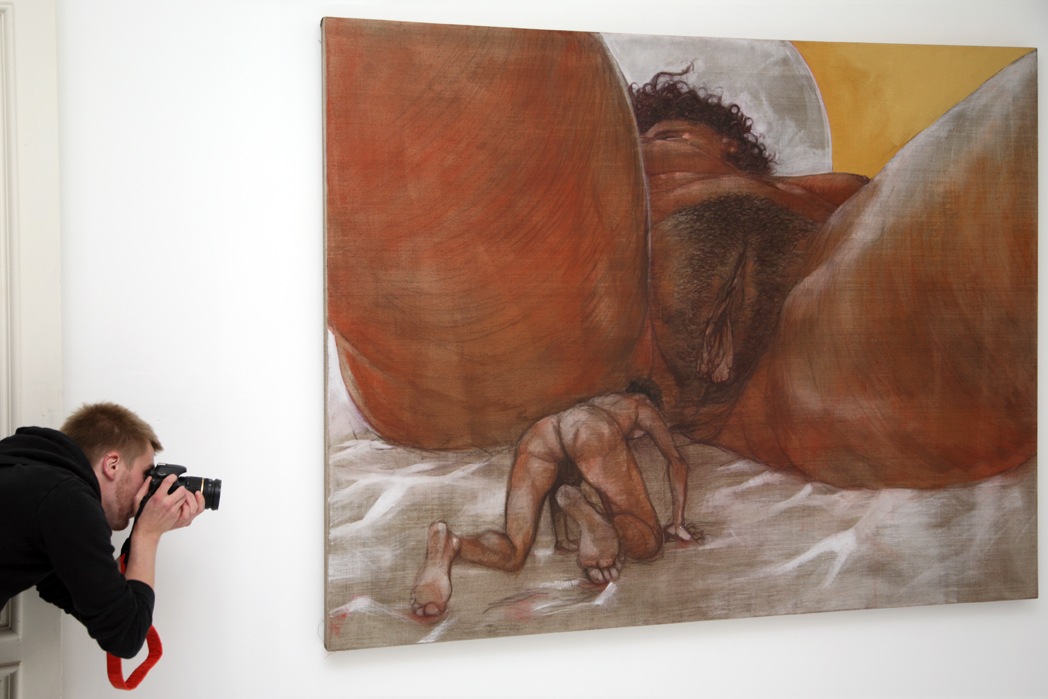 AM: Did you work in Berlin while preparing for the show? If yes, did it make a difference in producing your work opposed to London or Paris?

MODE 2: I usually get to the city where I have a show, and prepare all the work there, as I never really had a studio. “A Matter Of Taste” and “Reality, Fantasy, and The Web” were produced on site, days or a week or two before the opening. Thankfully, for “Offerings”, I managed to get hold of a space in which to prepare the show, without having to paralyze the gallery for a few days, as is often the case with me.

I’ve traveled a fair bit in my time, and painted in most of the places where I’ve been; so there’s always a different atmosphere in every neighborhood, and every city. Along with my earlier years painting outside, it makes us more adaptable any given work-space we have the chance to grab. 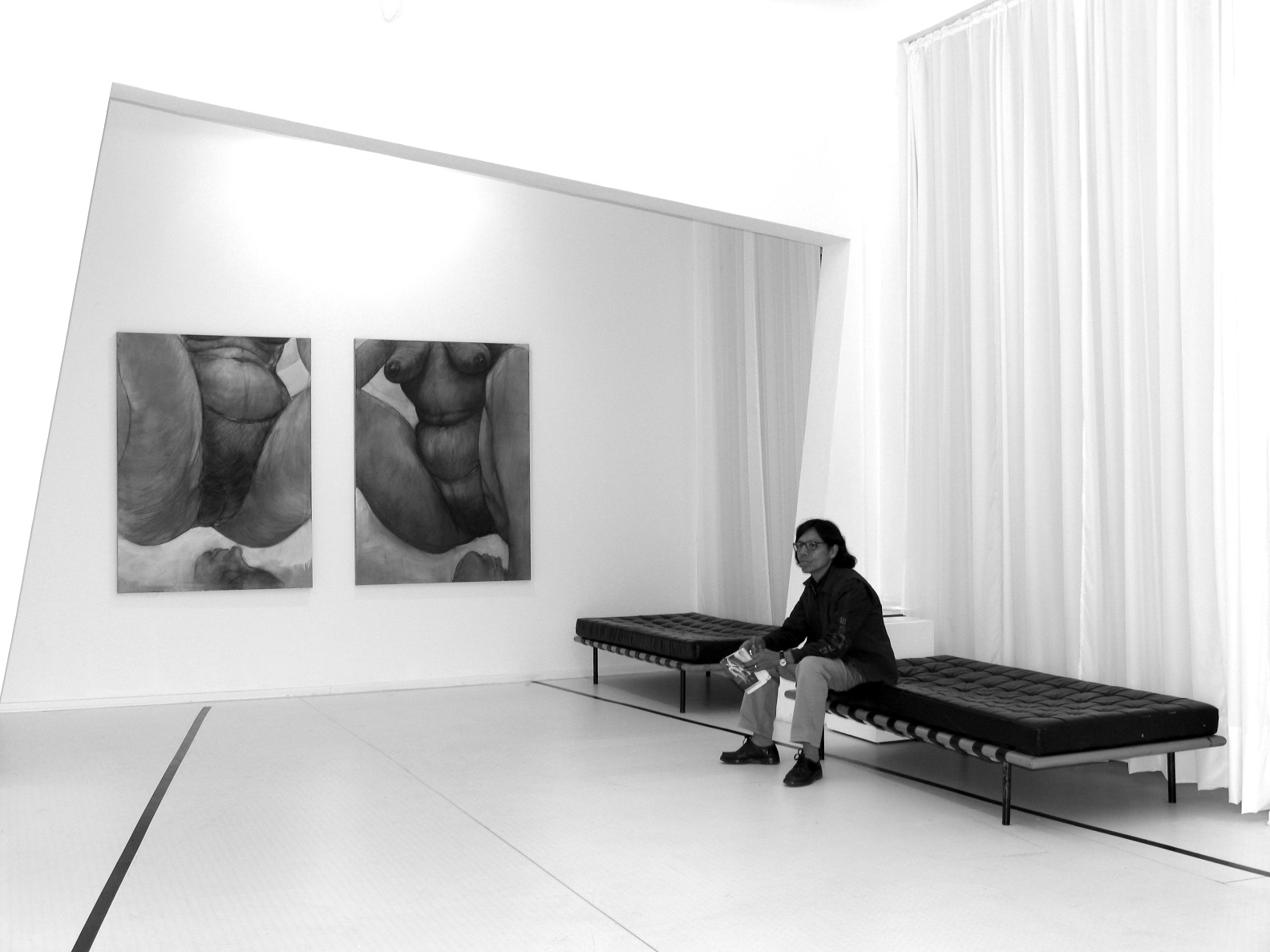 AM: When you paint in general and depending on the project, do you try to attract a certain crowd?

MODE 2: I don’t try to attract any crowd in particular. Unlike some “artists” that I’ve had a chance to meet in my life, I just paint for humankind as a whole, and the only segregation that I have to practice once in a while, is that of clearly drawing a line between images that are for everybody, and images that would not be suitable for children.

When I worked on cross-community workshops in Belfast, after the ceasefire in the late nineties, or when I did a painting in the town of Omagh, celebrating the lives and aspirations of those who died there in a car-bomb in ’98, it was always very important for my visual language to be somehow all-inclusive, and not have some factions of either community thinking, “This is not talking to me, it talks to the other lot.”

I have always strived for this bridge-building between people, whether it be between two individuals or many different communities together. Obviously I will never be able to “please” everybody, but spending my life heading in that direction does not seem like the wrong path to me, though some critics would say that this is incompatible with producing art itself. Away from fashion, and other soft forms of identity crises, we are deep down just regular human beings; and it’s this fundamental lowest common denominator whose attention I try to somehow catch. 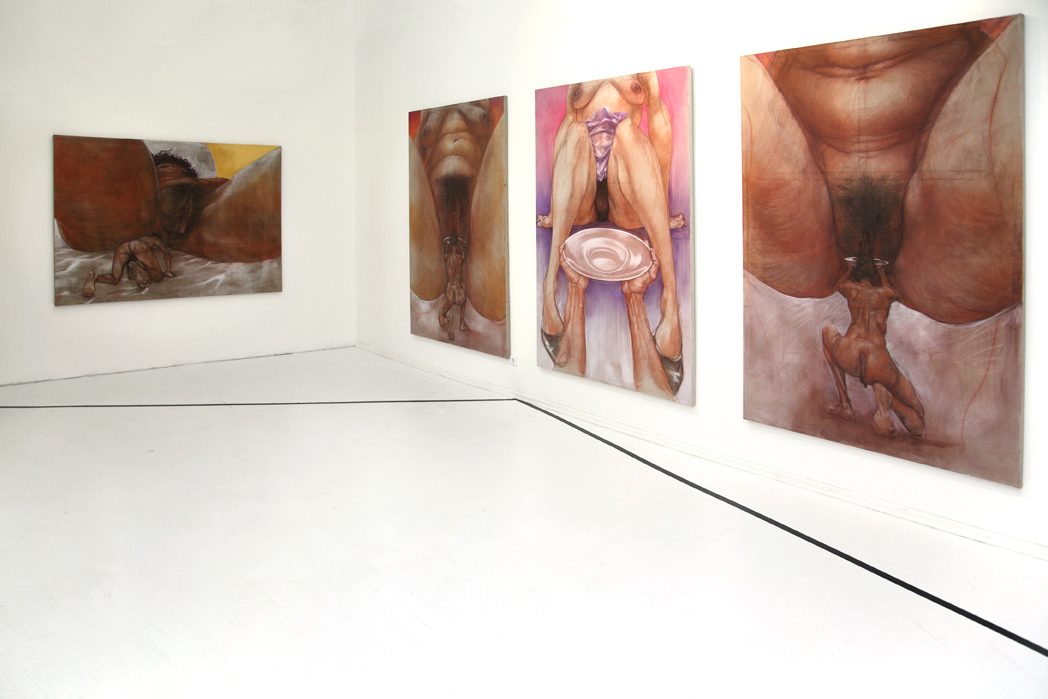 AM: What are you working on currently / What’s the next thing you will be working on?

MODE 2: Right now I’m struggling along, trying to organize my participation in a show in Nantes (northern France) called “Faire Le Mur”; a 3m X 5m canvas which still needs to be mounted on stretcher bars, hotel to book, materials to buy and so on. I hopped from the opening at Lucas Carrieri on the 23rd of September, then got straight to work on the following show “Who Sold The Soul?”, at Galerie Issue in Paris; with no breathing time in between.

It’s a real stress to have to handle, but, at some point just before this next show opens; I may just be able to stop and breathe, and understand what I just did the past few months. I will take time out for my family after that, while my sketchbooks will remain in my pockets or in my bag, as I explore the next directions that my eyes, my mind, and my hands are taking me in…

AM: Thank you for taking the time to talk with us.