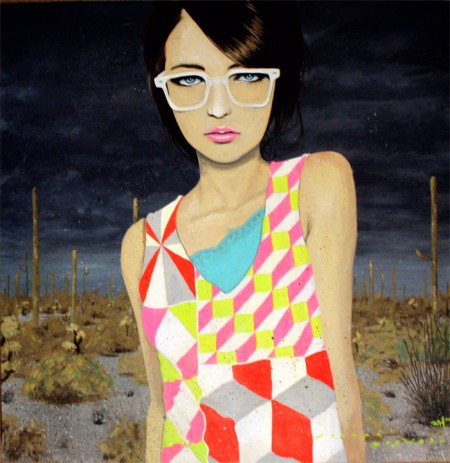 Joseph McSween, better known as 2H, opens his debut Los Angeles solo show this Friday, March 27th at Ronin Gallery. 2H speaks with AM about the artistry behind his alluring female portraits, the epiphany that led to his dramatic growth as an artist and as an individual, as well as future plans and projects. Check out the interview after the jump… 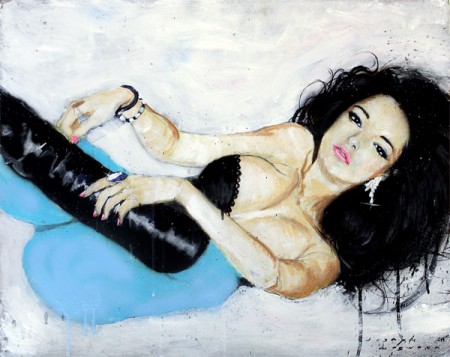 Arrested Motion (AM): The women in your paintings are fascinatingly intriguing. What in particular are you trying to capture in your work?

2H: I’ve always painted girls as my signature character whether in public or in the gallery. Lately I’ve been told from people that they really connect with my paintings through the eyes of the piece. I feel the eyes are the most important part of my paintings because that’s where the mind is automatically drawn to when first viewed. It establishes an instant intimate relationship between the viewer and the painting. Therefore I usually render the eyes with the most detail so you can see the soul of the model even if she is physically not material. I also use the setting, colors, movement of certain elements like the hair to express the present mood. The use of neon colors in some of my newer paintings automatically sets the painting in a modern element, where as the old masters didn’t have the same color options available to them. I feel it’s important to set yourself apart from history with originality of style and hope to push the boundaries for myself. In doing that maybe I can then change things for the future of art as well. 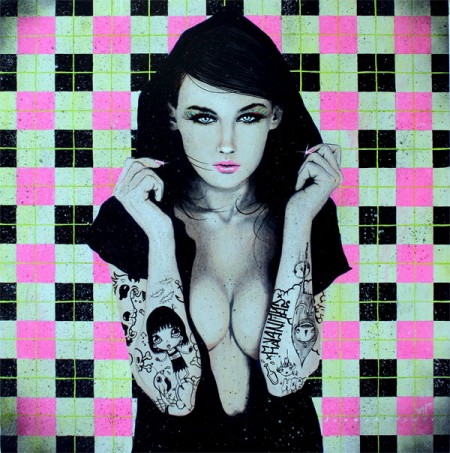 AM: Mid-2008 saw a huge evolution in your style and was a definite leap forward for you as an artist. Was there a significant event that prompted this change?

2H: Around mid-2008 I had an epiphany of sorts with myself as a person, and as an artist. Things weren’t developing for me as fast as when I was younger and more excited about the art world and life as a whole. I was caught in the moment of tagging, drugs, booze, skating, and girls. I started to feel the opportunities that were flowing my way started to slow because I passed them up, or just took them for granted. Was it just a general recession of the art market or could it be that I wasn’t following my path and dreams to my fullest potential? I think it was the latter. I opted to move away from living in downtown Seattle for the rainy winter. I got a studio set up centered around family in Texas and proceeded to give up drugs, booze, girls, and partying for moderation. I spent the last year painting around my father who is also an artist. So now I worked to the point where I just wake up, paint, and then paint some more. It becomes addictive, to the point where I wouldn’t feel great if I didn’t do it. Even right now i have two panels drying on the floor. Here I am. 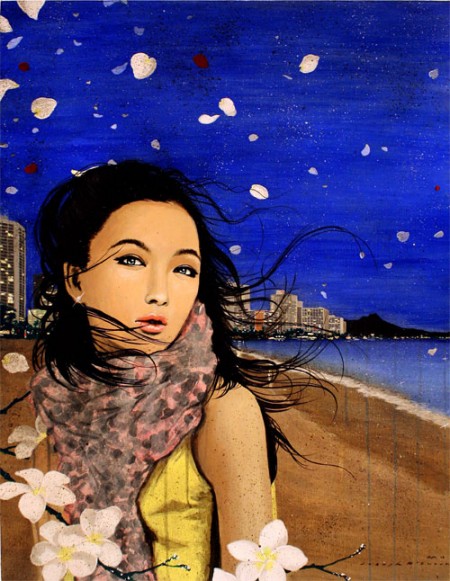 AM: We understand that you’re a self-taught artist. When did you discover your passion for art? How did you develop your style and technique? Was the lack of formal training beneficial in any way?

2H: I’m completely self taught. People don’t know this but I dropped out of high school to make art. Haha. I’ve done well teaching myself. I didn’t really realize my passion, I guess it was just kind of a natural progression of the way I thought things were supposed to be. Both of my parents are artists so I grew up trying to keep my crayons inside the lines. There were some key moments along the way where people would tell me I would be able to do big things if I utilized my talent, so I just try and do me and let the pieces fall into place. If I think about something enough it just kind of happens. It kind of weirds me out sometimes if I stop to think about it, like it’s all meant to be for some reason I don’t fully understand yet. A universal awakening of consciousness or something. Haha. I think in some ways the lack of formal training was beneficial, although I dated some art school chicks and they hated it. Plus I’m not in debt to anyone. I think it would have been cool just for networking purposes, but if you can’t do that in the real world you’re not going to get far. Networking is important because I would like it if people liked my art while I’m alive and not just when I’m dead like Henry Darger. Oh yeah, and i really enjoyed going to Cornish and the Art Institute in Seattle and stealing all their art supplies. ; ) 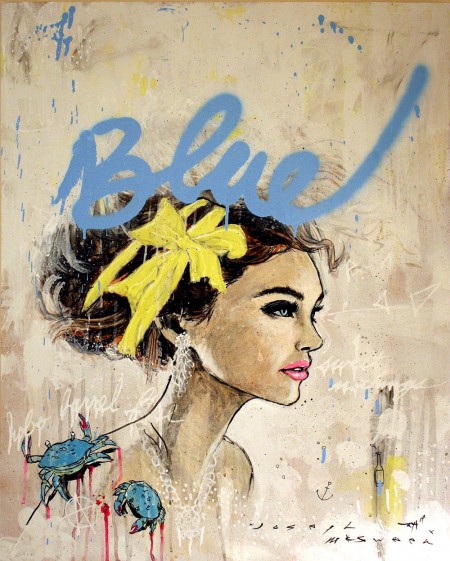 AM: What other projects do you have lined up for 2009?

2H: After the solo show at Ronin Gallery on Friday, I’m going to go over to New York next week and check it out and try to find some new galleries to work with. Andy Howell recently asked me to be a part of his company ArtsProjekt so I’m excited to be a part of that crew and work on some projects with them, mainly skate decks, clothes, etc. I’m also curating a show for Ronin Gallery and will be working with them on projects. Probably do some projects with my crew Pocket Full of Monsters as a collective and kick the recession’s ass. Parskid and I are going to do a West coast road trip this summer and paint trains and try and do some shows along the way. I’m also going to work on some new commissions, and am going to do some new paintings for my friends over at Thinkspace Gallery. Other than that, I’m open for anything that comes my way.

AM: Thank you for the insight into your art and background. We’re looking forward to the show on Friday.