Our latest interview is with artist Adam Feibelman (aka Adam 5100), who hails from New Mexico & has been working in San Francisco for the past sixteen years. His most common medium and technique involves enamel paintings utilizing stencils & stitched paper stencil collages. Adam has a solo exhibition opening tomorrow night at San Francisco’s Guerrero Gallery, so AM enlisted his peer & friend Andrew Schoultz to find out a little more about Adam (including a commission for the new 49ers stadium).

Take a look at the Q&A’s below… 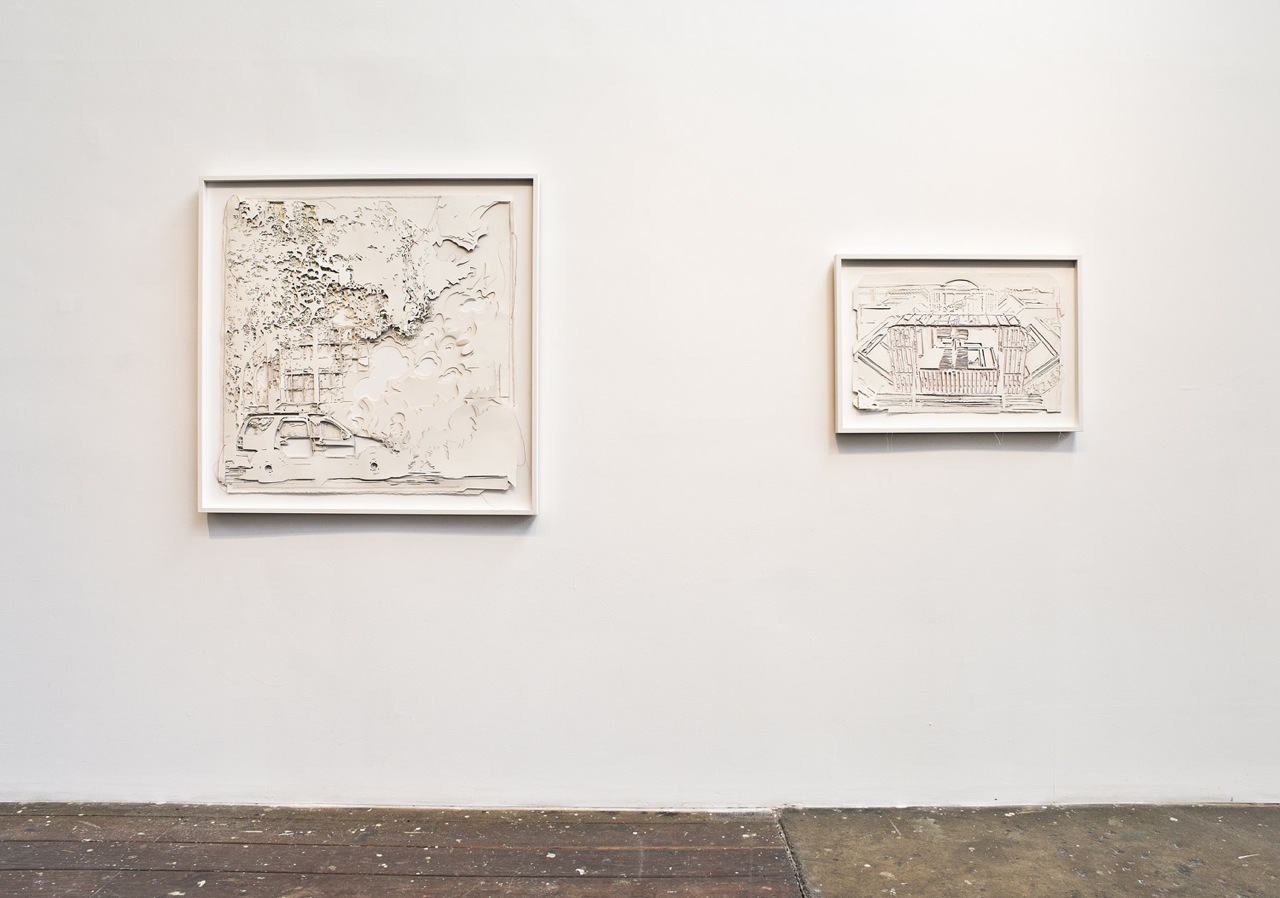 Andrew Schoultz (AS): So, Adam — I think it’s first best to talk about your background and where you came from?

Adam Feibelman (AF): Alright, I am originally from Albuquerque, New Mexico, where I was a snot-nosed hoodlum. As I was getting closer to either failing out of high school or graduating by the skin of my teeth, my mom had the insight to push me in the direction of art, because it’s really all I was doing. After getting into art school, I moved to the Bay Area when I was eighteen to attend CCAC (now CCA), where I studied illustration and printmaking. It was really at that school that I started really loving art; how broad the ideas could be, for such a narrow hallway, and the challenge of making something from nothing. I then bar-tended for a long time, in order to support myself after graduating, using any extra money to fund my own art. It was basically years of art all day, then at work all night. 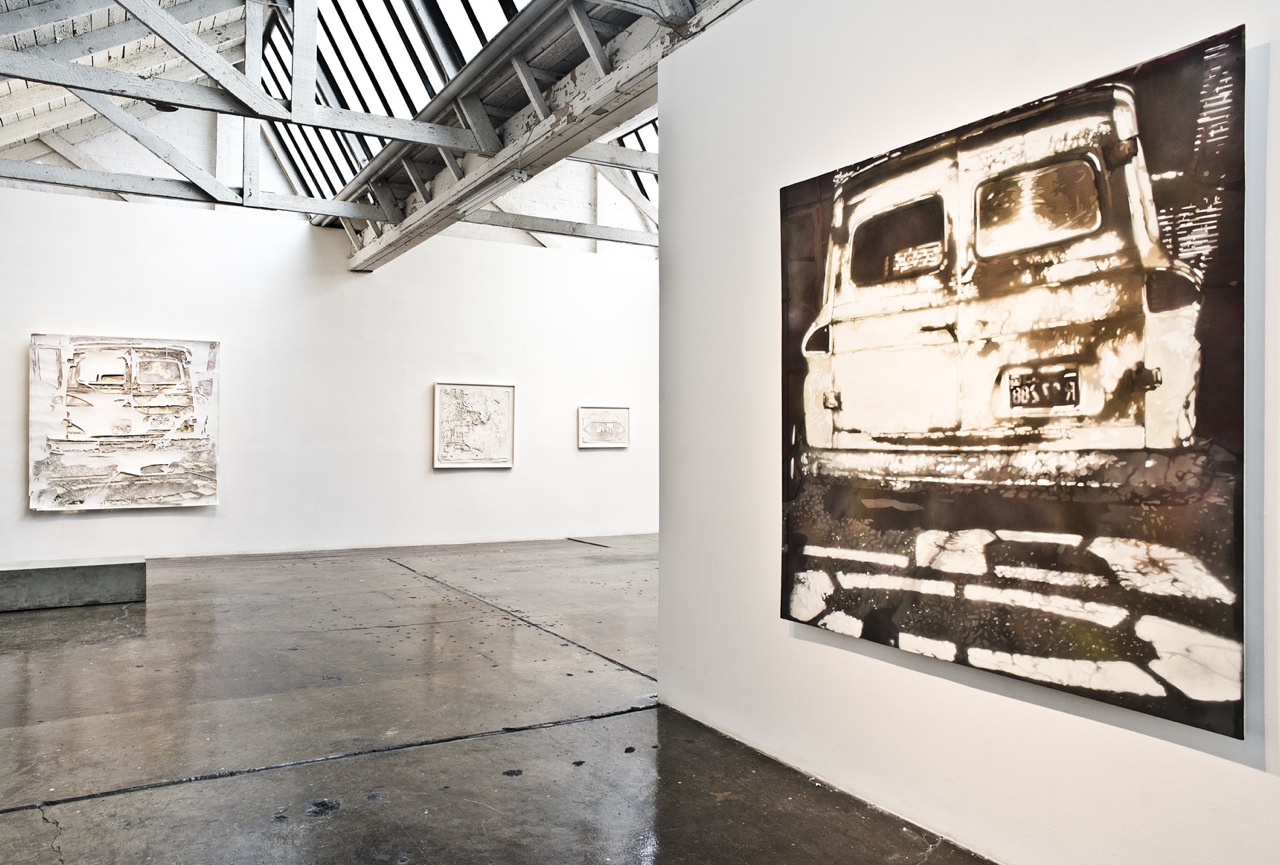 AS: You have an upcoming show at Guerrero Gallery here in SF. From my view point, this is your first big solo show in the city; how would you describe your approach?

AF: Yeah, this is definitely the biggest show I have ever done, in terms of how much work is needed to fill such a perceived large place (Guerrero Gallery). I feel like this show is a culmination of all things to the best of my knowledge. All the things you learn from having lots of smaller shows really come into play, as well as the learning curve of trying to push to a different level. Basically, the approach has been to just keep my head down and work, try to look at things objectively, and think about what I am doing and why. 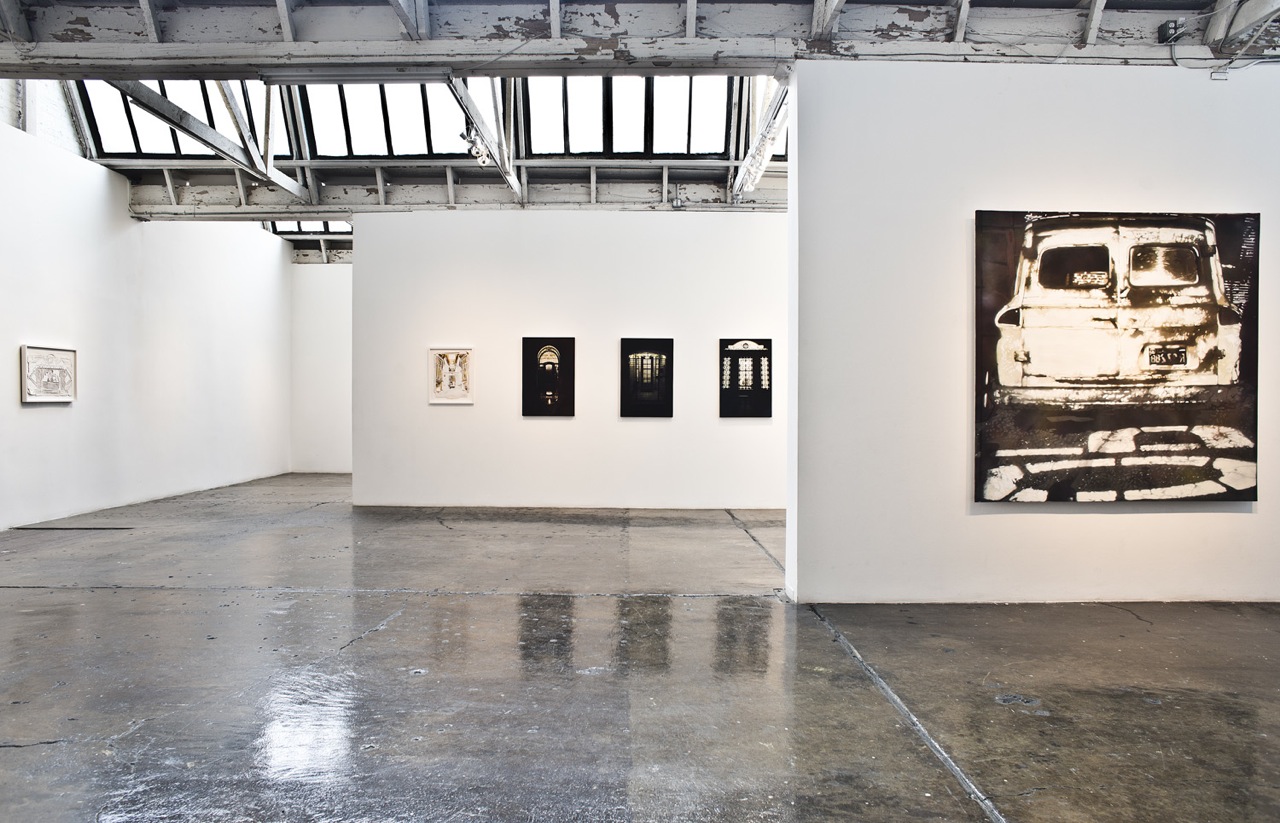 AS: You come from a printmaking background. Now you are making stencils, and also making works out of the layers of cut paper (the actual stencils) by sewing them together. Do you still consider this a form of printmaking? In printmaking, generally speaking, there are editions and multiples, by spraying the stencil once, and then essentially retiring the stencils by sewing them together, and making another piece, this possibility is eliminated; can you explain this a little? What is the reasoning? Seems like the purpose and reason for stencils is to be able to spray paint something intricate over and over efficiently and in no time at all, yet you are choosing to use this process to make single originals…

AF: I do consider my self a printmaker of sorts, and yes what I do is a very old technique of printmaking (pochoir printing). The reason I don’t make multiples is because in my head I am a painter, and the stencils are a way to the means, and with that mentality I don’t want to get bogged down in repetition. It’s about getting that one just right, and thats a painter, right?! 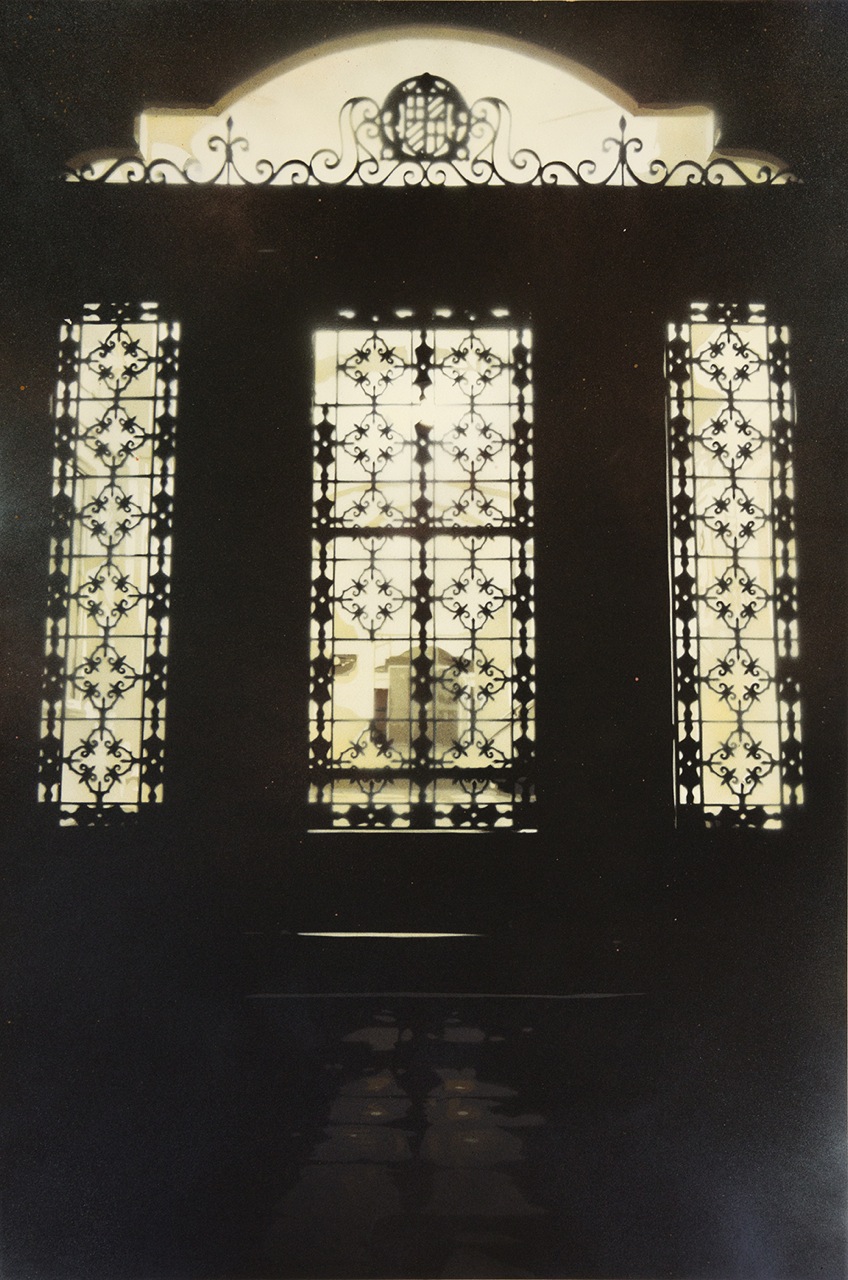 AS: How would you separate yourself from other artists that use stencils? Are there any other artists using stencils that you are excited about? Do you consider yourself a “stencil artist”?

AF: I made a conscious decision some years ago that my work didn’t fit into the category of “street art,” because in my head, street art is on the streets, just like graffiti is illegal. That’s not to say I am adverse to painting a mural, but I am not a street artist – where I feel some of my contemporaries (of similar technique) really try to push to that categorization. I wouldn’t even call myself a “stencil artist.” I think I am just an artist on a journey, and the technique just lends itself to my heavy hand. Then in the end, I think the way I approach my process leaves itself open for growth. They (the stencils) might some day not be usable as stencils. I would not be surprised by that, and look forward to what that might or might not be. 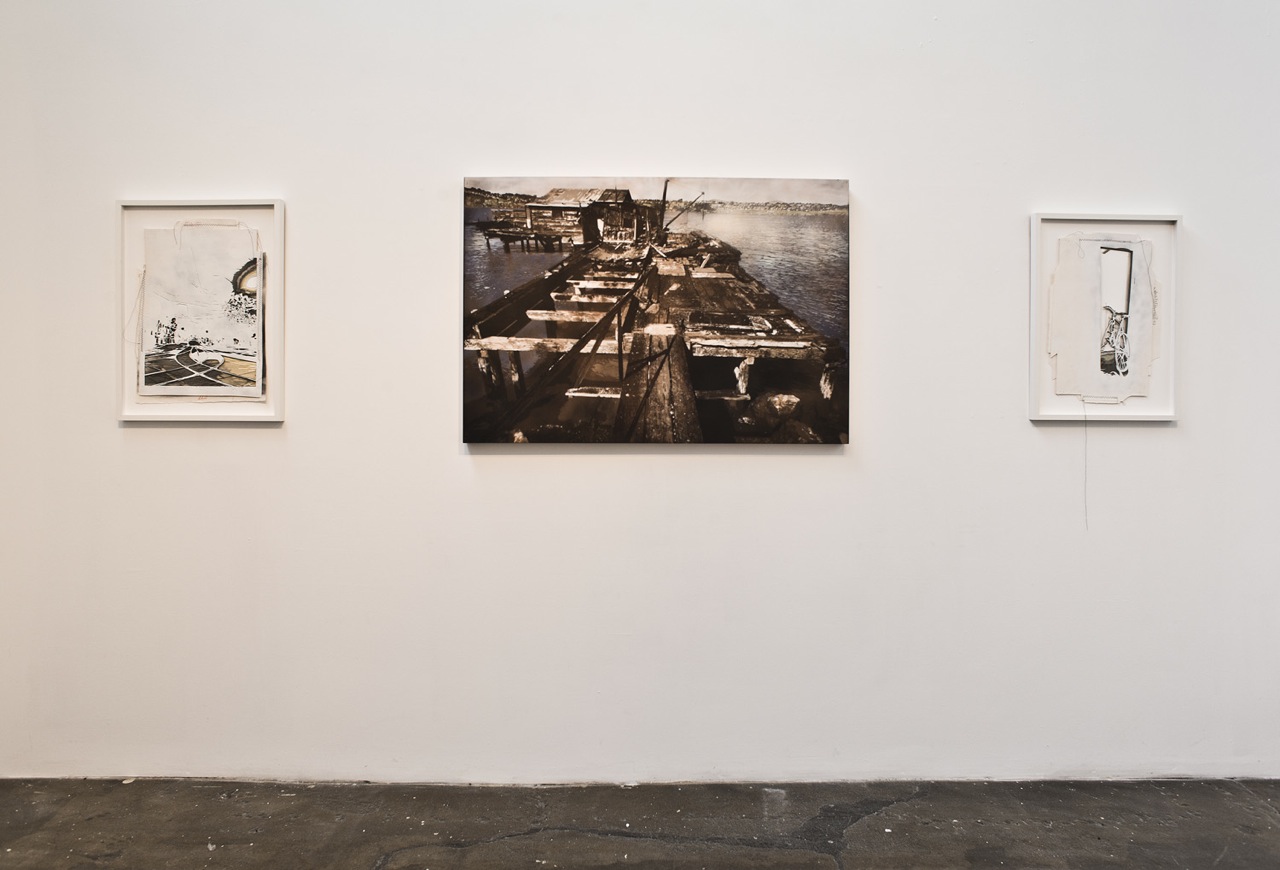 AS: What are you influenced by as an artist? People, things, etc.

AF: I’d say influence floods in from everywhere. From the beginning of my process when I am taking the photos, I have a motto “what would Robert Bechtle do.” Then there are the friends, other artists, the city, movements of people, news, science… It’s a crazy time to be alive and I try to stay as wide eyed as possible. 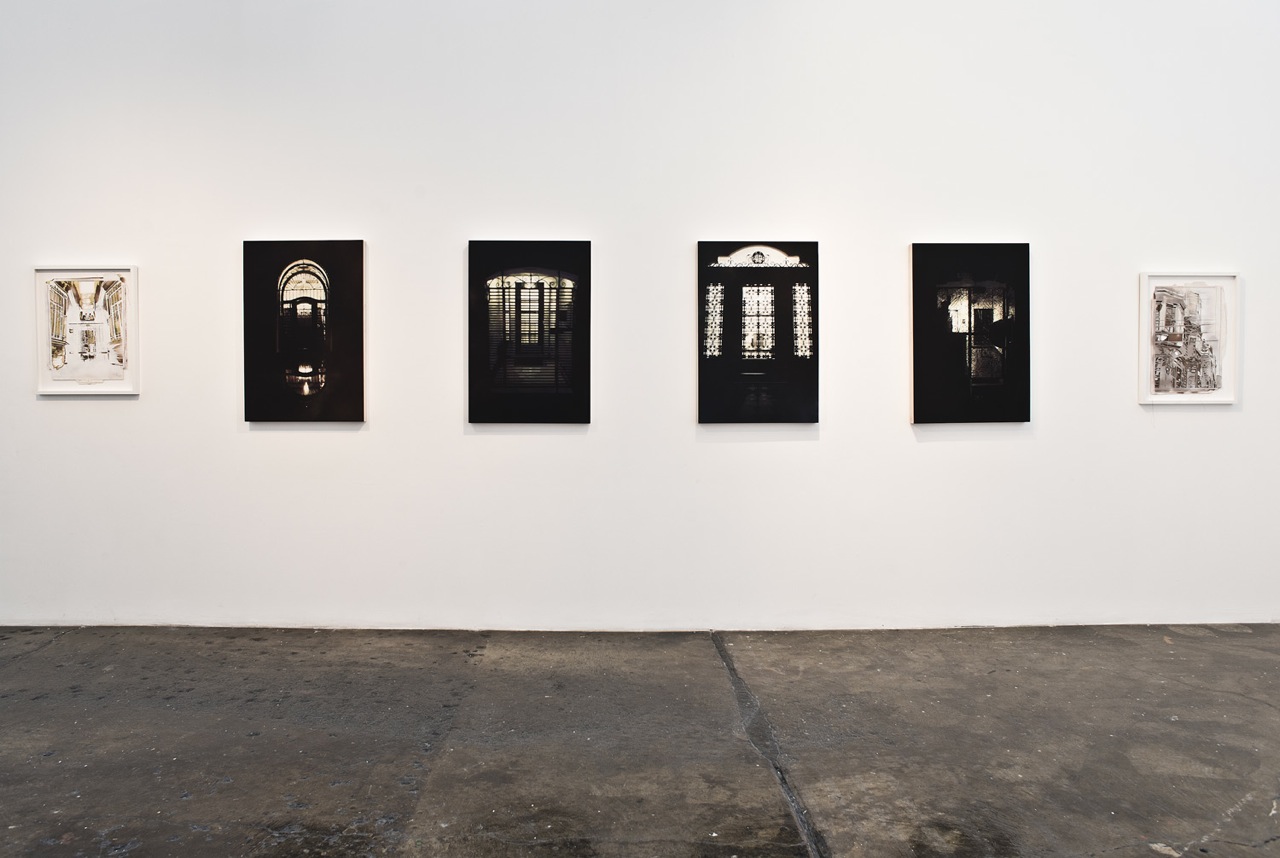 AS: I know all of your work begins with a photograph. Can you describe your process, start to finish?

AF: First, I take the photo, enlarge it, then use that as a template to separate the tones by eye. With a knife, I remove the darkest shapes first, so they are generally big broad chunky shapes. Then with each subsequent layer I remove the next tone up on the scale, further refining the big shapes with every step. Each step is its own layer. These days, now that the final collage is in mind from the very beginning, I also remove a lot of material that actually has no use for the painting as well. Once the stencil set has been cut, I paint them on to a wood panel one at a time, thus putting the photo back together as a painting. Then, I take the stencils, with the idea that I want to expose as much information in them as possible, cut them apart again, organize them, and sew them up. 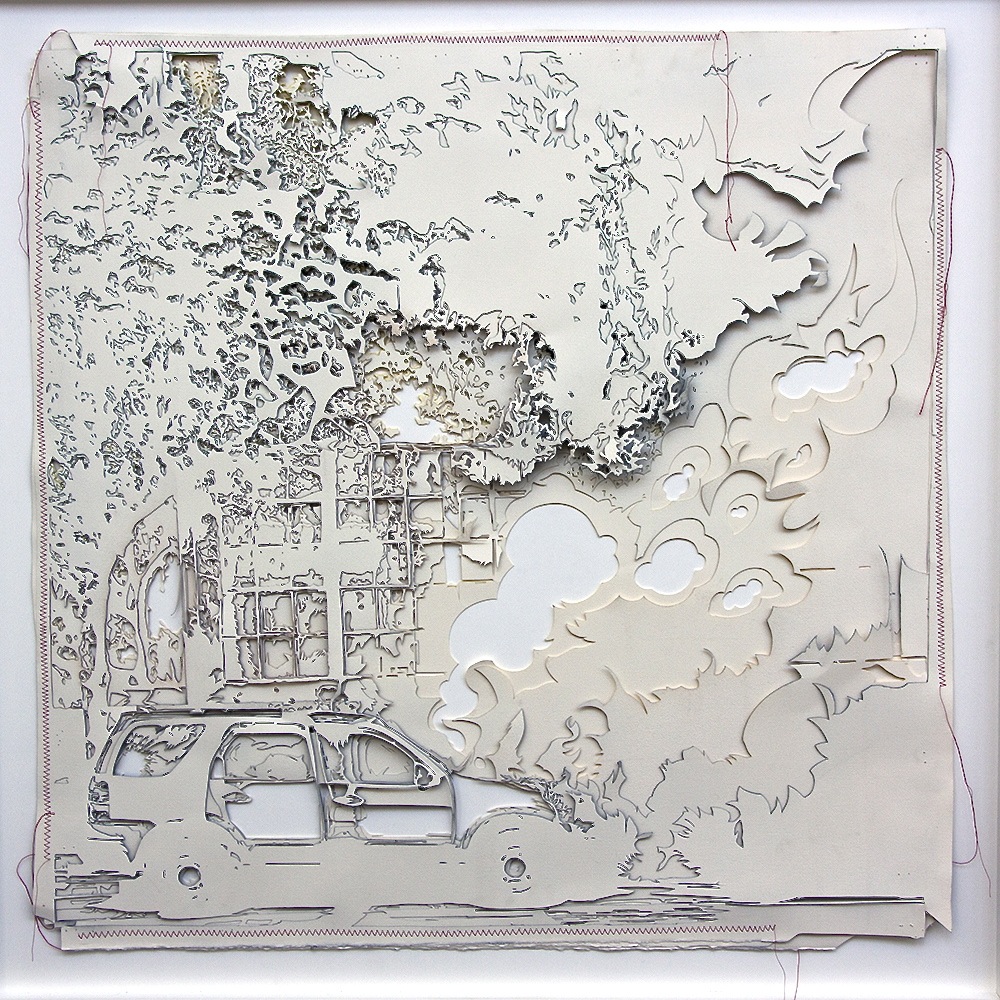 AS: In my own opinion, there is a very industrial feel to much of your work, even in your depictions of nature… is this intentional?

AF: I can see that. The process is fairly ridged in some respects, as is the enamel I use. The industrial feel is intentional because of the tightness and control I like to keep, but as more of my experimental techniques go into practice, I think that feeling will dissipate due to loss of undetermined amounts of control. In the show at Guerrero, there is a six foot piece that I think is a break in my personal paradigm. 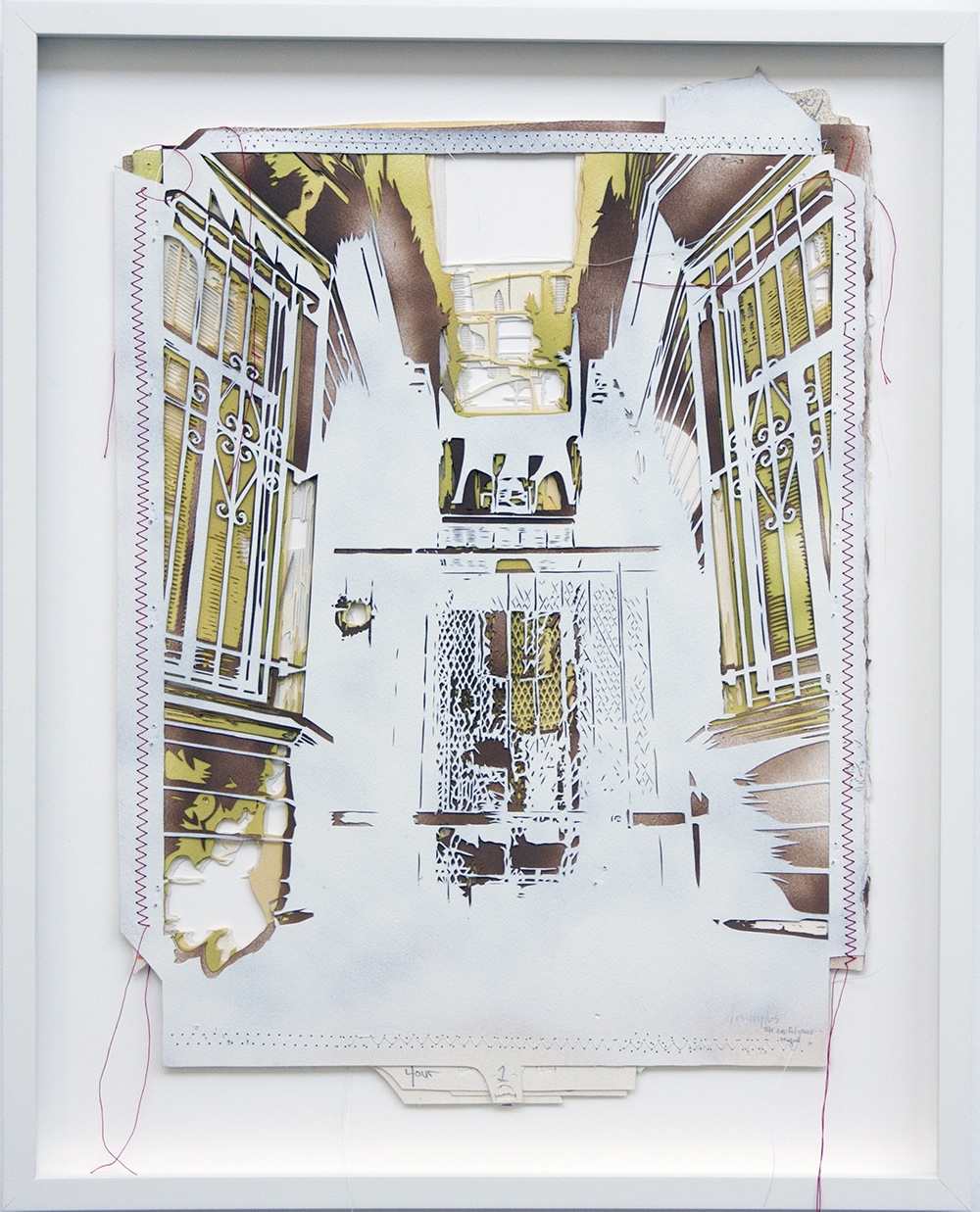 AS: You hand cut all of your stencils. In looking at how intricate they are, I can tell this is a painstaking, time-consuming, and physically-demanding task. Why do you prefer hand cut versus, perhaps, having them laser cut?

AF: Laser cut or plotter, to me could be useful in some instances, but in terms of what I do on a day-to-day, I enjoy figuring out how it will work, how to tuck certain bridges behind the next layer. I think if you do it by hand you learn lessons that will guide future ideas, where the problem solving aspect might be a personal breakthrough. Metaphorically of course, if you are sitting in a car doing 60 mph, you are going to miss a lot of things that the person walking will discover. And I’m just not in that big of a rush. 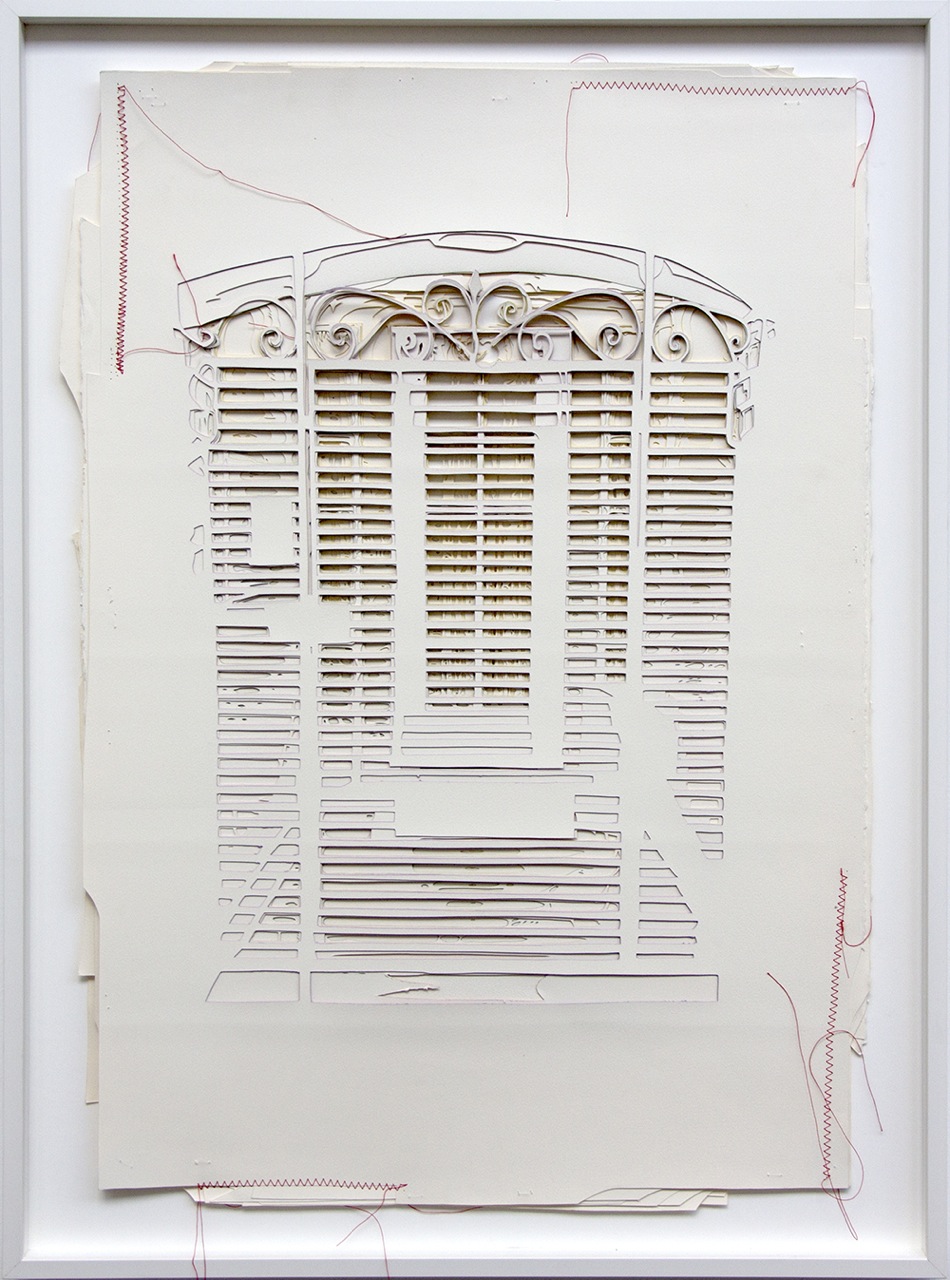 AS: Any future projects or plans your are excited about?

AF: I am super excited to be doing a commission for the new 49ers stadium. 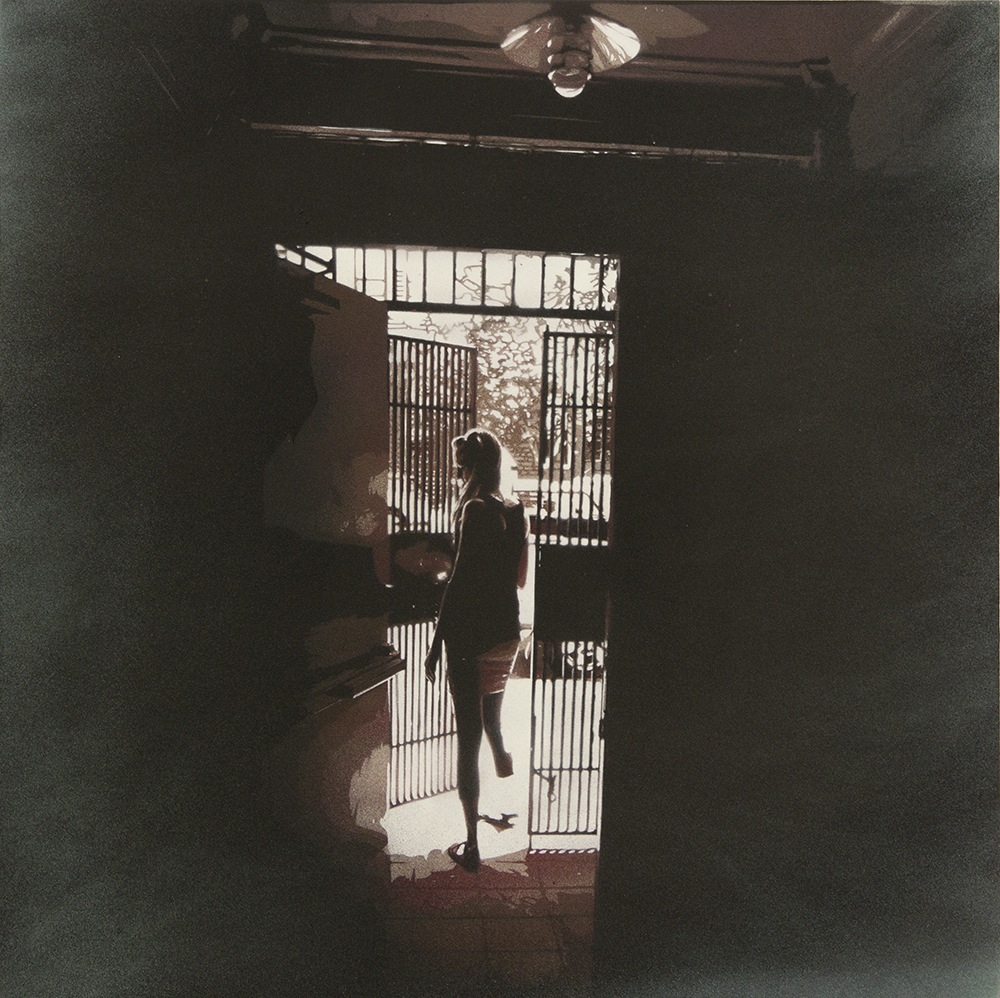 AS: If there was one thing you would hope for a viewer to take away from your work, what would that be?

AF: I guess ideally I hope someone would walk feeling activated, stimulated, and affected.

AS: Any final words?