After an interview with Ray Caesar back in 2011, we caught up recently with him again to talk some more about his art, his inspiration and his method. The opportunity presented itself shortly after the October 3rd opening of Truth, Light and Matter at Gallery House in Toronto, Canada – an unusual display space whose premise is to deliberately partner with galleries around the world on behalf of the artists. Take a look at our Q&A’s below… 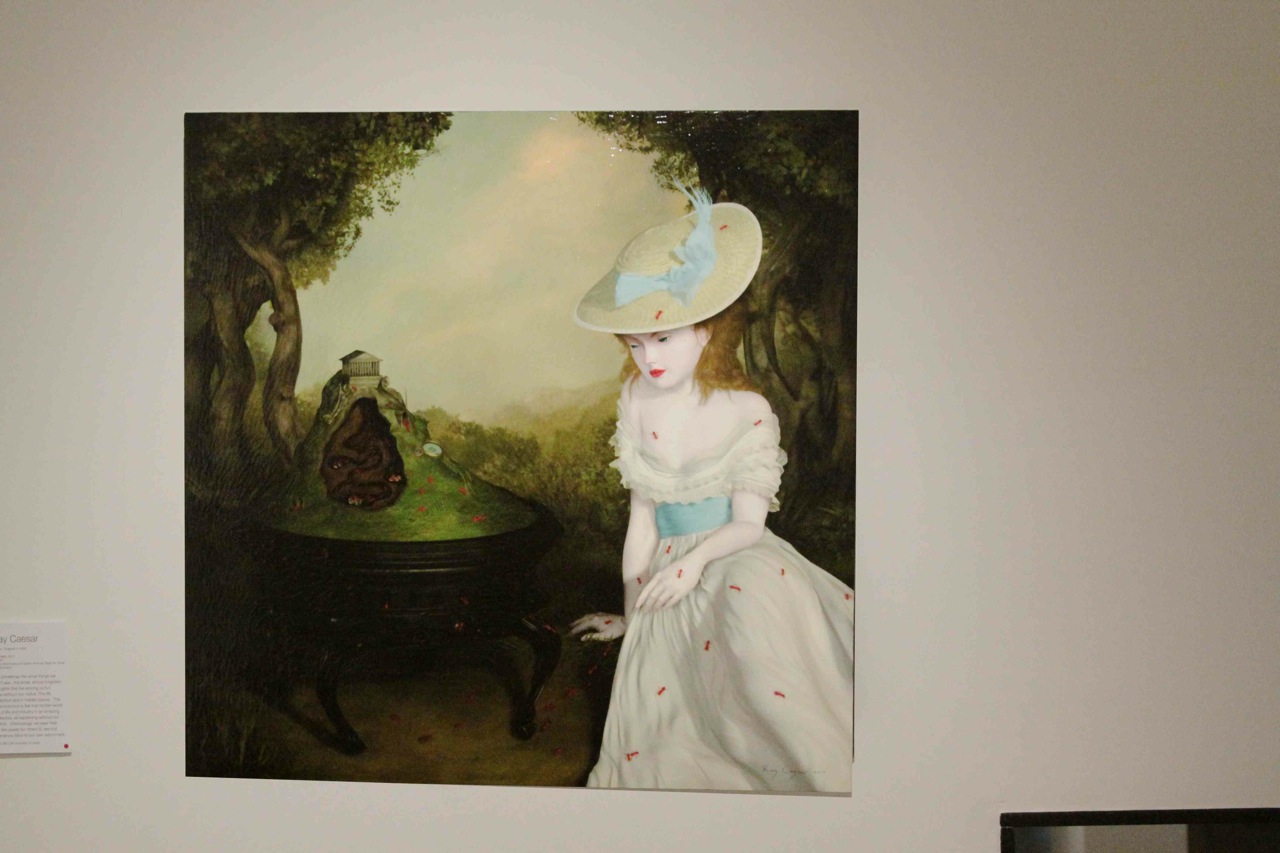 Arrested Motion (AM): During previous interviews, a lot has been written about your time working in a Children’s Hospital, your traumatic childhood and how your art started when you lost your mother and sister. Can you tell me about the therapeutic effect of creating art for you?

Ray Caesar (RC): Making pictures has always been a way for me to communicate from my subconscious to my conscious mind – I did this as a child without even realizing what I was doing. It was also a way to escape from a difficult situation and create a world that was a happier and kinder place, a kind of sanctuary. I found over the years that any difficulty was alleviated by drawing the situation and dissociating the experience to paper. In many ways, it is like writing a visual diary and once we have put our thoughts and feelings to paper or to a hard drive, we can calm our minds and then we are able to cope. I believe the mind uses a kind of external memory to displace difficulty and combined with a form of creative energy, the dissociated residue of images or words becomes “Art”.  We do the same with “Music” and “Movement” and any form of creative expression as I believe it is in our nature to turn the worst of things into the best of things. 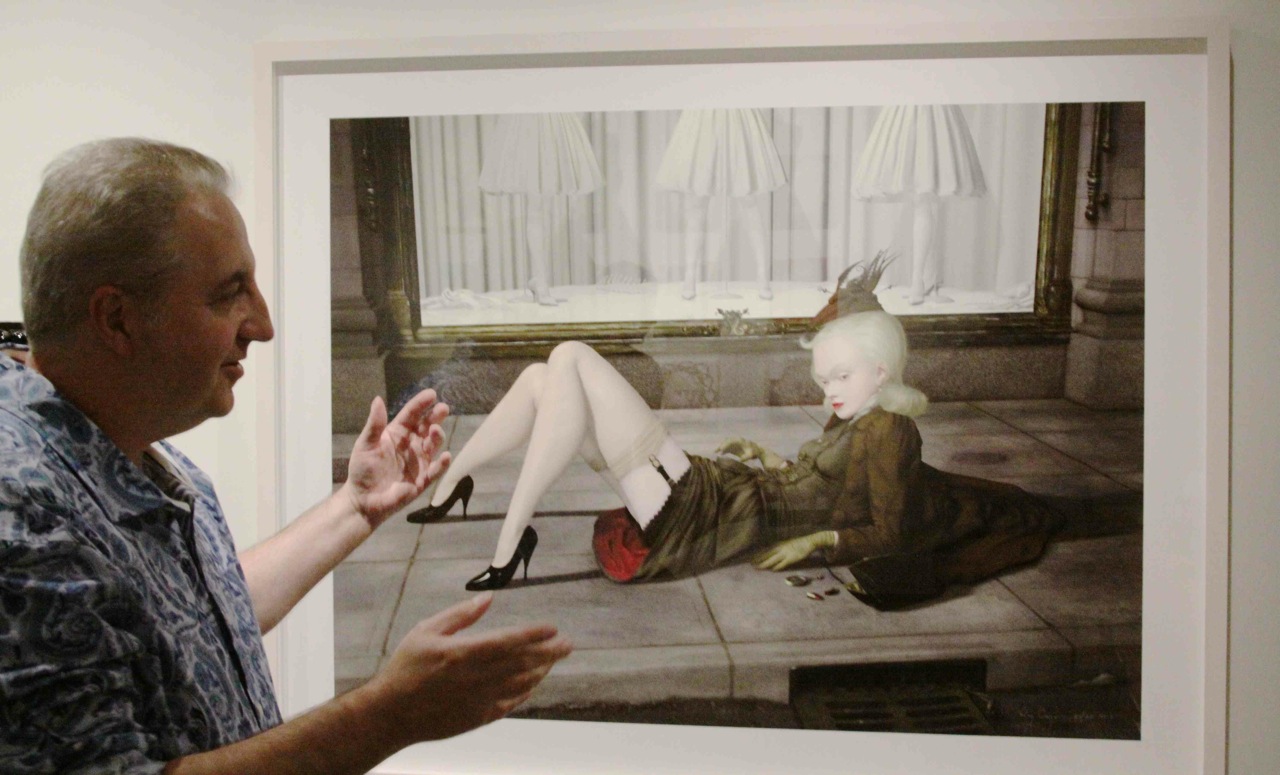 AM: Does your art occur in its own universe?

RC:  It is a separate reality, with distinct characters and settings. Some characters are girls, some are boys, and some have mixed genders. We all have some male and female points and counterpoints in us such as the anima and animus. The same characters and environments often make appearances throughout my work. Every piece is also partly a self reflection of my mind performed by my little cast of characters. When creating a picture, I approach the process like I am making a perfume, putting in a mixture of questionable ingredients. I put in elements of humor, horror, sexuality, darkness, kindness and joy. Some pieces also have a hunter/prey component, which expresses an emotion of  attempting to recapture a lost innocence, or of the power that a prey has over the hunter.

A lot of the pieces include imagery from classic art works, sort of nods to some of my favorite painters and their works. There is of course symbolism – for example, tentacles being from creatures of the deep are ways of expressing things from the subconscious, those things beneath the mind’s awareness. Tentacles and other deformities also are partly inspired by my father who had severely deformed feet.

* Ray and I spoke a lot about his art, the history, precognizant dreams with his mother, which was all absolutely fascinating.  The stories are already the 2011 interview which I highly recommend reading. Moving on, we spoke a little about his philosophy and method of creating art. 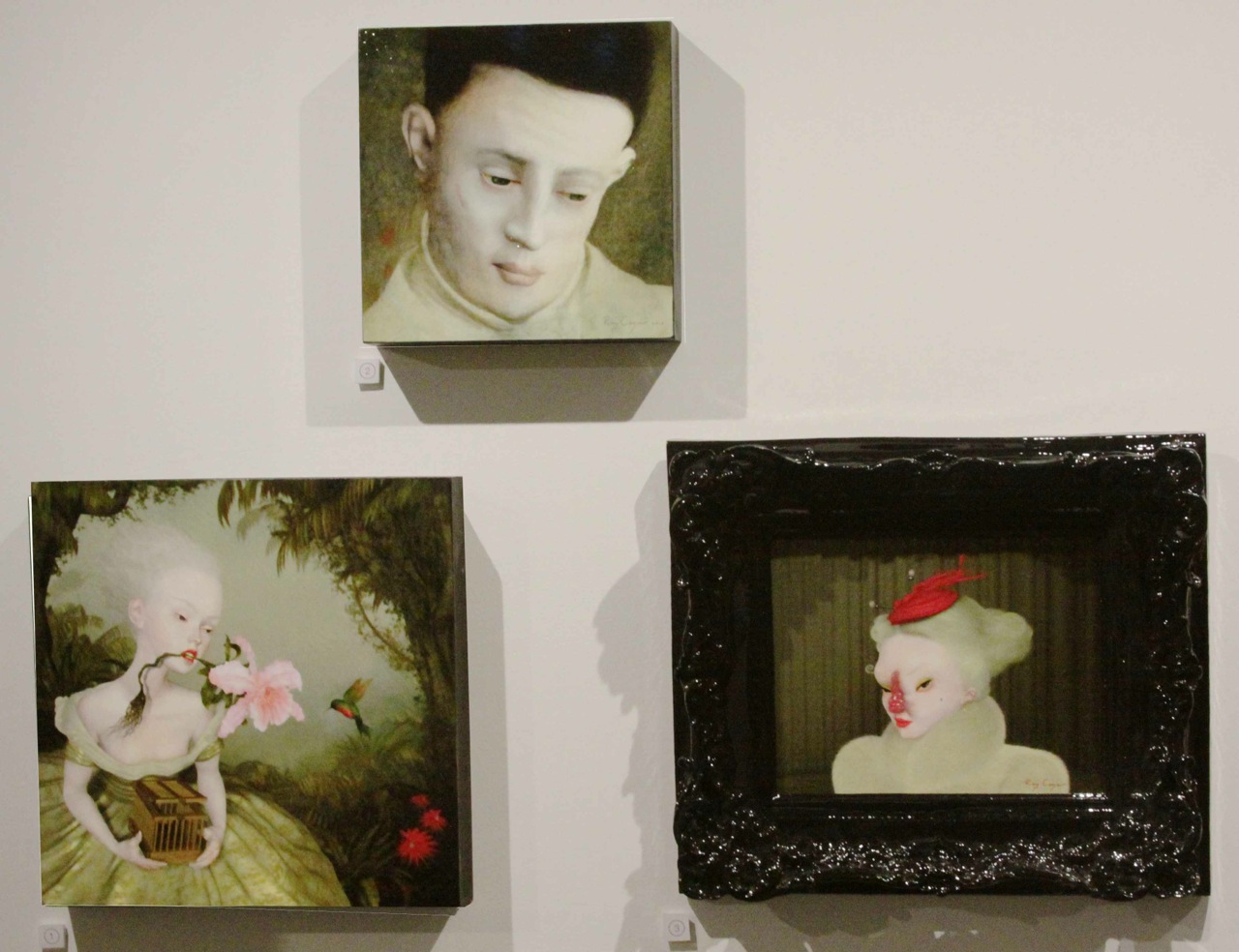 AM: Do you find critiques helpful?

RC: I don’t particularly find critiques helpful, simply because my work is very personal, and for me it is a reflection of who I am and not someone else. I know deep down what I am attempting to create. For most of my life I preferred not to show my work, as negative or positive feedback could have destroyed a very fragile thing I was building in my mind. I have found that another person’s opinion of my work is more about them than me, which is the way it should be.

Part of my work comes from a form of disassociation, stemming from a part of my psyche that isn’t always accessible, and isn’t always rational. It is not the sort of thing that can be improved with outside comment. It’s not the picture or image I am concerned with, it’s the feeling and emotion that lies below the surface of the picture. 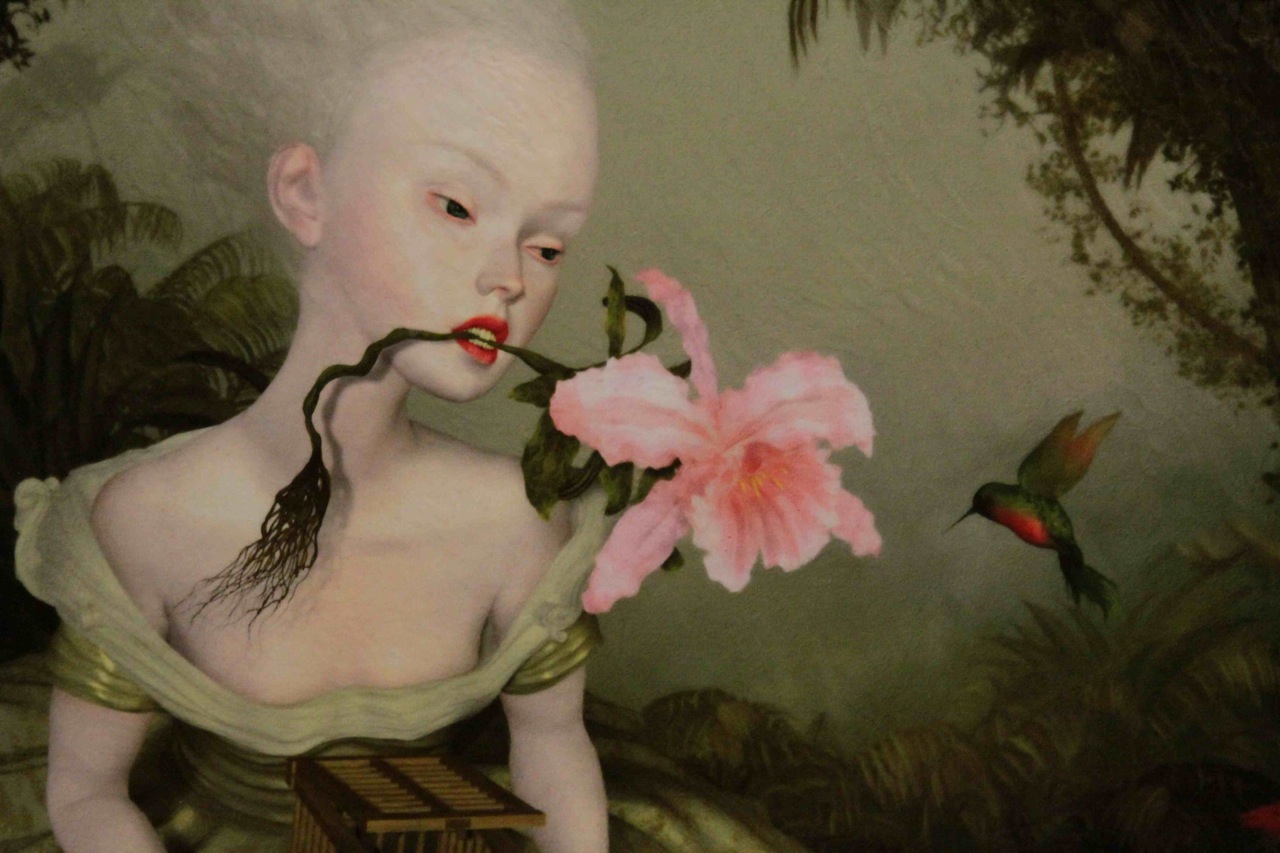 AM: I would love to hear about your process of making art?  What is your studio like?

RC:  Each piece starts with a sketch usually drawn at a Starbucks where I feed off the energy of the caffeine filled environment. I sketch using a form of automatic drawing where my hand draws a thing before my mind determines what that thing is.

I don’t have a studio as my computer is the space I use to build the world I am creating and I think of this process more as play than work. I have no interest in the traditional roles and spaces of the Artist. I don’t even think of my work as “Art” as there is a danger in that, I just think of it as what I love to do. I would be more suited in a playroom than a studio and think of my computer as a toybox rather than a tool. When creating the work I use a three dimensional modeling software called Maya. The great thing about that is that when I am in the virtual space, I find forgotten things I put there long ago, things like a picture of my sister in a locket hidden inside a dresser drawer or a folded love letter from my wife.

AM: Where did you learn art?

RC: I studied architecture at the Ontario College of Art, but I soon realized that the buildings I wanted to make could not be built. I had no idea I wanted to be an artist even though I have always obsessively made art since childhood. I just never put the two concepts of “doing” and “wanting to be a thing” together. I wanted to make a world that was a reflection of my mind and I felt it was important to see the image of what was in my mind by making an image of it in this world. I spent years working at the Art and Photography Department of a children’s hospital not realizing that was forming the foundation of my work. Years later, I studied computer animation and have always had an interest in puppetry. I am still trying very hard to learn “Art” and the only conclusion I have is that it is learned by living a life. 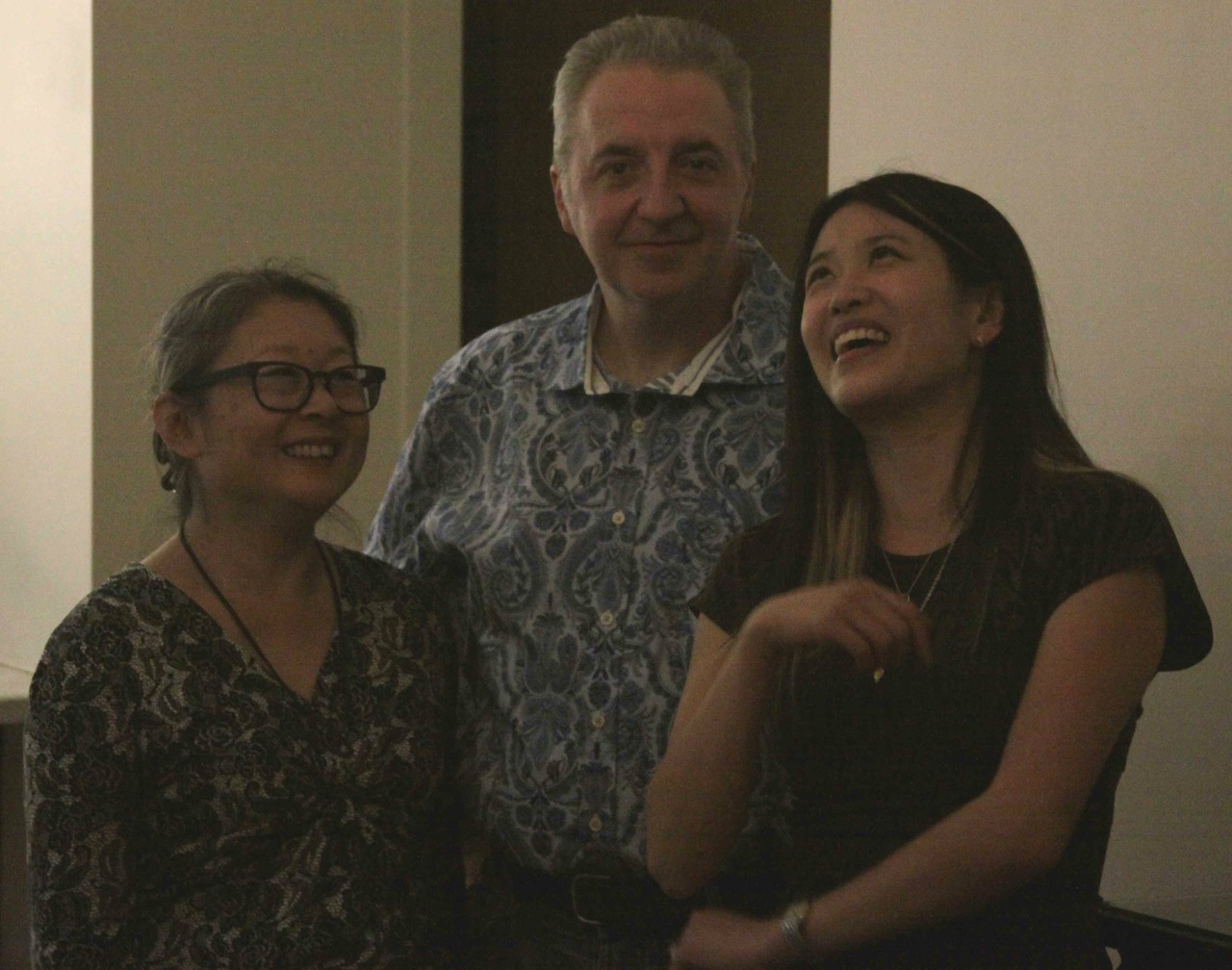 Caesar with wife Jane and Belinda Chun from Gallery House.

RC:  Two things jump to mind: the first is walking the red carpet with my wife at the Emmy Awards when I was nominated for my work on the TV show Total Recall 2027. It meant a lot to me to share that with my wife, because she has worked all her life in oncology helping heal people and they don’t give out awards for that. I feel we should have Red Carpets for doctors, nurses and other healthcare providers who help people. There are two great endeavors in this world – healing and creating, and they work best when combined.

The second was landing in New York with my wife on our way to my first solo show. I always enjoy showing in Toronto, and the upcoming shows in Rome at the Dorothy Circus Gallery will be amazing.  I really enjoy the pageantry of shows, and like seeing everyone enjoying themselves.

* Ray Caesar’s art work is available at various galleries around the world and is managed by Toronto’s Gallery House – contact www.galleryhouse.ca to locate his next exhibition and find out which gallery is closest to you. Upcoming, Caesar’s work will be featured in Amsterdam at Kochxbos Gallery opening this November 16, SCOPE Miami, December 3 – 8th with the Corey Helford Gallery and a solo show that will open in February 2014 at The Dorothy Circus Gallery in Italy.