Coming up in London on May 15th, Mobstr will be opening a show at The Old Truman Brewery entitled Sex, Drugs & Painting Walls featuring his text-based minimalistic street messages in a gallery setting. Along with the originals on display, the UK-based artist will also be working on some installations for the space that will also no doubt mirror the witty and clever plays on words that he has come to be known for. AM had the chance to interview him in the days leading up to the show on various subjects. Take a look at the questions and answers below, and RSVP for the opening if you are interested in attending. 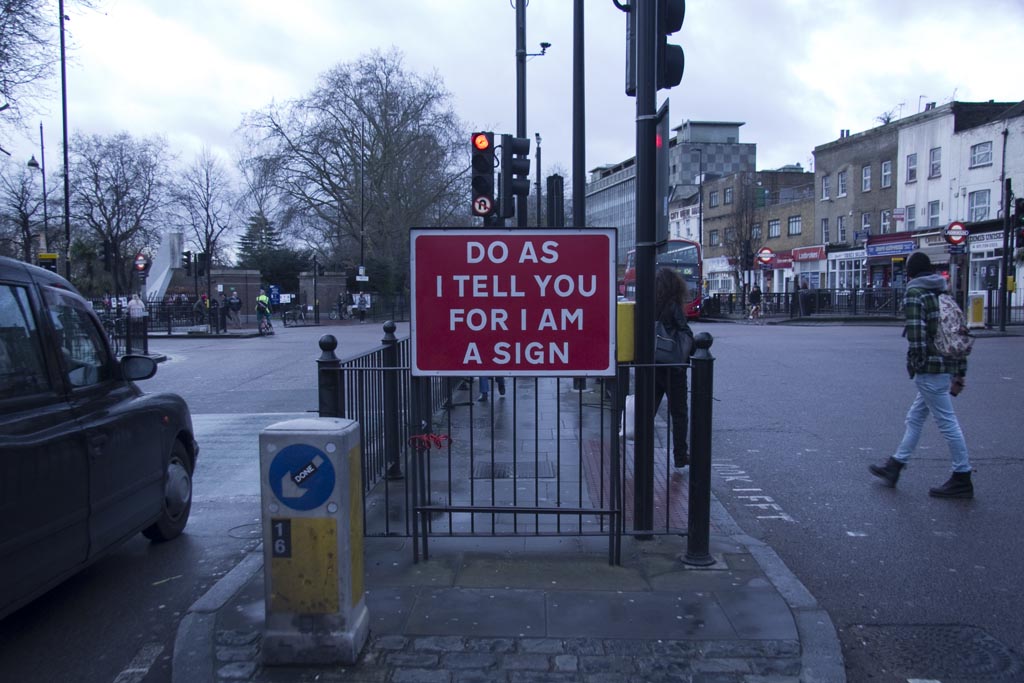 Arrested Motion (AM): Can you tell us a little about your work and the reasons behind it?

Mobstr: The work is very simple. I never planned or expected it to become so minimalist but somehow it did. The reasons behind it? I’m just having a little bit of fun and I get great satisfaction out of it. Life doesn’t make a whole lot of sense to me. I mean, I understand our immediate history and biological origins but the larger picture of existence is mind blowing. Painting on walls seems to preoccupy myself from thinking about this daunting complexity too much. 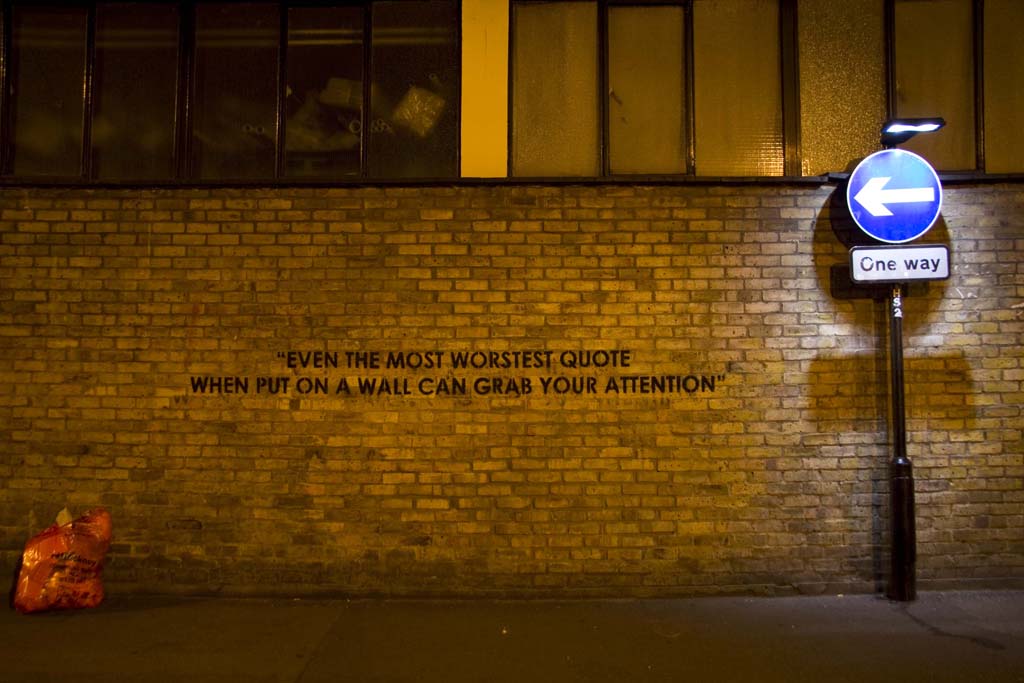 AM: How did you come up the name you use?

Mobstr: I’ve worked under several names. At one point I was like “fuck all this alias shit” and started signing my work with my first name. But I soon realised the danger of that. MOBSTR came about for a few reasons and I liked how there were different levels to the name so it stuck. Here are some of the reasons behind it: 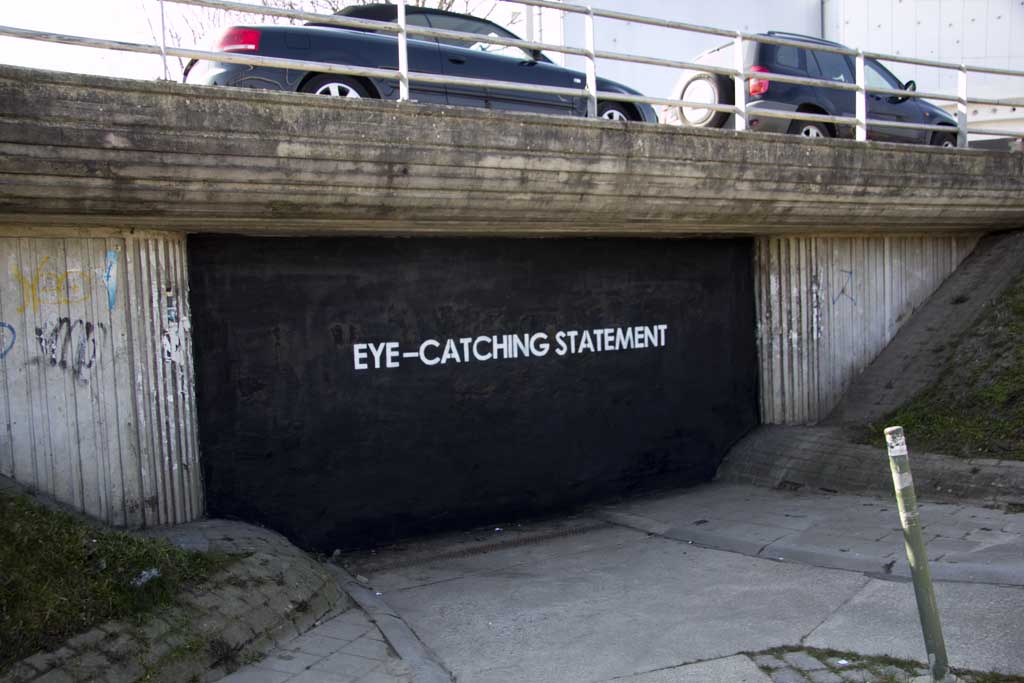 AM: What are the challenges you face when creating gallery work as opposed to what you do on the streets?

Mobstr: It’s a lot easier creating gallery work. Firstly, the chances of getting arrested for it are massively reduced. You can take as long as you want over the pieces. Generally the surfaces you paint on are a little nicer and you’d be really fucking unlucky if the buff squad got to it.

AM: It seems that your repertoire of works include stencils, hand painted pieces, as well as more figurative imagery. How do you decide which technique to use? Why do you think your stenciled works get more coverage – a function of you creating them in a higher quantity, those pieces resonating more with the public, or something else?

Mobstr: I used whatever technique is best for the job.

Although using stencils allows an image to be repeated many times with ease, it is very rare for me to repeat the same piece more than once. I use stencils simply for the fast execution. I could free hand the words but a clean font has more of an impact.

I felt the imagery in the scene was becoming overused and cliché so part of the reason I stripped the aesthetics and started using simple font was to differentiate from this. I think the word-based works get more coverage for several reasons but mainly I feel it gets noticed due to its efficiency of making an impact. I love the idea of condensing it down as much as possible and making “art” with just one word. 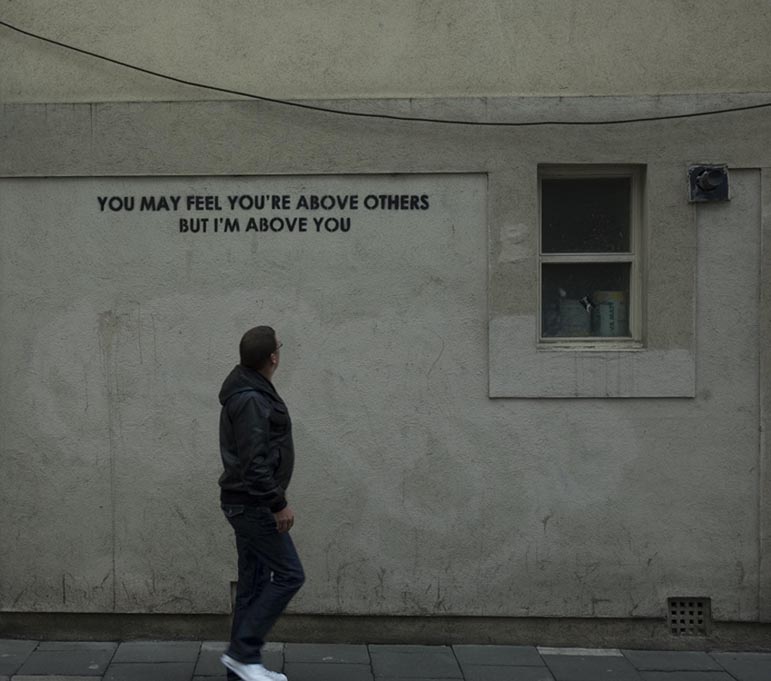 AM: How does your process usually work? Do you scout locations and then create works based on inspiration from the likely spots or do you have the piece in mind first and then look for placement?

Mobstr: Both. Some pieces are site specific e.g. opposite an art shop but sometimes a spot is chosen due to its advantageous location e.g. the direction of traffic down the road.

AM: Some of the pieces we enjoy most from you are the ones where you “play with the buff man” so to speak where for example, you take advantage of patterns of buffing or where you chronologically stencil your messages after each time it is painted over. In the latter case, it seems that the danger would increase each time as you attack the same location. Were all these instances painted over by someone else independently, or were some done by you to make your point?

Mobstr: I have been asked this a few times. For me it would be the weakest piece of work I could imagine if I buffed my work. I might as well do it in my bedroom or better yet not at all. The pieces are all 100% authentic and have taken anywhere between a few days to half a year to complete depending on the efficiency of the graffiti removal squad. Leaving half the work up to an unknown collaborator adds dimensions to it that I would not have thought out. For example, in “the story” a lighter patch of buff was left just the right size to fit “THE END.” I also like how the colour to cover “THE END” was black – a colour associated with endings. These elements are unpredictable but perfect. I started up “the story” in two different locations to account for the chance of something going wrong and ended up sticking with the more successful version. 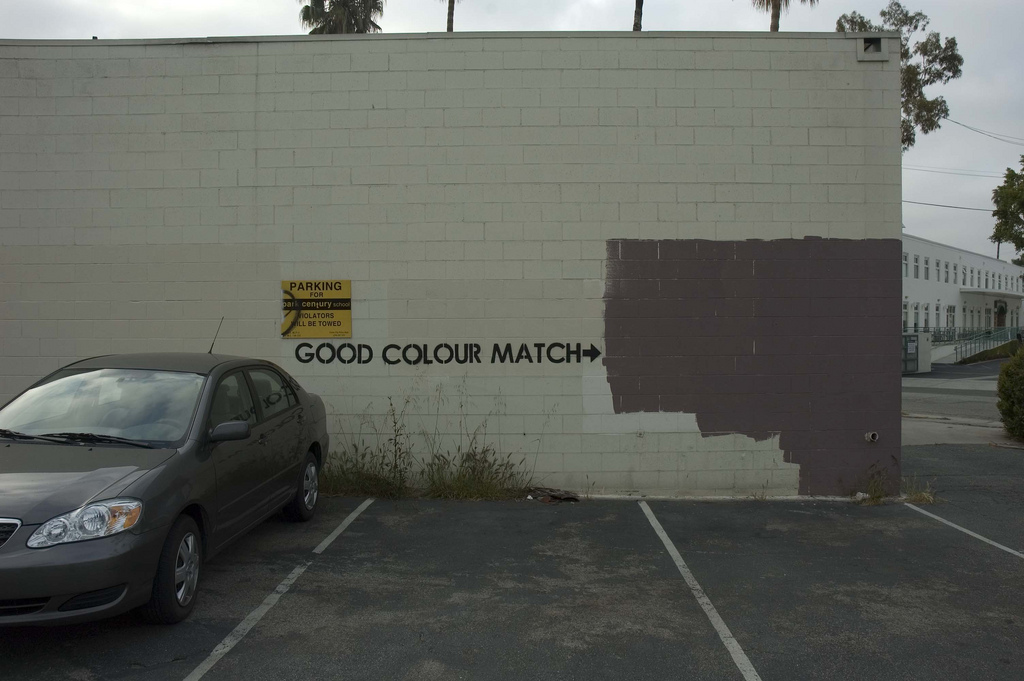 AM: Tell us more about this show in London that is about to open. Any themes you are trying to cover or cohesive ideas around this body or work?

Mobstr: To quote another interview I am doing simultaneously (sorry, I can’t phrase it better). I see it as a direct translation of my street stuff into an indoor environment. I think the body of work can be generalised as a critique of art, attitude and culture, punctuated by some general musings. I called it sex, drugs and painting walls not because it contained any of those three things but simply that it has a good ring to it. Also, it summerasises nicely what I’ve been up to for the last 12 years. 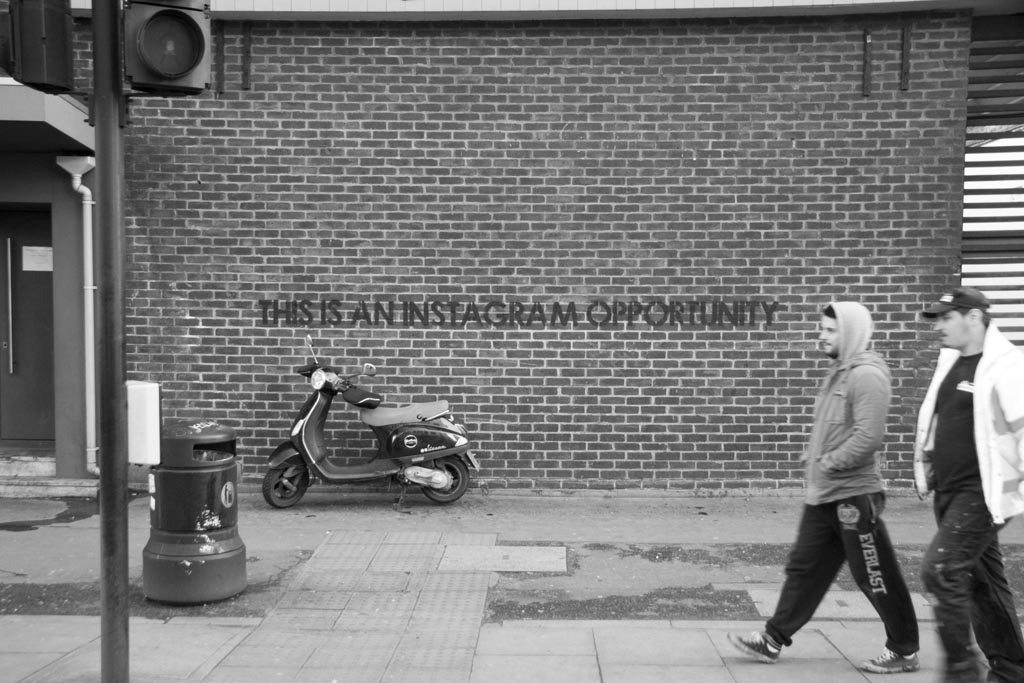 AM: Any future projects or shows you can share with us?

Mobstr: I never give out details of future / ongoing work but I will say there is a project that has been running for almost a year now.