If you follow the Graffuturism blog you’re probably aware of its writer and curator – Poesia. He is one of the pioneers of abstract graffiti and a member of the Transcend collective who helped popularise this particular form of graffiti, pushing new styles into the public eye as the movement continues to gather momentum and break boundaries.

We’ve been following the progression that many of these artists have been making for a while and we caught up with Poesia just ahead of the show to put a few questions to him. 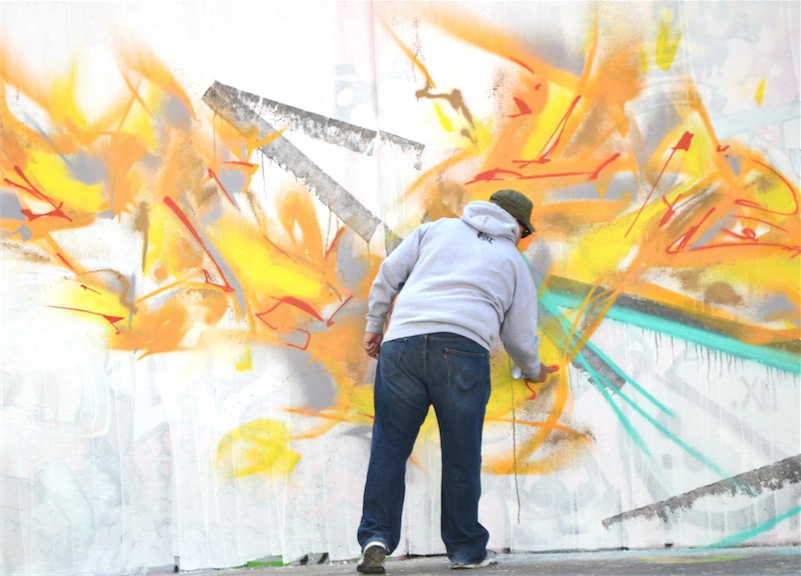 Arrested Motion (AM): First of all, can you tell us a little bit about your background? I know you’ve been pounding walls since the 90s, but do you have any formal art schooling at all? You seem to have a broad knowledge of historical art movements as well as an encyclopedic grasp of graffiti culture…

Poesia Transcend (PT): I have no formal training other than a semester or two in junior college. I have always been the type of person that delves into whatever I’m focused on – studying and learning has always been important to me. Coming from the early nineties scene, I was able to learn the history of New York graffiti through books about subway and spray can art but I was really able to see the scope of graffiti through sharing flicks and writing other artists internationally. During the magazine era pre-internet I was able to see the potential early on of a global art form. Through graffiti, I was introduced to art and I also set out to learn as much about art history as I could. I thought if I was to become an artist I should learn about that history as well.

AM: And of course you’re part of the Transcend collective. How did you come to run with that crew?

PT: I don’t know how Joker found me but I was honored when he reached out to me and later asked me to be part of Transcend. I was influenced by his work and ability to think progressively, so maybe he saw something in me. 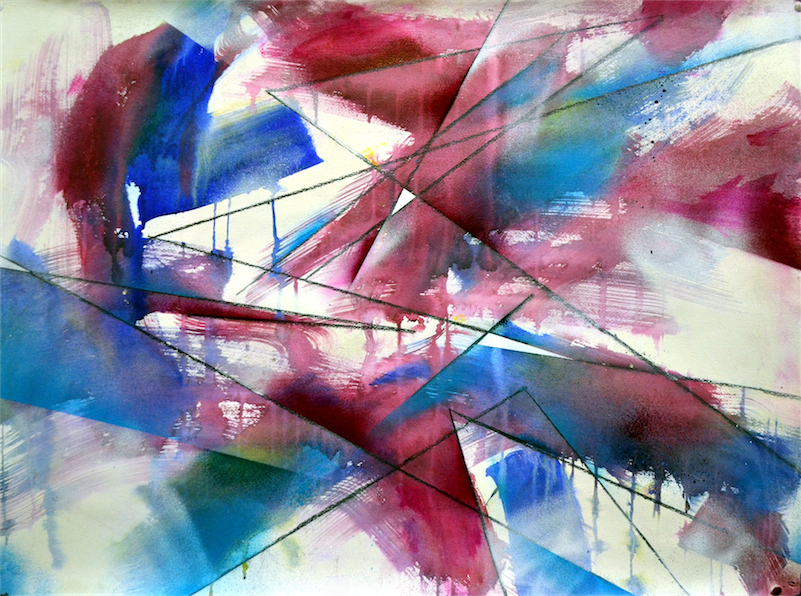 AM: Being such a global entity, how does Transcend communicate ideas and ideals? I’m very familiar with long distance art relationships myself, but I’m interested how you guys do it.

PT: It’s tough because everyone is so busy but we always support each other whether it’s a phone call, text or email. In the early days of Transcend, Joker and the collective were integral in myself being able to do some of the things I wanted to do artistically. Knowing that you have this support system that will have your back fail or succeed on a concept or idea makes it a lot easier to take risks. I think Transcend was that support group for me that no matter what I did they would understand and give me feedback positive and negative. We try to do the same today but with four new members in the last couple of years, I’m excited to see what we can accomplish in the future. 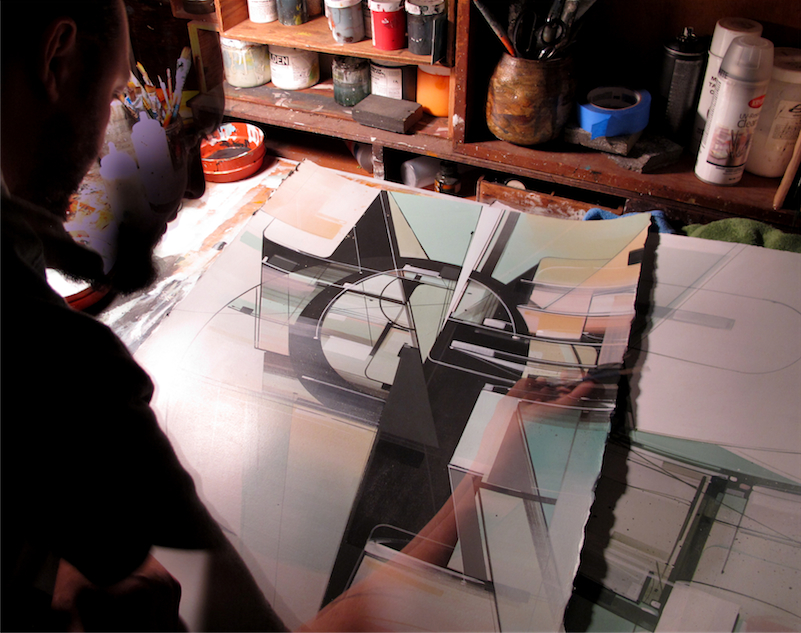 AM: Your moniker translates as ‘poetry.’ How did you come by that name? Did anyone in particular bestow it upon you? It seems particularly fitting in the here and now, particularly with the fine art work you are producing lately, but how has your work evolved over time?

PT: By chance really, only later did I find out the meaning. I have come to appreciate it over time not particularly because of my work but because I felt graffiti was always a bit like poetry but in a visual way. I think my work up till now has been working through the ideas that I have had before when I first starting painting. Early on ,you have this rush of ideas yet maybe the timing wasn’t right or your skills and experience weren’t there yet. Today, if anything has evolved, it is my ability to be at the right place to work on these concepts and ideas finally.

AM: You mix your time up between painting walls, a career as a fine artist, a curator and a prolific blogger. How do you find that time to cram all these different roles in your life?

PT: I don’t. Sometimes I take on too much and one of them is always going to suffer, and I am ok with that.  I never thought I would be anything other than an artist, but the more I read online and witnessed what was being exhibited in galleries, the more I saw we needed new perspectives, not an artists perspective but from someone with some understanding of the art form and where it might be headed. As a whole, I try my best to do all my current roles justice, but I can’t wait till others take the slack so I can focus more on my painting. 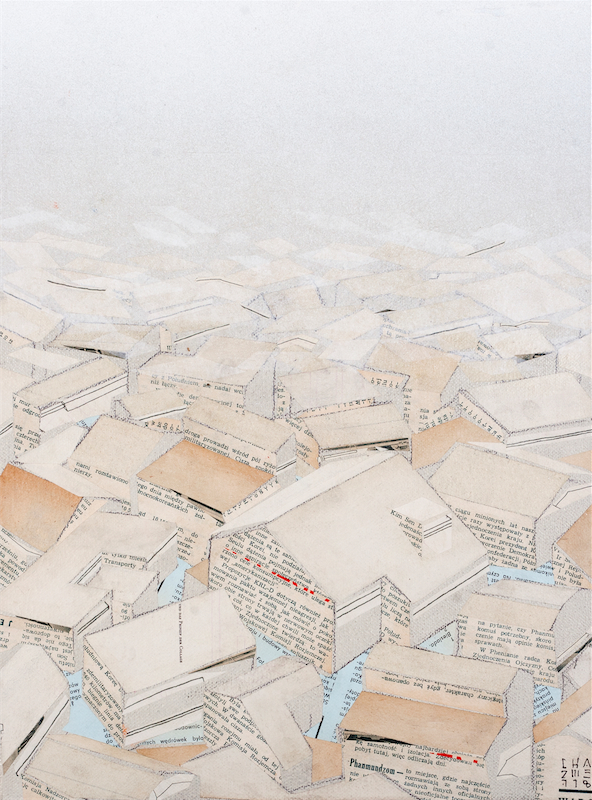 AM: On the subject of the blog, Graffuturism is one of my favorite reads out there and has been for some time. Your passion for the movement comes through in your writing. What was it that motivated you to start writing the blog?

PT: At first, it was about getting familiar with the scene and artists again, and that led me to find a large amount of artists that weren’t being represented at all online, so I figured why not me and why not a basic blog to showcase these artists. I had no idea how to manage a blog let alone create one but thanks to YouTube I figured it out.

AM: And you do it all pretty much by yourself? Trust me, I know how much time it can take up even with a team of writers that we have at AM!

PT: Yes, most of the writing is by myself there are a handful of people that contribute articles also from time to time, but the daily is just me. I have gotten used to it though and learned so much running the blog; one of these days I’ll find a suitable intern. 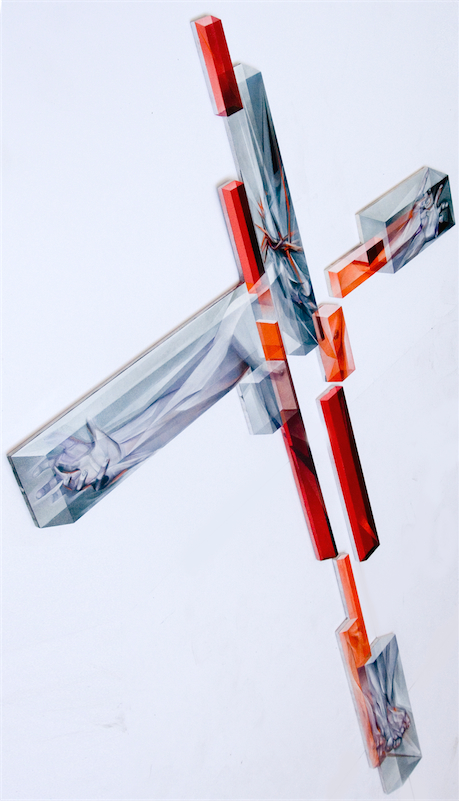 AM: The blog and the artists you cover have pretty much generated a movement, or certainly at least coined a phrase that people now identify a particular style of art by. How have you seen the blog grow since the early days? Has it been satisfying to reach out and connect with similar minds the world over?

PT: Its been one of the most satisfying feelings I have ever had creating anything, not because it has grown to be as big as it has but because the feedback I receive from so many of the artists I respect. Being able to create something and having that intention connect with the right people is amazing. One of the most important aspects of the blog is that it has brought together not just myself but so many other artists with each other. I think most of artists know what its like to be part of a crew as a graffiti artist, or maybe a collective as an artist but Graffuturism is one of those things that transcends both a crew and collective. It’s a road that we all were traveling but didn’t realize that others were on that same road, or maybe we did know but never stopped to say hello and interact with each other. The collaborations that have already happened with some of the artists are remarkable – Jaybo/Kofie, Clemens Behr/CDB, Mr Jago/Myself, Remi Rough/Nawer, Sat One/Roids, the list goes on. Being able to be a part of that is humbling not only as an artist but a fan of art as well. 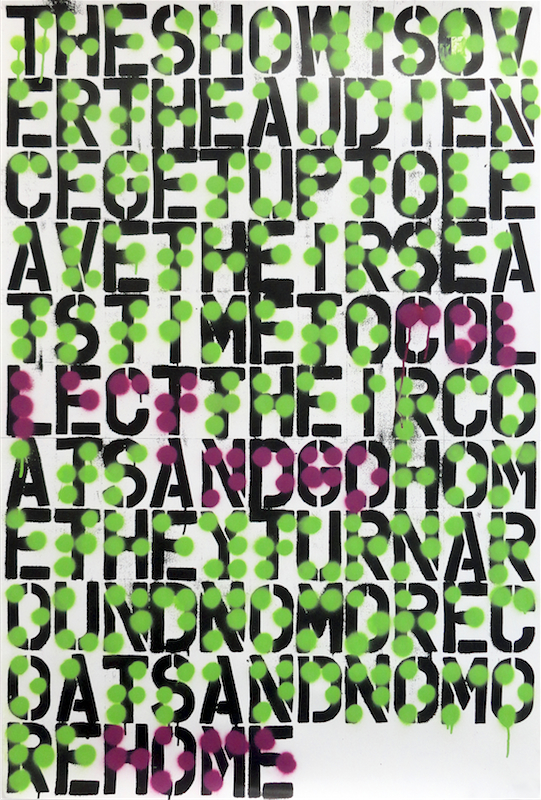 AM: Which I guess leads us onto your role as a curator. You have a trans-global collective of artists in your upcoming curatorial project L’Avenir. How did your selection process lead you to the participants in the show?

PT: Knowing that I was going to be writing my first curatorial statement, I knew I wanted to showcase a wider range of aesthetics. I also wanted to lower the amount of artists in the group show compared to past shows of 20-40 artists and we narrowed it down to 11. Because of past shows where certain artists were able to participate already, I could now focus on a mix of past artists and new ones like Borondo, and Robert Proch. Being able to bridge not only a legend but also a relevant contemporary painter like Doze Green with Kofie is amazing. Graffuturism is sometimes seen as an abstract movement, but I don’t think there is any one style that makes anyone more part of the group or not. We all have our own influences outside of graffiti/urban art thus of course we will have a wide range of aesthetics and concepts. 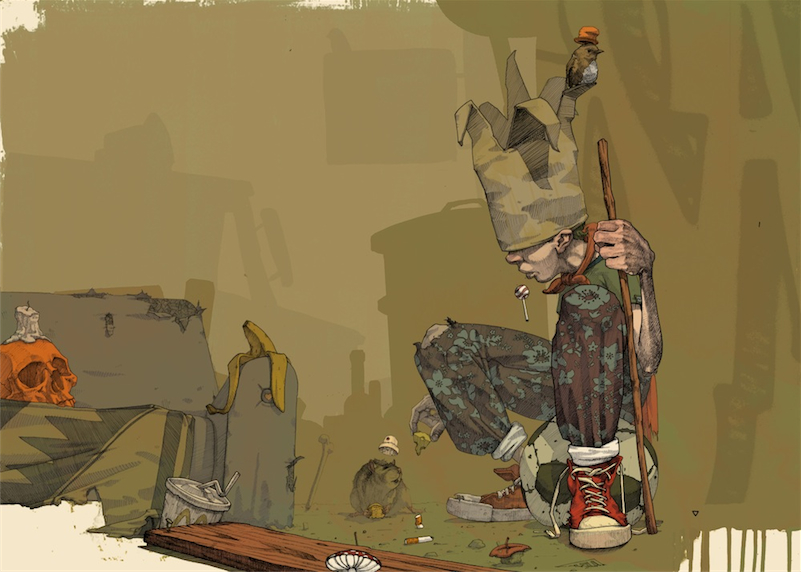 AM: And what about the work itself? Did you instigate any controls over the creation of work for the show, or let the individual artists just do their thing?

PT: Because we had a small group we didn’t need to restrict the artists to any size or amount of work – it was up to them to exhibit what they like. I chose the artists because of their individual work and didn’t want to get in the way of that work or hinder any part of that process. 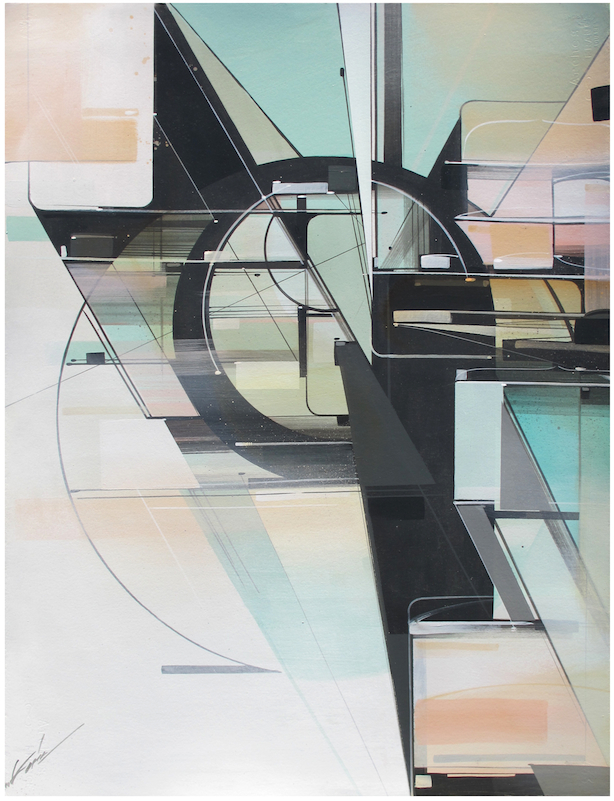 AM: Was working with White Walls on this project an important decision for you? I’m wondering how the show came about?

PT: Many don’t know the full story of how Graffuturism started other than just a blog, but the backstory is the week before I started the blog Kofie and Remi Rough had planned to be in town for a show. Joker from Transcend flew down to see Remi and we all planned to paint together. We ended up painting collaborative wall together, and then ended the night at a group show at White Walls Gallery where Remi Rough and Kofie were exhibiting new work. The show also introduced me for the first time to the work of Jaybo Monk, and in a way brought us all together. I made the blog the next week. So having our first show in San Francisco at White Walls Gallery made perfect sense to me. 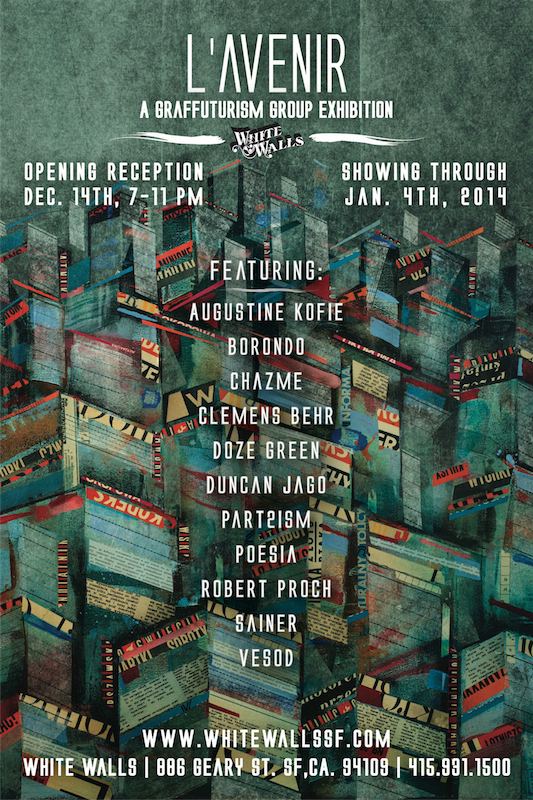 AM: Taking cue from the title of the show, how do you see the future of graffiti, and in particular the Graffuturism movement panning out?

PT: Graffuturism I think will be swallowed eventually into the larger neo-contemporary art scene but we will definitely have our moment. One of the biggest reasons for our success as an art form is our ability to engage the public and our own generations. The contemporary art world on the other hand is failing to engage anyone other than the intellectuals and elitists that their institutions cater to. For this reason I see a bright future for our art form.

AM: What’s next for you in your many avenues of output after L’Avenir?

PT: Hopefully more time painting that’s where I need to focus my attention. With more blogs like Arrested Motion covering many of our artists, it’s great to see so maybe I can relax a little bit. I have some other shows in the works Italy is an option for a large group show in 2014 and I’m working on a A4 show coming up in March with over 100 artists.

AM: Many thanks for taking time out do the interview Poesia. We wish you all the very best with L’Avenir. 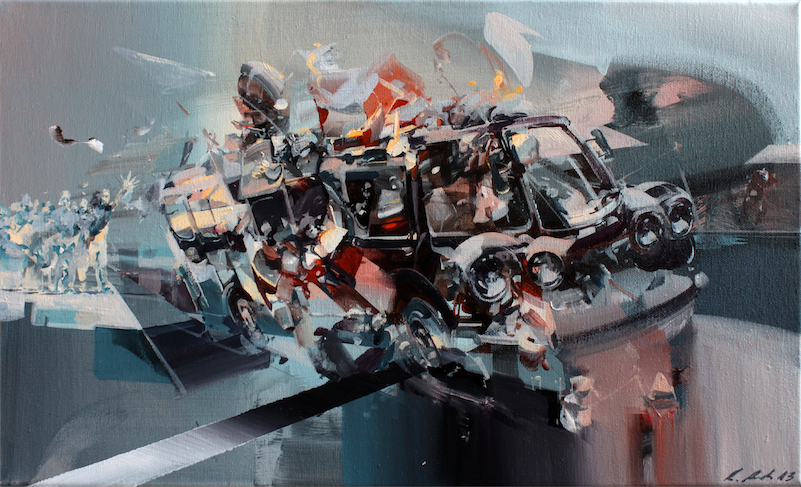 Pictures from L’Avenir courtesy of the Curator. Poesia portrait by Jerome Coton.