Recently, we had a chance to stop by the solo by Aaron Li-Hill at the C.A.V.E. Gallery in Venice (showing through this Sunday) and the associated mural. The selection of work on display, of which some can be seen below, focuses on one part of his oeuvre – renderings of the natural world. We talk about this as well as his background, installations, fencer imagery, and more in the interview below… 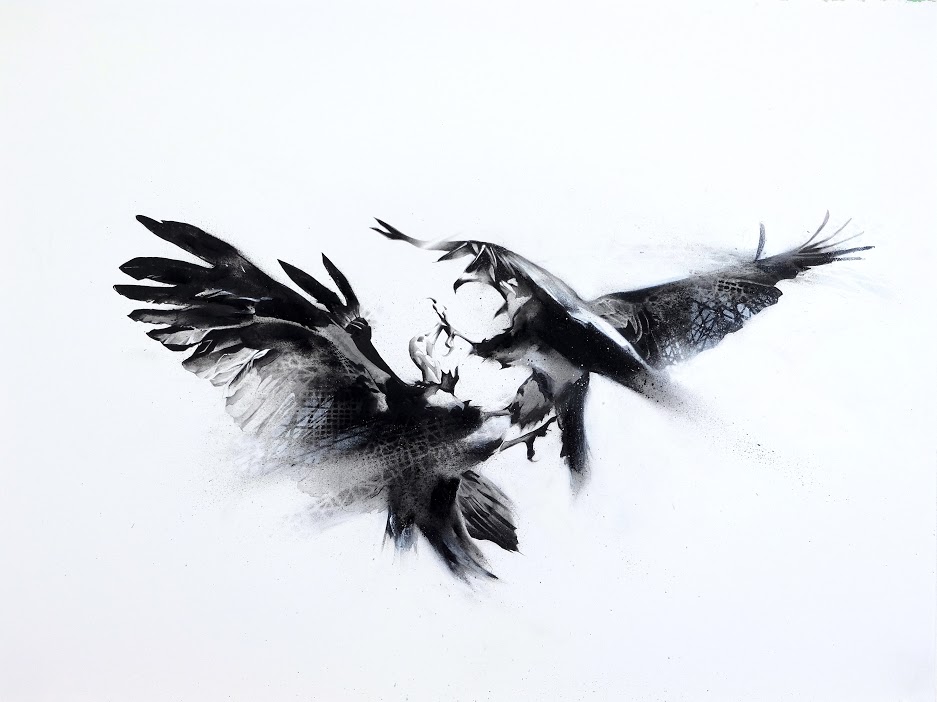 Arrested Motion: Can you tell us a little bit about your art background and how you got to where you are now in your career?

Aaron Li-Hil (ALH): I use to draw a lot as a kid but then it became all skateboarding and antics. I dropped art for a long while until some friends of mine started writing all over the neighborhood. Slowly graffiti took over as that main passion in life and in a round about way, it brought me back to fine art. Eventually I ended up in art school where I finished my degree, but between years is where I really learned how to draw and paint. I travelled Europe with my sketchbook and copied paintings in museums. But, I can’t totally disregard my schooling, it helped me formulate and contextualize my ideas.

So many things attribute to how you get somewhere. I think a large part has been about support, never feeling like I couldn’t accomplish something and then putting in the work to get there. I also think I’m lucky being in the time period I am in now. With the advent of the digital age, things like exposure are a lot easier to accomplish. A large part of where I am now began with getting my art onto blogs and sites that I have admired. Arrested Motion has done a lot for me in that regard… so thank you! 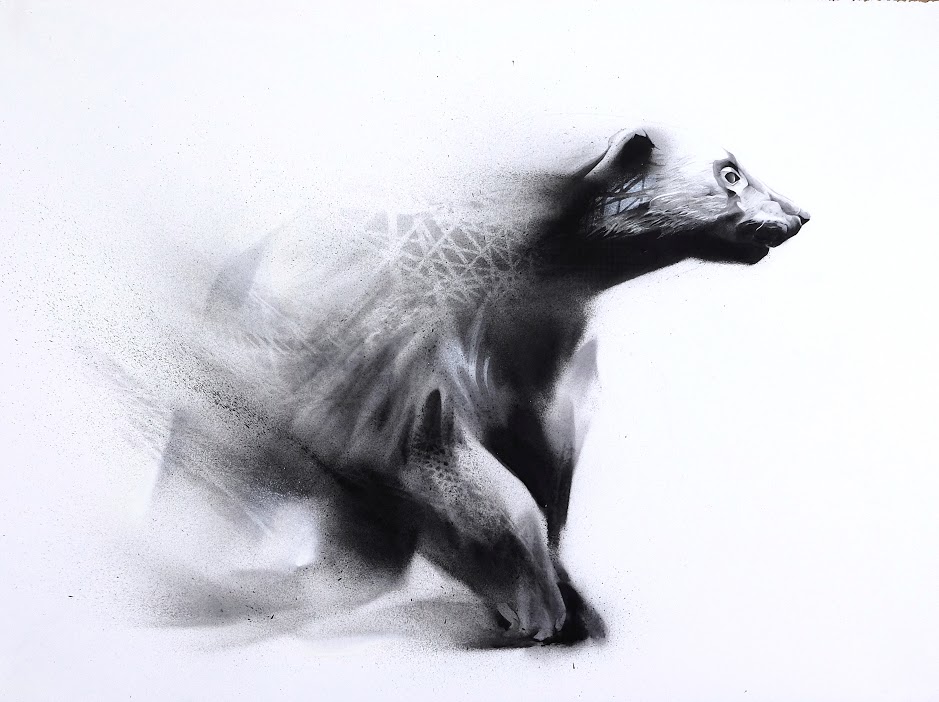 AM: You chose an interesting name for this new body of work – Carbon. How did you come up with the title of the show and what was the message behind it?

ALH: I find coming up with titles pretty tedious most of the time. I usually write out a list of words, phrases or sentences that speak to the body of work. Looking at the way the animals dissipated into the tiny dots of spray paint made me think of molecules of carbon and it dawned on me that that was the common thread between it all. Carbon in relation to the cycles of life and death, as all matter is made up of carbon but also to the different formations of those atoms to create the biodiversity we see on this planet. Carbon also speaks to what is threatening this biodiversity through rampant industry and waste production. Even the tools I used were basically all carbon. 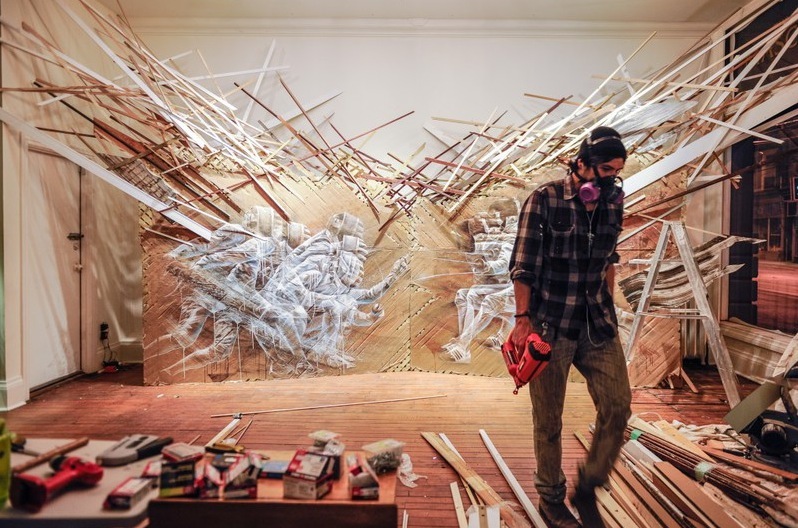 AM: What drew us initially to your work were the striking installations you create with found materials that are full of kinetic energy and simulates motion so well. Can you tell us a little about how you came up with this concept?

ALH: This concept started as small drawings and stencil pieces I made in university. Based on what I saw as the “bones of the city” I created these dense abstract line patterns. I found these patterns repeating themselves in many different forms such as scaffolding systems, aerial views of cities, mapping of internet networks and flight routes. These patterns are born out of rationalization yet overlapped in the densities we see create a dramatic sense of chaotic order. Eventually, these drawings turned into piece made of thread that became more and more three-dimensional. The long discarded strips of planed wood became an extension of the first initial lines I drew. I wanted to create work that was connected to those flat surfaces I usually worked on, yet make something that navigated the environments I spoke about. 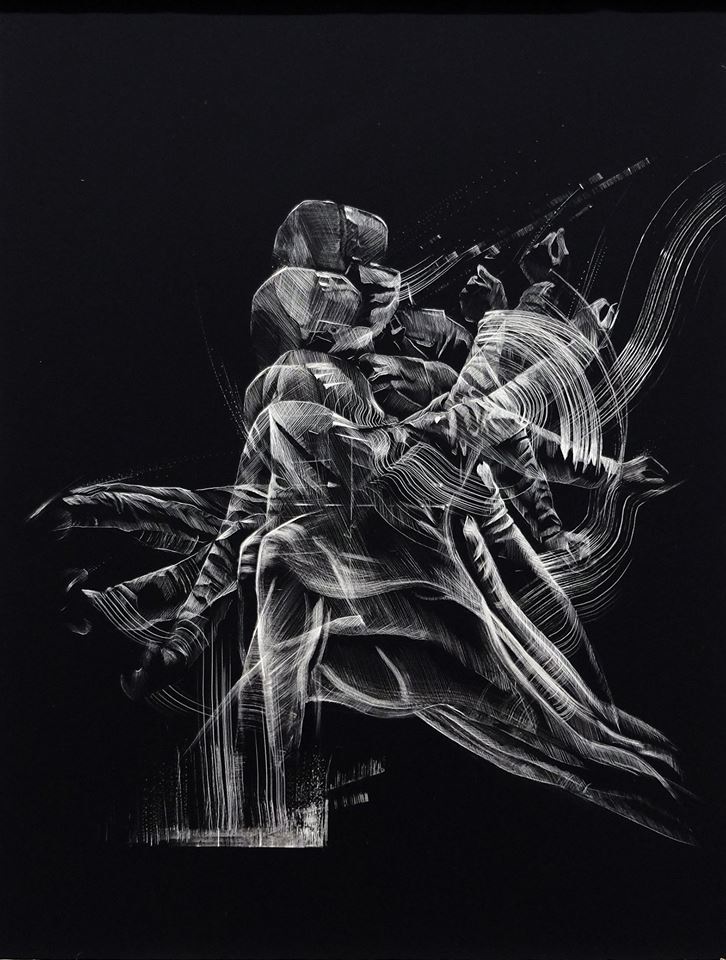 AM: Your work featuring the fencers are pretty awesome – why fencers?

ALH: A lot of people think I fence or that I am obsessed with fencing, which isn’t the case but it has become a very interesting symbol for me that holds powerful associations. The most prominent association being the Olympics, which I see as a contemporary form of battle, where global power dynamics are expressed. With such a strong military background and deeply held connotations of war, fencing is where we can see these ideas conveyed. The whole event encompasses political, social, economic and environmental issues all within the human drama of sport. The Olympics influence and change so much about host cities and advance many neo-liberal tactics that drive contemporary capitalism and change the urban environments around us, which is how this subject all ties together for me.

But, these ideas are not that apparent on the surface level of these works. What I do think gets conveyed is an aggressive action, filled with speed, cunning and power and that, even without my connotations to capitalism, I think embodies a lot about our current state. 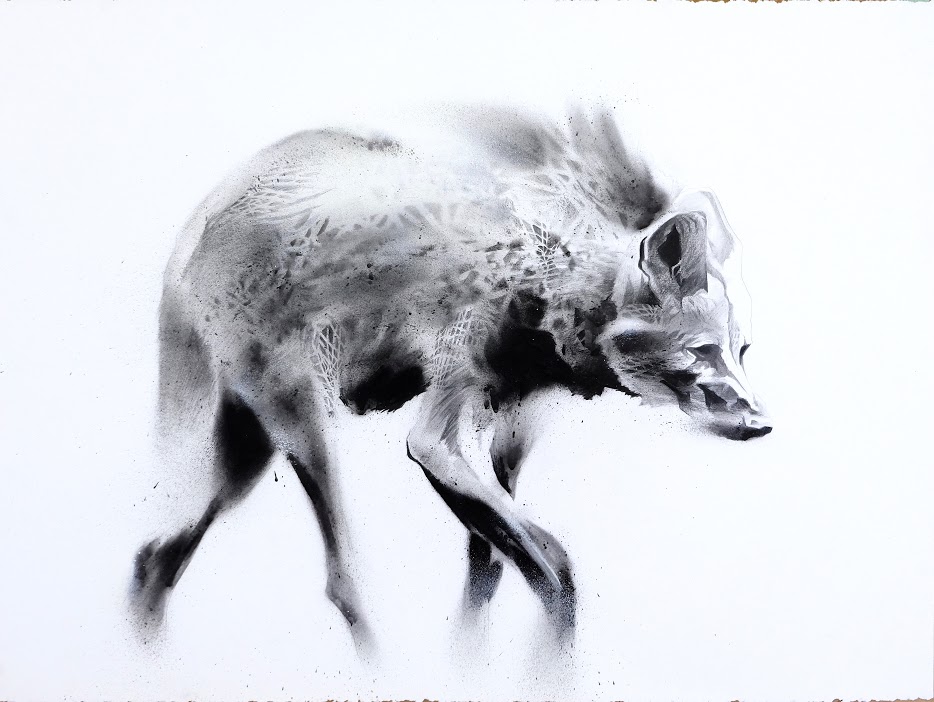 AM: How does creating a series of paintings differ from painting a mural on the streets or building an installation with three-dimensional features? Does the mindset change or is there some connecting artistic vision that you have throughout each process no matter the end result?

ALH: I would say the mindset changes slightly depending on the environment or parameters. For a painting on canvas, there is still the defined edges and how that affects the work but for murals and more so for installation, those parameters drastically change and I find that the =most exciting thing to respond to, which is the environment. That excitement definitely changes the mind state. There is a connecting artistic process that ties it all together though. I would say that process is two pronged, what does it mean and how does it look. 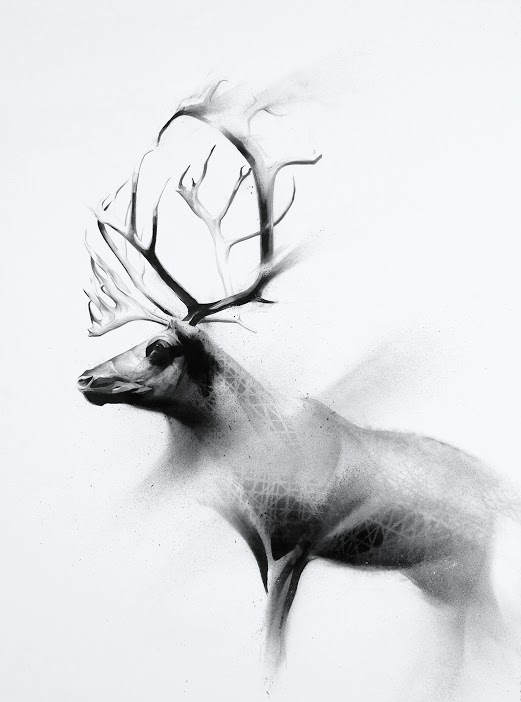 AM: It’s been mentioned that you have a background in graffiti. How did you progress to the more figurative work and mural painting?

ALH: I got bored of letters and how little that seemed to engage with the public that was seeing what I put up. I moved toward the figurative because I had always loved the figure, even as a kid. Most my graffiti had characters with them and eventually the letters disappeared and the characters stayed. 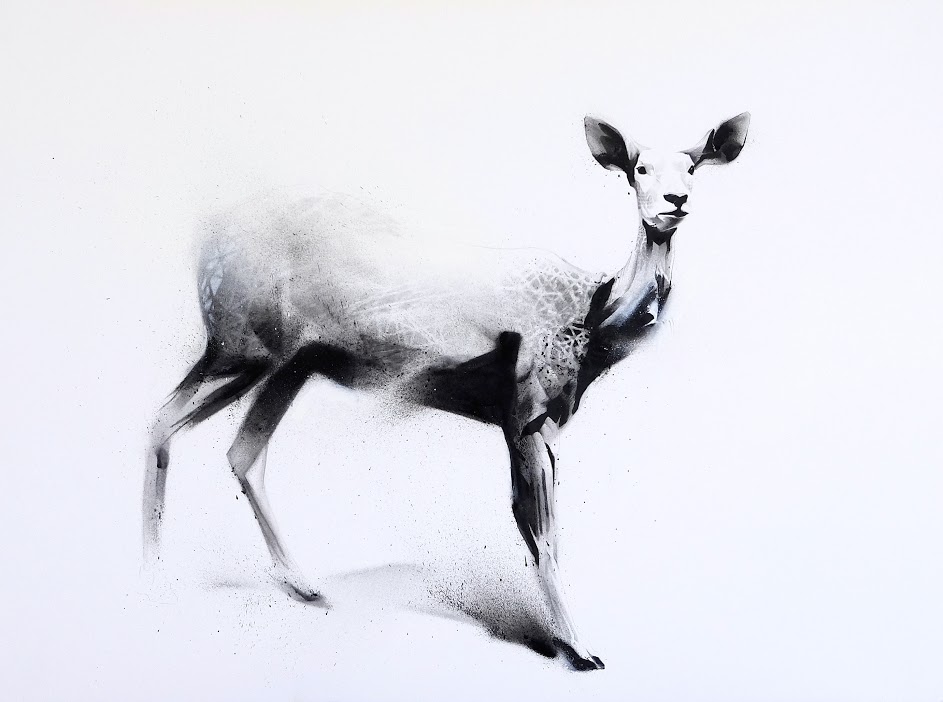 AM: Any other shows or projects coming up that you can share with our readers?

ALH: For the near future, I am taking a break from canvas and studio work to push my installation pieces and work in interesting places outside the gallery setting. Come spring, I should have some different projects set up and I will definitely keep you in loop! I am also very excited to head to Berlin for the first time to do a large-scale piece with Urban Nation along with some smaller walls in London lined up. In July I will be heading to Rochester for Wall Therapy, which I am really excited about as well!