Last month, two veterans of POW! WOW! Hawaii joined forces to collaborate on an indoor installation for Olukai Shoes’ #anywherealoha campaign. Kamea Hadar traveled from the islands to Tristan Eaton’s homebase, Los Angeles, to join him in painting the mural entitled Pele, Maila, Hina. Steeped with symbolism from Hawaii, the piece blended Hadar’s portraiture with Eaton’s signatures patchwork style. At the end of the night, the wall was buffed, a tribute to the temporary nature of street art.

Hadar further explains the mural – “When we started to try to figure out how we were going to collaborate we couldn’t figure out if to paint two figures or one, and in the end we decided to combine the two ideas to include two faces who share an eye. This was not only a nice compromise, but also allowed for more opportunities to crossover in styles and gave a slightly more ‘God-like’ appearance to the figure. We painted hints of Hawaiian Goddesses such as Hina the goddess of the moon, and Pele the Hawaiian Goddess of fire. Pele was known for her destructive lava and fire (represented by the flaming Hibiscus flowers), but this was also seen as rebirth as new plants and animals grew from the land she covered. The hibiscus flowers in the piece relate to my recent series entitled Paradise Lost, and can be seen as both paradise being destroyed or as a rebirth. The flowers hint at Hawaii’s struggle between holding on to tradition and moving into the modern world, between keeping the natural beauty of the land and the growth of the urban landscape. In Hawaii a flower is worn over the left ear to signify that a woman is taken as it sits over her heart, and over her right ear if she is single. In this case we painted both to show the duality and balance of our themes.

The piece is made up of a balance of styles and Tristan painted patterns found in native Hawaiian flora and fauna such as the Nene Goose in brown and beige on the top corners, Blue Spotted Boxfish in the bottom center, native spider species in black and yellow and rare sea snakes in the pinks and purples. The piece is broken up into many triangles, which can represent many things in Hawaiian imagery, among them the teeth of ancestors or the teeth of a shark which to many Hawaiians is considered an ‘aumakua” or guardian spirit. These shapes not only helped to balance the symmetry of the piece, but allowed us to parallel our styles side by side in many different combinations. Obviously Tristan has tons of different style elements which he incorporates into his pieces from his greyscale to more graphic patterns, and in my case I switched between keeping extremely tight detail to a more loose style, between color and greyscale. It was an honor to work with him, and I hope that it’s the first of many more projects to come.” 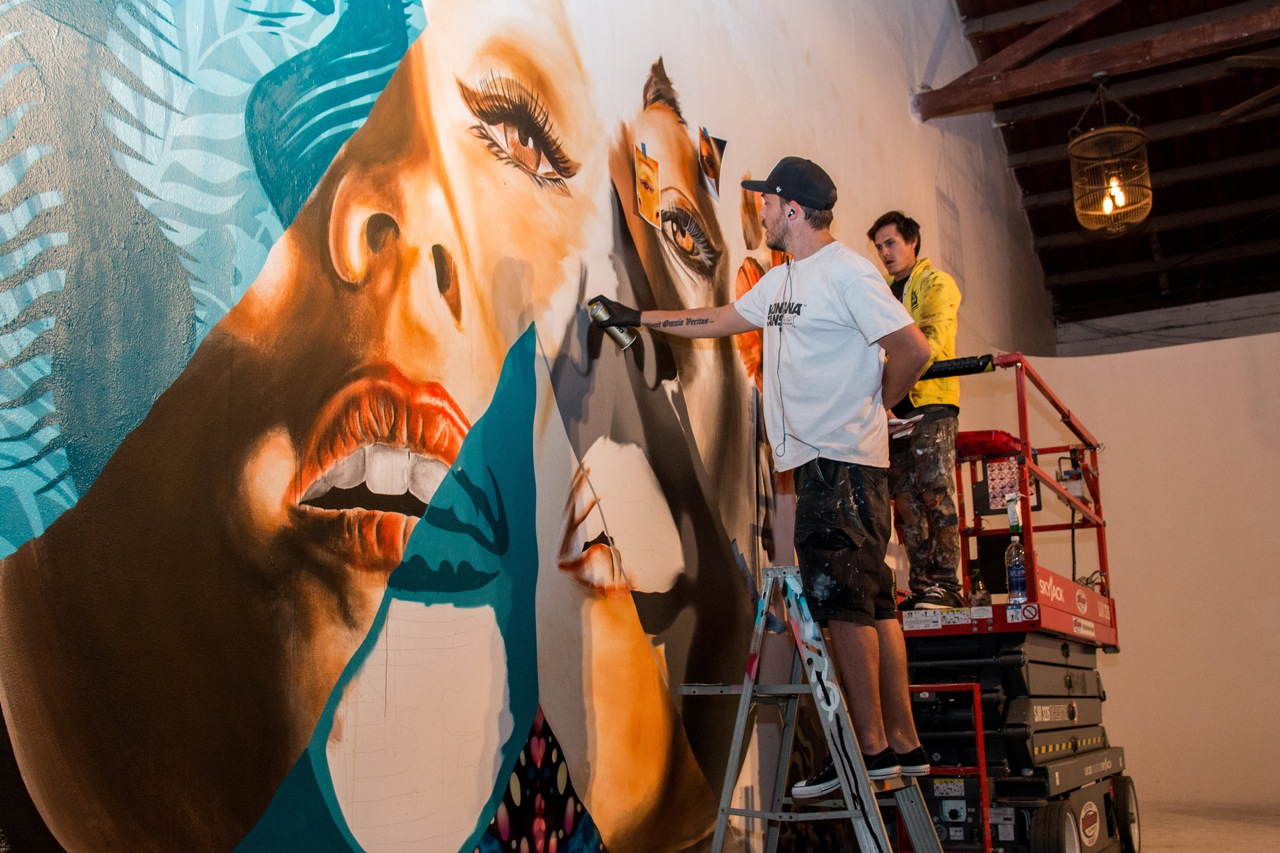 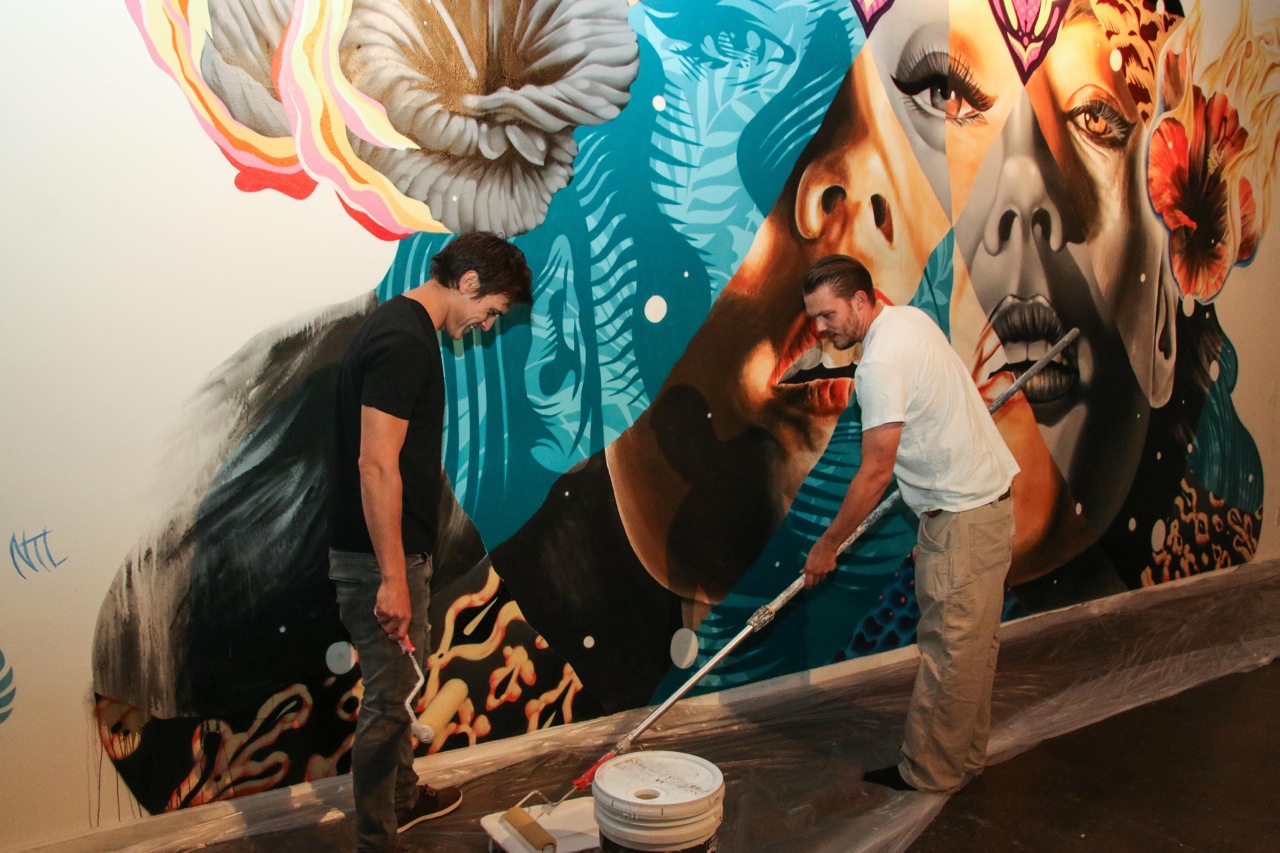 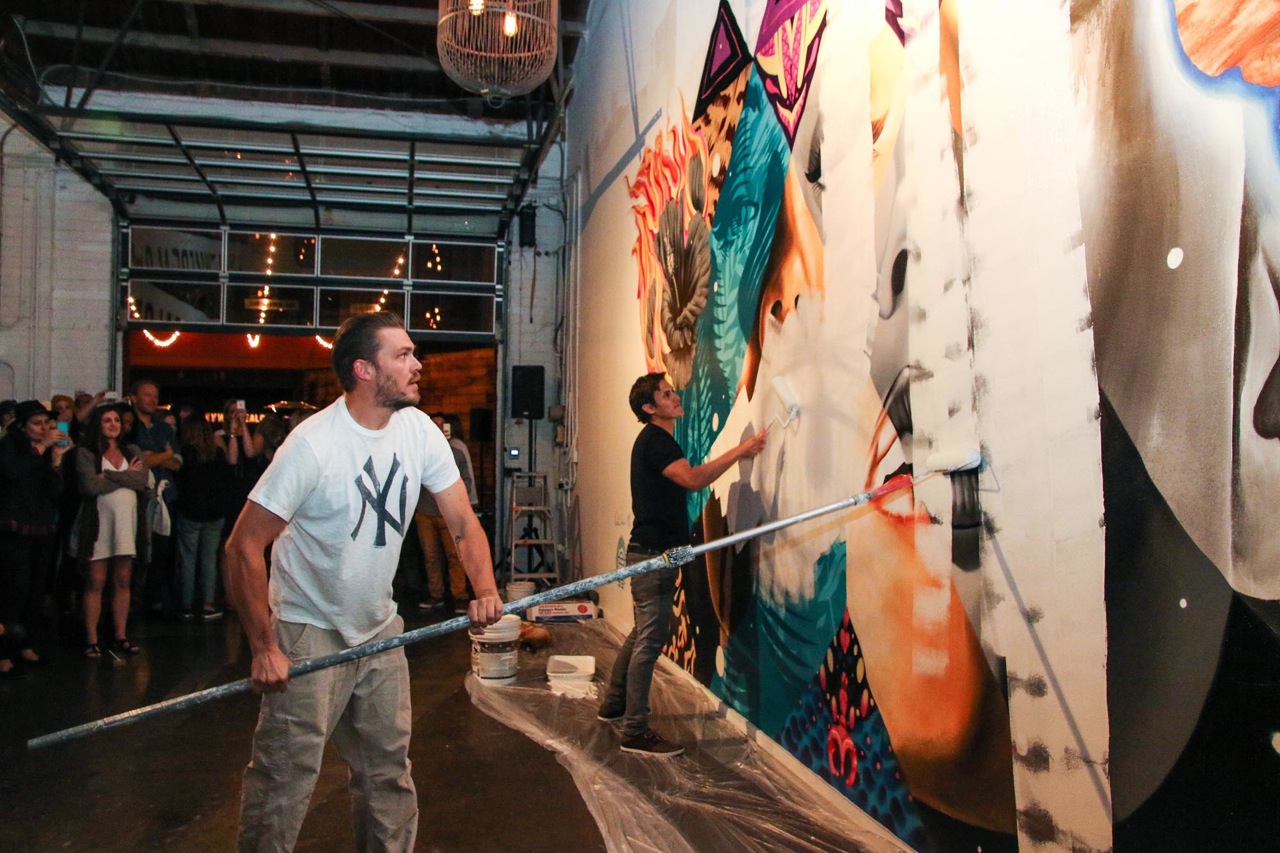 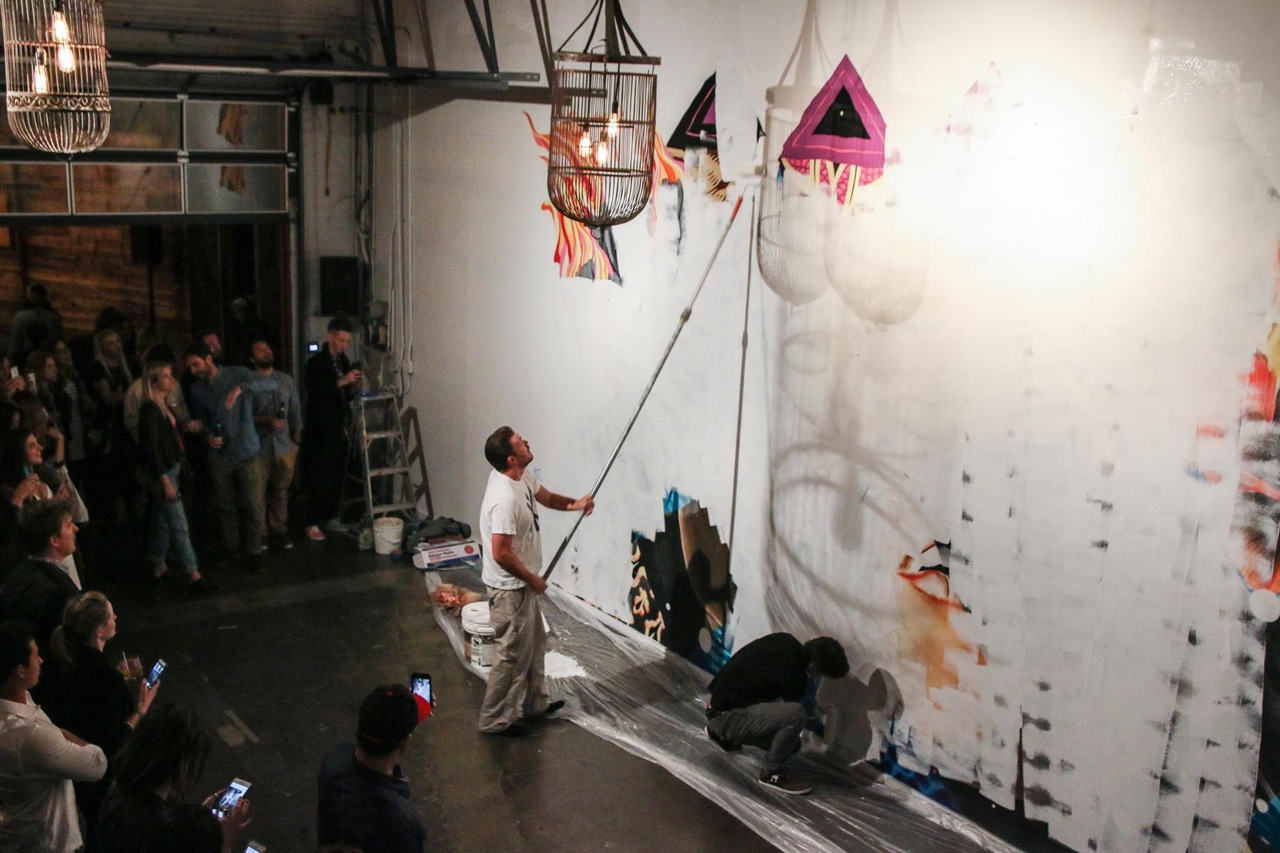 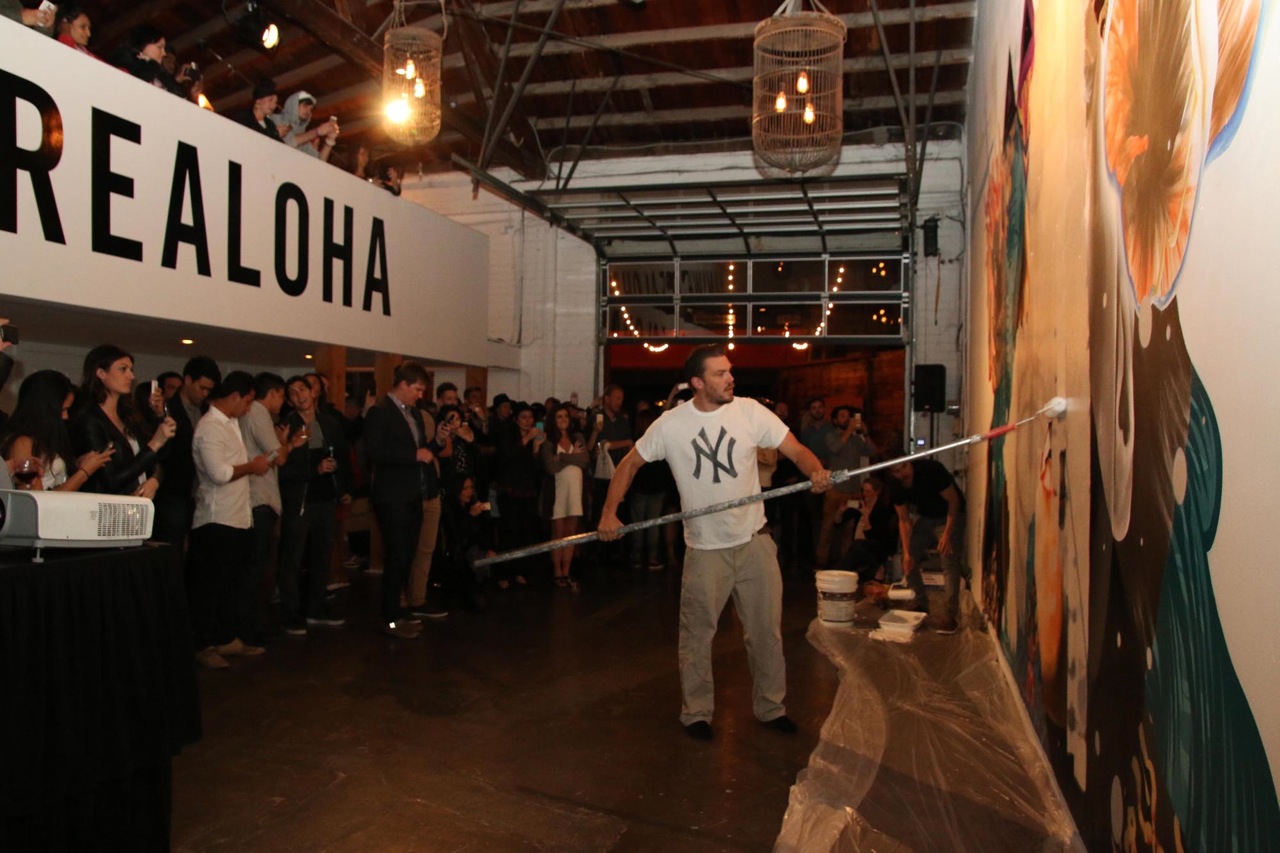 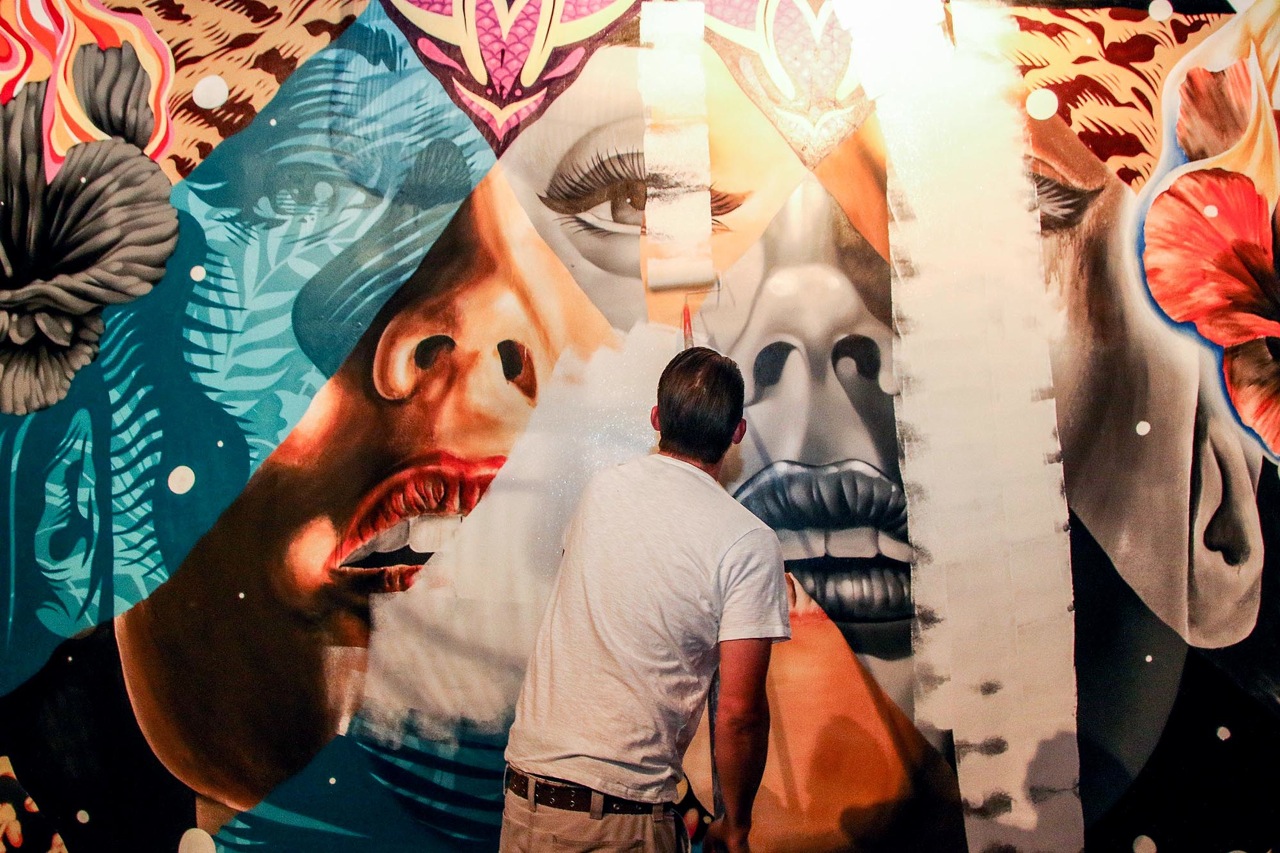 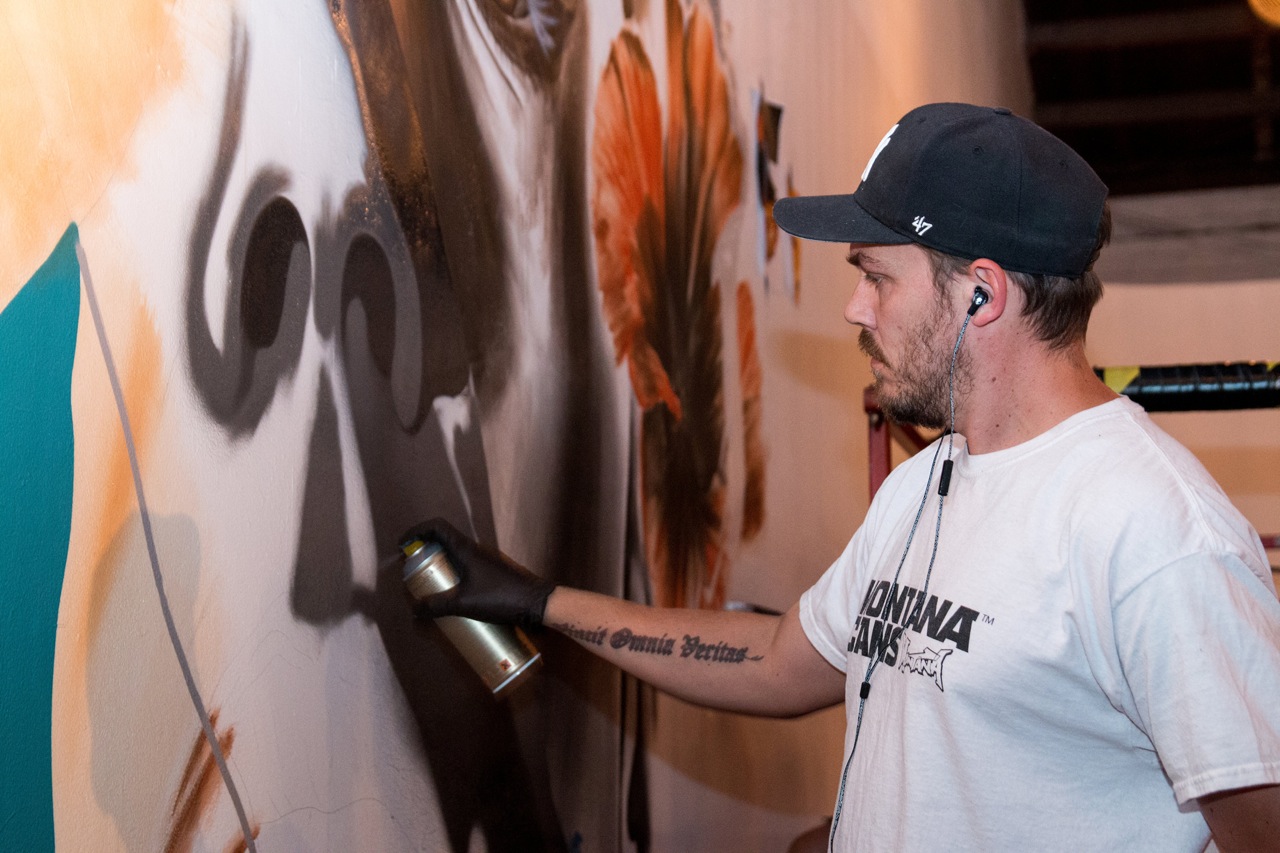 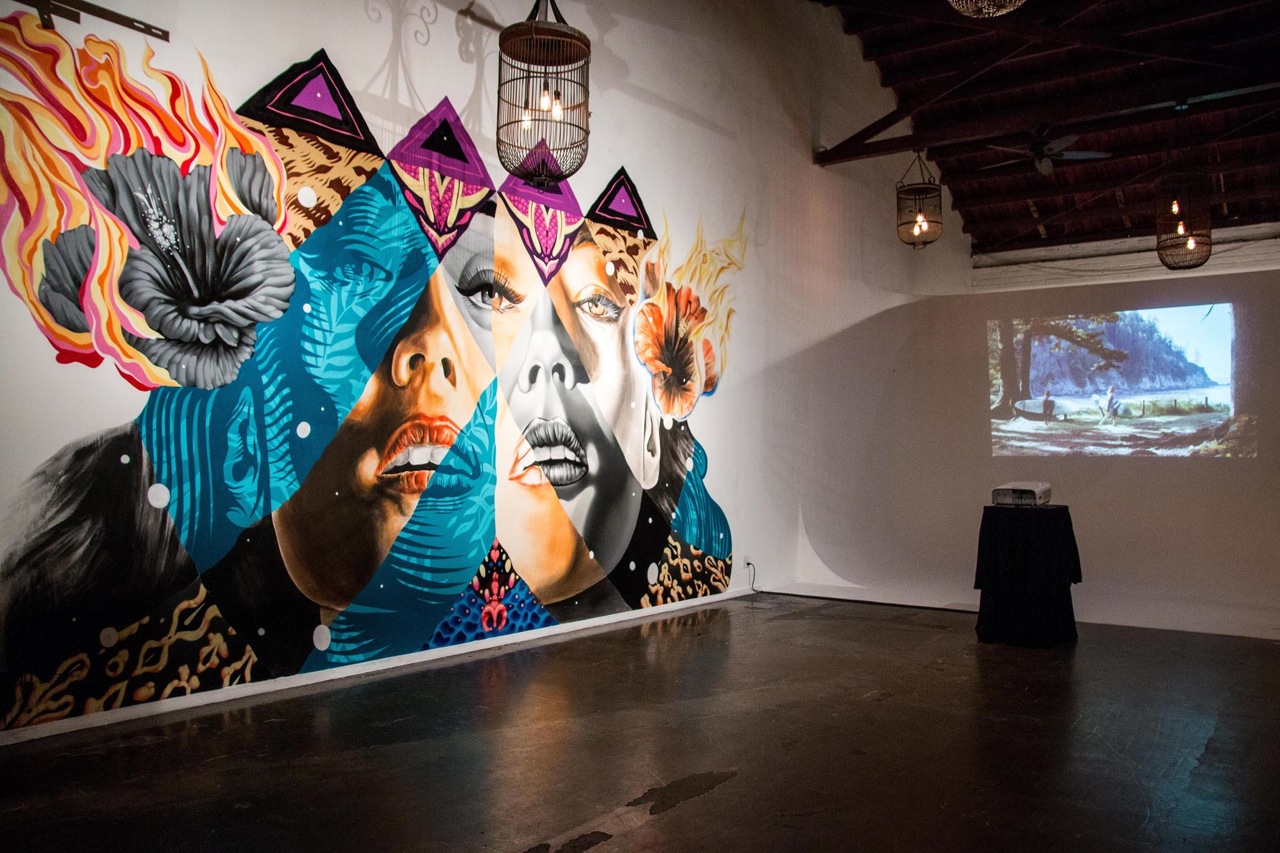