Ahead of his upcoming show, Nightcrawlers and Lightseekers, opening at Galerie Openspace in Paris on the 3rd of February, stencil genius Logan Hicks was interviewed by NY based curator, writer and author Lori Zimmer hitting topics like his past 20 years as an artist and the background for his new exhibition. 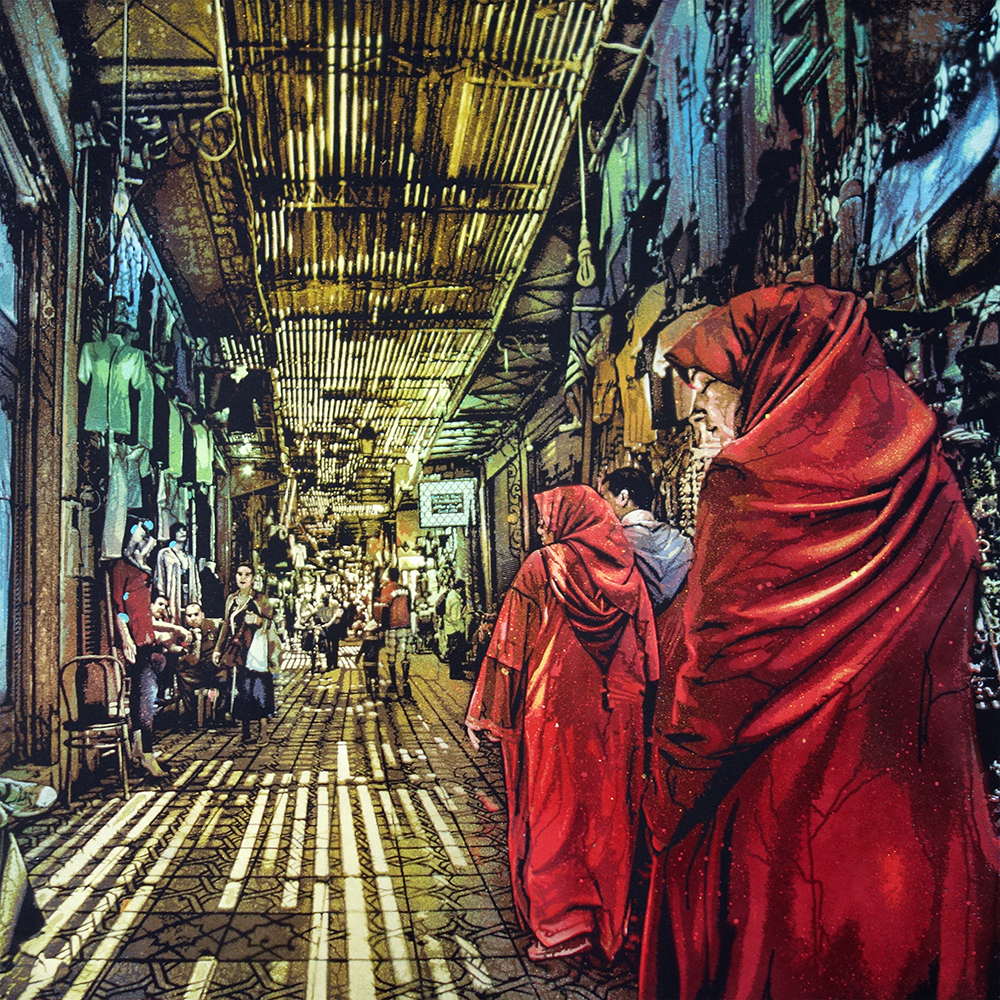 Lori Zimmer (LZ): You’re known for pushing the simple technique of stenciling to incredible, photorealistic lengths. Can you explain how you achieve such incredible detail with stencil and spray paint?

Logan Hicks (LH): I guess that for me, I use stencils to make paintings that don’t look like stencils. I try to elevate the medium of stencils beyond a simple one color crude image. Many stencil artists they tend to spray the outline of something, then fill in the colors as though it’s a coloring book. But for me, I use the lighting as my motivation. I don’t really care where an object begins or ends, I just care about how the light hits it. The lighting is what gives a painting life. When I look at a street scene, I don’t really see the fact that there are X number of cars, or a building here or there but I will notice that there is an LED bluish street light placed next to yellowish sodium street light and painting that tension between the two different lights is what is the most interesting. Stenciling is ideal showing the tension between colors because the mist of the spray paint as it falls onto the stencil is similar to the way that light falls down onto the street surface. In my head, I see a fight between colors when I paint. So in the first layer, maybe i will have a little more blue and only a little yellow, but then the second layer I will have more yellow and only a little blue, and the third will be an equal mix of the two. It is like the colors are fighting each other and that is how I approach the painting that I do. Even though the subject matter I paint may be dead (cars, buildings, streets) the light is alive, it’s the glue that holds everything together. 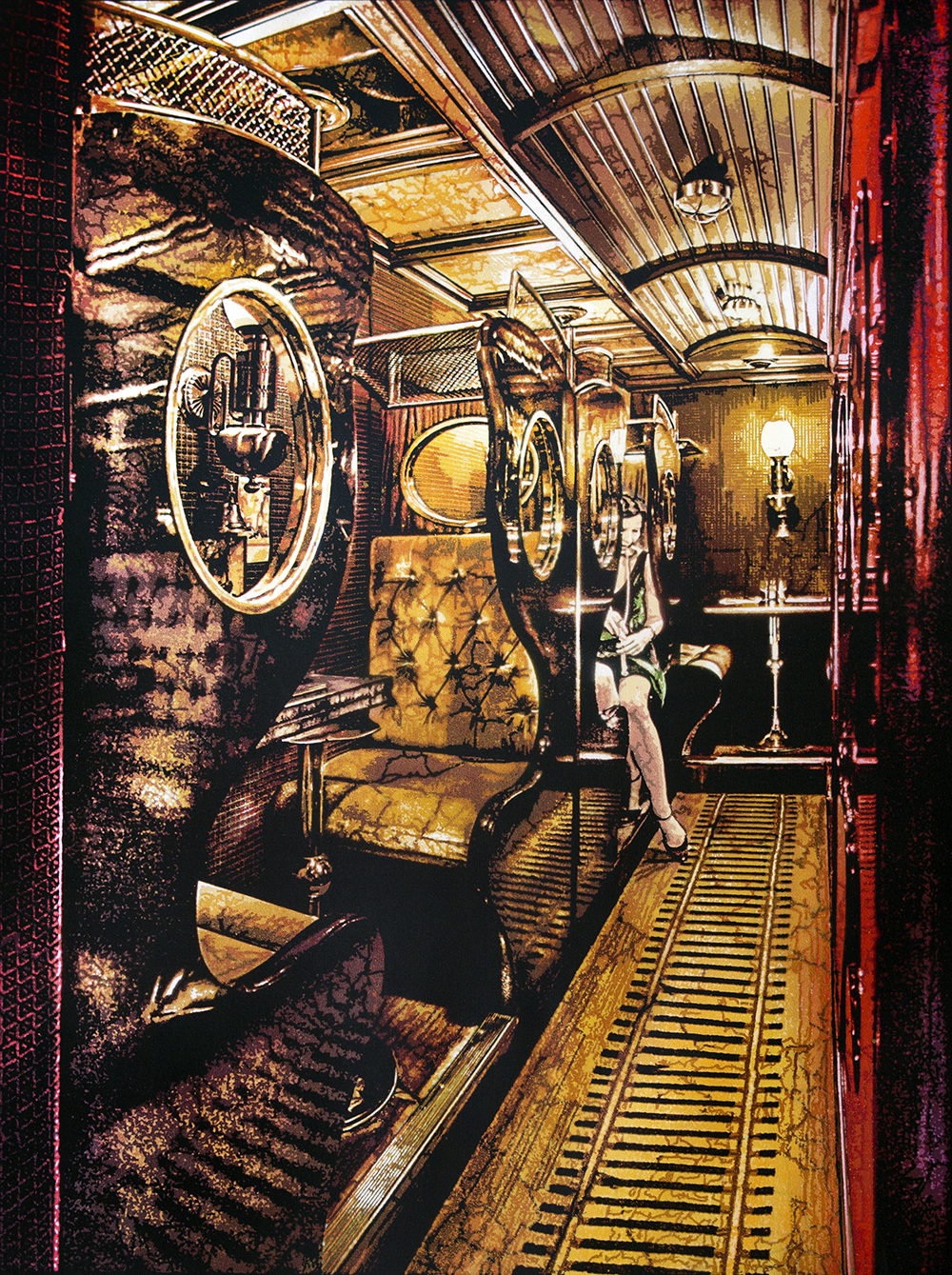 LZ: Since the 1990s, your career has progressed alongside the burgeoning of the urban art genre. How did you start out? Who are some of your contemporaries that continue to influence you 20 years later?

LH: I’ve been fortunate to have a strong network of friends and contemporaries around the world to push me creatively and to help me refine my business practice. Finding someone that is genuinely supportive of you and the path that you are on is difficult to find but essential. Artists such as Christian Guemy (C215) have been extremely supportive through providing opportunities, feedback, or just listening to me vent. We have been to Istanbul, Toronto, New York and Paris together and every time I see him, I feel energized and more driven than before I saw him. Other artists such as Joe Iurato have been instrumental for me pushing me too. We have done many collaborations together and finding ways to make the work you do fit with someone else’s vision is crucial for understanding your role as an artist. In the beginning, my largest market was in Australia and it was Rone (who was running Everfresh Studios at the time) that helped introduce me to people, welcomed me into his house, and vouched for me. In the beginning, in 1999, it was Shepard Fairey who gave me guidance and direction on what I was doing. He would let me know his thoughts and if I ever had a question he was quick with a response. Veterans like Ron English have been amazing to watch as he has continued to push forward with his art and to find new and unique opportunities for how he delivers his vision to people. Having someone like that to turn to is essential for any artist, because without it you just feel adrift in this sea of people without really feeling like you know what you are doing.

When I started in the late 90s, the term “street art” wasn’t really a thing, it was just art that was created by people who wanted their work to be seen, but who didn’t fit into any other art movement. Nobody aspired to be a street artist back then, there wasn’t really any money in it. Street art was cast offs that didn’t fit elsewhere, the same way punk rock was born. After I moved to Los Angeles, things began to click. Stenciling was big in Australia, and later London, so I connected with people like Rone, Lister, C215 and I realized it was a movement. I would just imagine that when I was alseep there was someone around the world who was working, so it pushed me to do more, work harder. Ironically, nearly 25 years after I gave up on the art world, I now feel like I am a part of it. Although I may be a stencil artist, I feel like I am more of a painter who happens to use stencils. Finding new ways to push the boundaries of stenciling has been challenging. Other artists such as C215, Joe Iurato and Chris Stain are others who continue to make the stencil medium new again and who inspire me to push myself even harder. 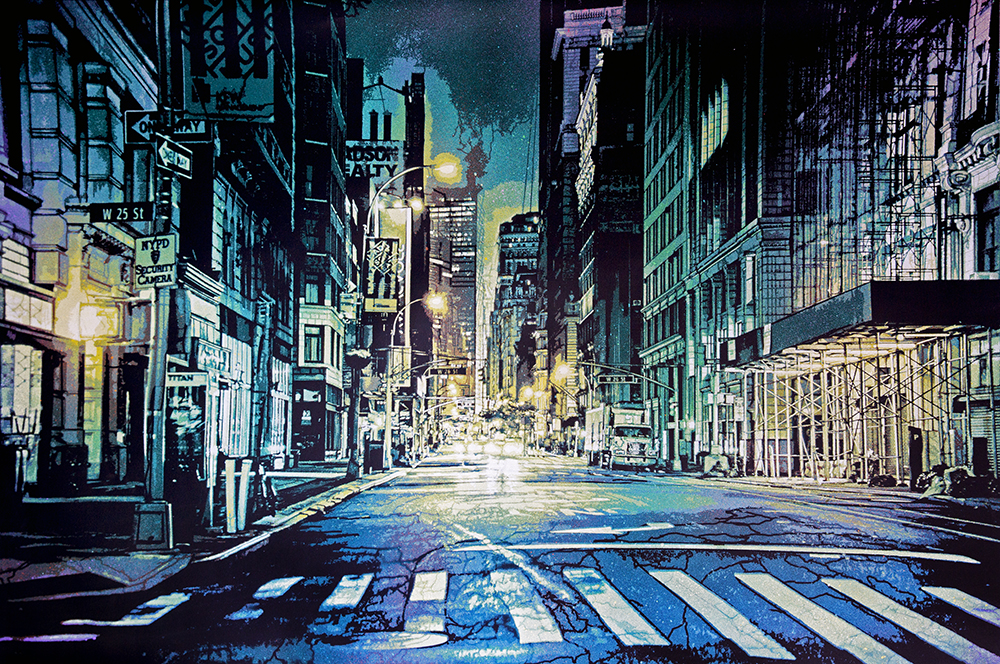 LZ: Architecture, cityscapes and urbanity are powerful and meaningful images to you. Can you tell us what you are conveying when you photograph and paint this imagery?

LH: I’ve don’t have specific meanings to my paintings, just general feelings or abstract ideas in my head. I see an empty city at night as being similar to what I imagine someone’s imagination being like. This giant landscape full of nothing, where anything is possible depending on what you add. The city is just one giant stage where it’s waiting for life to inhabit it. You look at these streets and you just imagine the thousands of people that have walked those streets, the conversations, the love that has been felt, the loss that has happened in the same location. You could position yourself at any intersection of any city and if you stayed there long enough, you will eventually experience the full range of human emotion. So when I see the city at night, with the lights raking over the buildings and cars, I feel like a voyeur who is walking around inside someone’s head as they sleep. I see it as potential. 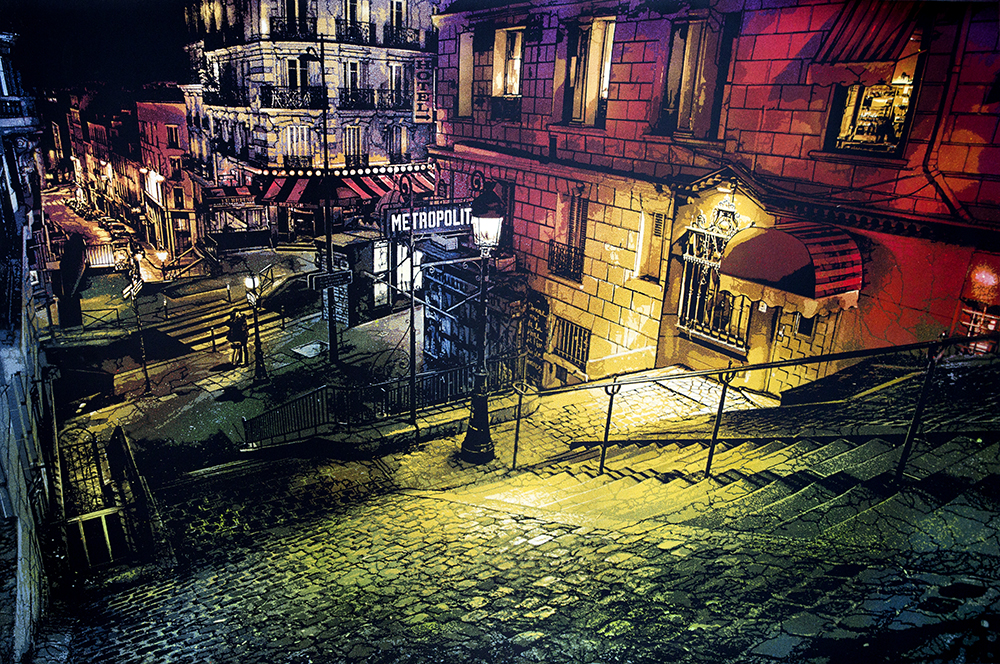 LH: New York was always the pinnacle of a “city.” Being born in the US, New York is the biggest and busiest and if you could make it in New York, you could make it anywhere. But knowing the customs of the United States, speaking English, having friends there means that you can never really see it with fresh eyes. I know too much about New York for it to be fresh. Things seem familiar even if I had not lived there. But living in Paris for the summer was different. I am not fluent in French, and that allowed me to wander through the city observing without being distracted by conversations overheard as I walk down the street. Everything I saw was new. Every place was exciting. Instead of talking to people or reading about it, the only thing I had to go on was the energy. Of course, the tourist areas are known and a basic layout of the city is known, but the smaller streets, the areas where the locals live. Those are the areas that were fun to walk down just to feel the city. 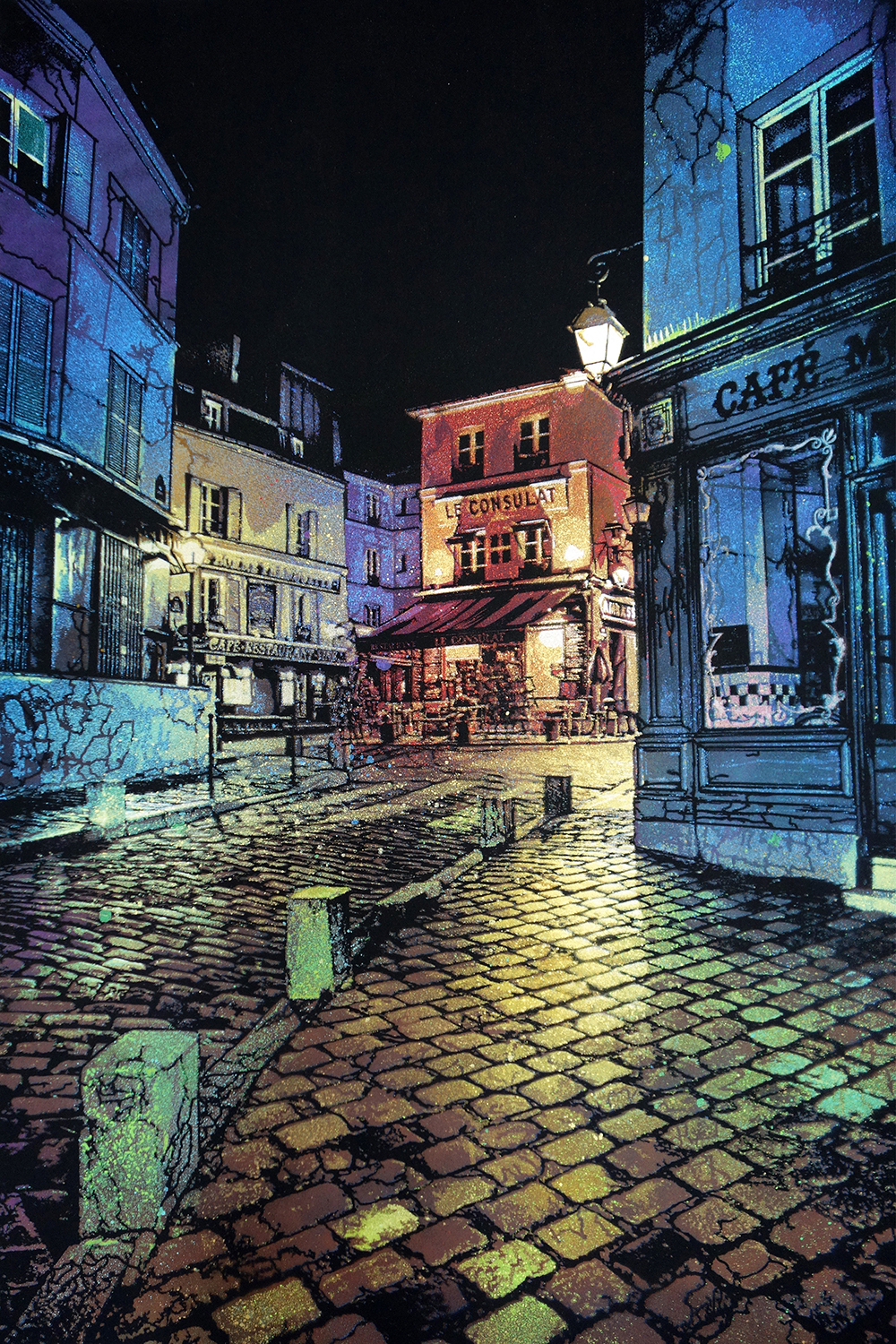 LZ: You’re currently working on one of your largest shows to date for Galerie Openspace…

LH: The show at OpenSpace is titled Nightcrawlers and Lightseekers. The title was born out of the observation that people tend to move towards light or away from it. Nobody likes twilight. Light has always been present in my work, but I like how light can also be a metaphor for knowledge, of insight, of purity, the list goes on. So as I am walking around at night, taking photos, I watch how people walk. I wonder why someone chooses to walk in the shadows, close to the buildings, instead of bathing in the light. I wonder why others are so scared of the shadows. It’s really the same battles people face with their consciousness I suppose. Not everything was meant to be illuminated. The shadows are needed for a balance. With this show, I am continuing to explore light and color within the environment. I am best known for my architectural pieces, and there are ample pieces that continue to explore those environments – from Dubai to Marrakesh to Torino to Paris and of course New York. Additionally, I have begun to do more figurative works. With the figurative pieces I am using the same ideas as the architectural pieces, but instead of going larger and trying to have an overwhelming abundance of detail, they pull back and are an exercise in simplicity. Even though the works may be different visually, I don’t see there being much difference. I see the intricacies of the cityscapes I do as being similar to the mind of the people that I am painting.